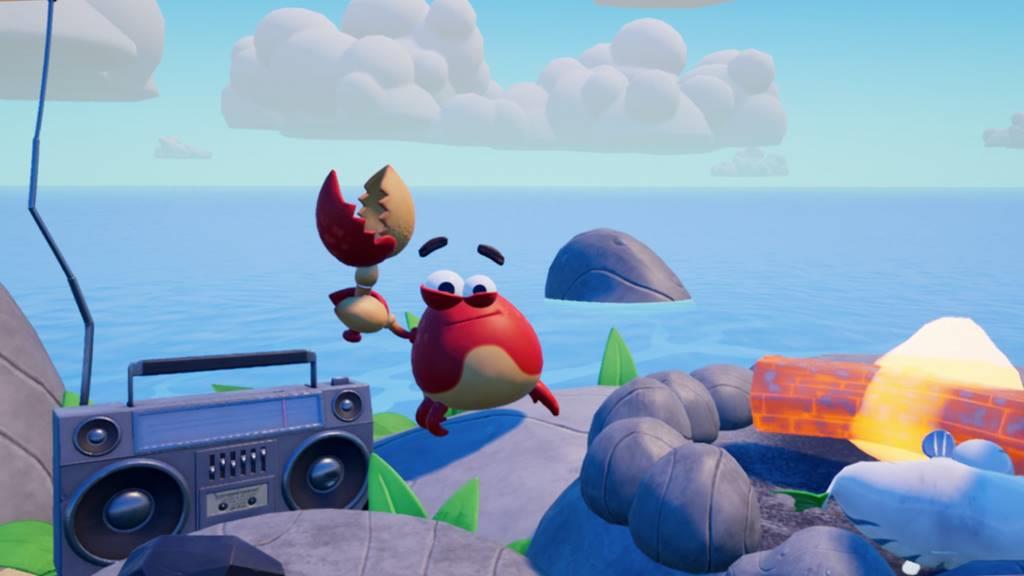 Island Time VR starts off innocuously enough. After crashing their boat off screen, players find themselves stranded on a tiny island in the middle of a sunny tropical ocean. The only company to be found is a chatty crab named Carl, who is practically trembling with excitement at the prospect of having some company. Carl offers an endless cheerful monologue, filled with advice and encouragement. He suggests that players might enjoy catching some fish to eat.

30 seconds later, the entire island is on fire, Carl is freaking out, and players are flailing around trying to thrust their burning hands into the unreachable ocean to dowse the flames encompassing them. Island Time VR is a cartoony survival sim that delights in delivering swift and hilarious death, often accompanied by deadpan criticism from Carl. This is the sort of game that streamers will goof off to, cackling with delight. The Goat Simulator crowd are going to love this thing.

However, the issue with Island Time for everyone else is that there just isn’t that much to do. Upon waking up on the island, players are presented with a few random objects. Primarily among the objects are sticks, rocks, and blocks of wood. Occasionally, a box of goodies floats up to the island to deliver supplemental goods.

By holding the provided objects adjacent to each other, you can construct simple tools. Holding a rock to a stick, for example, creates a spear. Banging two rocks together makes sparks, and anything nearby will burst into flame. More objects eventually come into play, but I don’t want to spoil them. The discovery of new objects (and how they interact) is the meat of the game, and frankly, the pickings are pretty slim.

The name of the game is survival, which basically boils down to “getting and eating food”. Players have a watch on their left arm that has a health meter that dwindles at an alarming rate. The only way to keep the meter filled is to stuff food in your face, so that becomes the main focus of each playthrough. No rescue is ever really coming, so the point of Island Time VR is to see how long you can stay alive without starving to death. 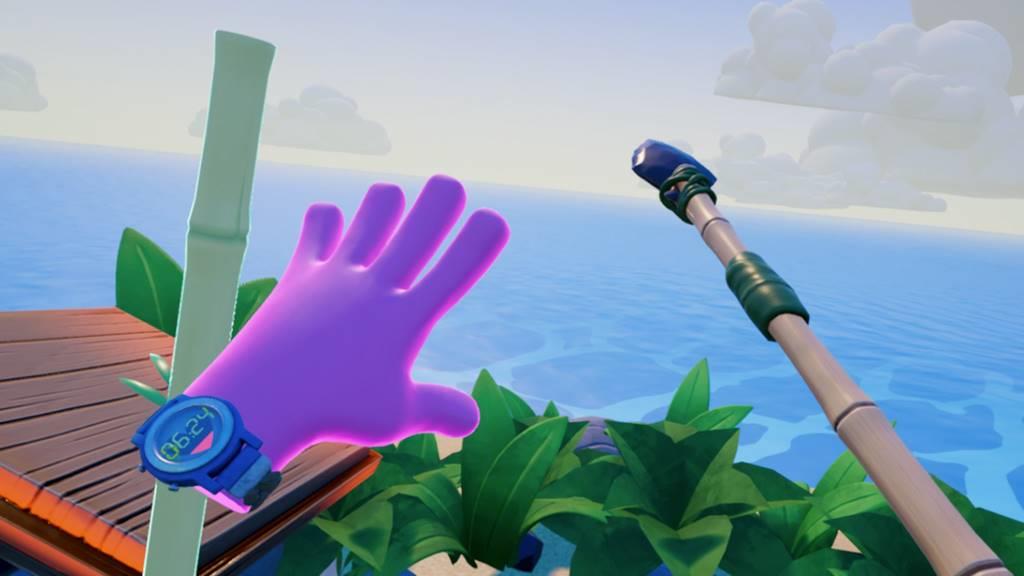 Soon after the start of the game, Carl the crab starts mumbling about how it would be good if you ate some of the fish swimming around near your feet. It doesn’t take a genius to figure out that you can set a block of wood on fire, stab a fish with the spear, and cook it near the flames. You can also spear coconuts out of a nearby tree and bang them together to crack them open, providing a light snack.

And…that’s kind of all there is. The game provides a few wrinkles as different objects show up, but the crux of the game revolves around stabbing and cooking fish, and stockpiling fish and coconuts to get through lean times.

There is a rotten bird lurking around (Carl refers to him as “Steven Seagull”, get it?). Steven Seagull likes to steal your fish, and there are a variety of ways to deal with him that offer some amusement. There are also a few other creatures that make an appearance as the minutes tick by, but they don’t do much but impede or supplement your cycle of fish and coconuts. 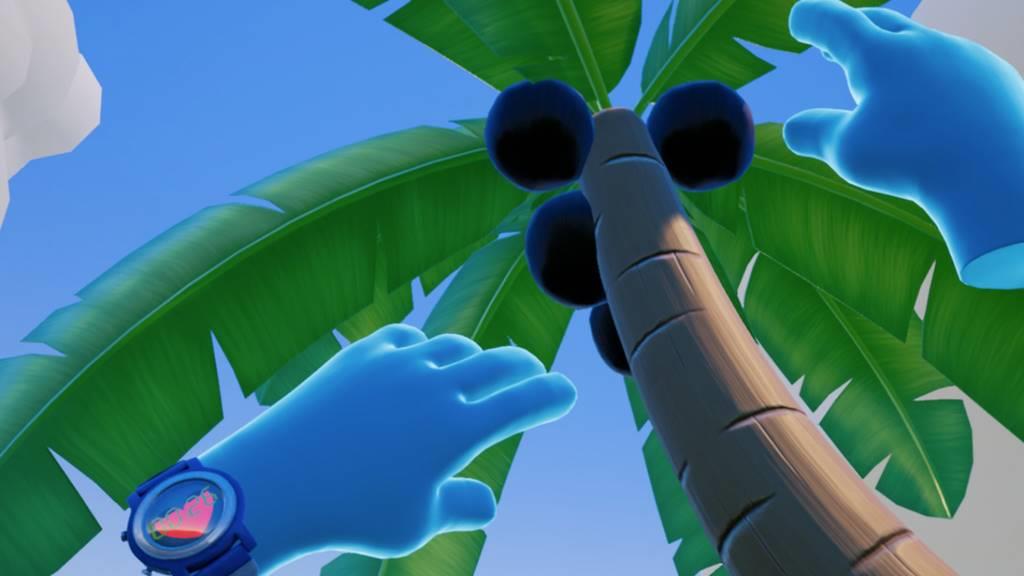 Taking a quick scroll through the achievement list reveals some ideas that might not occur to the casual player. This is definitely a game that exists to achievement-chase. In fact, the platinum trophy in the PlayStation version is called something along the lines of “You have oh-fish-ally beat the game”. What this means, of course, is that once all of the achievements/trophies have all been won, there is little driving players back to the game. I could see my 15-year-old son locking in on this game and attempting to wrestle the top spot of the leaderboards away from strangers, but alas, no such leaderboards exist.

The visuals in the game are bright and cheery, with a day/night cycle that is effectively meaningless. Carl the crab is a great character, but after playing through the opening of the game 15 times, his chatter can’t help but become repetitive. A nearby boombox plays some soothing island tunes that will quickly drive you nuts, but that can be resolved by chucking said boombox into the ocean.

The game controls reasonably well with the PlayStation Move controllers, but there are some tracking issues that occur when you start piling stuff up to hoard it/protect it from Steven Seagull. It can become difficult to distinguish what you are grabbing, and quickly dropping stuff when you pick up the wrong thing can cause items to roll into the ocean and be lost forever. This creates some flailing, which might be seen as a feature, but I just found it imprecise and a little annoying. 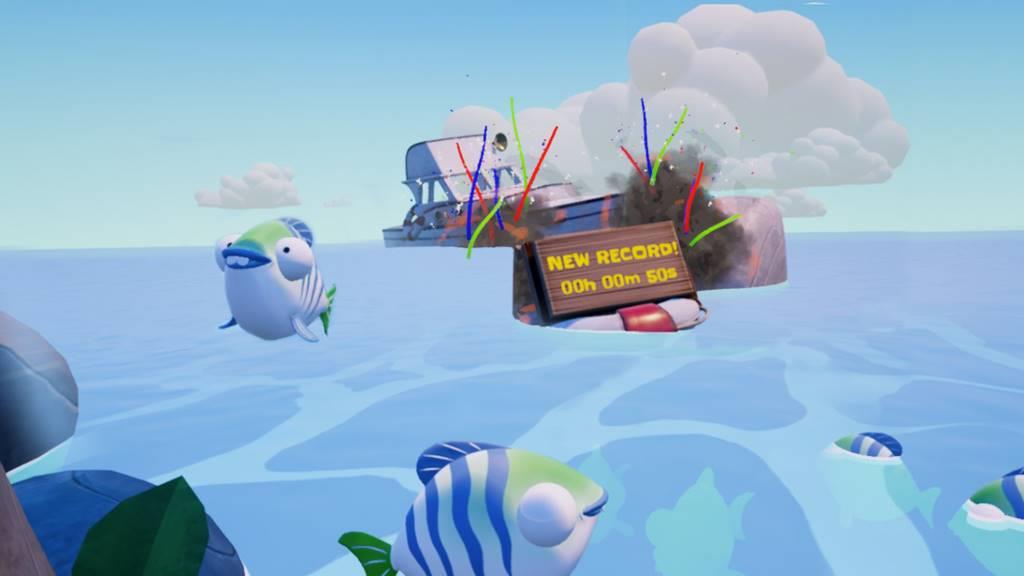 I also had a spot of difficulty plunging my burning hands into the water to put myself out. It seems to work about 30% of the time, but the rest of the time the water stays frustratingly distant, leading to a cheap (but amusing) death. In fact, all of the deaths in Island Time VR seemed cheap but amusing. I can envision teenagers playing this game for hours, mocking whoever is playing and throwing stuff at him.

Island Time VR is a bit of a quandary. What we have here is a fun little VR experience that would have been absolutely at home as a launch title when the major VR platforms released. However, the VR landscape has already moved past this sort of game, and gamers are now looking for bigger, longer VR experiences.  The price might seem right for folks looking for a short game to goof off with, but with actual full-featured launch titles now selling for 5-10 bucks, its hard to recommend Island Time VR.

Island Time VR is an enjoyable and inoffensive little diversion that I spent a few fun hours with. That said, I have a hard time recommending Island Time to anyone that isn’t spending an afternoon giggling with buddies. This is the sort of game that is fun to demo VR on a rainy day, providing entertainment while watching someone flail around. But unfortunately, there just isn’t enough gameplay present on this tiny island to engage an experienced VR player for more than a couple of short sessions.