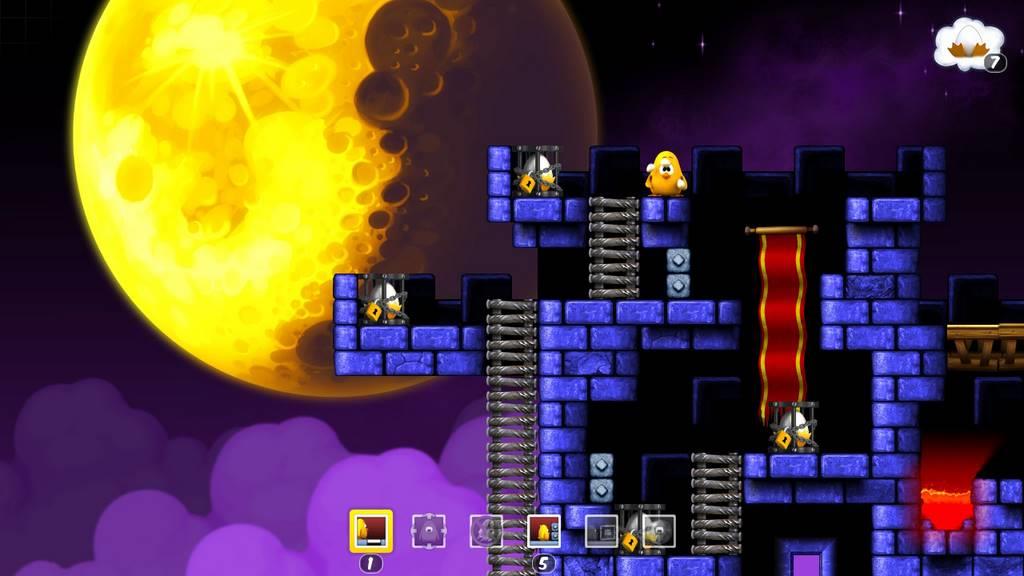 Toki Tori has been around for as far back as the Game Boy Color in September 2001.  Since then the series has seen releases on multiple computers, consoles, and mobile devices.  Overall the game has received positive reception over the years, so it’s only fitting that the game has come to the Nintendo Switch eShop.  The question now is if the Switch version is as fun as the previous entries in the series.

Toki Tori consists of five worlds with about a dozen or so levels in each.  The goal of each stage is to find and rescue an egg.  On the surface that doesn’t sound too difficult, but each stage is also filled with obstacles and hazards that Toki Tori must overcome.  The catch though is that Toki Tori can only move left and right: he can’t jump and he can’t fly, though he can climb up small ledges.  However, to compensate for this Toki Tori can use several different items throughout his journey including bridges to build across gaps, a Slug Sucker to suck up slugs, and pebbles he can toss on the ground that will grow into giant blocks he can use to cross over.  You are limited as to how many of each you can use outside of the introduction to each item, and that’s one of the good things about this game: how it introduces the items to you.

As you get introduced to an item, the first stage or two with it will let you use that item as many times as you wish to help you get acquainted with it.  After that though is when it starts to get a bit tough.  As you progress further in the game you’ll have to not only start using the items together to help you through each stage, but rather strategically as well.  When you get the slug sucker you’re told that the item isn’t used up unless you actually suck up a slug.  The stage following that you have a slug that’ll constantly be in the way unless you stand a small distance from it and barely use the Slug Sucker.  This will cause the slug to turn around and head your direction, allowing you to continue the puzzle.  Beyond that though, in the later stages if a solution seems simple enough, it likely isn’t. 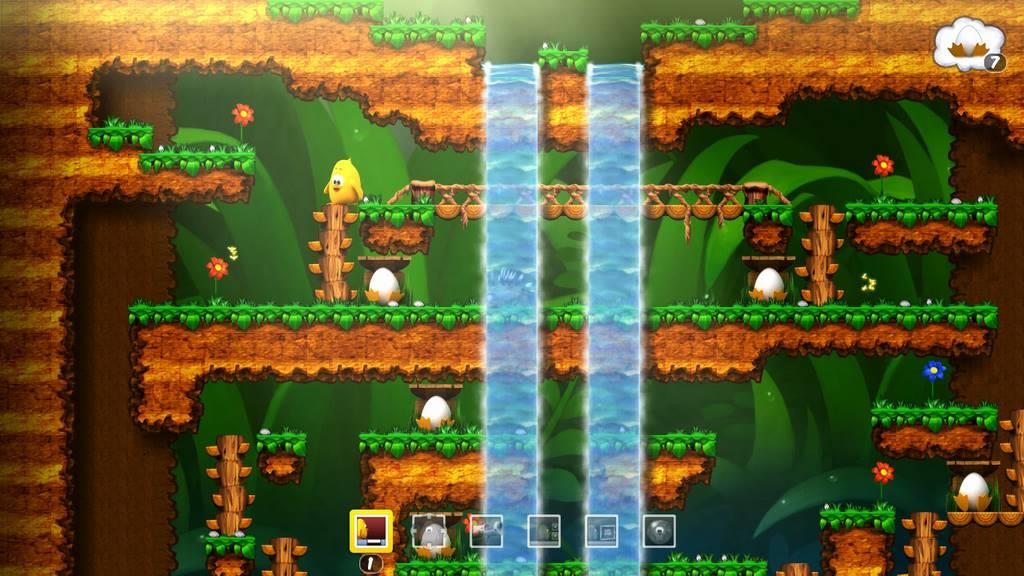 As you progress the game the stages will get more and more challenging as you have to figure out just the right solution to a puzzle to proceed.  However, you can’t proceed to the next world until you clear all of the stages in the previous world, so what happens if you get completely stuck and you can’t figure out a particular stage?  The game gives you a hand in those scenarios with the Wild Card.  Using the Wild Card will let you skip a stage and proceed to the next one, but there’s a catch: you only have one Wild Card and you can’t get it back until you clear the stage you used it on.  Honestly that’s pretty fair as there might be times where you just can’t figure out the solution to one stage, but the next few are a piece of cake.  After clearing a few of the later stages you might feel more confident to go back and complete the stage you used the Wild Card on.

If you think the game is getting a bit too easy with the normal stages, you can actually unlock several extra stages in each world.  After progressing a little ways into a world you’ll unlock a few bonus stages which are quite a bit more tricky than the normal stages.  Finishing a world entirely will open up several Hard difficulty stages which can also be a bit more tricky than the normal stages, but at times they’re actually a bit easier than the bonus stages.  These extra stages will reaffirm the theory that just because a solution looks simple, it probably isn’t. 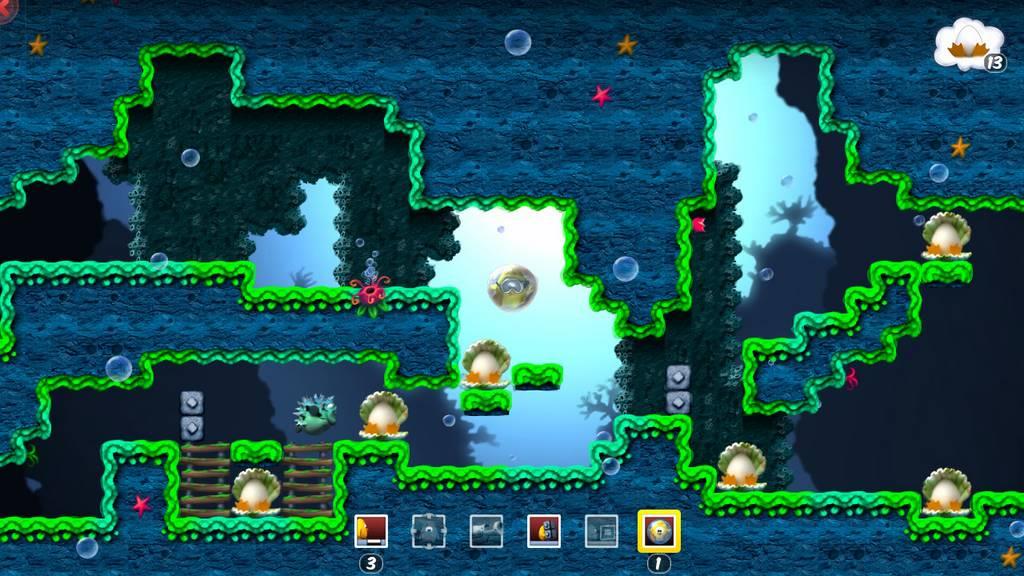 One other feature that’s very nice to have is the rewind feature.  Countless times in various puzzle games I’ve made mistakes to the point that I’ve had to restart the entire stage (The Adventures of Lolo on the NES comes to mind).  This is especially frustrating when you’re towards the end of a very tedious puzzle and you make a slightly wrong move and completely screw yourself over.  Toki Tori has a rewind feature that lets you rewind the gameplay back a few seconds at a time, even all the way back to the start of the stage.  This is very useful when using the various items you have in each stage since you’re typically limited in how many you have.  It also lets you freely experiment with item placement and usage as you can place or use items, then just back up a bit if it turns out you got the placement wrong.

When it comes to the difficulty, Toki Tori can get harder in the later worlds, but in a good way.  Sometimes a game will just ramp up the difficulty out of nowhere, or the difficulty may come from something like the controls or mechanics.  Here the difficulty feels like it increases naturally.  As stated you’ll get a stage or two with unlimited uses of a new item before getting thrown into the fray where you have to think carefully about how to use them.  If the normal stages aren’t hard enough for you, the Hard and Bonus stages should help with that as even the Hard stages in the first world can be challenging.  My only real complaint about the difficulty is that while the stages do get more and more difficult as the game progresses, a lot of those later stages still feel like they’re not that difficult.  As I was playing, never once did I even think about using the Wild Card and sometimes even forgot that I had it.  Then again I can get pretty stubborn when it comes to puzzle games and skipping stages. 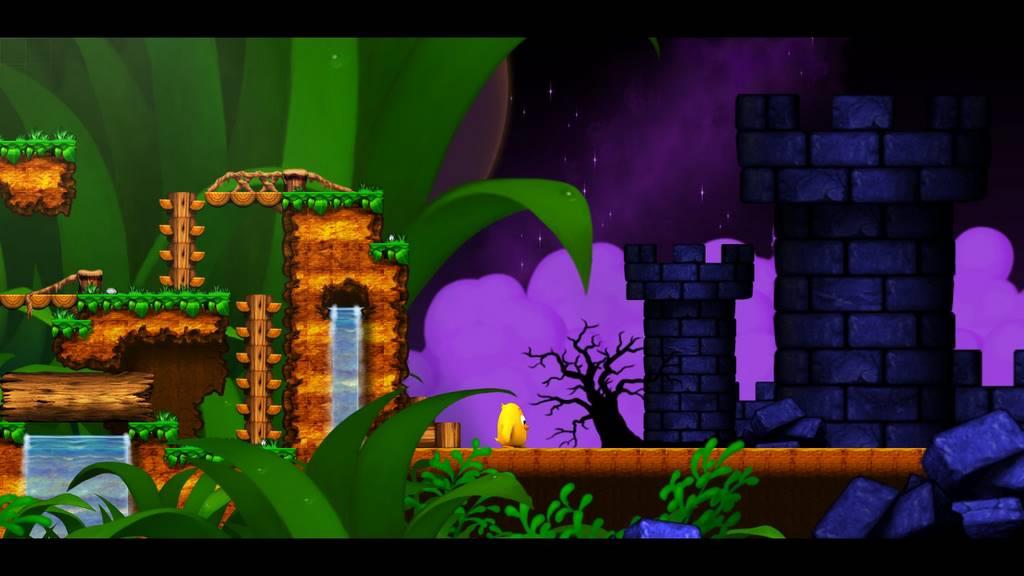 Puzzle games are great for relaxing and just taking it easy and Toki Tori is no exception.  The game is simple to control and looks and sounds great.  The difficulty progression comes naturally as the game will really make you sit and think about how to properly use your limited number of items to progress.  The rewind and wild card options are nice features for both newcomers to the series as well as veterans who might find certain stages a tad too difficult.  On top of that, the Hard and Bonus stages provide plenty of replayability for those who think the main stages are a tad too easy or just want a main challenge.  Add in the fact that you can play the game on the go with the Switch’s portable mode and this is definitely five dollars you won’t regret spending in the eShop.

Toki Tori on the Nintendo Switch is an excellent puzzle game.  The difficult progresses naturally, the puzzles themselves will make you think about solutions other than what seem obvious, and the wild card and rewind functions are great for newcomers and veterans alike.  If you have five dollars to spare, definitely give Toki Tori a shot.