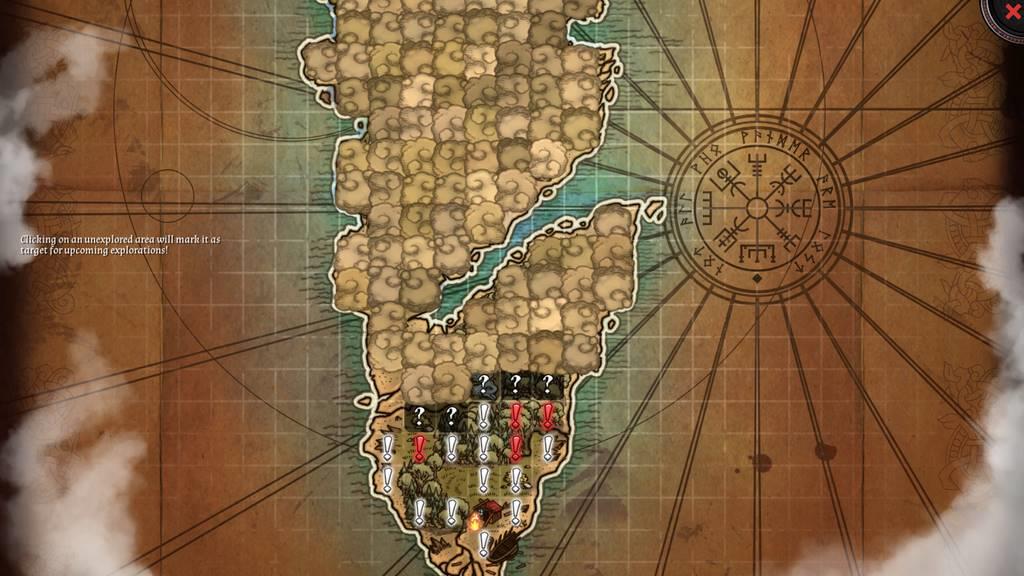 Imagine if you were trapped on an island with nothing more than a few supplies, your family, and the clothes on your back, and you had to do whatever you could to survive.  You use what you have to gather more resources, ration your food and water, stave off diseases and fatigue, and fend off any unwelcome visitors.  Hopefully that’ll never have to happen to anyone in real life.  Thankfully we have Dead in Vinland to experience all of that instead.

Dead in Vinland begins with a Viking named Eirik as he and his wife, daughter, and his wife’s sister escape after some others ended up burning down their house and exiled them.  After drifting for days going towards seemingly nowhere, a huge storm threw them towards an island seemingly out in the middle of nowhere.  After walking for a while you come across an abandoned encampment with a shelter and a couple of barrels for water.  It’s not much but it’ll have to do for now as you work to survive.  The game will actually give you several play options when you first choose a new game.  You have three levels of difficulty, the option to disable checkpoints (if the True Viking option is turned off, checkpoints occur after each segment instead of just each day), and a tutorial option that’ll walk you through your first day on the island.

Dead in Vinland works on a day-to-day basis.  Each day has three segments: morning, afternoon, and evening.  The first two segments you’ll assign the party members to do various tasks around the campsite such as explore the island, scavenge certain areas for food and supplies, and build other work stations to help produce more supplies since you can’t live off of the few you find forever.  You begin with just the four family members and you can assign each one to a certain task, but throughout the game you can find nearly a dozen more characters to have join your growing community (and kick out if they become too unbearable).  Each party member has various skills that they’re better at, so for instance if you need to explore new areas, you’ll want to assign someone who has a higher exploration rating to that task.  Tasks can include building new work stations, chopping wood, exploring new areas, harvesting, and fishing just to name a few.  After doing this in the daytime you’ll then have the chance to rearrange your party members and repeat the process for the afternoon.  After that you can do a couple more minor tasks before changing to evening where the party heads into the shelter for the night. 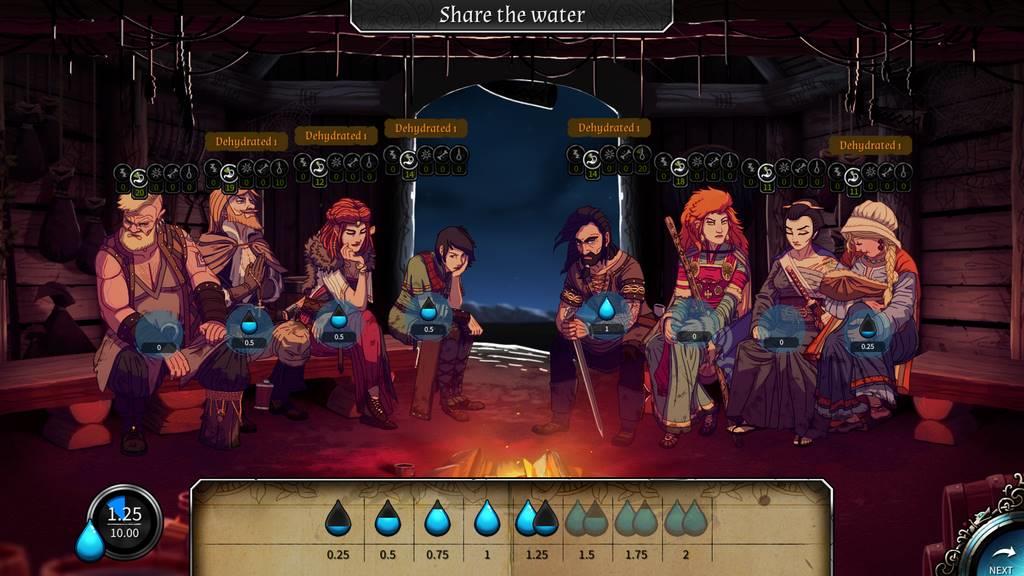 In the evening you’ll have to do a bit more resource management to help out with survival.  During the day you can gather food and water, and part of your resource management responsibilities is to build a fire and keep it going with wood.  However, you also need to boil and non-potable water into potable drinking water, which consumes fire, meaning you have to put more wood on the fire.  When you get to the evening segment you’ll divide up the water and food you have between your party members.  Water helps reduce dehydration while food reduces hunger.  Other things to watch out for are fatigue which is increased by doing work throughout the day, as well as depression which can be caused by a few different factors while you play.  However, things aren’t all bad as you’ll come across various items to help out with these stats, plus you can put the party’s relationships to work in a way.  Throughout the game you’ll have choices you can make in terms of asking questions, giving responses, or just who overall takes charge in a situation.  Depending on how you respond your relationship with the other party members could increase.

One of the challenges with Dead in Vinland is being prepared for just about anything.  For instance, while exploring you’ll start to uncover new areas to harvest and forge materials, but it’s not a guaranteed success.  As stated, each party member is good at certain skills while not so much in others.  It’s wise to use someone with a good harvesting rate to harvest materials, but that doesn’t mean it’ll always turn out good.  For instance, there was one time where I found some sap on a tree.  Tasting it lowered the hunger for the person I used in that location by a bit as well as their depression.  However, when trying to harvest it, and this person had a 66% chance to successfully harvest the sap, I failed and my depression went back up a good bit.  When assigning party members to tasks you can see the range of the results as well as any upsides or downsides.  A possible downside to exploring is that you might encounter someone else on the island and go into a combat scenario.  Some people actually have a higher encounter rate if you use them to explore.  As you progress and explore more of the island you’ll come across other people.  Some will join your party, others will be hostile and want to fight you. 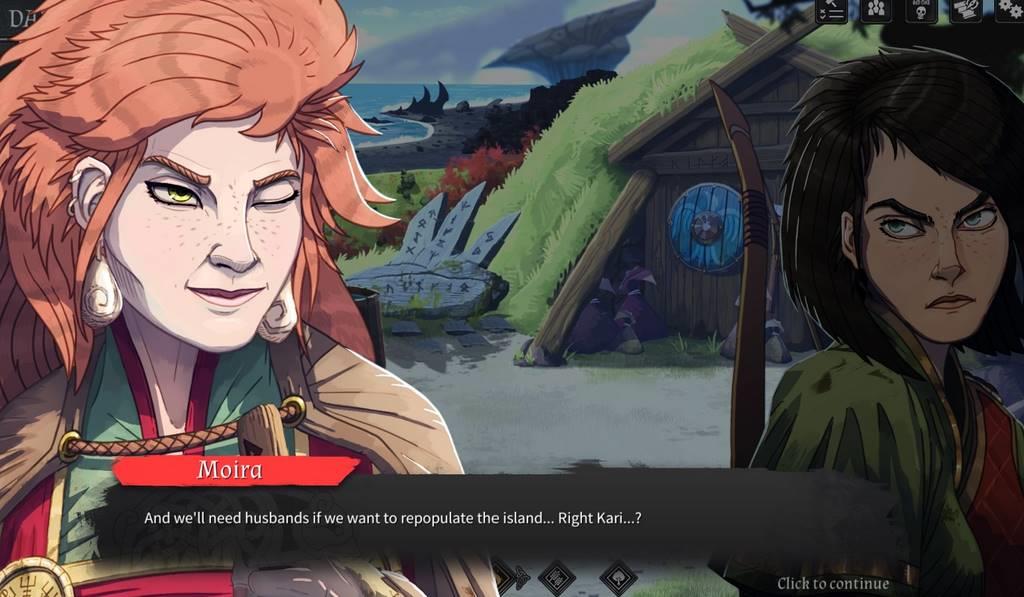 On that note, combat is pretty simple and turn-based.  Each character will have an initiative number that determines the order they can take actions in a round (characters who have the same initiative number have their order randomly decided each round).  Characters will have a certain number of action points they can use each round and several actions they can use that can affect either a melee row or a ranged row.  Each party member can also have ten red hearts as well as several white hearts.  As you take damage, the white hearts disappear first, then once you’re down to just red hearts, you’re more susceptible to wounds.  Winning a fight gives you a few supplies, but losing doesn’t necessarily mean death.  However, as your injuries worsen, you will get closer to meeting your demise.

The five stats you have to keep track of are fatigue, hunger, sickness, injury, and depression.  These will increase and decrease throughout the day depending on what you have a party member do.  Items can be used to decrease these five stats to help you live longer and other items can increase your main stats such as Strength and Stealth to help you in the long run as well.  While there are a lot of different stats that effect each character giving them their own unique traits, the five stats mentioned above are the most vital.  If any one of those five stats reaches 100, that party member dies.  Worse yet is if the party member was one of the four family members, the game is over entirely.  This makes it imperative to constantly keep an eye on those stats and not to push party members too hard.  On top of all of that, family members can level up skills as they use them and can eventually level up themselves.  Leveling up lets you choose from a list of five upgrades, but keep in mind that some might also have a drawback to them, such as increasing one stat while decreasing another.  Characters can also receive negative traits such as injuries and other health conditions.  All of these also affect a character’s skills and stats making it even more imperative that you keep an eye out on those five vital stats. 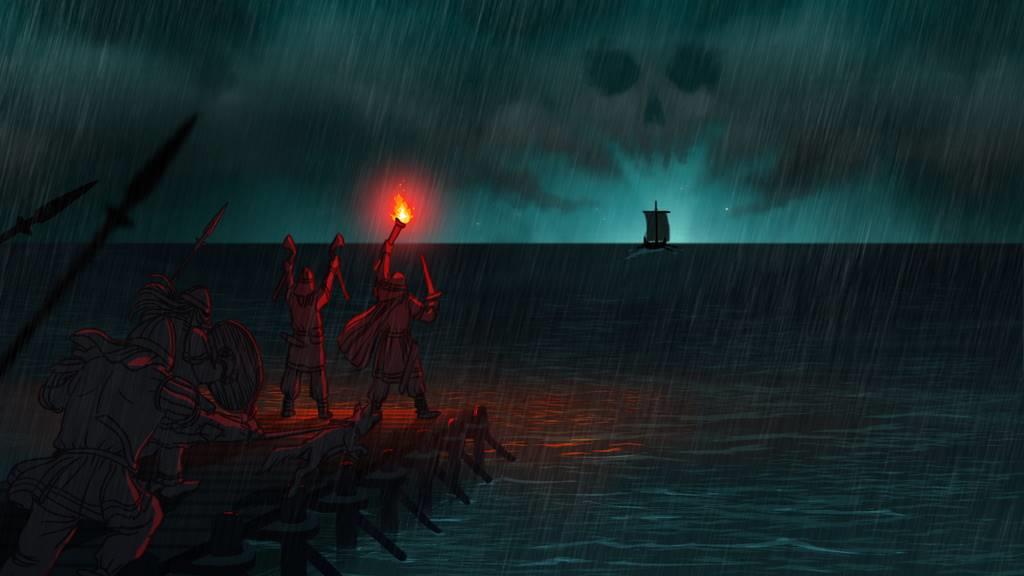 While I never played Dead in Bermuda, I actually got hooked on Dead in Vinland.  Looking up some info on Bermuda it looks like Vinland starts off a bit easier as you only have four party members to start with instead of eight, and you do have checkpoints you can take advantage of after each segment (I’m honestly not sure if Bermuda has those as well).  That way if you really mess something up you can just go back a couple of checkpoints and try something different.  Graphically and audibly speaking there’s nothing that really stands out as amazing, though I do like how the game looks (this coming from the guy who has an NES hooked up at all times).  However, there’s just so much to do and different ways to go about doing it.  Early on I got stuck needing a particular item to upgrade one of my work stations that I had no idea how to obtain after several in-game days.  I did finally come across it and also realized that there were a few other things I could have been crafting further down the list, so it was my fault and my poor decisions that lead me to be “stuck”, which I don’t mind.  If I get stuck, I want it to be because of how I played up to that point, not because of the game itself.

Dead in Vinland is a nice blend of exploration, simulation, and RPG elements where every decision matters.  Granted there are multiple paths you can take so to speak that can effect various stats, traits, and relationships, but you do have to think carefully about what you say and do and how it could affect not only that character, but the entire party.  Playing this does make me want to give Dead in Bermuda a shot someday, but for now I’m content with what we got with Dead in Vinland.

Dead in Vinland is a nice mix of RPG, simulation, and exploration elements.  With nearly a dozen party members to recruit, multiple tasks to assign people to, and many different ways to interact with the island’s inhabitants, there are multiple ways to go about playing the game and every decision you make will matter in the end.