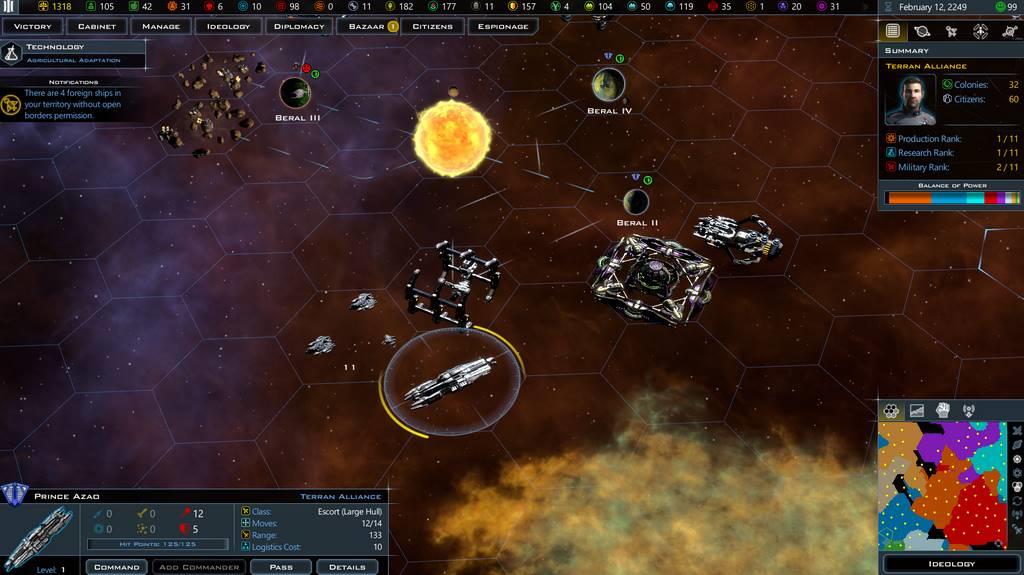 Written by Tom Bitterman on 4/11/2018 for PC
More On: Galactic Civilizations III

Galactic Civilizations III: Intrigue (GC3I) is a major version change for the franchise.  There have been DLCs and versions before this, but Intrigue is a major overhaul of the game, with several important additions.

The first visible change is an increase in the percentage of extreme planet environments, and the different ways various races are suited for them.  For example, corrosive planets are bad for synthetic races, which means that carbon-based lifeforms have the ability to settle on them without further tech, while synthetic races cannot.  The reverse is true for “bacterial” worlds.  The effect is to make the galaxy look different to different races in the early going, increasing the likelihood that individual star systems will be settled by different races and upping the possibility of border friction down the line.  It also makes the choice of what type of race to play/design that much more important.

The Bazaar has always been available from early on to scratch that specialty-ship-buying urge, but it is now joined by a market which allows the race flush with cash to buy various resources – anywhere from Elerium and Durantium to Precursor Nanites and Snuggler Colonies.  Just the ticket for a race that has been shut out of an important resource.  In addition, races that have to build population will find the ability to purchase Durantium invaluable, as there never seems to be enough and it is always in demand for other projects.  The effect of this mechanic on game balance will have to be determined through playtesting, but the more you but, the higher the price goes, so it may regulate itself.

As time goes on, your empire will go and require new, more sophisticated ways of governing itself.  The simple forms of Colonial and Interstellar Republic will have to make way for Utopian and Information Oligarchy, eventually ending in a Galactic Community (or, if you hate your people, Objectivism).  As the requisite techs are researched or Ideology points accrue, the more powerful government types will become options.  More powerful governments provide more powerful bonuses, whether to research (Technocracy provides +30%), ship construction (Infinite Jihad yields +100%), soldiering (Galactic Kingdom provides +50%) or other areas.  Some forms also bring penalties (Interstellar Plutocracy is a -1 to Diplomacy, while limiting empire size to 24 colonies).  Some forms hold elections, which can limit the sort of actions your government can take so as to win the next election cycle.  Some even forbid offensive wars.  The government mechanic definitely helps the player shape the type of game they want to play, from tech-centric to economic to warlike. 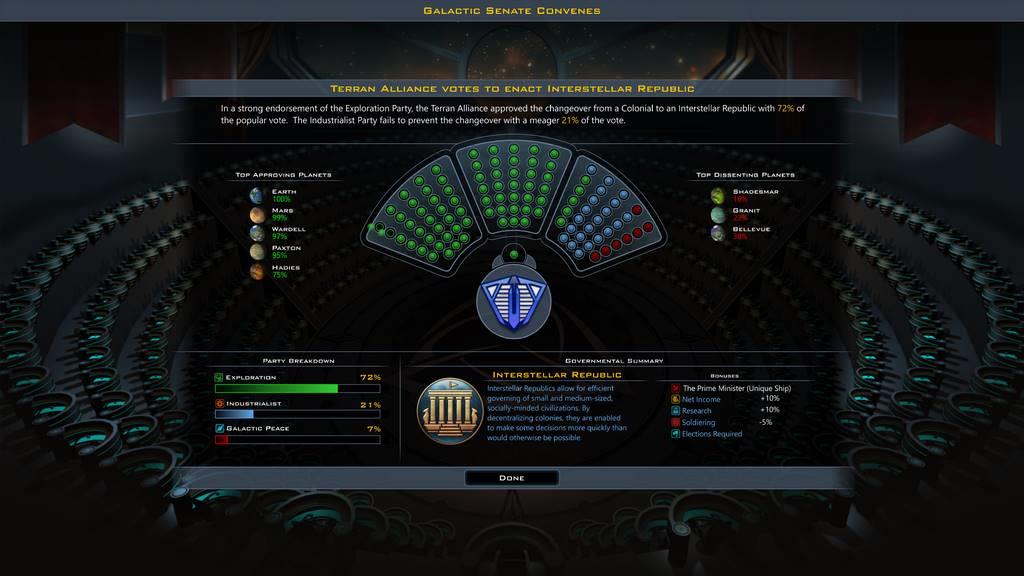 If you do end up getting too big for your government type. You can always split off some of your colonies into the own semi-independent Commonwealth.  A Commonwealth removes the selected colonies from your empire, forming a new empire that is friendly with you, and kicks back a few credits.  They tend to be handy friends in things in diplomatic circles, and can research independently (so you can trade techs with them).  Maybe not as good as having the colonies in your own empire, but a neat little way to get back within your government's colony cap, and a way to limit micromanagement in larger galaxies.

From time to time a crisis can occur.  It could be a space monster, or some revolutionaries, space pirates, or some other form of threat to your empire, or to the galaxy in general.  These are (sometimes) welcome wrenches thrown in the works that keep isolationist races from growing complacent, and can throw the best-laid expansion plans for a loop.  Your feelings on these depend on how you feel about random events, but they are manageable for the most part without completely ruining long-term planning. 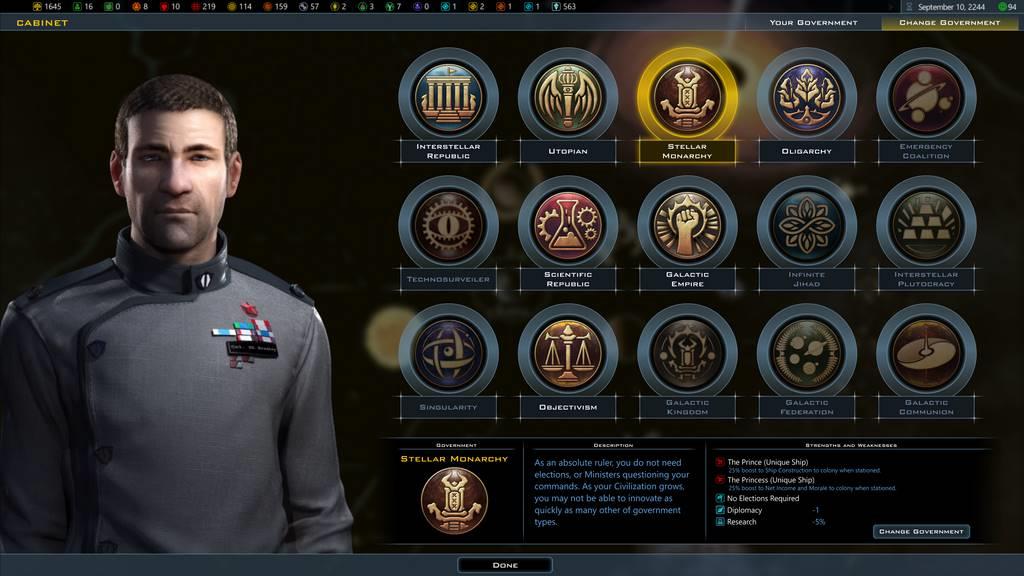 Space is a big place, and it can be hard to keep tabs on how other races are doing.  The Galactic News Network is here to help, with updates on such important news as who has the biggest fleet, or who is the most Benevolent, or most influential.  It can feel weird to be flying around in interstellar space and yet have no information about a civilization you have been trading with for hundreds of years, and the GNN is here to fill that gap.

There is a slew of other updates included as well.  Notable new features include an adjustable tax rate and arable land.  Tourism calculations have been changed to depend on how many tiles you own.  Some AI tweaks have been made, along with some changes to game balance.  The UI has been updates, along with many typo fixes.  There are certainly things this reviewer has overlooked, or has not had time to include in this review

In summary, if you like GalCiv3, you will like this version.  Even if you do not like GalCiv3, but like space-based 4X games in general, this version may be a good excuse to give it a try.  There are a lot of new features included here, and they generally do a good job of making the game better.

They make the game better.  Definitely worth picking up.