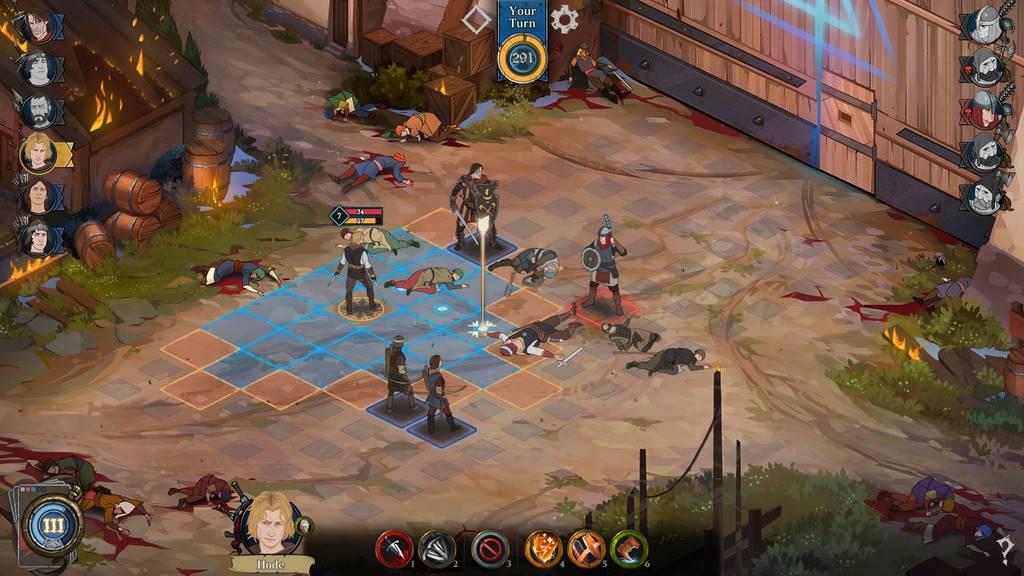 There aren’t a whole lot of tactical strategy RPGs on the market right now—at least, not many that are worth your time. Between the shameless Fire Emblem ripoffs and mobile microtransaction sinks, the genre doesn’t see a lot of quality releases. There are even fewer tactical RPGs that weave in a serpentine, Telltale-style visual novel plots and add a dash of card strategy to the combat to boot. Studio AurumDust’s Ash of Gods Redemption, which started development in 2016 and was successfully Kickstarted last year, is just such a game.

Ash of Gods presents its story as a visual novel, with a fairly lengthy opening that gives you a small taste of what’s going on and what’s at stake. A shadowy evil called the Reapers invades the kingdom of Terminum, and a handful of heroes known as the Umbra lead an army against the threat and ultimately sacrifice themselves to stop it, but one survives. This warrior monk returns years later to atone for his failure, and then the story shifts to three other characters over the course of the game. First you’ll take control of Thorn, captain of the guard for a small town, then later the wandering healer Hoper and ultimately Lo Pheng, an assassin for hire.

To say Ash of Gods has a hefty plot would be the mother of understatements. Written by novelist Sergey Malitsky, there’s a copious amount of lore to get wrapped up in here, so God help you if you get hooked on the plot because the rabbit hole goes pretty deep. In terms of gameplay, however, Ash of Gods is a pretty straightforward strategy RPG. 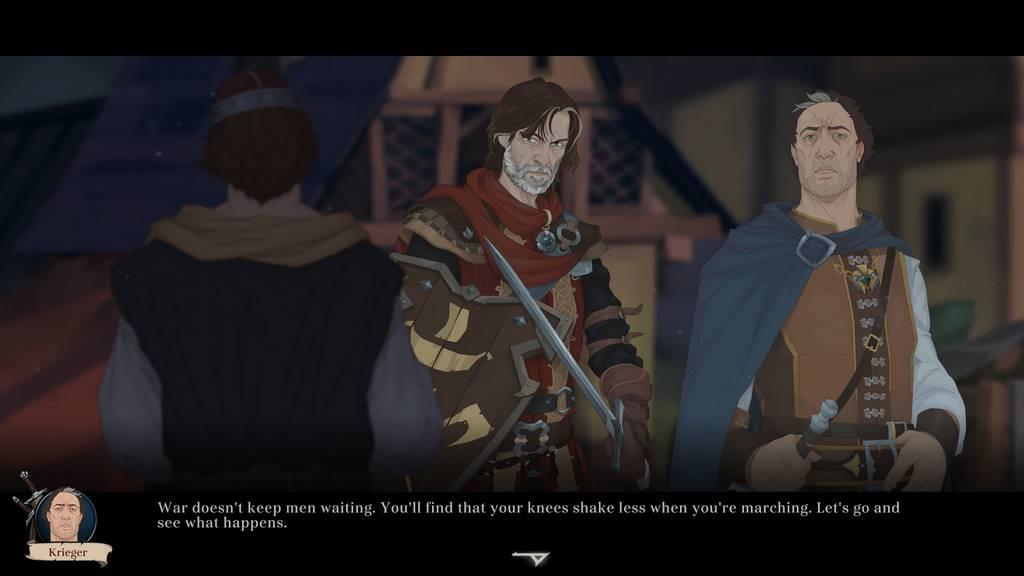 You and any allies you have along for the ride meet enemies on an isometric, tile-based battlefield. Both you and the enemies have a set “range” represented by blue squares. If you make any moves or attacks outside of that range, you expend energy, a finite resource needed for any action. If you run out of energy, you take a whopping double hit to your HP, but then again, so do the bad guys. In that respect energy is a kind of all-purpose mana and shield, so battles are more about give and take than raw power. It’s important to get your enemies to over-extend themselves because once they run out of energy, you can cut them down in short order. This pretty standard combat is augmented by a deck of spell cards, which can be used at the start of any turn but each card can only be used once per battle.

If you’ve ever played The Banner Saga then you’re probably noticing a lot of similarities here and that’s no accident. AurumDust even have a quote from Arnie Jorgensen—art director and co-owner of Banner Saga studio Stoic—on the Ash of Gods Kickstarter page. The developers clearly loved Banner’s gameplay style and wanted to make a game in that tradition, and as far as I can tell they more or less succeeded. My main issue comes with the other half of the gameplay, the visual-novel influenced questing, decision making and conversation tree. 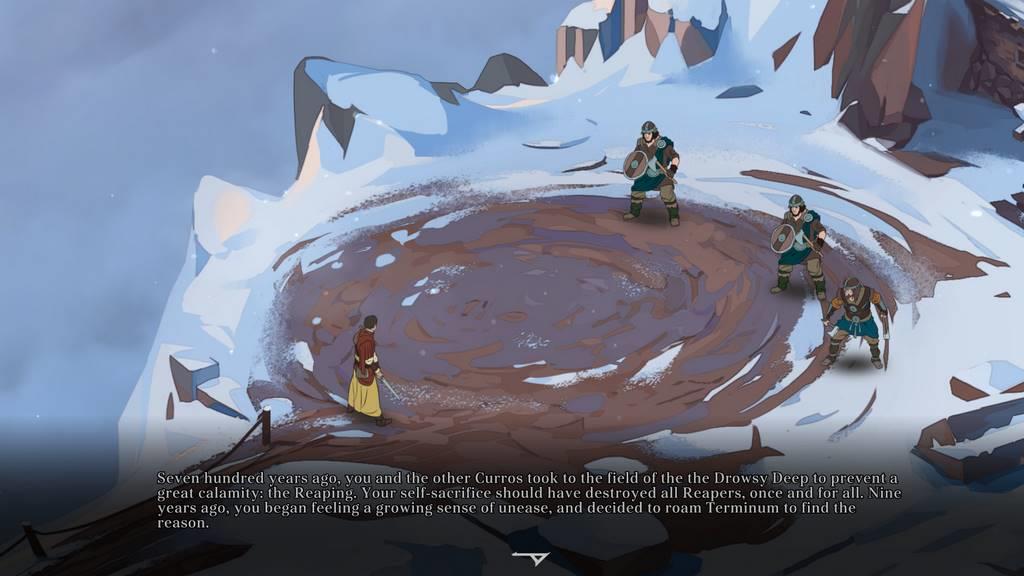 Ash of Gods has a metric ton of exposition. It’s a visual novel-RPG hybrid, so that’s a good thing, right? Well, in terms of gameplay it means that you slog through pages and pages of expository dialogue only to run up against a timed conversational choice that has long-lasting ramifications for the overarching plot and the relationships between your party members. This is all fairly typical RPG stuff on paper but Ash of Gods does an obscene amount of frontloading in nearly every plot-centered situation. This made me feel like I was constantly studying for a pop quiz that could always drop out of nowhere.

If the game had some kind of lore log or plot web or even a straight permanent transcription of all the story and conversations this would be workable, but as it stands the player is tasked with keeping a gigantic amount of plot, character and lore detail in their head, pretty much from the word-go. And I’m sorry to say but a lot of it is pretty forgettable stuff. Characters will go on tangents about cultural quirks or festivals or make obscure references to ancient legends or hell, just make small talk about what’s going on in the town market. Sprinkled within are crucial plot details, but when I finally came up against a dialogue choice it always felt needlessly vague to me. The story is so dense and labyrinthine that you’d probably need to play it through half a dozen times to see how your choices pan out in the end. 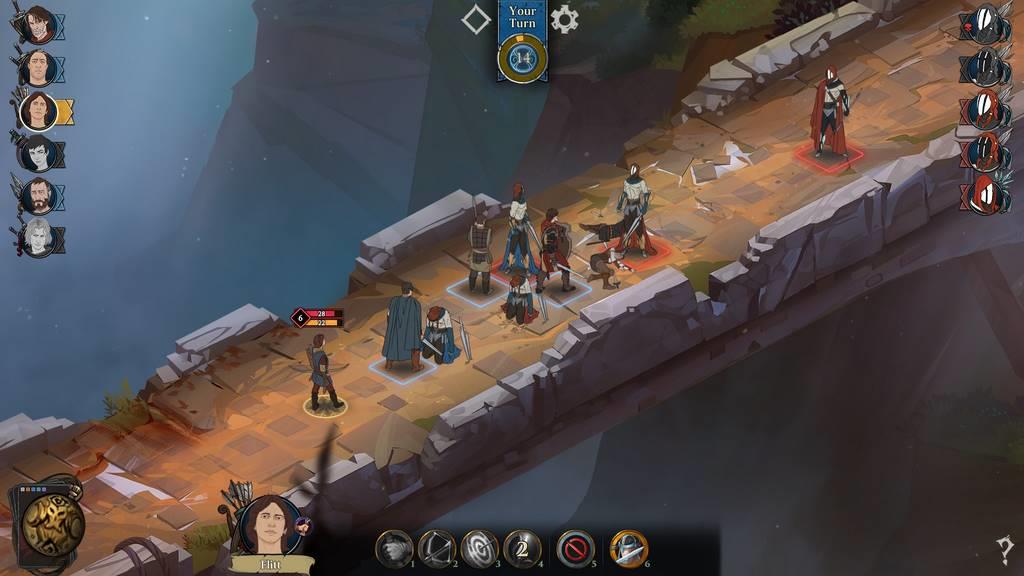 The obtuseness of the plot is annoying because Ash of Gods is otherwise really well done for a $75,000 Kickstarter project. The music is subtle and ebbs and swells at just the right moments, and although it’s fairly static, the cutscene and character art is all distinct and beautifully done. There’s a good RPG here with solid combat mechanics but it’s buried under an immense and rather obstinate story. If you don’t immediately get sucked into Ash of Gods’ extensive but admittedly obscure dark fantasy lore, you’re going to have a pretty hard time getting into the game itself.

I wish I could give this my full recommendation, but it just didn’t grab me. I wanted more of the pure gameplay but the story kept sidelining me and before long I had a tough time caring about the character relationships and which vague decisions I was supposed to make during their meandering conversations. My advice is to put some research into the general plot if you’re curious about this game. Learn what it’s about and see if the story seems intriguing or tantalizing to you. Otherwise, I would wait for a sale to pick this one up.

Ash of Gods is a solid strategy RPG with impressive production values for its modest budget, but its story and lore and incredibly dense and could make it difficult to get into the game’s visual novel elements if the plot and setting don’t immediately grab you.