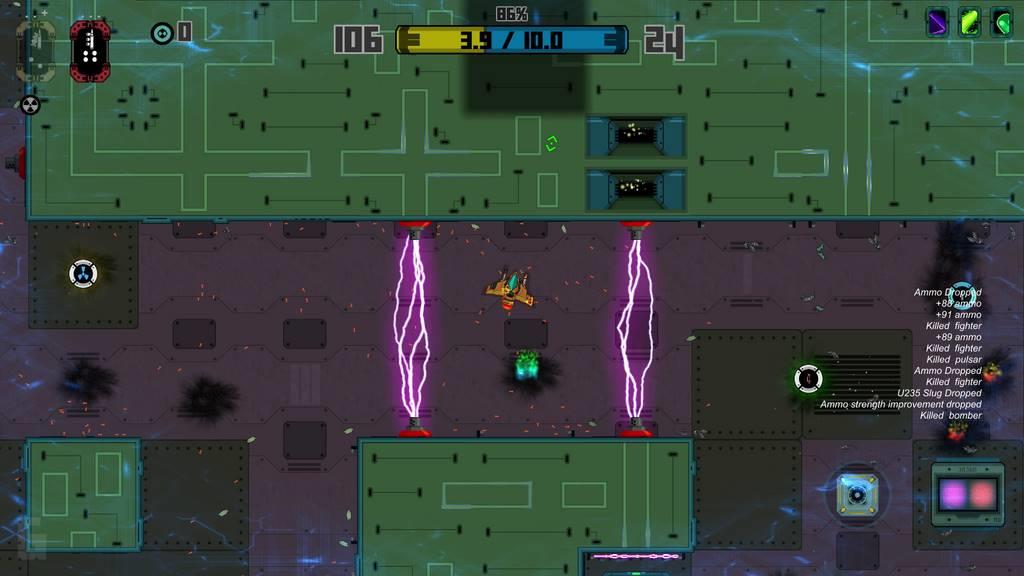 I have a penchant for 2D scrolling games. From the early days of Parsec (TI 99), and Life Force (NES), to newer games like Giana Sisters (Xbox) and Lovers in a Dangerous Spacetime (Xbox), side scrollers have been a part of my gaming life since I was able to pick up a controller. Atomic Heist looked like a fun diversion from all of the full-bore FPSs that have covered the gaming field. It was anything but.

When I first started the game up, it seemed very much like a game in the throes of testing and not a completed game. It was, however, set to go, so I entered nonetheless. As a dual-cannoned ship, the game looked as like it may have merit. Past the main screen, thing went wrong fast.

To say the game is “unforgiving” is a colossal understatement. I have not played a game this hopelessly unfair in my 30+ years of gaming. The game starts on “level 1 – engineering,” and I quickly made this my new home for some three hours. I died within 12 seconds my first try. Nine seconds my second. Going 20 or 30 seconds was a blessing from the video game gods as it was as infrequent as finding a four-leaf clover. I am not kidding that it took a ridiculous number of restarts to make it to level 2 (more on that debacle later). I finally realized there was a difficulty setting where I was able to change it from an understated "normal" to a normal-rated "easy." I can say it helped a bit, but not to the degree that I was flying though the game with ease. I never did make it past level 3.

How is this the case? Well, the game gives you very little to work with and has some of the most unfair enemies in gaming. These enemies can ram you dead, shoot exploding missiles to kill you, set off nearby dynamite to kill you, and use speed to trap you. We’re not talking the “step on a turtle and push” type of easy enemy. We’re talking armored, fast, and relentless ships with no care for carnage. All of the above seems somewhat OK until you factor in some of the cheaper issues that go along with them. 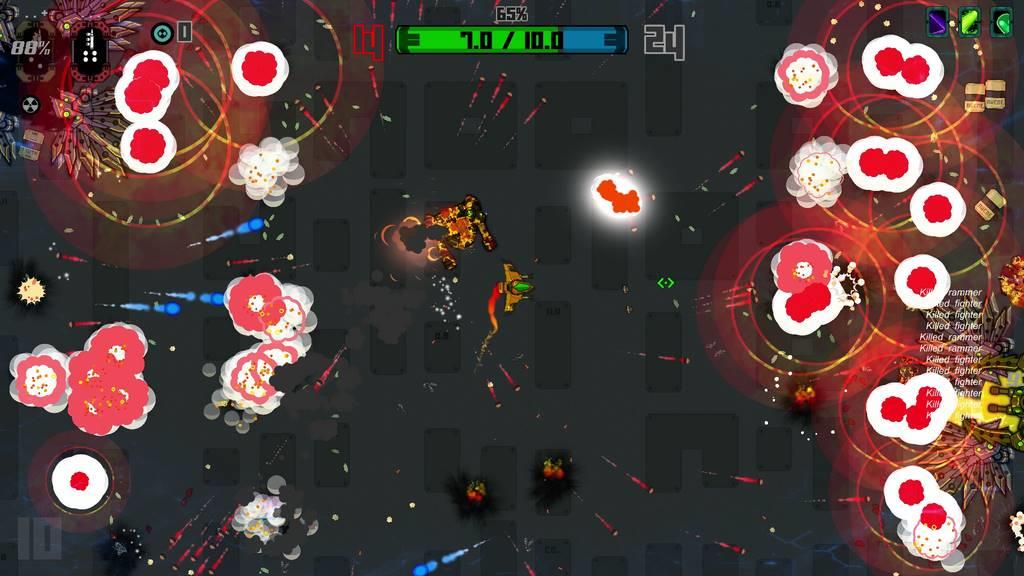 Issues like the fastest depleting health bar I’ve ever seen. Like corridors so small that you cannot go past the ship ramming you into submission. Like a lack of power-ups to help the cause. Like weapons that can end up doing less damage than you started with. Maybe the fact that any good power-up makes you lose your HUD so you cannot tell your ammo, health, or bomb amounts. And how about limited ammo? Or maybe that your own weapons can kill you sometimes with one shot? The game goes far enough that you can only have one power-up active at a time. Enough troubles? Not yet…

The game furthers the reset-madness by making the levels respawn differently every time you die. Meaning - I’ve never seen level 1 look the same twice in a set of respawns. The enemies that are there are also never the same twice. That can be an issue, since sometimes you will spawn next to two rammers and get beaten down before firing three shots. The game goes an even higher level of “just try and play this game” by resetting you to "level 1 – engineering" every time you die. Took 15 minutes to get to level 2? Sorry, back to level 1 again. Got to level 3 for the first time? Oops, got rammed dead in nine seconds – back to level 1. On top of this die-fest, you have other issues. There is no help menu of any kind. There are no instructions available to know how to upgrade, level-up, or how to use items. There is just the long line of coffins from the obscene number of attempts. 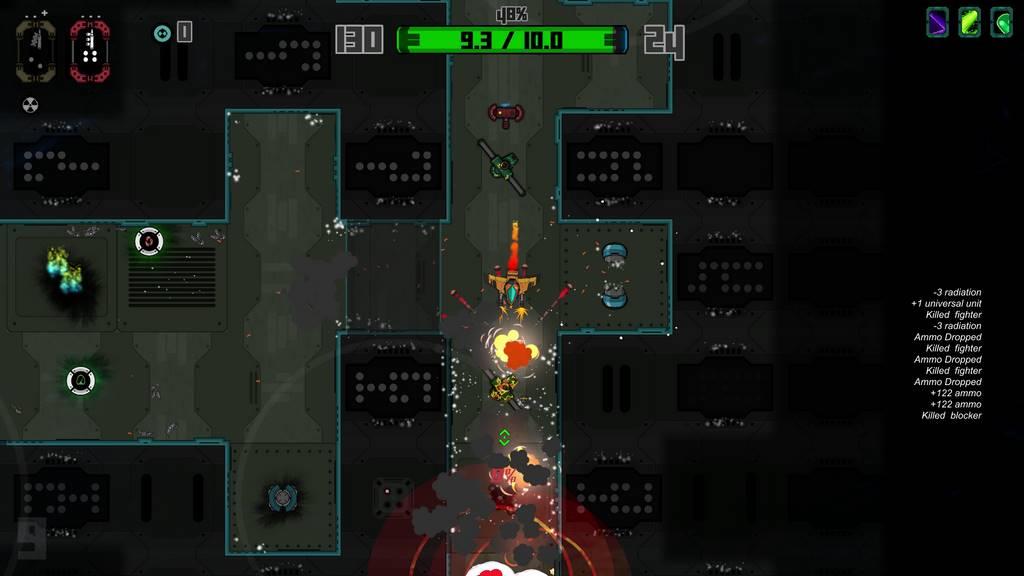 I can honestly say that the rest of the game is no better. The soundtrack is repetitive drum music and doesn’t seem to change or get better. The gunfire, explosions, and ships all sound mediocre to say the least. I think that Life Force, a 32-year-old NES game, has better sound quality, music and – to an extent – better graphics than this 2018 game.

There are no other play types available either. There is no arena-type game. There is no multiplayer or even local split-screen. There are no purchases to make the game easier or to change the ship in any way. To be truthful, there are free apps out there with 100% more substance than this game. 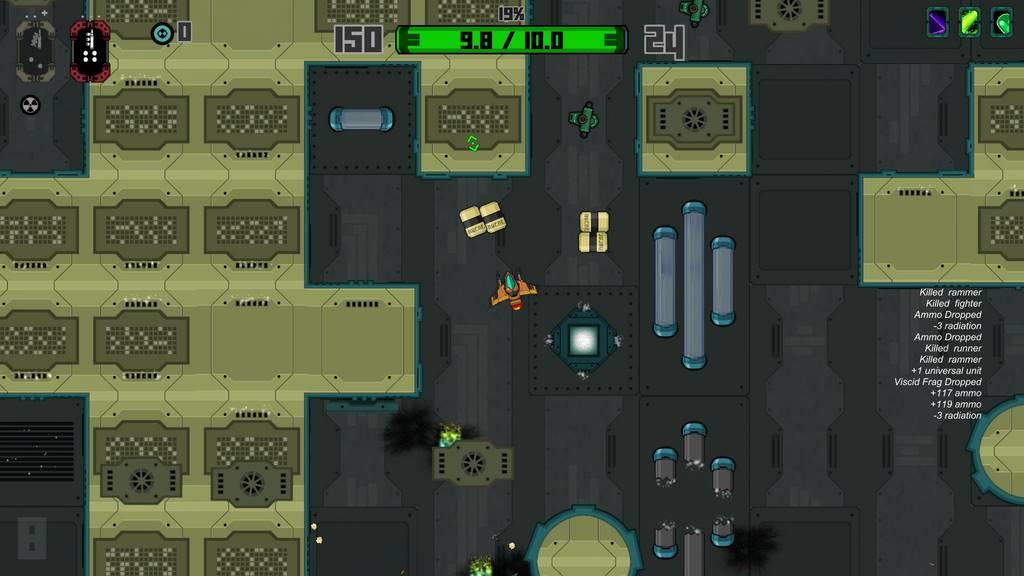 There is no way this game could be for all players either. I've been playing video games for some 30+ years and I was beaten down pretty good with this game. My son, who is 16, could do no better - even with an offering to stay up later than usual on a school night. I certainly cannot imagine this game would be playable by any kid under my son's age. I would think that all but the most dedicated of players would be drawn to this game - and even then, I can't say they would like the lack of polish the game exudes.

I wanted to get into a rhythm with the game and enjoy the homage to all the old school side-scrolling games, but instead I found a game so impossibly tough that I couldn’t even get joy out of the prospect of it being a challenge. After a while I finally gave up and decided there were better games available for frustratingly tough gameplay.

Atomic Heist is a side-scrolling action shooter in the same line as the NES game Gradius, but with a harsh difficulty level and a beta-looking design. I've never played a game this unforgiving and could not find anything - music, story, sounds, features, or graphics - to bring me to play any longer.