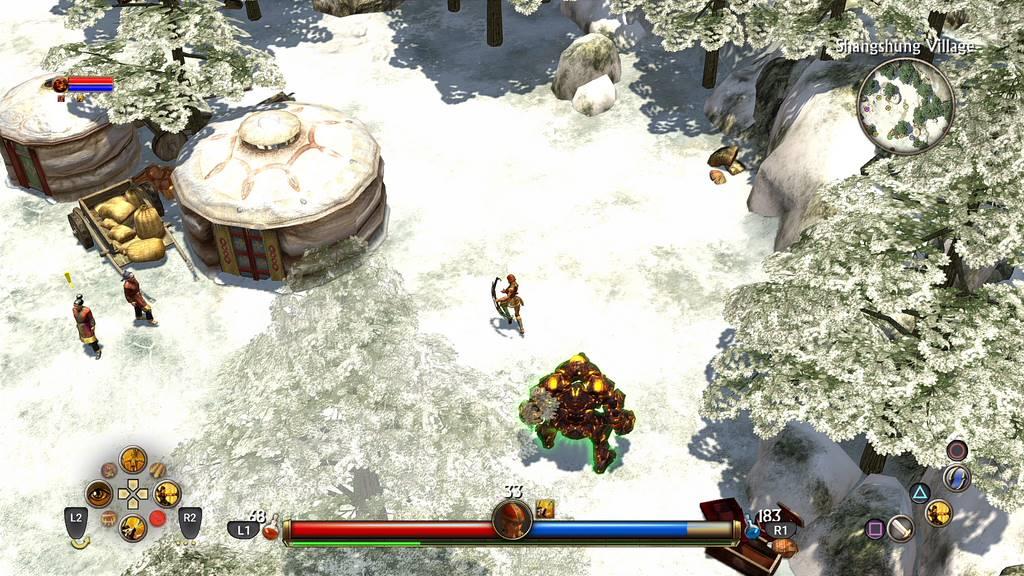 There is no game in this world that I know this well. I spent almost a year beneath the surface of the original Titan Quest. Using the creative tools, I had fashioned three full levels of gameplay with new quests, new monsters, new skins, and had a fantastic time learning the nuances of this game. With that… I had to look at the console’s newest PC conversion.

On the surface, the game looks identical to that of 2006’s launch. In fact, unless you are hundreds of hours experienced, you may not notice anything different about the game. THQ has done a phenomenal job in keeping all of the quests, details, and items as they were back then. There are some noticeable differences to the game (since it was a game played originally with a mouse), but these are reworkings for the consoles – not changes in the design of the game.

Let’s start with those changes. First, the game is much more fluid than the original thanks to the use of a controller rather than a keyboard and mouse. Second, Titan Quest used to use the keyboard numbers and a mouse for all of the different skills and attacks, and now they are integrated into the thumb-pad with a left trigger for more. This effects the inventory too and there is a whole new system for looting. All-in-all the ways of the game are still there, they are just in a new format.

The gameplay is still very much the same from the "olden days". Attack, use skills, use potions, and if all else fails – run. There are the identical warp points and the map area is moved over exactly from the PC version. You can still customize your character with whatever equipment you want and the skill trees are run the same way as well. You are able to pick 2 separate skill trees for one character, and with 8 trees, there are thousands of unique combinations. Each town still has a transport portal and the towns have the same vendors, item holders, and specialists – exactly where they have always been.

The ambiance music for each area is the same as the old game and fits well within each area’s look. I.E. - Egypt has a different tune than Rome. All do very well to not annoy though – even over many hours of play. The credit’s song is taken from the original game’s secret area and is an archaic, hard-rock song by Bang Camaro called Rock of Mages. It has been a video game favorite of mine for over a decade. 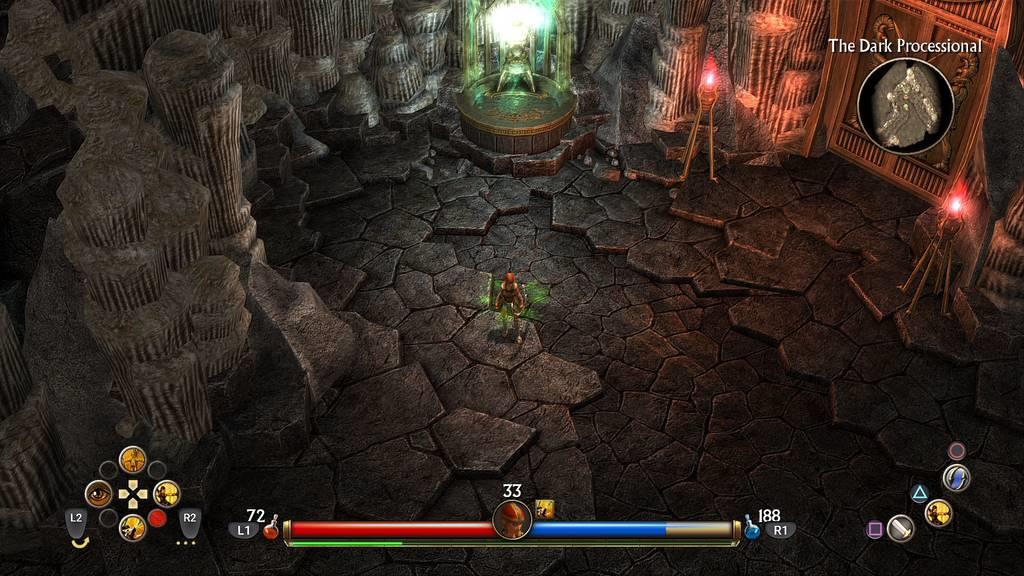 Now there have been some changes to the game that most casual players will not notice, but veterans definitely will. The difficulty of certain monsters, bosses and areas are a bit different. Some are tougher, and some are easier. An example would be the Minotaur Boss in Knossus. In the PC version, he was a terror to fight and would require players to run around the room to let his skill subside before getting in your shots. This time around, I was able to stand toe-to-toe and fight without running at all. Not saying that he would be easy to a 10th level character with no armor, but my characters are pretty standard when they get to him and this time – he was a joke.

The big change that I am just “okay” with and one that will probably give a bunch of players the heebie-jeebies, is the inability to use any type of backdoor editing of the program. What I mean is the ability to change things that PC’s had given the player access to – use of mods, keeping save files, modifying skin types, and even copying items. The original Titan Quest gave players a lot of ways to augment the characters and do a better job of changing the game beyond its parameters. An example would be creating a character where the second class was a bad match for the first. Instead of having to start over, you could have copied the save file and reloaded to use a different combination. Don’t get me wrong, I don’t mean that players should be able to turn a 5th level axe into one that does 500 points of damage (I've seen the like), but there were some tricks with experimenting that the PC version allowed and consoles do not. 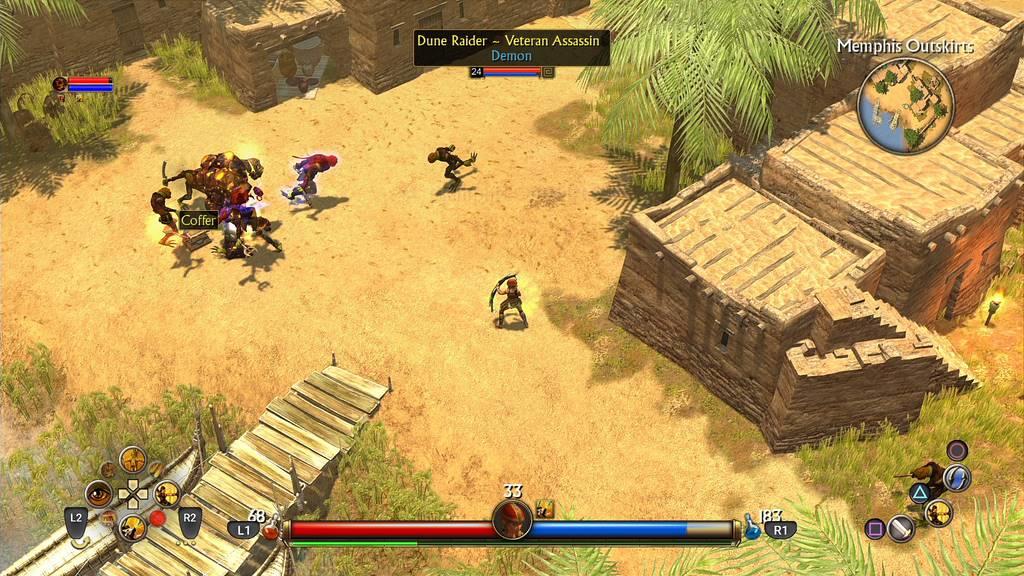 Now, as much as this is a romp down memory lane is fantastic (and with some 400 hours+ playtime, I have gobs of memories), there are some things that I assumed THQ would change. There are still the same graphic glitches and region load delays from the original game. Go through a cave entrance - see three quarters of the screen’s terrain blacked out for a second or two. Items will sometimes fall off a flat field and not be able to be picked up. Even the enemies will glitch and be unable to move, spin in circles, or roam for no reason. I thought the transfer to consoles would show a better game structure and it just doesn’t. Not that the graphics are lousy. In fact, the graphics are crisp and vibrant on the big screen – especially if you have a high-end TV. If nothing else, for me, I love playing on a screen bigger than 15”… it just seems more vivid.

There are also the item drops that can be frustrating towards gameplay. Runes are used to power all kinds of items and specifically artifacts. The game gives some artifacts early in the game, but the ability to fashion some of them can take as much time as completing three quarters of the game. The runes should be more easily dropped so their usability can be utilized much earlier. The unique and super-rare items should be a tick more available. I realize there is a second playthrough, but hoarders love to see shiny object sooner than after 6 hours.

All of the faults aside, Titan Quest has made the transition to consoles with only a slight bit of control rework and it performs a bit better than the original. It still has some of the same graphic and control flaws, but at the end of the day, the players that spent days playing the original will feel right at home tackling the same mythical enemies through the same basic story-line. Others may want to give the game the chance it originally deserved.

Titan Quest is a hack-n-slash game that captivated a great many players for over a decade. There have been thousands of mods, skill-sets, skins, and even a few full games made in its wake because of how good it was. Now on console, the game lives again. Maybe a bit too close to the flawed original, and maybe not as hack-friendly as the original, but it gives a chance for a new set of players to battle a titan… and that should be good enough for anyone.