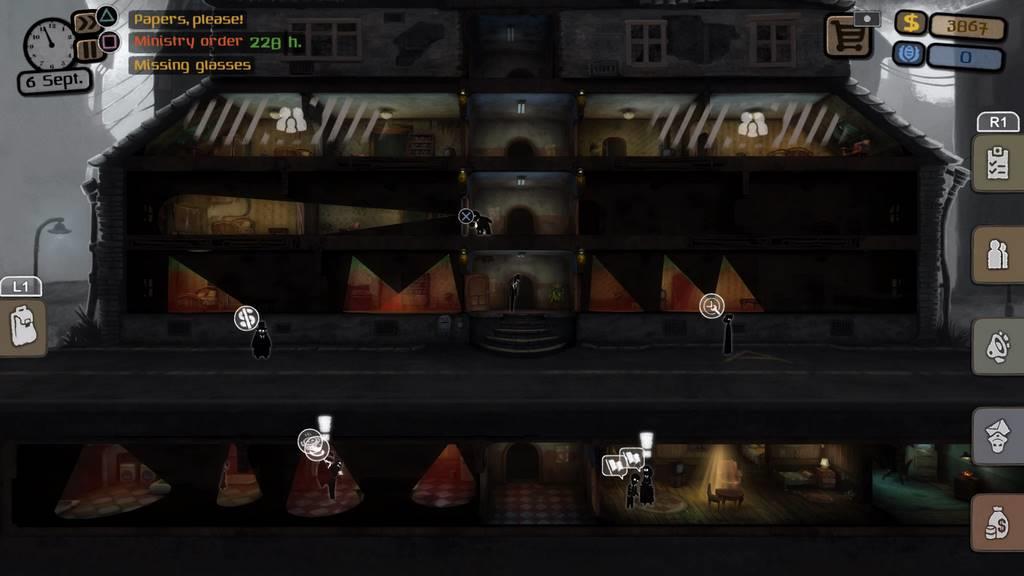 Beholder, a new totalitarianism/really-nosy-neighbor simulator from Warm Lamp Games, is an admirable game with easy-to-learn mechanics, a not-exactly-unified story that has intriguing plot threads, and enough energy to keep the player wanting to power through until the end.

Taking place in a generically totalitarian state in the mid 1980s, the player controls a landlord named Carl Stein, who is in the employ of the state. It is Carl’s official job to keep tabs on all of the tenants in his apartment. He does this by searching their dressers, tables, and wardrobes, also by placing cameras throughout their rooms. If Carl catches a tenant doing something illegal, he can write a report on them, and subsequently have them arrested. But most of the time, he will talk to them and make note of their belongings, gathering information and making reports. This is best done when the tenant is not home, obviously. If they catch you, it’s really not fun. Every time you report a tenant, some sort of consequence, long or short-term, impacts the story, giving the game an emergent aspect.

With this, the game provides a dynamic through the world, and the characters that inhabit it. Through Carl, the player gets the opportunity to know the tenants he keeps watch over. Inevitably, the human touch creates conflict with the typically inhuman feel of the totalitarian state. These seemingly random encounters and relationships are the driving force of the game. Immediately, the player is forced to consider, in a reductive sense, which is more important: Others, or their own self?

This gameplay element, while simplistic, is probably the most thoughtful and intelligent of the game’s aspects. Various plot points resolved in the beginning of the game can affect the player towards the end of the game. Even though the characters are relatively flimsy, having only a few layers of dialogue to go through in order to flesh out their personality, the writing (at least for the important characters) renders enough complexity to make the player feel something when and if they decide to sacrifice their friends’ will-being for the sake of the motherland. 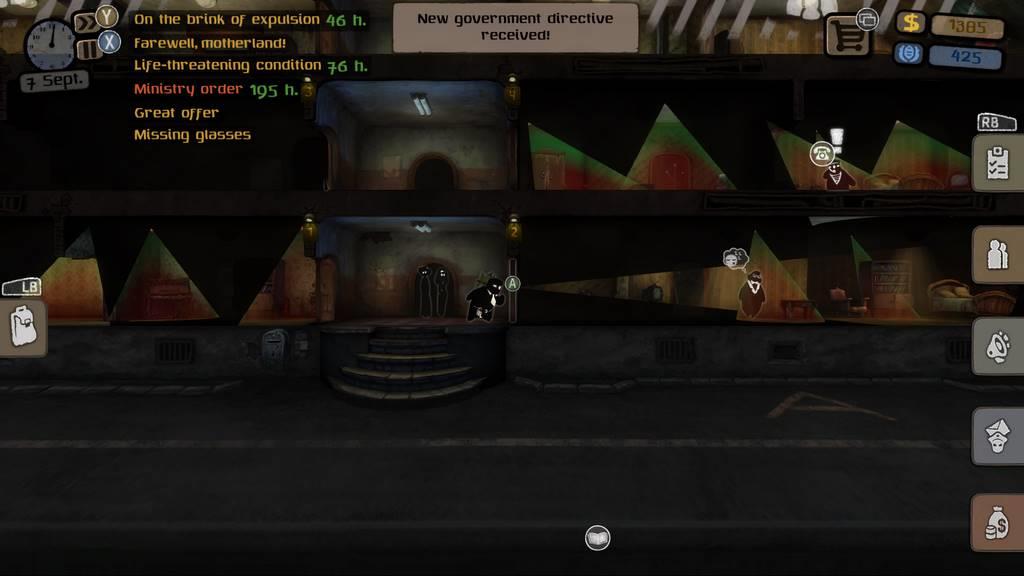 My main issue with the relationships in this game, is that they can only go so far. This point is exacerbated with Carl’s family. Accompanied by his wife, Anna; his son, Patrick; and his daughter, Martha, to his new landings, they are the players’ first emotional anchoring. When I started the game, I obliged my family their desires, whether it was textbooks for Patrick, housing comforts for Anna, or candies for Martha. It is the family dynamic, however, that first revealed the game’s hand. Everything is economics, whether through money or political clout, the most important thing that needs to make it through the game is you. This, of course, is my own opinion, formed over the course of a single playthrough, and the in-game currency happened to matter a lot (this feeds into what I think the overall message of the game is, but we’ll get into that later). There are other characters who (if you find them important) can help you out in the plight of your country’s political roller coaster, but in some form or fashion, they are more often roadblocks to your own salvation.

Again, this is also dependent on each player’s particular style of gameplay. My own playthrough was a desperate fight for survival among the political-economic intrigue of the stereotypical Eastern European housing market, so it was kind of a tough time. However, that does not mean that another player might get a better shot at keeping those around him safe. I just happened to stop caring about my family because they became a financial burden on me, so when they ended up dying (and this possibility is clearly stated in the loading screen), I did not care one bit. 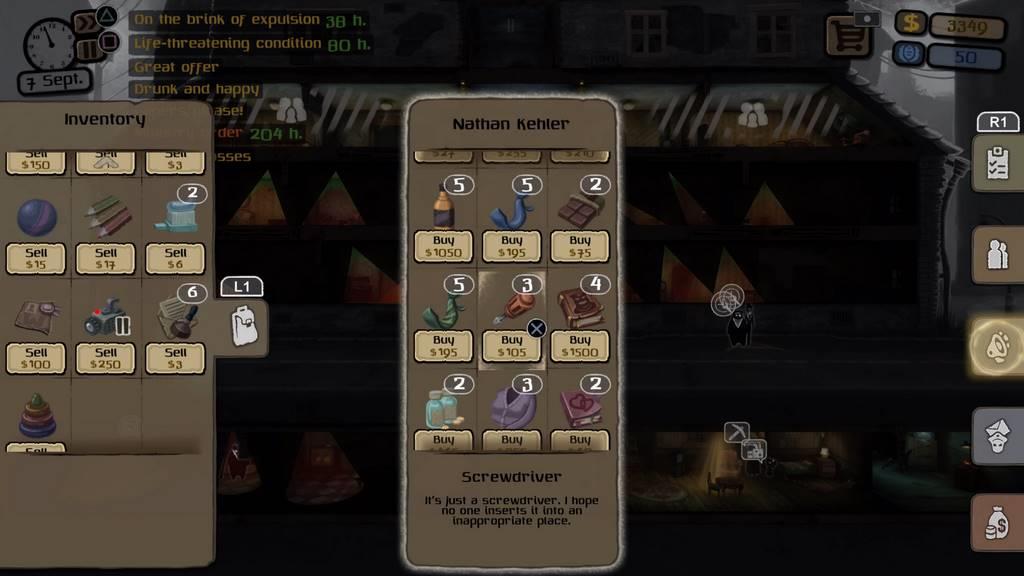 This is the god and bad thing about Beholder. Things are so hectic, whether it’s rebellious partisans wrapping you up in their plots, or the state bearing down on you, or random people asking for your help, that the game can go anywhere. It’s great because it creates a truly diverse amount of directions the player can go in, but it’s terrible because, at least in my own experience, I felt pressured to go into certain directions.

It was that last part that got me thinking about the game’s message as a whole. It’s clear that the setting for this game is inspired by the collapse of various Soviet satellites at the end of the Cold War, as well as novels by Aldous Huxley, George Orwell, and Ray Bradbury. It completely makes sense, then, why this game is so anti-totalitarian, but it begs a couple questions: What, specifically, is the government of the Carl’s state? And by extension, what is the game trying to say? The type of government doesn’t exactly matter in the long run, ut not knowing whether we were in a socialist, communist, or Marxist system takes a nuance away from the game that could have lent it some much-needed food for thought. On the flip side though, not knowing details of the higher echelons of government immerses the player even more in the chaos, and lends a sense of realism and a touch of personal storytelling to the individual experience, and it is that part that makes the game memorable. 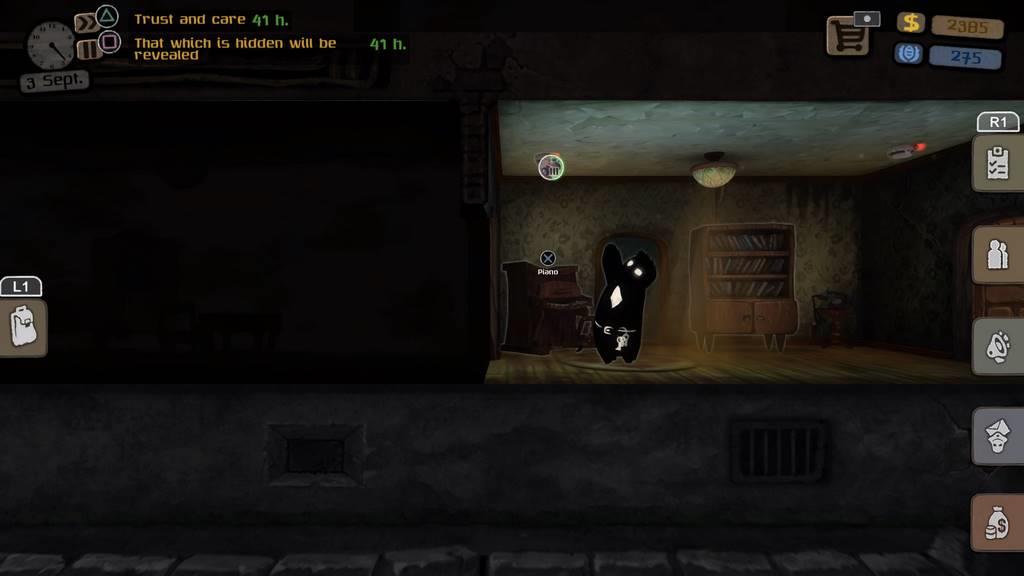 But I kept having to ask myself, what is the game trying to say about totalitarianism, or countries where the state has an immense amount of control? Obviously, there is the evidence of failed experiments around the world, as well as authors like Orwell’s legitimate fears about totalitarian states arising in their home countries. But something about the setting made the game a bit of a tried retread of general propaganda peddled by people who usually don’t know what they’re talking about. I understood that, by the end, the game’s statement was that living comfortably in a totalitarian state is impossible, but what about other governments that derived not from the far-left of the spectrum, but the far right? What if the game wasn’t derived from Stalin, but from Pinochet? These are my own thoughts, and these wonderings don’t detract from my opinion of the game, but I personally get tired of how often Eastern-sponsored totalitarian states are painted as the worst of the worst. What about the many times that the West has ruined countries for the sake of their (the West’s) own political benefit, like the assassination of Lumumba in the Democratic Republic of the Congo? Just a thought.

I experienced a lot of frustration through my time with this game. From the mechanics and story directions seemingly cornering and forcing my hand in situations where much more time would have been appreciated, to the many times my gameplay experience ended prematurely. Abut I also felt something, whether it was the people I kept watch over, or the minimal power I held, or that power which was held over me. Even with the minimalist-directed art style to the somewhat featureless characters, I felt that this world, and the people who inhabited it, were real.

Truly, Beholder has surprises that impact the player in positive and negative ways. It leads me to wonder whether this was the developer’s true intention. Can you really make living in a totalitarian state fun? Sure, the realism can kill the fun of the gameplay, but it left me with a lingering feeling. In a game like Beholder, how much are we willing to sacrifice?

I've never played this type of game before, and although I didn't necessarily enjoy every single minute of gameplay, it's memorable for the ideas it presents, and the different ways in which it plays out.