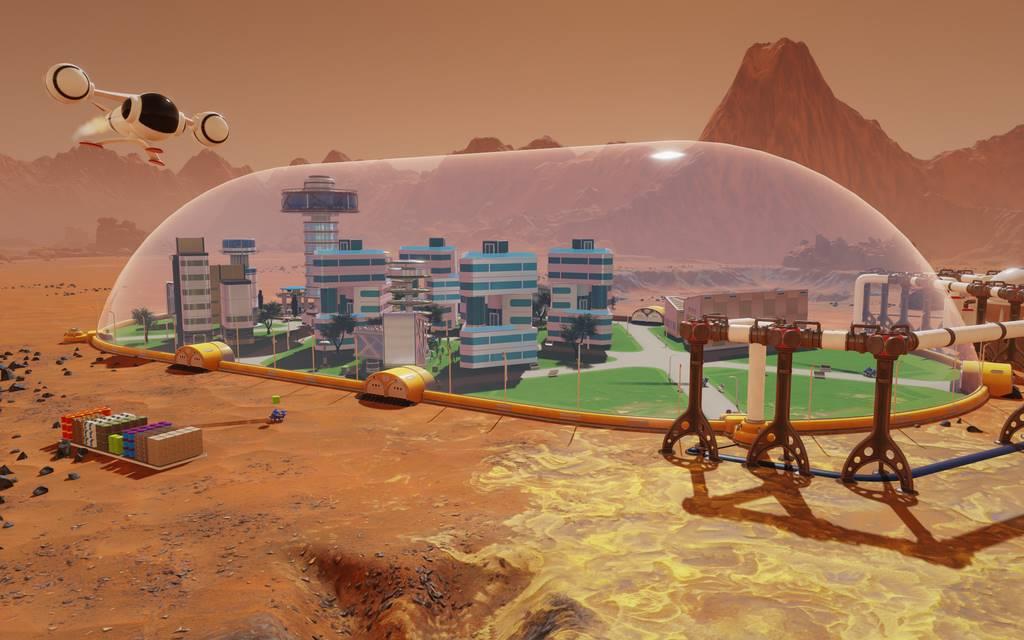 I have been sitting on my review of Surviving Mars on PlayStation 4 for a week or two now. Partially because I haven’t had time to write it, but mostly because I haven’t been able to figure out what I want to write. Surviving Mars is an interesting game with pretty visuals, a killer soundtrack, and tons of options. But if I weren’t playing it for review, I would have absolutely bounced off of it after the first 90 minutes and never touched it again.

I was very excited to play Surviving Mars. In fact, I sought out the review. I had been following the game through its development, and I loved the tone of the trailers. The fun, slightly retro-futuristic vibe on display sold me on the idea of trying to sustain a colony on Mars against the elements. I was all prepared to lead a group of intrepid explorers in a quest to hold our own against meteor showers and possible alien incursion.

What I found instead was an overwhelming quagmire of options and functions, with no explanation whatsoever as to what was expected of me or how anything worked. This is a game that wants you to learn by failing. Unfortunately, when a failed game can take hours, I just don’t have time or patience for all of that. I’m a grown adult in the modern age, and while I don’t expect things to be 100% spelled out for me, I do ask that a product I have purchased give me more than a cursory explanation as to how to use it.

Allow me to explain. Booting up Surviving Mars, players are asked to make a lot of uneducated guesses right out of the gate. Which science-fiction-future sponsor would you like to fund your expedition? What sort of mission commander would you like to run the show? What would you like the “mystery” (typically unexplained phenomena that appears late in the game) to be? Each of these is outlined with the briefest of blurbs detailing bonuses and penalties, without really delving in to how the player’s selections might change gameplay.

Players are then asked to specify what they would like to take on their first rocket to start building their colony. There are maybe 20 options, ranging from pre-fabricated building kits to raw construction materials. There are larger, rover-style vehicles, and smaller drones, used for material gathering and building tasks. The game gives players no indication as to what might be useful. It just lets you pick some crap and shoot it on a missile to Mars. So fine. I made a few guesses at to the types of items that might be helpful and launched my first mission. 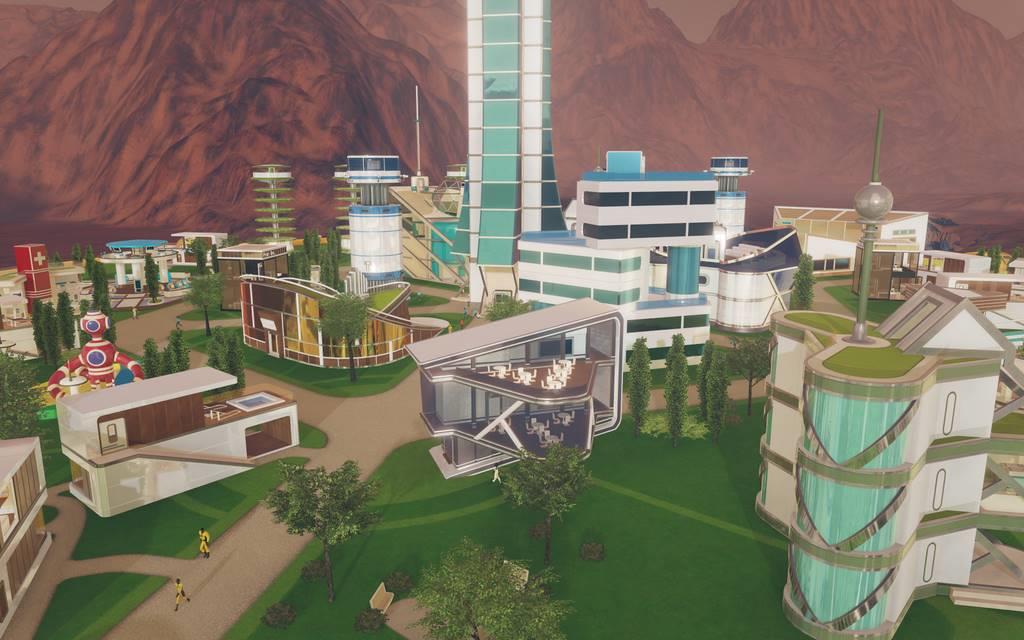 Your next uninformed decision involves where to land on the planet. There are a few meters that appear indicating whether areas might be rich in certain resources, and whether they might be susceptible to particular disasters, but these meters are very surface level.

The next thing you know, you are selecting a specific place within your landing zone to land your rocket. What makes one place better than another? Who knows! Your rocket lands, your drones roll out and start unloading stuff, and then the game gets down to the serious business of completely ignoring you and your problems. The player is given an interface with at least 40 items that can be built, another menu to assign research, another menu to determine which areas of the surrounding terrain to scan, and on and on and on.

Then the game suggests that you might like to have a place to store excess electricity. So fine, I build a storage unit. Oops! You have to link them together with cables. The game doesn’t tell you that outright, but it is clear enough from the icons that appear and bounce endlessly above each structure. 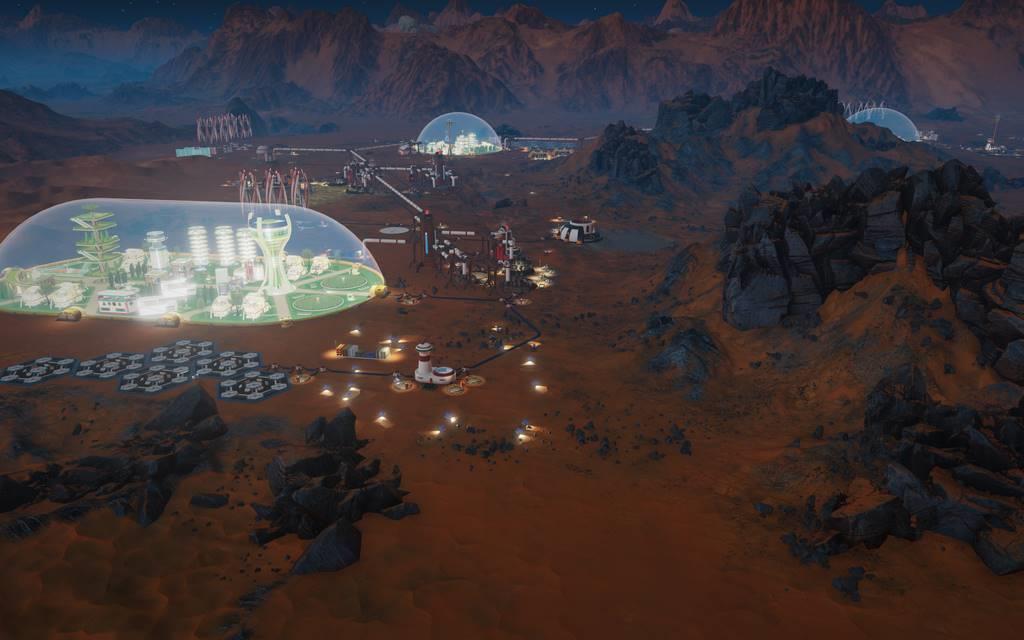 Then the game suggests that I might want to start building up a supply of water for my eventual colonists. There are two types of water collector machines to choose from. Uh-oh. I don’t have the proper materials to build the first type, and the second type has to be sent from Earth as a prefab. With no way of knowing this ahead of time, I failed to pack one on my rocket. There is nothing to do about it but order up another rocket and wait for it to arrive. In the meantime, I build a few more solar panels and a few other sundry items.

My second rocket arrives, and I build the water condenser. Around this time, my solar panels start shutting down. Apparently, they require regular maintenance to prevent red dust from building up on them and gunking up the works. Did the game tell me this so I could prevent it? Nope.

I try to order my drones to repair the solar panels, and they completely ignore me. The game has failed to show me how to specifically order them around. They tend to zip around autonomously, and now that I need them to focus on one thing, I can’t get them to do what I want them to do. The suggested button presses in the UI direct my drones to the failed panels, but they don’t do anything to fix the situation. Before long, my electrical system suffers a cascading failure, and my colony is over before it starts. 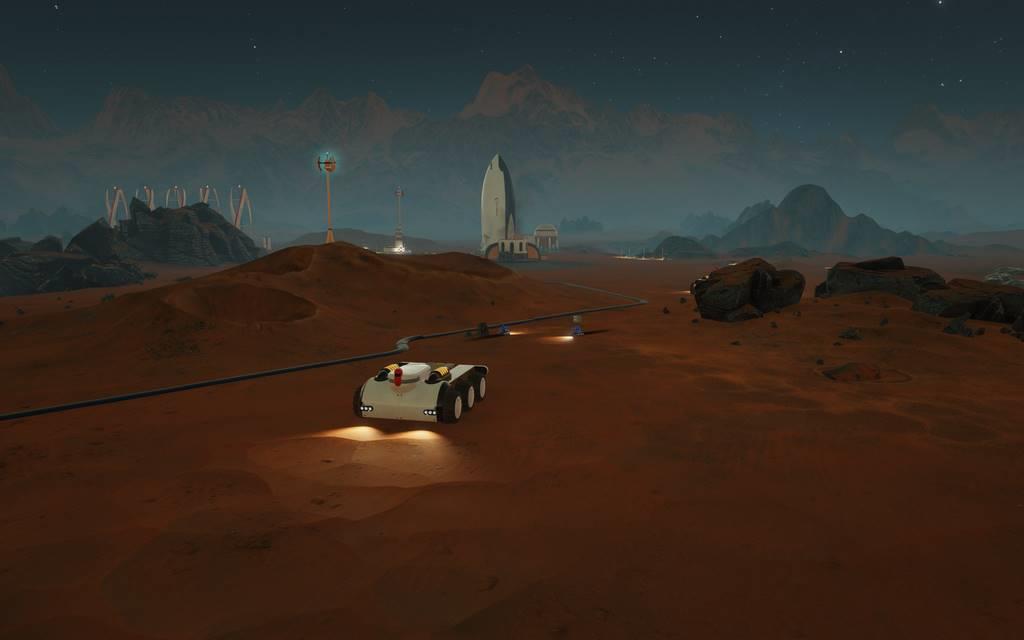 This is the point where I would have bailed on this game. I have played hundreds, if not thousands, of games. I have a wide variety of experience in the gaming world. I understand game systems, and how things tend to work. However, there is a certain amount of information that players need when starting new games, and Surviving Mars simply does not provide that information. I should not have to go out to YouTube to watch several hours of tutorial videos in order to get started on a game. Much like I would never start a large and complex board game without an instruction manual, I should not have to start this obviously complicated game without some sort of tutorial mode.

Of course, for the sake of the review, I tried again. And again. And again. Over and over. Each time I made it a little farther before some unforeseen event shut me down. On my fourth attempt I managed to get people to Mars and keep them alive for a few days. On my fifth attempt, I was able to keep them alive for the ten days needed to declare the colony viable. On my sixth attempt, I was able to add a second dome. I did learn a little from each run and get better. But each attempt represented at least two to three hours of playtime, causing me to get that much more frustrated every time something stupid happened and wiped me out. 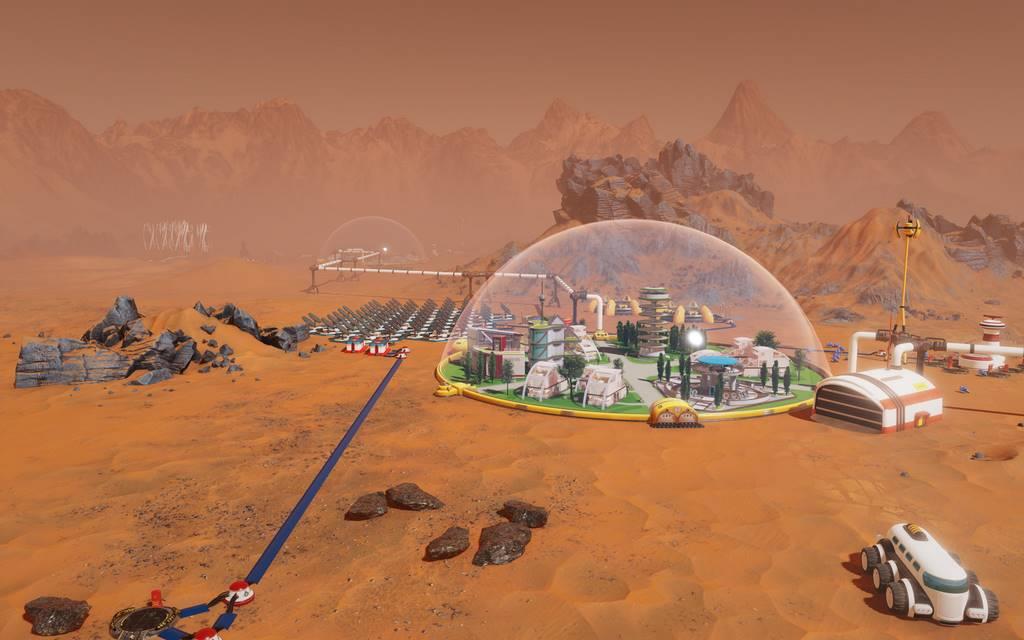 One time I was unable to provide enough food for my colonists to survive. The game doesn’t really clearly state how much food each colonist needs, so that was irritating. One time the vital cables linking my electrical system went bad. I had no idea this could happen and replacing the cables or rerouting them didn’t seem to make a difference. One time my drones just stopped moving. They had plenty of power, they just seemed to lose the will to live. I watched over several hours as my colony choked and died, helpless to do anything to prevent it.

It would be one thing if I knew what I was supposed to do, and I just couldn’t keep up with the game’s demands, but that is not the case. Every time I died, I was wiped out by some unforeseen dynamic I was unaware of. Spending hours micromanaging a thousand tiny problems, while racing around to make sure every component stays clear of dust, only to be wiped out by a rule you weren’t aware of simply is not fun.

There is a fine game under the surface of Surviving Mars, and the developer may eventually patch in a tutorial mode so that players can understand its complexities. But in its current state, I would only recommend Surviving Mars to the hardest of hardcore. It is not the light and fun game you see in the trailers. There were times when I enjoyed aspects of Surviving Mars, when my colony was humming along, and thing were going right. The visuals and soundtrack are indeed a treat. But when things go wrong, and you have no idea why or how to fix it, all the fun leaks out of the game like so much oxygen from a punctured dome.

Playing Surviving Mars is like watching someone put a kitten in a plastic bubble. It’s cute for a while, wobbling around in its new environment. But then you realize that the kitten is going to suffocate, and you are going to spend hours watching it slowly run out of air and die. Trying to get the kitten out of the bubble is hopeless. You don’t know anything about bubbles, and the kitten isn’t telling you. Have fun, kids!