I wonder if the team at Furyu thought that someone at Square Enix and Atlus was asleep at the wheel and that they could slide The Alliance Alive in unnoticed. I’m not saying that it’s a blatant rip-off of Bravely Default, but from a visual standpoint, and with some of the world building, I couldn’t help but notice a few odd similarities. But once I was able to shake this sneaking suspicion, I actually found a pretty good game with a cute cast of characters and an interesting story with some snappy combat to boot.

One day, one thousand years ago Daemons erected The Great Barrier that cut the humans off from the outside world, leaving them split between five different realms and forever darkening the sky. It is within one of these realms that our story begins. Galil and Azura have grown up with their hometown under the command of the Beastfolk. The laws of the land place the humans in a lower caste than the Beastfolk, and they rule with an iron fist. The Resistance that fights against the Beastfolk is run by Azura’s father, and as the two youth have aged, they have been increasingly involved in her father’s actions and with Azura’s natural curiosity, it was only a matter of time before they fell afoul of the Beastfolk and Daemons. The story unfolds at a pretty slow pace, but I found that things got more interesting once I visited the other realms and saw how the humans and Beastfolk interacted, even Daemons were more common in other parts of the world, making the politics of the world more complex than they initially let on.

There is a lot of world building I got to take part in, once the game opened up. Throughout the world are various guilds that link up and help adventurers, the Blacksmith guild repairs gear when visiting inns, the Library guild will show enemy weaknesses in battle, the Recon guild team will hinder enemies in battle, the Sigmancy guild will boost party stats in battle, and the Tactics guild is responsible for the formations used in battle. By linking these guilds to other parts of the world, I would gain access to their abilities in different realms, which was an absolute must for difficult battles.

The combat of this game is quick and snappy, but I don’t want to say it’s rewarding, because the growth rate is a total slog. In The Alliance Alive, I wasn’t leveling up like in a normal RPG. Instead of experience, the characters would randomly increase in two different stats, Hit Points and Skill Points. Stat points are adjusted by the weapons and armor that can be found, and then the skills for those weapons are leveled up by using them. After finishing a fight, there’s a chance for Talent Points and So, the game’s currency. Talent points augment a character’s growth, increasing the rate at which they gain HP or SP, or how frequently they can unlock new skills with specific weapons, or spells. There are other ancillary skills, like haggling and scouting that help make the adventure easier, especially since So seems like it’s rather hard to come by and the merchants charge hefty sums for their wares. It really felt like the rewards for battle take far too long to build up, especially within the first twelve hours or so. Once they game opens up, it gets a little better, but not a whole lot as the grind just grows steeper and steeper. 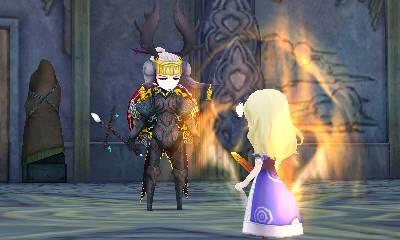 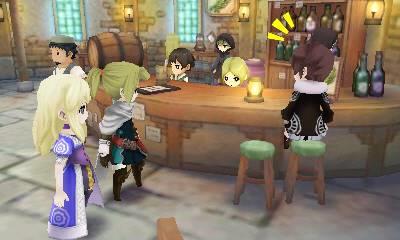 Combat depth takes a turn when it comes to party composition and member placement. There are pre-made compositions that assign one of three roles, Attack, Guard, or Support. Depending on a characters placement and the weapon they are using, they will level up skills based on that role. So a character may have a strong Attack skill, but if they were placed in a Support slot, that skill’s effectiveness would decrease dramatically until it was leveled up. Having characters with healing skills high in Support levels is an absolute must, especially when I encountered a large number of chain battles, which continue uninterrupted. Under normal circumstances, all HP is restored when a fight is over. The only exception to this rule is when a character is knocked unconscious, in that instance, their max Hit Points are reduced and will not return to normal until I visited an inn for a proper night’s rest.

Combat as a whole is mostly enjoyable, but fighting against some of the games’ tougher enemies, coined as ‘water devils’ are an unfortunate pain in the ass, especially when I found one of their dens, which sucked me in and trapped me with a ton of powerful enemies. In their dens, HP doesn’t restore after a fight, and while the game denotes the difficulty level of these dens, I found myself in a level 1 den and was quickly stomped into the floor. That’s when I found this game’s continue feature. Under normal circumstances, losing a fight will cost one Order Gem, these can be found throughout the game world, for one gem I could restart the fight, or for three, I could flee the battle entirely. However, in the den, the only option is to retry the fight, or return to the title screen. With no possible way to win the fight, I was forced to load up an old save file and lose about an hour’s worth of story progress.

While the 3DS still has some life left, we’re finally at the edge of what the console can push graphically and it’s a shame that for the most part, 3D is not used in the game, with the exception of cutscenes and when the camera idles. Visually, the style of characters in The Alliance Alive is very much within the cute anime aesthetic. Though the confusing thing is that everyone has the same face type. Their eyes are slightly different, but if it weren’t for the clothing and hair being distinctly different, I would have  a hard time picking these characters out of a line-up, and overall they become mostly forgettable, especially when I managed to assemble my full team of nine characters, once that happened I backlined some characters and pretty much never saw them again, especially when one of my frontline characters was a scientist who pilots a giant mecha rubber ducky. This game has substance in the oddest places, and that’s nowhere more prevalent than the music. This is one of Masashi Hamauzu’s most eclectic soundtracks to date, with a lot of tunes that would make more sense in a racing or music game. The battle theme switches between piano arpeggios into a weird techno synth with the beat of a dancehall anthem. It’s all over the place, but not quite in a bad way, it just, didn’t resonate with me tonally.

And that’s kind of the crux of The Alliance Alive, it’s a weird game that has some good and interesting ideas, but a lot of them feel like they could have been done slightly better and then this game would have been amazing. But as it stands it feels good in some places, and mediocre in others, which is odd because when I look at the developer team for this game, I’m rather impressed, Yoshitaka Murayama, creator of the Suikoden series, Kyoji Koizumi did the game design, and Masashi Hamauzu handled the soundtrack, this was a chance at a dream team level of creators, and the end product might be one of those situations where there’s too many cooks in the kitchen. As it stands The Alliance Alive is a pretty middle of the road RPG, and it has a few bright spots, but with interest in the 3DS waning, I think this title is sadly one destined to be forgotten.

I had hoped that after a few initially rocky hours, The Alliance Alive would somehow turn it all around and be a game that I would love. Unfortunately that's not quite the case here, and on a system with no shortage of good RPGs, it's hard to sell The Alliance Alive to anyone but the most ardent of fans.