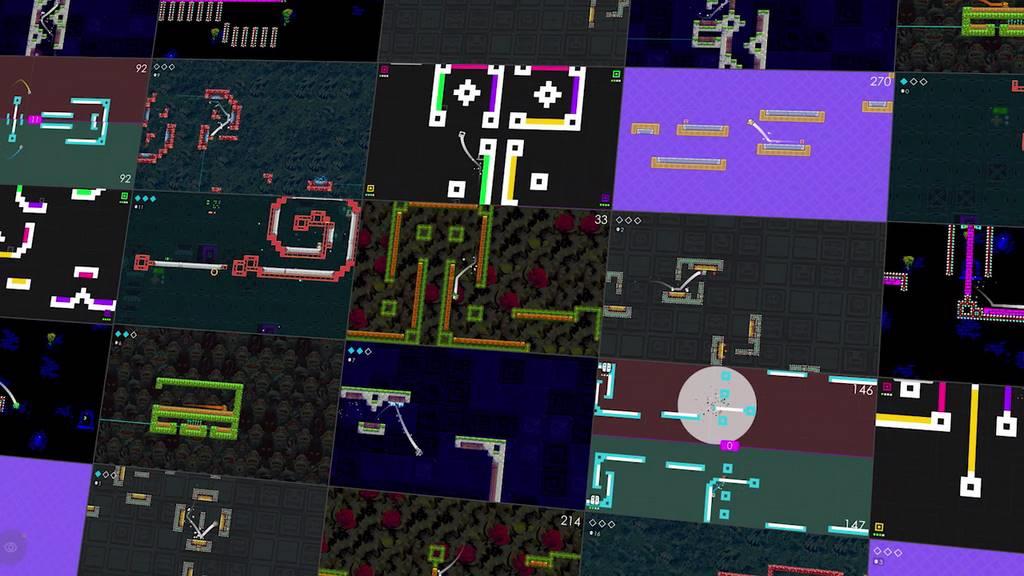 Super One More Jump revolves around a simple concept: jumping. Every button makes your little cube-like character jump and the goal is to get to the end of the stage and collect the hexagonal-shaped item at the end. This sounds simple enough, especially when all you have to do is jump. The game introduces you to the concept with very easy stages early on, giving you ample time to understand the concepts behind the gameplay. You have to jump from platform to platform, and while that may seem simple, it soon becomes apparent it’s not. What actually happens is when you jump from a platform, you’re actually traveling around the platform in a half-circle and if there happens to be a platform you can land on while you’re in the air, you’ll cling to it. If not, you’ll travel around to the other side of the platform, possibly meaning you’ll travel upside down for a bit. In other words, the platforms basically have their own gravitational pull.

The game consists of eight sets of 12 stages each. In each smaller set of unlocked stages, you can play the stages in any order you wish. Once you collect a specific number of hexagons total, you’ll unlock the next set of stages. There are a total of 96 stages and you only have to complete 68 of them to unlock every set of stages. But there’s a lot more you can do, both within the stages themselves and by collecting the hexagons. During each stage you’ll come across three gems you can collect. Sometimes they’re easy to get, while other times the game might force you to basically go through a stage twice to get all three gems. Collecting these has two purposes. First, you’ll unlock various customization options where you can change the look of your character, the items, and the stage layout overall. It’s purely an aesthetic change, though when you’ve gotten used to how a stage looks with one setting, changing it may take some time getting used to. 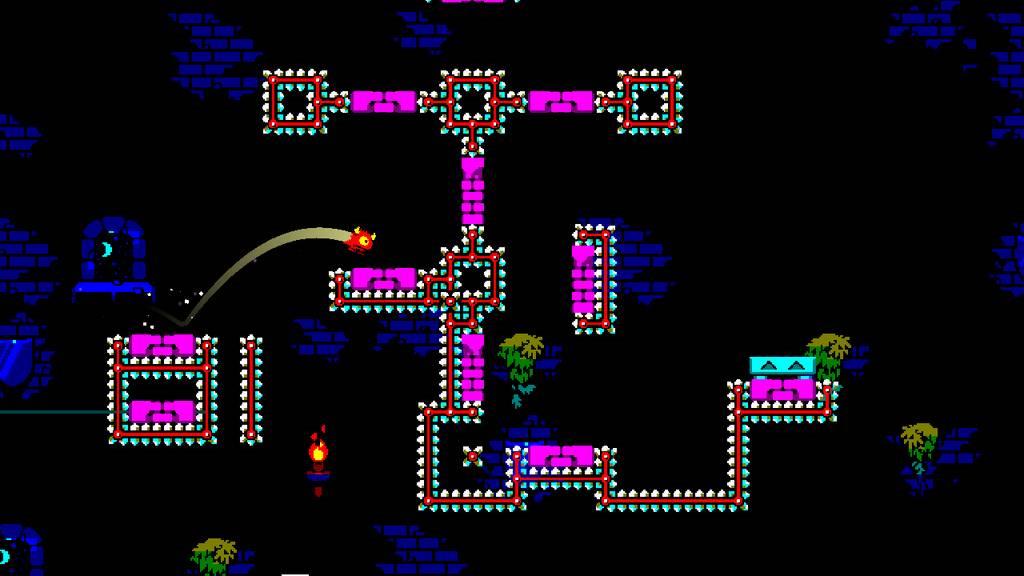 The other thing collecting gems will do is unlock some extra ways to play through that stage. If you manage to get all three gems in a stage, you can then play through the stage using Night, Mirror, or Rotation options. Night basically makes it so the entire stage is dark save for some light surrounding your character, testing how well you know the stage layout. Mirror is basically playing the stage backwards (as in the stage is flipped horizontally, not playing from finish to start), and Rotation makes the stage constantly rotate slowly as you play. This doesn’t affect your character or movements in any way, but it could be disorienting. If you die the stage doesn’t reset its orientation which can throw players off. Unfortunately, it’s not like collecting each gem will unlock one of these options; it’s all or nothing.

Besides unlocking the later sets of stages, collecting a certain number of hexagons can also unlock extra game modes such as circuit or endless. Circuit mode basically has you traveling around the screen over and over again, except every time you clear a side, it’s replaced with a different set of obstacles. It’s kind of hard to explain without actually seeing it, but you get one point for every successful jump you make, whether it’s over something or just jumping into thin air. Endless mode essentially has you progressing through a randomly generated stage that never ends. As a Mega Man fan it reminded me a lot of the Endless Stages from Mega Man 9 and 10 where there were set areas you went through and obstacles to traverse, but how and when they came were completely random. You can actually unlock both of these extra modes early enough to encounter obstacles and mechanics you haven’t seen yet in the main game. 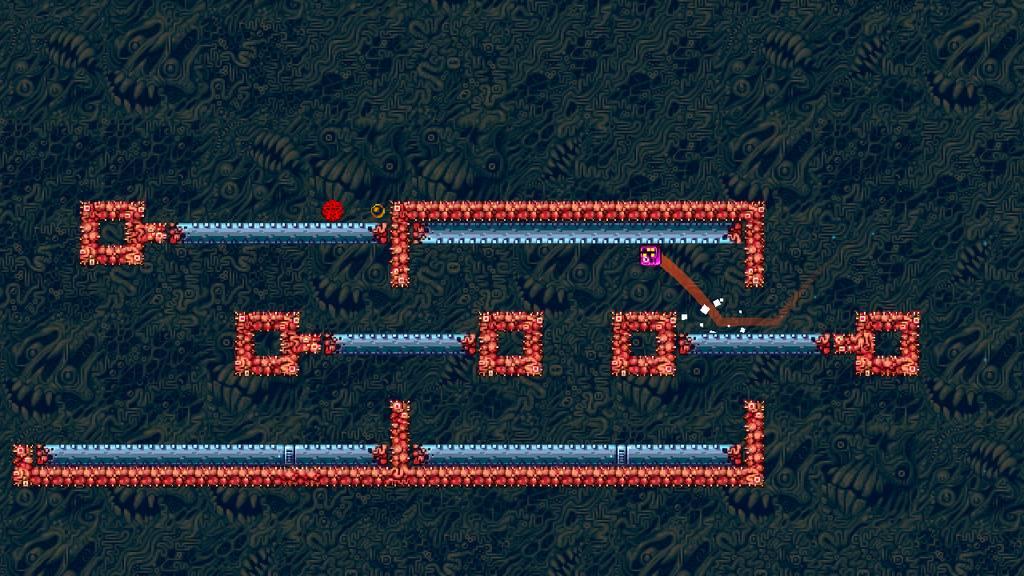 The game also offers two multiplayer modes with two to four player co-op and two-player endless. The co-op mode is actually pretty fun. Each player is assigned a color and are responsible for jumping whenever the character is traveling along their color. Playing this solo is kind of challenging when using two Joy-Cons as you have to remember to press the button on the correct Joy-Con to jump. After a while it becomes easier and I have an inclination to try with three or four Joy-Cons on my own. The two-player endless mode is exactly what it sound like, except it’s not co-op, but rather two players trying to see how many successful jumps they can make in an endless stage. Both players are given the same endless stage setup. When you die you get sent back to the start, but your score doesn’t reset. In other words, instead of trying to see who can get the farthest, it’s the accumulative number of jumps you make until time runs out. There is an oddity here with the timer. There are a few different settings you can choose from, with the timer between 30 and 300 seconds, but you can only change the timer amount when a game is over; you can’t just go into the two-player endless mode and change it before you start. I find that kind of weird.

Overall, Super One More Jump is simple yet addictive. As I said at the start of this review, this is one of those games where you can easily say, “Just one more try,” as each attempt at a stage is rather quick. The difficulty of the levels gradually increases over time as more mechanics are introduced, with each mechanic being introduced in one or two easy stages before going back to the more difficult ones. The two multiplayer options seem enjoyable, at least soloing the co-op mode, and I’m really interested in seeing what things would be like with three or four players involved. The fact that the game is only seven dollars makes it even more worth picking up.

Super One More Jump is a fun and addicting game that’s simple to pick up and has a gradual difficulty curve.  With over 100 levels to play and a few extra game modes to unlock, plus the two multiplayer options including two- to four-player co-op, Super One More Jump is definitely worth picking up.