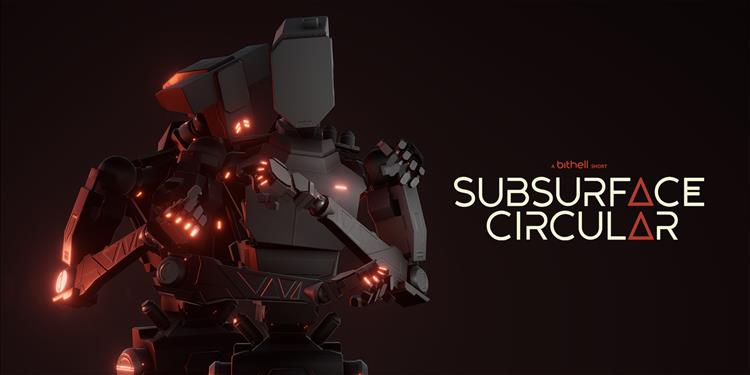 Written by Russell Archey on 3/1/2018 for SWI
More On: Subsurface Circular

If you watch or read a lot of science fiction, you’ve probably come across scenarios where robots are rather common place in society.  Not just robotic or computerized appliances and the such, but living amongst humans.  A lot of things are computerized in today’s world from vacuum cleaners to cars, but we’re still a ways off from humanoid robots living amongst us.  The world of Subsurface Circular is different however, as robots called Teks live among humans performing human-like roles such as detective and priest, but do they live peacefully among us or is something bigger at play?

Subsurface Circular is a text-based game presented in a 3D third person perspective where you (as a Tek) attempt to get to the bottom of a case why other Teks are mysteriously disappearing.  The entire game takes place on a subway car and various Teks will come and go throughout the game.  Early on you’ll talk to one Tek who says his friend went missing and wants you to take up the case, even if you weren’t programmed to do so.  It turns out that his friend isn’t the only Tek that’s gone missing.  This will give you an objective to find the cause of the disappearances.  Throughout the game you’ll also get other minor objectives to clear out for that particular part of the game, though they all eventually lead back to your main goal.  Getting to the bottom line isn’t as simple as that though.  Sometimes certain Teks won’t help you unless you help them with something.  For instance, one Tek won’t talk to you unless their partner is on the train as well, then when they do come on the train the partner has some sort of malfunction that you have to fix before either of them can help you.

As you talk to certain Teks you’ll gain focus words which are used to get into specific details about the case.  These focus words will stay with you until you complete the objectives where the focus word was needed.  If general questioning doesn’t get you anywhere, try using some focus words to dig a bit deeper into what the other Teks know.  However, each part of the game typically has about three or four Teks to talk to, so if you can’t get anywhere with one, try one of the others.  Not only could you learn a bit more about your main goal, but you’ll uncover what’s possibly the best aspect about the game: the writing. 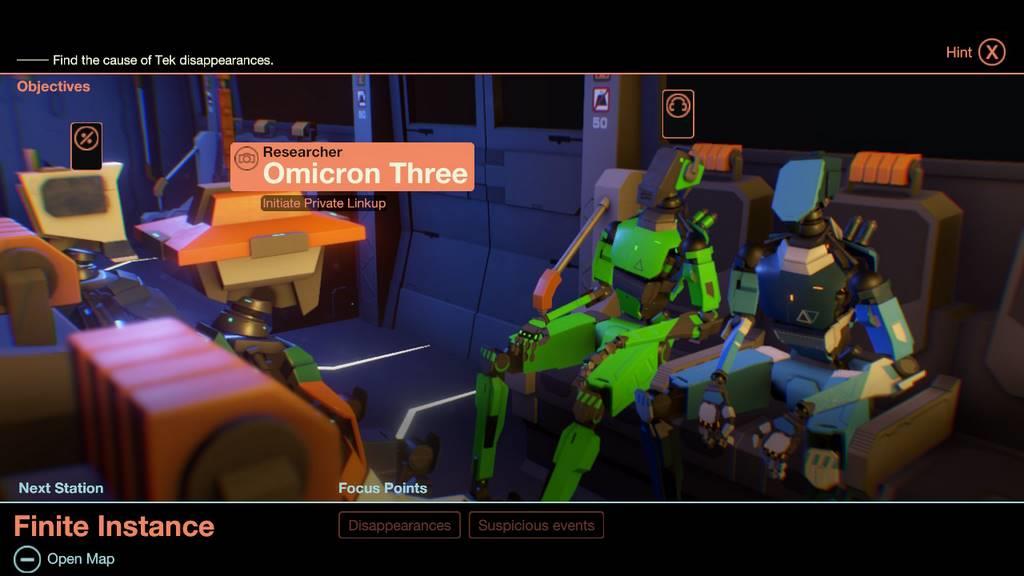 I mentioned that as you progress through the game you’ll meet up with a lot of different Teks on the subway car, but these aren’t just your typical robots that all look alike and have the same personalities.  They not only look different but, since they were programed by humans to perform various tasks, all have specific personalities, and those personalities might change during the course of your questioning.  One area has a scenario where you have to keep changing the mood of one Tek to get another one to open up more about the disappearances.  On top of that, the story itself is pretty interesting and engaging.  I do have a couple of nitpicks with the game that I’ll get to in a moment, but there were times I’d forget about them because I was enjoying the story so much.  There are a few twists and turns throughout and while I won’t spoil anything about it, the ending actually surprised me a bit, in more ways than one.

So with an engaging narrative and interesting personalities of the Teks, I do have a couple of complaints and the first one is that the game is pretty easy.  Now granted this is a text-based game, not a tough as nails platformer or RPG, but there are a few puzzle elements thrown in.  However, the puzzles are mostly incredibly simple to solve with only a couple towards the end that really made me stop and think.  For a couple of the trickier puzzles there is an option in your questioning you can use to help you solve the puzzle.  I did it for the first one just to see what it did and thinking I had to, but for the second one I left the option off and just worked it out myself.  You can also press X to have the game give you a hint as to what you should do to move towards your objectives, but for the most part they aren’t necessary.  There’s also no penalty for either of these hint systems, so you can use them at your own will. 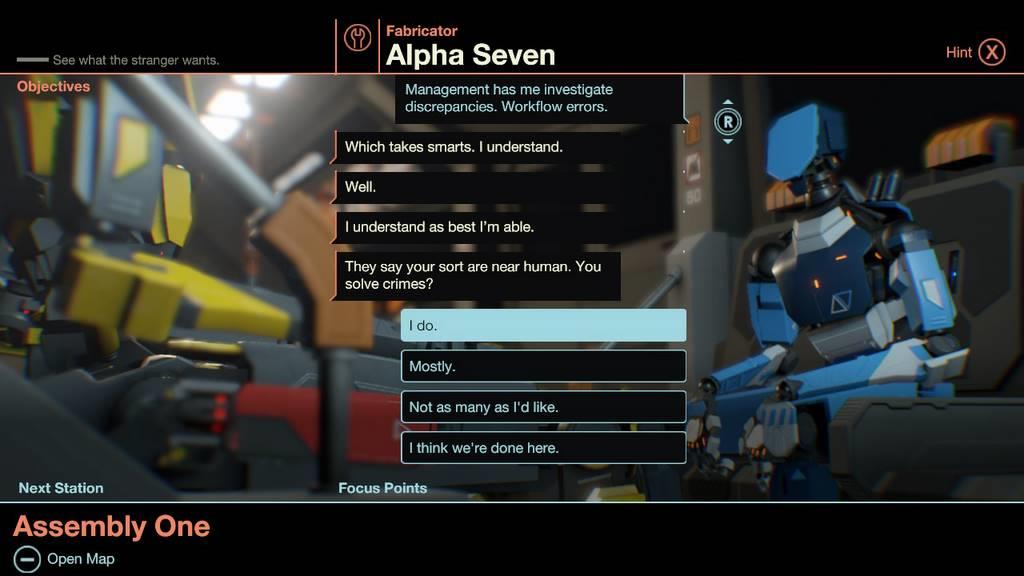 The other minor issue I have is that the game is incredibly short.  I mentioned how as I was playing the game I became pretty engaged in the story to the point that I wanted to keep going.  When the end came and the credits rolled, it took a moment to realize the game was over.  When I checked my Switch’s play log afterwards I saw I had only put in about two hours of gameplay.  Granted I wasn’t expecting anything monumental in terms of length, but I thought maybe I missed something or there were other options to take that would give me an alternate path through the story, but sadly there isn’t.  Early on you do have a few possible responses to questions and scenarios, but no matter what you choose you’ll be streamlined into the same outcome, even if you pick options that make you a total jerk to who you’re talking to.  Curious what other people thought I checked out some of the reviews for the game on Steam and to my surprise the reviews were mostly positive.  To me that kind of harkens back to the days of games on the NES and Super NES, or even systems predating those; if a game is compelling and engaging in some way, the length of the game doesn’t really matter, within reason of course.

Thusly, Subsurface Circular is a great game with a compelling story that I enjoyed throughout my entire playthrough, but I just with here was more to it.  I felt that the puzzles themselves were not all that difficult and just by asking any questions you see pop up that you can ask or by using all of the focus words at your disposal, you can easily clear any puzzle you encounter.  The only couple I had to think about can be brute forced, but it would take quite a while to do so.  I wish there were more puzzles like that, but the ones we did get to go well with the story.  I’d also have liked to see maybe a couple branching paths depending on the choices you make.  Maybe you’re given an option for a response and depending on which answer you choose you go down a different path that might ultimately lead to your main objective, or you might wind up somewhere else altogether, similar to the Choose Your Own Adventure series.  Instead of just having a straight line to your goal, have multiple paths that could route you to your goal, or you could end up somewhere else.

If you’re looking for a game with a great story that’ll keep you engaged throughout, Subsurface Circular is worth plopping down the six dollars for.  The characters are interesting and the story itself kind of branches out a bit in terms of your objectives as you learn more about what’s really going on with the Tek disappearances, and everything comes together in the end with an ending that I honestly didn’t see coming.  If you don’t mind a text-based game that’s a bit on the short side, you’ll likely enjoy the story that Subsurface Circular puts in front of you.

Subsurface Circular has an engaging story with compelling characters that really makes you think about how you’ll meet your objectives.  While the game is short, clocking in at around two hours, the story itself is enjoyable enough that you really don’t mind the short length.  For six dollars, Subsurface Circular is worth checking out for the story alone.