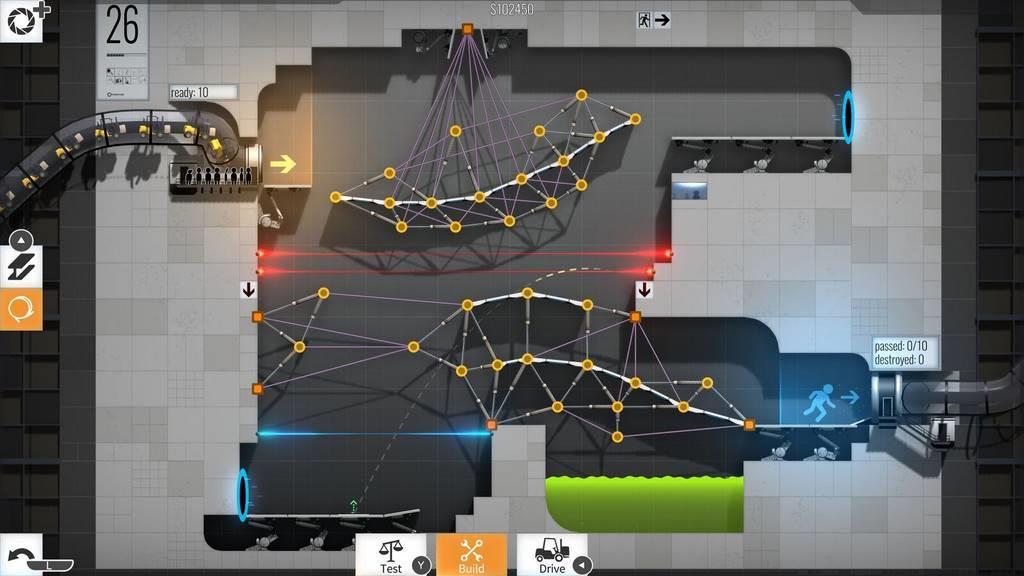 Written by Kevin O'Connell on 3/5/2018 for XBO
More On: Bridge Constructor Portal

I’m going to tell you straight up, the initial impression of Bridge Contructor Portal is a bit underwhelming. The music is ok but very repetitive, the end of each construction isn't too exciting, and the graphics aren’t going to blow you away. But after the first 10 minutes all you’ll want is more.

Each level starts by giving you a clean slate from which you are to create a usable bridge system to move vehicles from start to finish. For the first few levels, you have the wonderfully comical AI known as GLaDOS helping you figure out some of the simple building procedures. After that it's sink-or-swim time, figuring out what the level wants you to do. Sometimes that is with destroying a few vehicles to figure out a direction. Sometimes it is pretty obvious. By level 30, it is downright mind-numbing.

The game is simple, however, so the frustration doesn’t really ever get to you. The music isn't inspiring, but it is harmless and not overwhelming—kind of in a Minecraft motif. The background may also be no better than that of a really good app, but it is technical looking and easy on the eyes. The end result of each level is just a horn with confetti too, but it fits the ho-hum worker day that the story gives you.

The story is a bit light and, like the plot of Superhot, it is there to move you forward. There is a small cutscene to let you know of your chapter-beating success and some cute humor even gives you pause to hear it. I let my son give it a try and he was way into the building (to the point of making havoc more than winning), but was hard-pressed to not hit “continue” instead of listening to the story. When I did manage to get him to listen, he did smile at the silly banter from the game, but still wanted to move on. 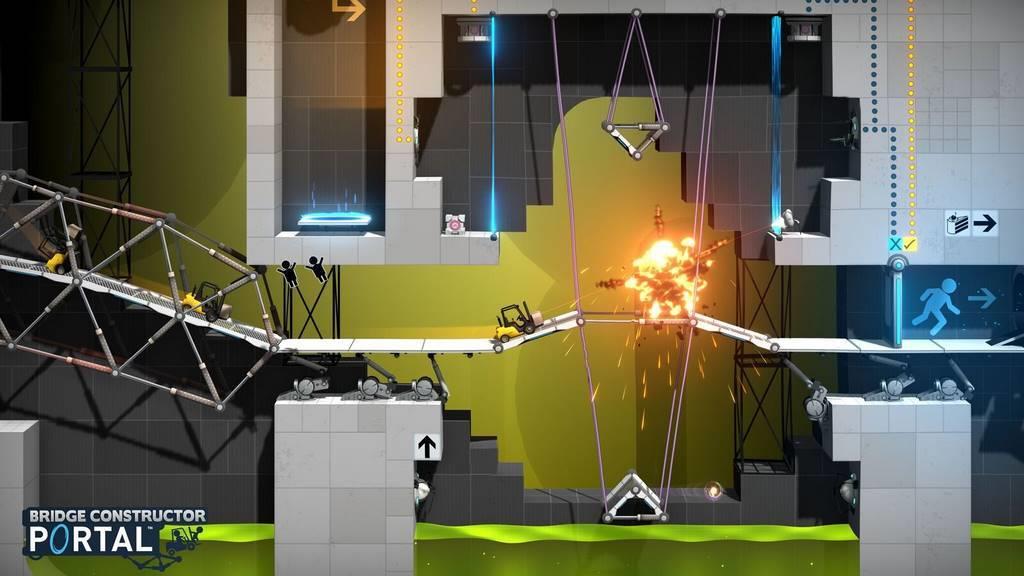 Building is the purpose of the game and it is laid out pretty well. Like I said, the first few levels are choreographed by GLaDOS, but even after that, there is a “best practices” manual that gives you ideas as to how to complete the problem. Don’t get me wrong, it doesn’t finish the level for you, but it may remind you that you can use both panels and wires to hold a section of bridge. I have to say, I’ve not had a problem completing levels, but it is trial-and-error throughout to find the right angles and best way to support the vehicles.

Speaking of the vehicles, they too are very ho-hum. They do their function brilliantly, however. You have an unlimited number of them and an unlimited amount of funds too. You could build stuff from one side of the screen to the other for hours and not run out of money. The vehicles are different types of same-sized forklifts with multiple passengers on them. They too are unlimited and die often. Vehicles also get stuck, don’t take well to gunfire, and do ­not float. 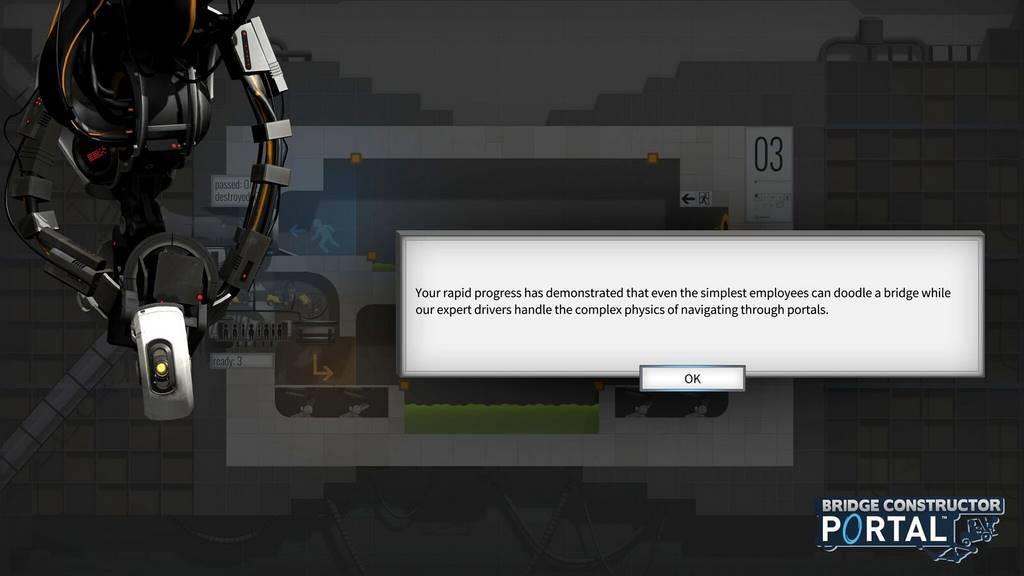 The building materials are fun to work with, though, and you’ll realize that they too are infinite. The planks are pose-able in any direction you can make. They also make great stoppers for out-of-control stuff. The wires in the game are very useful in the upper levels and can help support free-standing bridges of decent size. They can also be as long as you want them to be. Want to help suspend a bridge from the top to the bottom of the screen? No prob. They aren’t as strong as the planks, but they help when you need them. Let’s not forget the portals! The name of the stinkin’ game! There are portals on most levels and they direct your vehicles (or other objects) to other parts of the board. They are non-moving, same-colored holes that help you get from start to finish. Sometimes four sets of them...sometimes none.

Stopping there would work, but there are a plethora of helpers and hindrances. Everything from bounce goo to speed goo, portals, buttons, and launchers to help get you where you need to be. There are also machine guns, no-build zones, lasers, green goo, and gravity to spoil your day. The thing to remember is that no matter how disgustingly awful your build looks, as long as the vehicles get from start to finish, you win. Even if the stuff breaks at the end—which has happened to me. 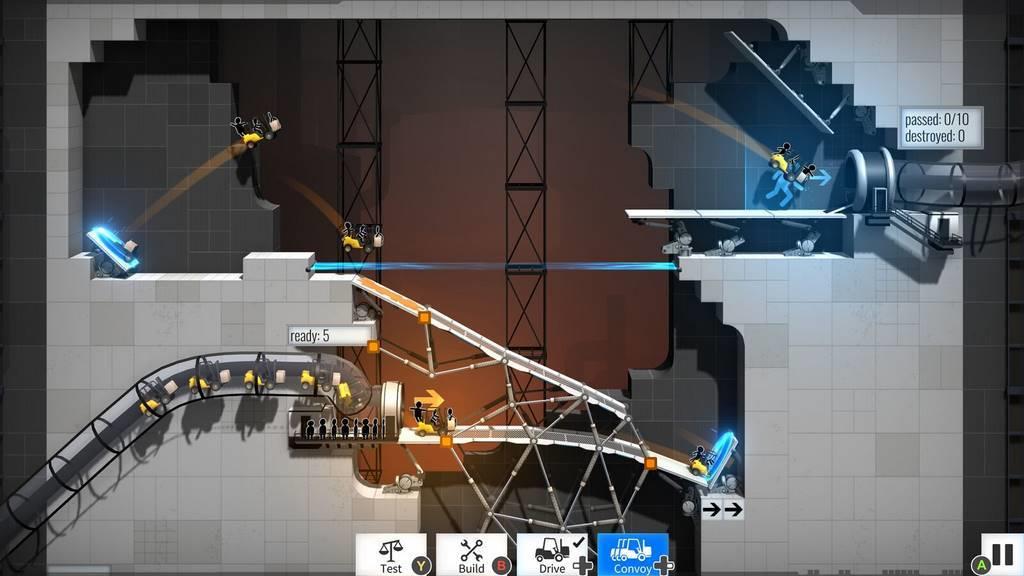 As a “does this really work” double-check, the game offers another test after you get a sample car in. It is called “convoy.” This is a certain number of vehicles, anywhere from two to 20-ish, that all run together to test the strength, quality, and sustainability of your build. Got one car over the bridge but the supports were red? Guess what will happen when you send over seven? It is a secondary test that makes the game a bit more challenging. I did all the levels with no problems whatsoever, but adding the convoy adds lots of time and re-figuring.

You will come to ignore some of the cheap-suit appearances of this game because of how well it all works. You will forget that you were supposed to quit 25 minutes ago because you can’t get the last vehicle through the finish. You will smile with the personal achievement of spending an hour figuring out a system with two cars running at the same time, being launched at each other in order to get to two portals on opposite sides of the screen, finishing on the same path over deadly goo, while stopping two machine guns from blasting them to bits. You will.

Bridge Constructor Portal is a fantastically challenging puzzle game that is dressed in $10 looks. You will not be awestruck by anything the game does, but the challenge will have you wanting more, the humor will keep you smiling, and the silly horn at the end of the level will be enough to know you "did it."