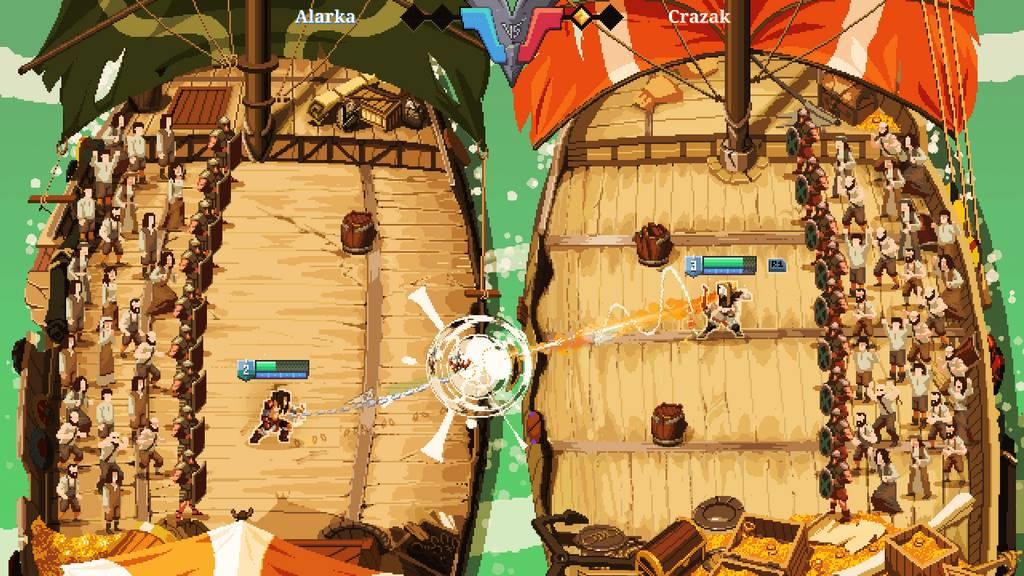 When I first started up Strikers Edge, the multiplayer dodgeball-fighter game from Fun Punch Games, I realized that there are some titles which you must absorb over a period of time to understand, and others that just tell you up front what they are.

This is an example of the latter. But that doesn’t mean that it’s entirely a bad title. Although it is certainly not an entirely great one.

If I’m being honest with myself, I think that part of it is my own doing. From going straight to normal difficulty—which is surprisingly difficult—and failing to use the tutorial on my very first try with such a unique game.

I got creamed by the AI the first few matches I played in the single-player campaign. Using the left analog stick to control my player-character’s bodily movement, and the right to aim my throwing weapon, we glided on grassy environments like it was an ice rink. My opponent practically had a lock on me, and made my clumsy, lopsided aiming look like child’s play. Most of the hits I got were lucky. It was after the fourth or fifth loss that I decided to call it quits.

But before I shut the game off, though, I decided I’d play around in the menu, and lo and behold, there was the tutorial. This is the thing that saved me from hating the game. Learning the move set of basic attack, charge attack, dodge, and block, as well as advanced concepts such as stamina depletion, I learned that there is quite a bit more to this game than I initially thought. The most obvious is this: it requires skill, but more importantly, it requires patience. 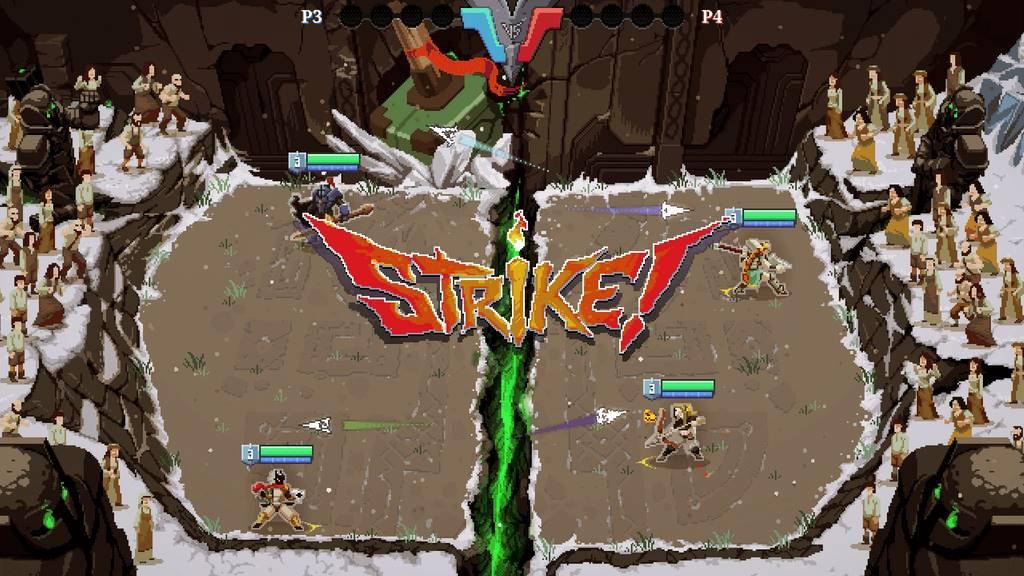 It’s neat how the developers of Strikers Edge call it akin to extreme dodgeball. I mean, it is. But really, it has a lot more in common with the Soul Calibur series of games than anything like a tennis game. Firing up the single player campaign, and cycling through each of the characters, I found that each of them had their own unique story that carried them through the fantasy world in which the game takes place. They each have a special power residing within them, and each pursues their goal with little regard to the safety or well-being of others in their path.

This is one of the best parts about the game. Although the campaign is not exactly what I would call well written, I still feel like I’m inhabiting a real person. Whether they’re a Valkyrie, a sellsword knight, or a barbarian. The writers fleshed out the desires of each fighter, and I know that I’m fighting for more than to just fill my time. I don’t want to get too far into what the story entails, but I can say that I would be interested in a more full-fledged, overarching plot to the adventure that players participate in. The story allows players to think about the overall significance that their actions have on the world and the people they encounter. Now, the only way the encounters play out are by killing people with lethal weapons, but I do applaud the developers for giving me a bite-size portion of something that has a real taste to it. 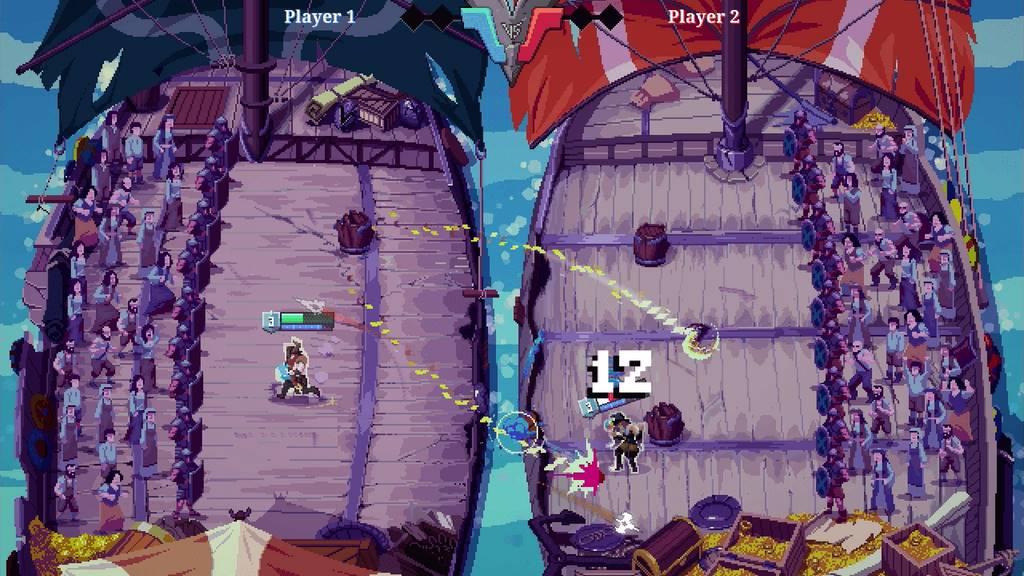 There’s a catch though, and it involves the gameplay. As stated earlier, I started the game on normal difficulty. I like to challenge myself in my single player games by taking on the higher difficulties, so I didn’t see why I wouldn’t be able to ace this one. Again, as stated earlier, I got creamed. And again, I had to play it on easy so I could complete it. “Why is this so hard?” I asked myself. Thinking back on it now, I realize that there are two answers to this question. The first is just that I suck at this game. The second is that the developers placed way too much of a stretch and not enough balance between the difficulty levels (I haven’t even tried hard difficulty yet, and don’t plan on it) so that when the players jump in, they really don’t know what they’re getting into. This is a niche dodgeball game with more popular fighting game elements, or a fighting game with niche dodgeball game elements. This is not to say that the developers did not do a good enough job to blend the genres, but it is something that probably could have used some more work to let the casual player in a little

All in all, though, I loved the single player campaign. It kept me invested in where these characters wanted to go and I found myself wanting to see their journeys to the end. Even if easy difficulty felt like I was playing against a tutorial bot.

Although the obtuse difference in difficulty is certainly jarring, and the length of the single-player campaign is just a bit too short, the game’s biggest misstep lies in its focus. 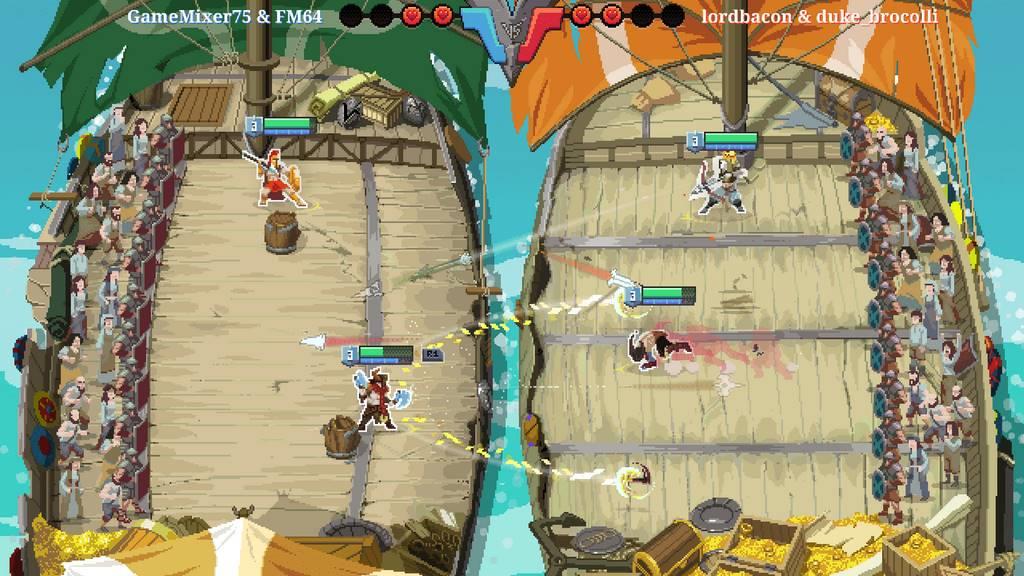 On the game’s main menu are six tabs, and when it starts, the one tab always highlighted first is the online multiplayer tab. Next to that is the splitscreen, and below that is the campaign, followed by options, extras, etc. With this menu design, the developers make it clear that the thing they want the player to focus on immediately is the online multiplayer. This is understandable. Fighting games are built off their communities, so why shouldn’t this one be? It’s too bad that, as of writing, the multiplayer scene is almost nonexistent. In all my attempts to find a match on my own, I was waiting as much as five minutes in the matchmaking screen, without even a hint of a match found. In order to play, I had to party up with our editor-in-chief.

This is the good part of the multiplayer. Given that both internet connections were stable, the gameplay was crisp and fluid, as if we were playing splitscreen. It was Chuck’s first time, and I will be the first to admit that he handily beat me (editor's note:dominated might be a better term) in four out of five matches. Seeing him play, it’s clear to see that the controls can be easily grasped and adopted by any player. 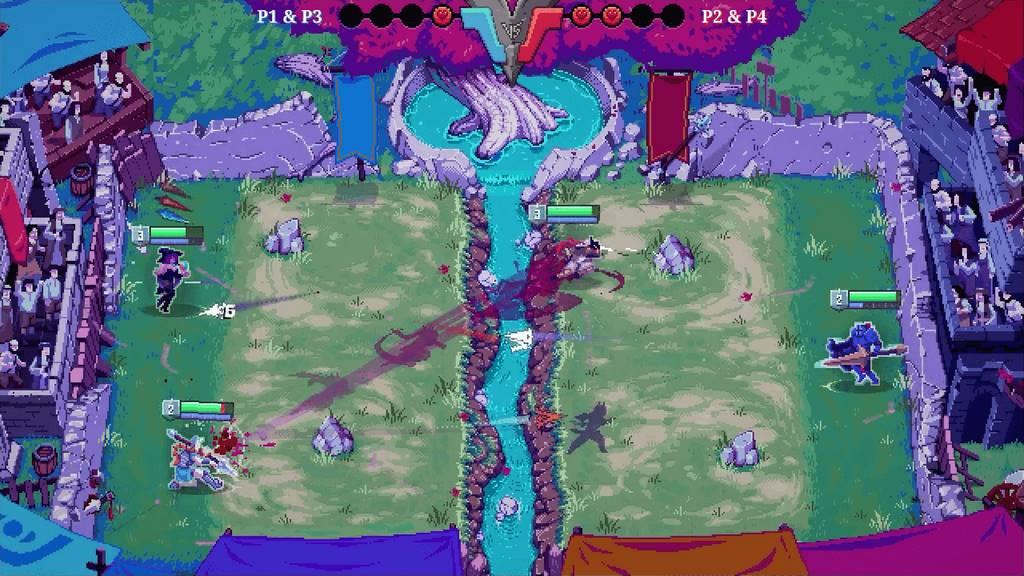 What we both realized however, was that although the multiplayer scene is scarce, this game is easily utilizable as a party game. It’s quick, energetic, but most of all, it’s engaging. This is the aspect that made me appreciate the game more than I did previously. It saddens me, then, that there isn’t as strong a community as there should be for a game such as this. Now, I don’t know what it’s like on PC, but on PlayStation, I can say with certainty that there is almost none. The sad part about this is that the game has been out for roughly three weeks. If multiplayer was the section that the developers and publishers wanted to focus the most on, then they really should have done more promotion of it, whether in marketing or in the game’s current state.

Overall, Strikers Edge is an admirable fighting game that inflects a new direction in the genre. The game is still niche, and is lacking in both aspects that do it the most credit, but the end product is a marvel to be inspired by and improved upon.

I have no skill when it comes to playing this game, yet I enjoyed my time with it. The two most important aspects of the game could have used a lot more support, but I choose to view that as a sign of greater things to come from the developers, whether in the form of a sequel or another product.