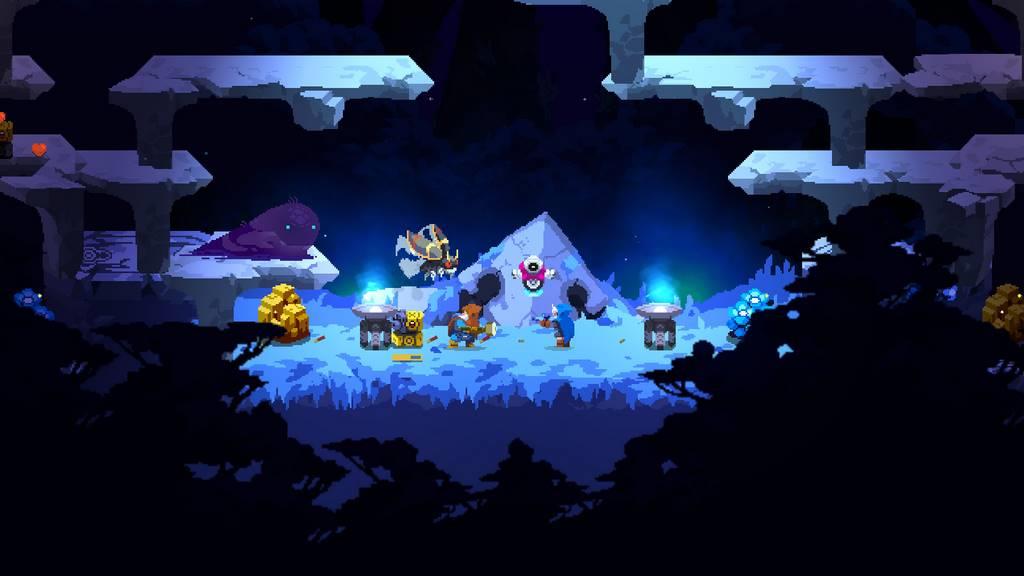 Written by Russell Archey on 2/12/2018 for PC
More On: Aegis Defenders

Over the years I’ve experienced pretty much every genre of game out there. While I tend to do pretty well with most of them there are a couple that I feel I excel at while there are also a couple that I…well, don’t.  Platforming games are probably my forte, growing up on games like Super Mario Bros. and Mega Man over on the NES, and if there’s any system that will prep you for tough platformers, it’s the NES.  One of my worst is probably tower defense games, usually because I make simple errors such as not knowing what towers I should buy or when to upgrade what.  Then we have Aegis Defenders which blends the two together.  Granted mixing genres is nothing new in gaming, but Aegis Defenders just happens to mix my best and worst genres together.

You begin the game with two characters: a tinkerer named Bart and his granddaughter Clu.  They hunt down ruins and artifacts and sell the scrap to get by.  The goal of each stage is to first traverse a platforming area while defeating enemies and collecting resources as well as chips, the game’s main form of currency.  When you get to the end of the platforming section the game shifts over to tower defense.  There will be a cut scene prior to starting the actual tower defense part so it’s not like you’re walking along and all of a sudden you have waves of enemies you have to defeat.  In the tower defense sections you’ll have multiple passages that enemies will appear from during each wave.  Arrows will point to where enemies will come from as well as what color most of them will be from that passageway (more on that in a moment).  You have to protect a particular item from enemies, typically in the center of the room.  Each enemy that makes it to the center will take away a golden heart located beneath your health gauge.  Once all of them run out, it’s game over and you have to restart from the checkpoint which typically means just trying the tower defense part again.

Bart and Clu aren’t completely defenseless, in more ways than one.  Each one has a couple of weapons they can wield such as Bart’s yellow hammer and blue shovel, and Clu’s blue blaster and red bow and arrow.  They can also make various traps and devices to help them out, from defense blocks and turrets to bombs and spike traps, each of these also certain colors.  So just what is it with these colored items, weapons, and enemies?  Simply put, enemies will take three times as much damage from a weapon or trap of their own color, for instance if a yellow enemy is hit with a yellow trap.  This means that a decent amount of strategy needs to go into the tower defense sections since you know what color the majority of the enemies coming out of each passageway will be, but you only have sixty seconds between waves to gather more resources, create more traps, and repair what’s already built (using Bart’s hammer). 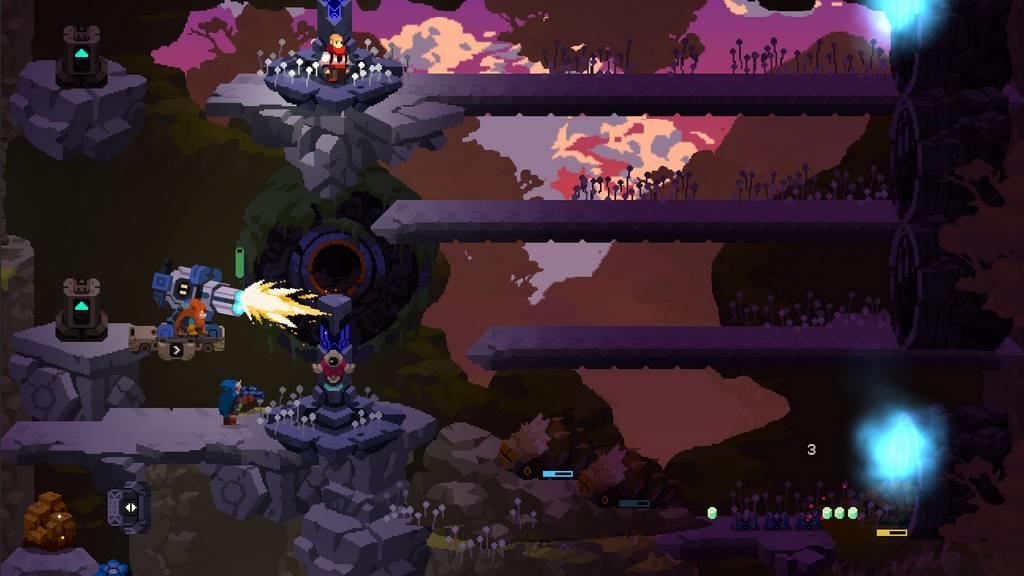 After each stage you’ll be rewarded depending on various stats such as surviving the tower defense portion without any enemies reaching the center or finding all of the hidden artifacts in the stage.  This will net you RP, or Ruinhunter Points.  While chips are spent on weapons and upgrading those, RP is spent on new and upgrading traps.  However, the weapons and traps unlock over time, so while you can go back to previously played levels to earn more chips, you can’t grind to the point of purchasing the most powerful weapons in the game within the first few stages.  RP is gained a couple of ways such as completing the aforementioned objectives in a stage as well as giving particular responses during cut scenes.  While you can grind chips, RP is kind of more limited so you have to choose wisely what upgrades to purchase.

Now I’m at a bit of a crossroads with this review: the difficulty.  I stated earlier that I’m not that good with tower defense games.  That being said, the first two tower defense sections in the game weren’t too bad as they kind of ease you into what you can expect throughout the rest of the game.  Beyond that however, don’t rush into things.  When you come across the tower defense area, you are given a choice as to when to begin.  It’ll make things a lot simpler to hold off on starting right away and take a look at your surroundings.  If you have the resources needed to set up traps, maybe put a turret or two out right away near passageways just as a precaution.  Some traps are considered two colors as they combine skills of two characters, so that’ll help in taking down more powerful enemies.  However, there is one other issue I have with this game when it comes to the tower defense sections: this game feels like it’s meant for co-op. 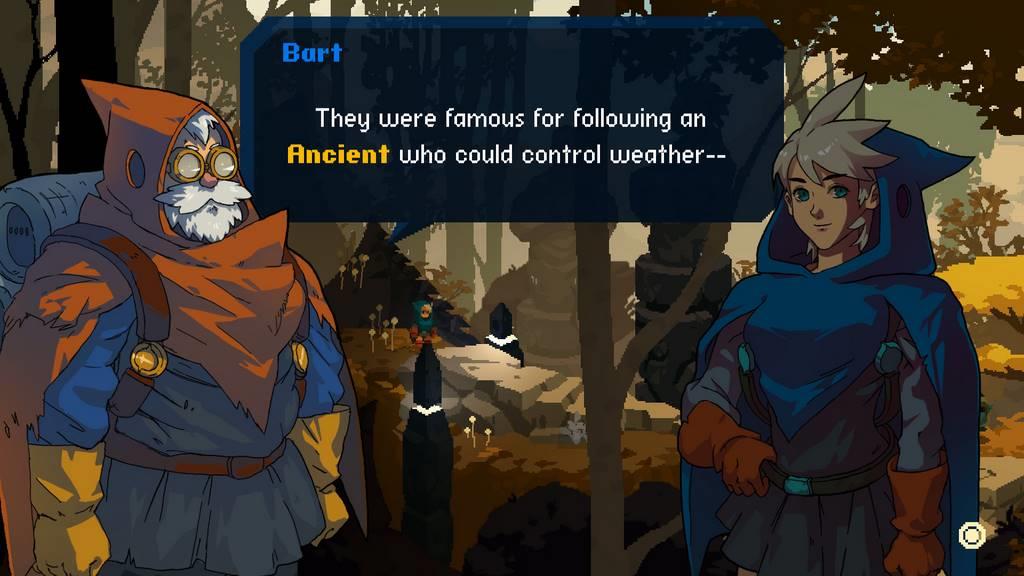 Aegis Defenders has a two-player split screen co-op mode where each player controls a different character.  This allows them to move around, gather resources, attack, and place their traps independently and simultaneously.  While I only did single-player for this review, I can only imagine how much easier co-op would be.  When playing single-player you can swap between the available characters and decide whether to have them follow you or not.  This comes in handy for some of the puzzles in the platforming sections where you have to have a character stand on one switch while you move another character onto another switch.  In the platforming areas this isn’t too bad, but when you’re in the tower defense sections and you’re trying to quickly shuffle between characters, telling them to either stay put and defend a certain area or to follow you, deciding where to lay traps and which traps to lay, and so on, it can get really tedious really fast.

So where does this put me with Aegis Defenders?  The game looks great and for GUTS Department it’s a pretty good first outing, especially with the unique mixing of platforming and tower defense.  However, my main concern is the tower defense sections.  If you’re playing co-op I’m sure this is a lot easier.  Not to the point where they’re a cakewalk, but not overly difficult either.  When playing alone though it can get pretty hectic with all of the character switching, resource management, and trap placement.  If you’re good at tower defense games, this shouldn’t be that much of an issue for you, but for those like me who tower defense games aren’t their forte, the difficulty can spike pretty quickly in those sections.  Overall though, Aegis Defenders is a good game that will take a while to finish, especially if you’re not that good at tower defense games.

Aegis Defenders is probably one of the tougher games I’ve played in recent memory, and that’s all thanks to the tower defense sections.  Fans of that genre probably won’t have too many issues, but newcomers playing alone might find those sections pretty daunting until they master switching characters, learning the arena layouts, and know what traps to use when.  If you have a friend to play co-op, you’ll likely have a much easier time.  Still, it’s a pretty good game for GUTS Department’s first outing.