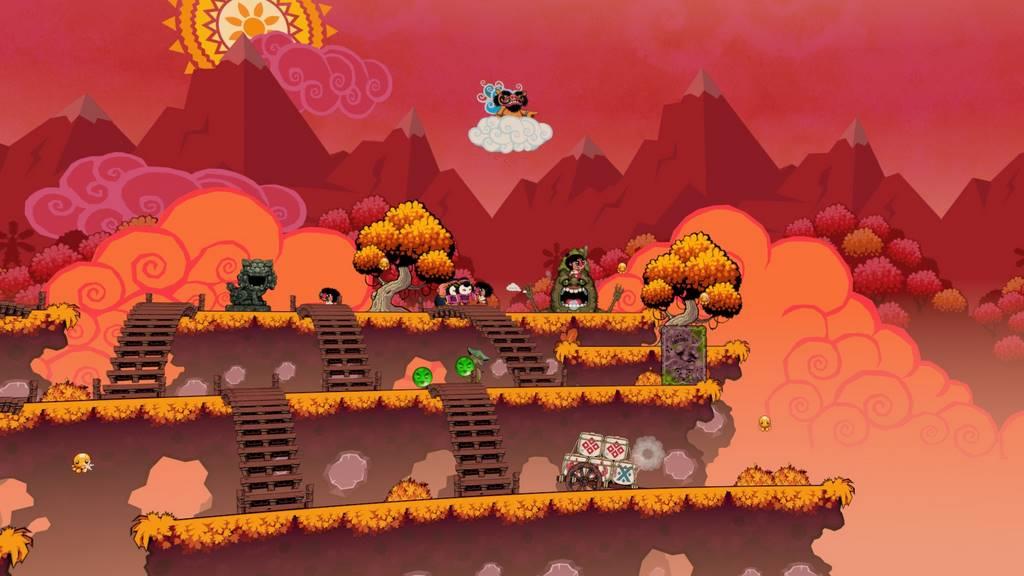 Dakku Dakku’s Pop-up Pilgrims is a game with beautiful artwork, pleasant music, and gameplay that makes me want to claw my eyes out of my skull. Well, maybe “claw my eyes out of my skull” is a bit dramatic, but I did get frustrated enough to rip my PlayStation VR rig from my head in disgust a few times. Not disgust at the game, but disgust with myself for being unable to master it. Whether this is due to my own incompetence or an unnecessarily punishing dynamic at work in the game, I’m not sure. But either way, I found my time spent on this admittedly enchanting game to alternate wildly between slight satisfaction and outright rage. I’m a man of deep emotions. I apologize in advance for any ranting run-on sentences that may follow.

As VR game design slowly matures, development groups are finding more and more interesting ways to use the tech to enhance existing gameplay tropes and develop new dynamics. Pop-up Pilgrims could absolutely exist outside of VR and would easily be playable on a television screen, but it wouldn’t be nearly as engaging.

Adapting and updating the 2012 Vita game Floating Cloud God Saves the Pilgrims to VR has some resulted in some spectacular and unique visuals. Levels and characters are designed to look like paper cut-out creations, similar to Paper Mario. Of course, in VR, it is possible to lean in and look behind the sprites, which adds a very cool visceral feel to the game. Players are given the sensation that they could actually reach out and pluck the paper-craft characters right out of the environments. The entire game is steeped in visuals and motifs lifted from Asian history and culture, though I was unable to put my finger specifically on which Asian culture I was looking at. Everything is bright, colorful, cheery and crisp, resulting in some of the sharpest visuals I’ve seen on the PS VR. 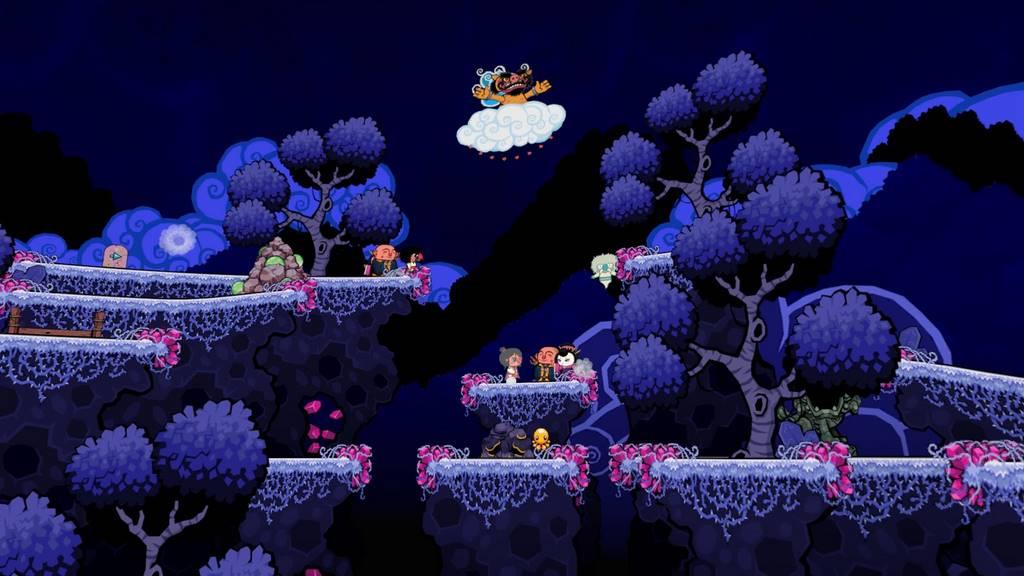 Players are tasked with shepherding groups of the titular Pilgrims from a starting point through a series of hazards and jumps to the safety of an end point.  Levels are laid out in a series of platforms that wrap around the player (picture a curved television, but more with curve than usual). Platforms also have stereoscopic depth with characters moving towards and away from the player by hopping back and forth between layers (like a pop-up book, get it?). The pilgrims all begin moving immediately when the level begins, so the player has to act quickly to guide them to their destination while keeping them out of danger. This layout prompts the player to look right and left constantly to keep track of the action, keeping tabs on both the height and depth in which their pilgrims are currently marching to their deaths. If you are having trouble visualizing all of this, picture a fancy, colorful, 3D Lemmings, and you’ll be in the right ballpark.

Players guide characters with a unique control scheme. While you never take direct control over the little happy people, you do have the ability to alter their paths by making them hop between platforms and over obstacles. Players guide a floating cloud/cursor around, which latches onto the nearest character, indicating that you have some modicum of control over them. It is important to pay close attention to which character your cloud is attached to, as the cursor is a little finicky and has a habit of switching dudes right when you are initiating a jump, causing the occasional frustrating death. 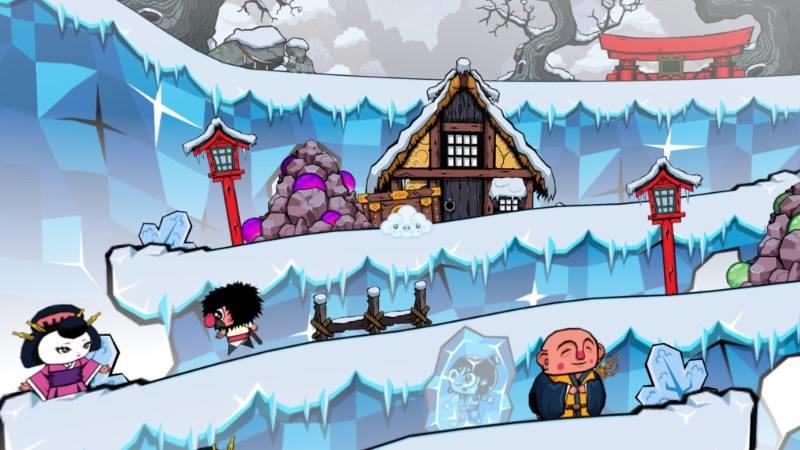 When a level begins, the first order of business is to get all of your marching citizens into a safe loop. In early levels all eight of the characters are contained within a safe area, happily bouncing back and forth and waiting for the player to come along and guide them to their final destination. Before long though, characters begin spawning in positions that will lead to their quick and untimely deaths without the player’s immediate intervention. There are enemies to contend with, and if you just leave your guys on autopilot, they will quickly march right into bad guys, killing themselves. In addition to platforming and bad guys, there are also collectables dotting the landscape, often in out of the way or dangerous locations.

As players work their way through the game, new mechanics are slowly revealed, adding greater complexity to the game. You eventually get some offensive characters, the ability to raise and lower platforms, the ability to leave floating instructions that will guide the next character that reaches them, etc. The gameplay slowly escalates in complexity to the point where it is safest to leave the majority of your guys circling in loops, and then grab them one by one and guide them through the level.

So, those are the basics of the game. Everything is attractive and well-made, and all the pieces work the way they are supposed to. I can now proceed to my primary issue with Pop-up Pilgrims, and it’s a doozy. Each of the six worlds is divided into eight levels. Players are guiding eight characters from the beginning to the end of each level, trying to grab eight collectibles along the way. There are three medals that are rewarded based on performance; bronze, silver and gold. In order to get a gold medal on a level, players need to guide all eight characters safely through the level and grab all eight collectibles. Which is fine. It is okay to have to do a perfect run to get a gold medal, because “gold medal” implies that you did very well. 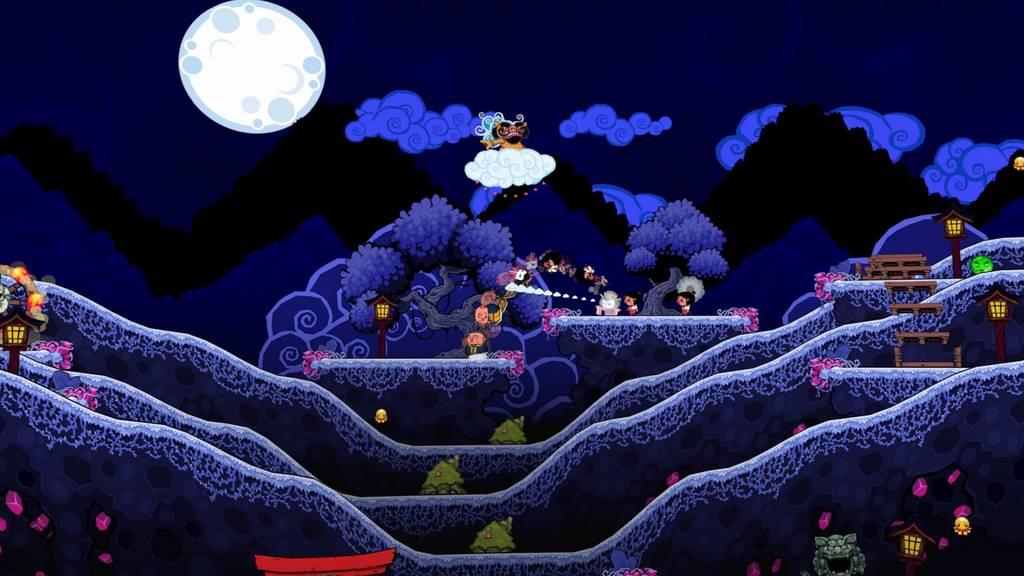 Here’s the catch. Let’s say that you are having trouble with a particular level, and you think to yourself “Okay, maybe I don’t need a gold medal on this level. I’ll just proceed with a silver medal to the next level, because I am not a perfectionist, and I don’t mind the terrible blight that a grotesque silver medal represents upon my otherwise pristine record of all gold medals. I can live with the silver-medal-shame for one level, in order to progress, so long as I get all gold medals from here on out. One of my eight guys died, but it is okay, so long as I remember to breathe and not freak out.”

Here’s what happens in this dire scenario: You start the next level with seven guys. That’s right, if a guy dies in an earlier level, he is dead for good. You can no longer get gold medals on anything for the rest of time (or until you go back to the level that you lost a guy on and fix it). The game never explains how this works to the player. I only discovered it after completing a level perfectly (I thought) and only getting a silver medal. I was…angry.

Through this dynamic, it is not impossible for players to find themselves facing new levels with one lonely character left to guide. If you have slowly lost guys as you have progressed, your starting team gets whittled down to a pathetic state. “Fine,” you think, “at least I can progress and see the later levels. I don’t need to get all gold medals. I will be happy with lousy bronze medals, even though it goes against every grain of my being and is causing me almost physical pain.” Nope. Sorry, kid. There are some levels relatively early in the game that require coordination between two characters. You see? You see what I’m saying? The game allows you to put yourself in a situation where you are starting levels with no possible way to complete them.

The only way to complete these levels and progress forward in the game is to go back and replay earlier levels to prevent the deaths of your dudes, then replay all of the levels going forward. This game structure takes what could have been a light and fun experience and turns it into a grueling slog (with a light and fun skin on it, which mocks you with it’s sunny disposition while you writhe in anger until your wife suggests that “maybe its time to take a break”).

I don’t know why Pop-up Pilgrims’ level of difficulty left me feeling frustrated instead of challenged. I just keep coming back to being offended at the idea that doing poorly on one level has an effect on the next (and every level thereafter). Playing the game, I felt almost as though my earlier failures were holding me hostage, preventing me from succeeding until finally my forward progress ground to a halt, and I was forced to backtrack.

In the end, I persevered with Pop-up Pilgrims, but I can’t say that I enjoyed it. I’m exaggerating a little with all of my “rage” talk, but I really did get a bit upset with the level structure. I don’t like to be punished in subsequent levels for something that happened early on. I don’t mind having to replay levels to get a higher score, but I don’t think that electing to move forward without doing so should carry penalties. If the game required a perfect score to move forward, that would be one thing. But it doesn’t make that demand outright. Instead, it catches you off guard by giving you some grandfathered handicaps from earlier levels, and that made all the difference between my enjoying this game and my feeling utter aggravation.

Pop-up Pilgrims is a beautiful and charming game that is pleasant for a time, until players discover that it carries some backdoor punishments for not getting perfect scores on every level. Compounding the issue, the game never explains this unfortunate mechanic, instead allowing the player to discover how things work when they are already in the midst of their punitive levels. There is no question that the game is well made, and fans of Lemmings-style games will probably find something to love here, Pop-up Pilgrims left me more frustrated than entertained.