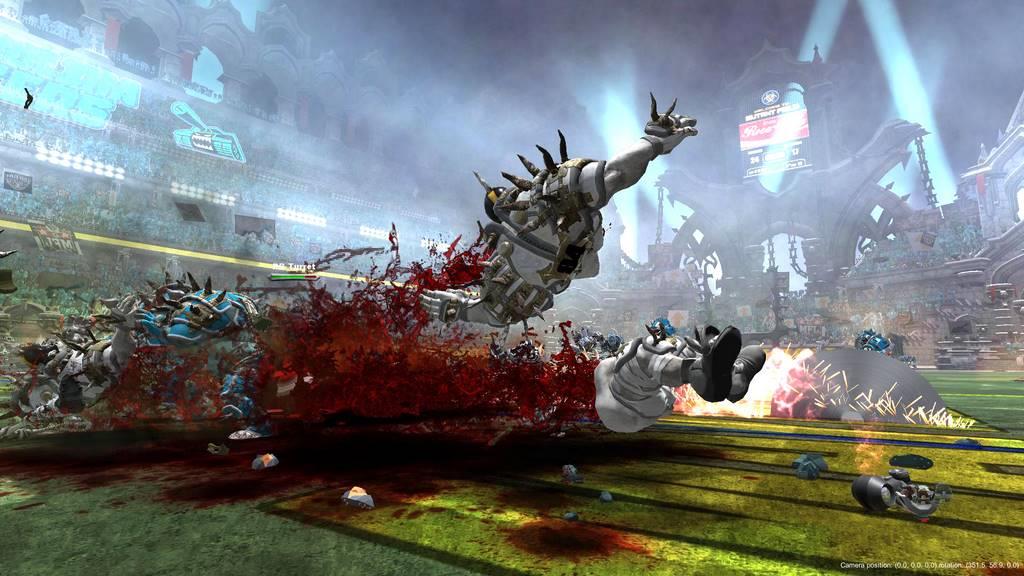 Written by Kevin O'Connell on 2/22/2018 for XBO
More On: Mutant Football League

Upon entering Mutant League Football(MFL) the first thing you’ll see are skeletons, orcs and other crazies in full football garb going through the motions of gameplay. It is every bit as silly as it sounds. This is NOT a football sim by any stretch of the imagination and it is as subtle as a jackhammer in a yoga class.

The gameplay of MFL is very much the same as some of the earlier Madden games. Offense and defense picks plays through playbook-type menus. You are able to audible, call time-outs, sub players, and create penalties just like a regular football game… and that’s where the similarities stop.

First off, the players are a mix of deadheads (skeletons), super-humans, criminal aliens, monster orcs, and bruiser bots. I played through two seasons and for the most part, the super-humans and orcs have the strength, while the others have speed. Otherwise, they are just funny to watch. The players have no statistics (like passing ability or speed) so you have to rely on knowing the player’s abilities without help from the game. Their names are also screwed up so as to match the “mutant” part of the game. So, Zack Prescott is Drak Bloodclot, Gronk is Throb Bronkowski, Sherman is Mouthy Sherminator, and Aaron Rodgers is, yes, Airbourne Dodgers. I was laughing a ton the first few games noticing all of the parody names.

The second thing you’ll notice is the league is a little different from that the NFL. There are only 18 teams and three of them are made up teams with certain races (all orcs, all aliens etc). There are also only 7 players on one side at any given time. It makes the game a ton easier to work with especially with the extracurricular plays. The last thing is that there are only 14 games for the season which makes little difference in the end.

The third thing different between MFL and normal football is the ability to kill any of the opponent’s players. Hate Tom Brady… er Bomb Shady?? Take him out. Annoyed at Slay Wrathspew (Clay Mathews) for whomping on your QB? Blow him up! The game gives you the ability to take out players at any point in the game. There are three settings for this – revive after play, revive after game, and off completely. This comes into play because each team only has a certain number of players at each position. You kill all the QBs on a team? They forfeit! You kill all the running-backs? No more running plays for the remainder of the game. 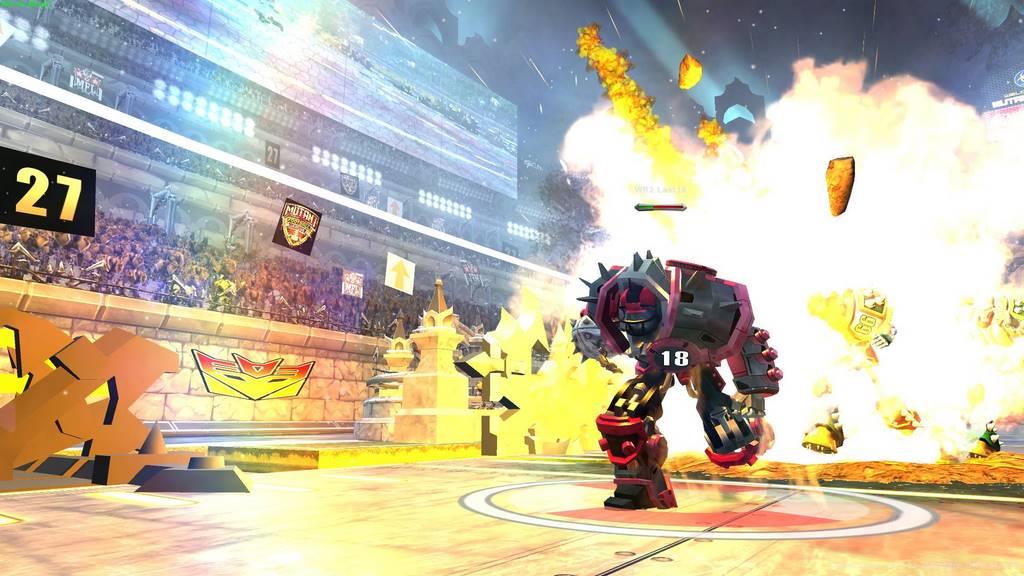 How to kill, you say? That is the easy part. There are the standard field traps to do it. So, land mines, spikes, giant worms, etc make it easy to destroy vast numbers of players. There are also “dirty tricks” to kill them. Use a "Zap Attack" to kill whoever has the ball, for example. You can also punch, power-bomb, kick or elbow-drop the player dead - which you can do anytime during the play of the game (and even after the whistle). It sometimes gets you a 15yd penalty, but if you need to get rid of Ghoulio Bones, 15yds might be worth it.

Back to “dirty tricks”. There are a set of plays that you can call to totally mess up the opponent OR make yourself a powerhouse. There are ones for offense and defense and they become crucial to the game. Some include QB sack attack, berserk, shotgun, and flame on. They are game-changers and make for good laughs. The opponent going for a field goal? Use “bribe the ref”. Once they kick, they will be called for a penalty and the FG won’t count. The opponent then needs to either re-bribe the ref or use “ref attack” to kill the bribed ref (the second one causing a 15yd penalty). So, with the bribe and ref kill used, the opponent gets a 10yd penalty and then a 15yd penalty back-to-back pushing them out of field goal range. It is a fun way to “stick-it” to the other team – especially when playing against a friend.

Then there are the announcers. They are a foul-mouthed, sarcastic, and belligerent duo that ramble through the play of game and spout one-liners and puns as fast as you can say "Hut". They call plays like they are in a game show and add to the hilarity of a game already full of it. 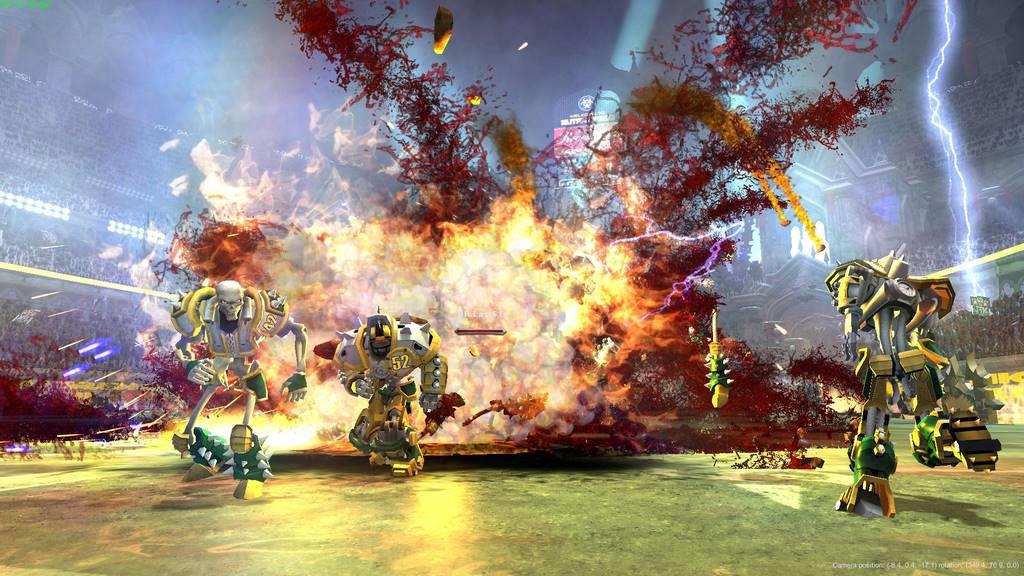 There are a few annoyances to the game, but to me, they aren’t deal breakers. The first is – for those who like keeping track of statistics (i.e. RB with the most yards) you might as well give up before starting. The game kills unmercifully at any given time. That means if you are trying to get Sven Rottenburger to have the most passing yards, he may get killed after only one play and end up with 7 yards for that game. You could use the “revive every down” option, but I think it takes away from the creativity of the game.

Another thing that is a bit annoying are the player voices. Instead of letting them speak, the game uses gibberish as their words, and gives subtitles for you to read. It would be funnier if Gronkowski said “Hey, turn the cameras on me! You want ratings or channel-surfers.” out loud vs the orc grumbling nonsense and having to read the line yourself. There are a few other small things like only one camera angle, not enough NFL teams, and poor kicking setup, but these are inconsequential when you’re knee-deep in opponent body parts.

I would say the nuances of the game felt a little unfinished too. The music is - for the most part - is underwhelming. The main theme is very generic; the play calling music is hopelessly redundant, and the credits music is forgettable. I have to say that the halftime mini-game is also disappointing. It is a choppy, top-down, stay alive game that is not only boring as heck, but way too easy to win. What ever happened to those 8-bit cheerleaders winking at us??

Mutant Football League meets a need that Madden-haters have wanted for a while. It is a game that makes football fun and in a way that makes you outright laugh at the silliness it has created. To see Ed Hockaloogie call a penalty for “excessive crotch scratching, and stop smelling your fingers, you nasty, nasty boy!” is just entertaining as heck. The game gets rid of the pretentiousness and instant replay nonsense from regular football and gives you tons of ways to smile. And I haven’t smiled like that since winning 72-0 in Tecmo Bowl.

Nit-picky things aside, you end up with a game that plays easier than Madden, is downright hilarious, and won’t break the bank to purchase. It really could use a full set of teams (then maybe some fake ones) and players that can speak English, but it doesn’t take long for the game to remind you why you are playing in the first place – to kick the snot out of your opponent by any means necessary.