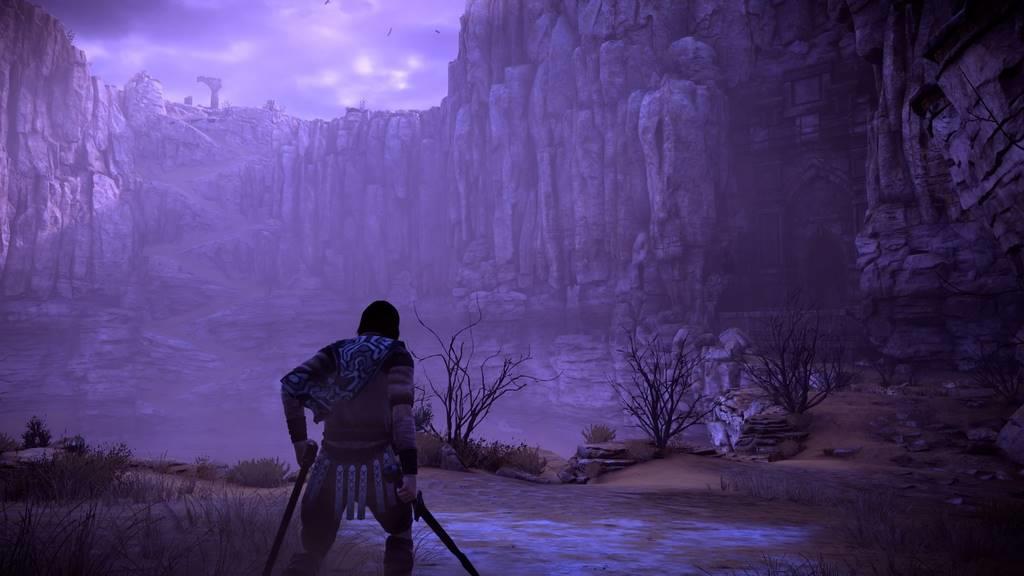 Shadow of the Colossus

Facing my giants. That’s what Shadow of the Colossus asks me to do. Now, I don’t fall for overly obvious metaphors, like "facing my giants." I’ve seen metaphors shoehorned into a thousand variations across multiple media. They don’t get to me.

And yet. Shadow of the Colossus does get to me. More than that, it just gets me.

You play Wander, a smooth-faced young man with a clenched jaw and stern look in his eye. He rocks an artful tabard, a sword and bow, and rides a trusty steed. The young man is a warrior, of devout purpose, and keeps his emotions bottled up inside. He never gets loudmouthed or emo. He’s steady. Focused. Ready to do whatever it takes. He’ll bring down these colossi—every last one of them.

The opening cinematic shows Wander on his horse, Agro, cradling a dead woman wrapped in a quilt. Whether she’s a sister or a lover is hard to tell. All we know is that she “suffered a cursed fate,” which brings us to her current posthumous condition. This exposes the hard edge of Wander’s determination to bring her back from the dead. While the sword in Wander’s hand is the compass, leading the way. It’s the key to unlocking the next, and the next, colossus.

Personally, at this point, I’m hyped. I’m chomping at the bit more than the horse is. I want to travel this exotic, distant land; meet exciting, unusual giants—and kill them.

So, I had my instructions. I got on my horse. I held my sword up to the sun, and it focused a beam of light toward my first colossus off in the distance. With a, “Hyah,” I nudged my horse into a gallop. I heard nothing but the wind in the grass and Agro's steady clippety-clop. My lungs filled with the air blowing across the plains, and my eyes grew large from the white, overcast sky.

I eventually quit fighting the camera. The view pulls away at times, settling on a dramatic angle. It emphasizes the journey rather than the destination. It ignores my need to scan everything around me at all times. The camera just takes us there with the care of a competent film director. 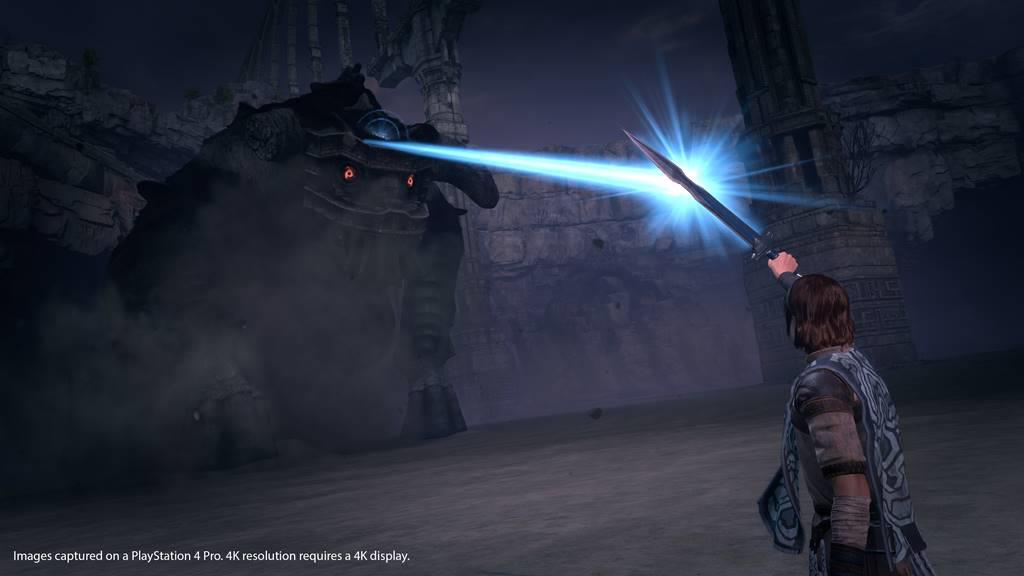 A cliff face slowly rises before me, sheer and rocky. A hint of the colossus to come. I dismount my horse. Facing a crumbling ruin of stairways and platforms, I leap, climb, and somersault my way up. My joints move stiffly, but I warm up to the movements. At the top I’m stopped in my tracks. A massive creature with muscles taut as stone, and chunks of armor wrought like iron, crosses my path. It’s enormous hooves smash the ground, leaving craters for footprints.

It doesn’t see me, but the battle has begun. The fight music rolls in like high tide. I’m running after the plodding colossus. The heart of the stringed orchestra beats faster. It towers over me like a seven-story building. I leap as high as I can just to grab the tuft of fur above its hoof, my finger pulling the controller’s trigger tight like my grip depends on it. And it does. If my pointer finger gets tired and I let go, then Wander lets go, and we plummet to the ground.

The colossus’s calf muscle isn’t its Achilles’ Heel, but, with my sword drawn, it exposes a weakness. There’s a crack in the skin, seeping with a telltale blue glow and a smoky red haze. Still holding tight with my left hand, my right pulls back like the plunger on a pinball machine. I’m poised, and the longer I hold it, the deeper I’ll drive my blade into its leg. The sword’s meter maxes out. Now. 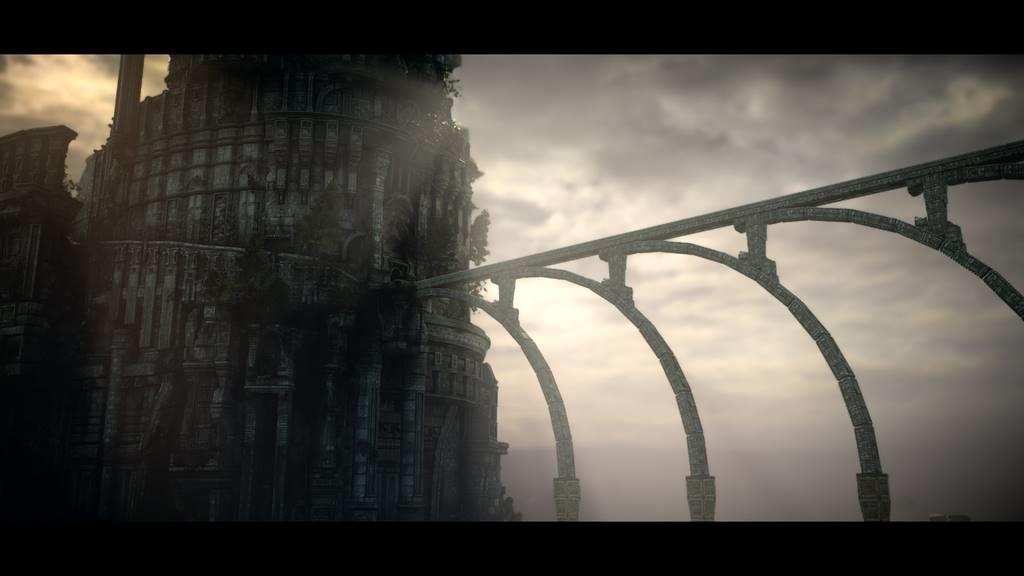 Shunk. The colossus feels that. It howls in pain. A spray of black blood shoots out like an oil geyser. It shakes its leg furiously trying to throw me off, but my trigger finger on the controller is strong. Wander is whipped side to side, up and down, but he holds on—I hold on. Even the soundtrack holds on.

I climb further, the fur on the colossus thick and wavy. I don’t know where to go, so I go up. I move from the fur to a stony platform attached to the giant’s back. I rest just a moment, Wander’s endurance spent. If I’d indeed spent all of my endurance and continued climbing, then I’d be easily shook off, and it would already be a 20- or 30-foot drop to the ground. That would be bad for my health.

I continue my ascent. I’m on its upper back. The colossus feels me crawling around and gives a full-bodied shake, like a dog shaking water off its back, twisting its mass around. I’m holding on for my life. When the colossus stops, I continue my crawl up. I’ve reached the top of its head, the ground a vertigo-inducing distance below. I see the telltale blue glow of the colossus's vulnerable point. 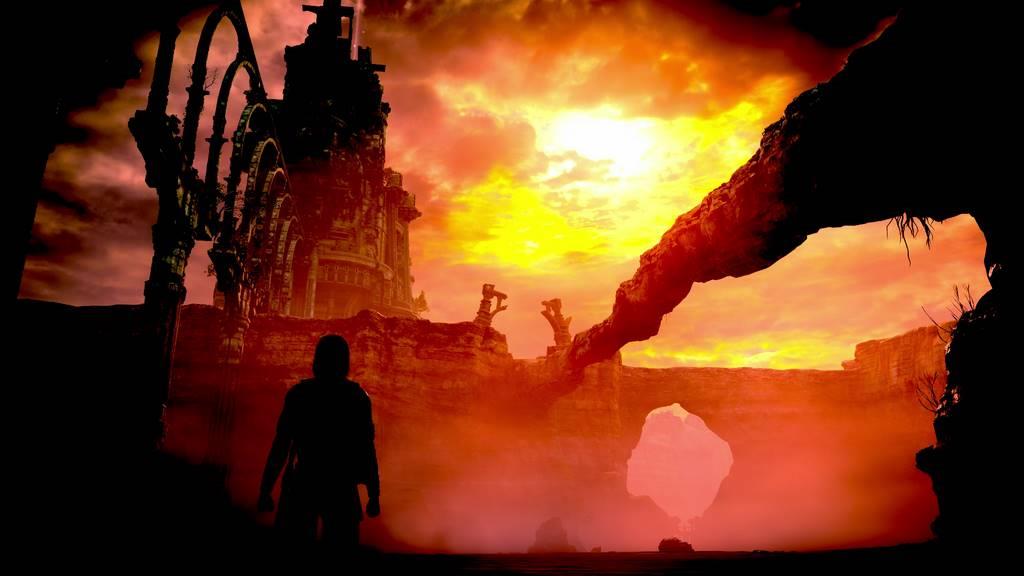 The colossus then shakes its head violently, but I hold on. My endurance is nearly exhausted from all this crawling and vertical scaling, but this is my chance to end the fight. Clinging to fur atop its skull, I pull my sword arm back. I’m poised to drive it deep into its brain.

Shunk. The sword goes deep. The colossus howls, furious and in tremendous pain, its health meter just absolutely wrecked. My stab opens up another spout of black blood. One more time, I think. In its death throes, it madly shakes its head, but it can’t throw me off. And then I plunge my sword into it for the last time.

Shink. The sound is different this time. Everything slows down. The music goes from a battle cry, to dead silence, to heartbroken defeat. This isn't the victory music I'm expecting. The camera pulls away and I watch this beautiful creature slowly fall to the ground. The camera is back on me, standing beside the fallen colossus. A blackness spreads from its head down the rest of its body, like it’s being burned into ash. Thin, black tentacles come out of the colossus’s dead body, twist maniacally in the air, then turn to me. The tentacles violently impale me and a spout of my own black blood sprays out. I fall on my face. I soar through a black tunnel carved with symbols of light. My body appears, still face down, back at the Sanctuary. A dark, mournful shadow stands over me. Not menacingly. But like it’s standing there, head down, for my funeral.

The camera pans to the Sanctuary statue representing that first colossus. The statue explodes with an inner light and topples straight down on itself. The camera pans back to me. I get to my feet. It always takes too long to get to my feet, whether here or in battle. I look up at the light flooding down into the Sanctuary. The voice comes at me with no preamble. It simply announces my next foe. I will do this 15 more times. I will ride out to a colossus, destroy that colossus, be destroyed myself, and be pulled back into the Sanctuary until the dead woman lives again. 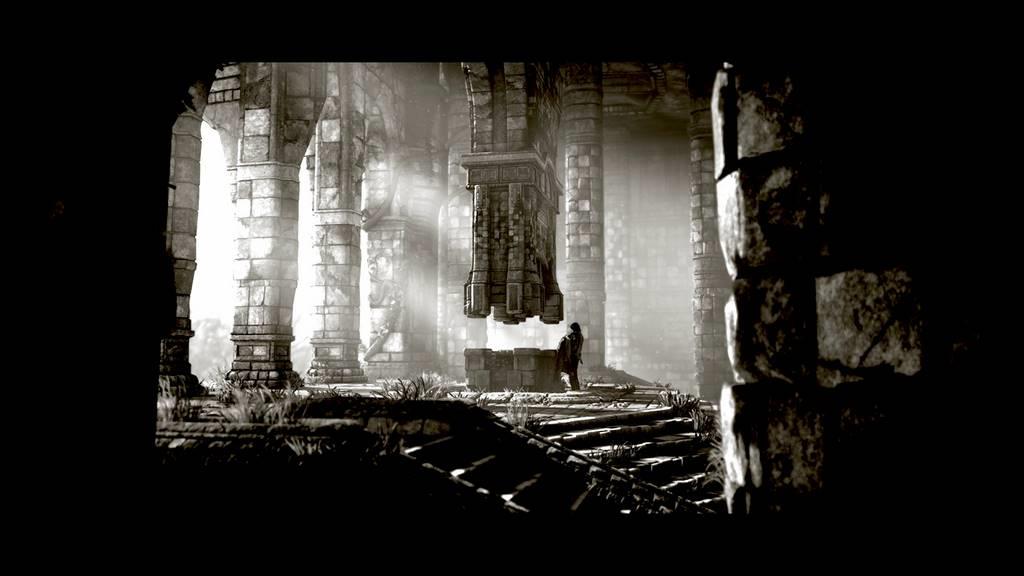 It’s a stunning gameplay loop. It’s not relentless, but it’s merciless. There’s no split narrative here. No dialogue trees branching out toward multiple endings. It’s just this and nothing else. So, I make the map my own. I topple colossus after colossus and, as I ride out to the next one, I look over their sand-covered corpses. I break statue after statue like it’s the opposite of a trophy room. I die every single time and come back, just so I can resurrect the woman I brought here.

I emphasize the battles with the colossi, but my favorite parts were the horse rides in between. With just rocks, trees, and grass, the map makers built a fantastical landscape rooted in down-to-earth details. My horse is dependable in ways I didn’t preempt. I run and scatter the flock of doves gathering in the Sanctuary. I shoot fruit off a tree, the tail off a lizard, and kneel at every glowing shrine. I dive into the waves of an enclosed bay, run across the crests of sweeping golden dunes, and stand on ledges that go down forever. The landscape is bravely designed and tells its own saga. I ride Agro through tall, dense woodlands where the sun can't reach the ground. I race across vast plains, with nothing in between but the call of the wild.

Sure, puzzling my way through each colossus’s destruction is a worthy capstone to any trip. But Shadow of the Colossus is equally about the journey. A gorgeous, remastered, HD, 4K journey. A rebuilt from the ground up journey. One that could’ve been released today (for the first time ever) and stood shoulder to shoulder with any brand new game going up on store shelves. It's thoroughly modern. Visually complete. Two modes exist on the PS4 Pro: Cinematic, which emphasizes image quality, and Performance, which emphasizes frame rate. Cinematic gives you a 4K image targeting 30 frames per second. It stays locked into that 30 fps, even during strenuous scenes like colossus battles. Performance, however, is locked at 60 fps and is butter-smooth from top to bottom. You will be hard-pressed to come up with any amount of slowdown or screen tearing. Even if you're on a vanilla PS4, you get 30 fps with Performance-level visuals, which, trust me, are phenomenal anyway. The developers have nothing to be ashamed of there.

Don’t be discouraged if you’ve never played it before. I hadn’t. But now, 12 years after its debut, Shadow of the Colossus easily—easily—goes on my greatest of all time list. It’s not too late. It’s time to face your giants.

Shadow of the Colossus is one for the books. Twelve years later, it's still a powerful, immutable, singular experience. A masterwork of the genre.