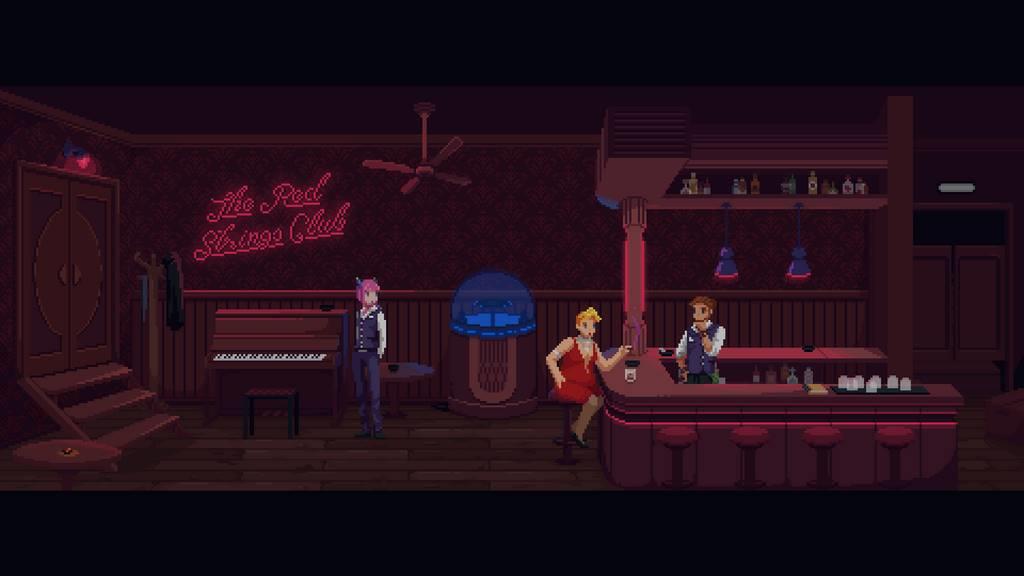 The Red Strings Club is not your typical point and click adventure game. You won’t be sleuthing through crime scenes, combing for evidence. You won’t be mashing obscure items together in the exasperated hope that they’ll complete an inane, convoluted logic circuit and advance the plot. You won’t even be dodging puns and smarmy dialogue from a tongue-in-cheek caricature of a celebrity or comic archetype. As much as I love the old Lucasarts adventure games, Deconstructeam didn’t want to make that kind of game. Instead, their sophomore effort is a cyber-noir examination of free will, social engineering and biological implants.

Unlike Deconstructeam’s first game, Gods Will Be Watching, Red Strings Club isn’t as unforgiving. There are no true fail states, so while you can make poor decisions within the game, the consequence is losing out on more of the story, and the plot is the main focus here. Red Strings Club takes place in a typical dystopian cyberpunk future. The obligatory oppressive megacorporation, Supercontinent Ltd., manufactures bio-implants to cure whatever ails you. Whether you want more sex appeal, a higher subscriber count or just want your sense of social morality extinguished, Supercontinent has a gelatinous pseudo-organ to fix your problem.

These implants are fashioned by androids with the express goal to make their clients happy. You start the game as one of these androids—Akara 104—using point-and-click gameplay to fashion bio-gel into implants using a lathe, as one would craft pottery. After doing your job for around half an hour, you are interrupted by a rogue freedom fighter who has infiltrated the implant patient list to wreak havoc on Supercontinent’s plans. After a deadly turn of events, you barely escape the lab alive, as it were.

Akara shows up, sparking and severely damaged, on the doorstop of the Red Strings Club, and this is where the game’s second phase of gameplay begins. Here you play as Donovan, proprietor and bartender of the club. After Donovan and his boyfriend Brandeis hack into Akara and learn what has transpired, they decide to probe deeper in Supercontinent’s business. Brandeis is a cyborg, so he gets to hacking, but Donovan uses a different method. Donovan is an information broker, and he’s also extremely skilled at plying his patrons with drink and sussing out secrets and other juicy details when they have been placed in the appropriate mood. 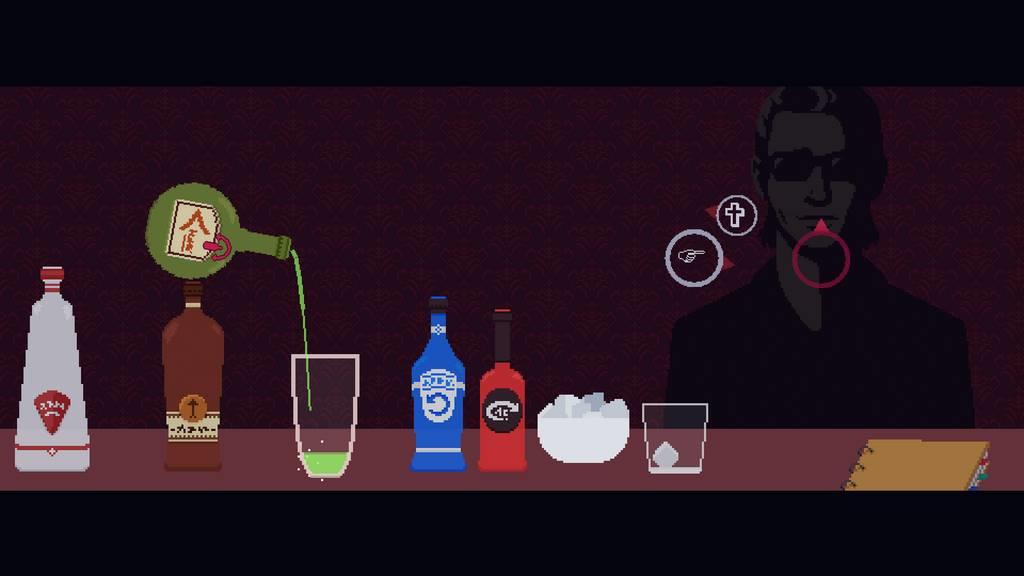 This section consists of the meat of the gameplay. As Donovan you use four basic spirits, ice and other mixing tools and techniques to shift an icon back and forth, lining it up and resizing it until it hits one of your subject’s emotional states. Want them cocky and bragging about that secret project at work? Ply your customer with their favorite liquid courage and watch the info spill out. Want them paranoid and jumpy? Serve them something sour to enhance their suspicion, so they let slip a careless detail in their hurry to get home. As you work your magic you need to pay close attention to two narratives—the one your customer is telling, and the overall truth that you’re piecing together.

As you work, the true sequence of events are literally strung together with red thread, allowing you to pull up a “conspiracy web” flowchart at any time to track what you’ve already learned. You need to be careful, however, not to scare off a customer or ask the wrong question when they’re in the wrong mood. You can’t just keep hitting that conversation wheel until your notebook is completely filled in with errant details. Ask something too brash or sensitive when your subject is in a sore state, and they’ll close off, removing that line of inquiry. 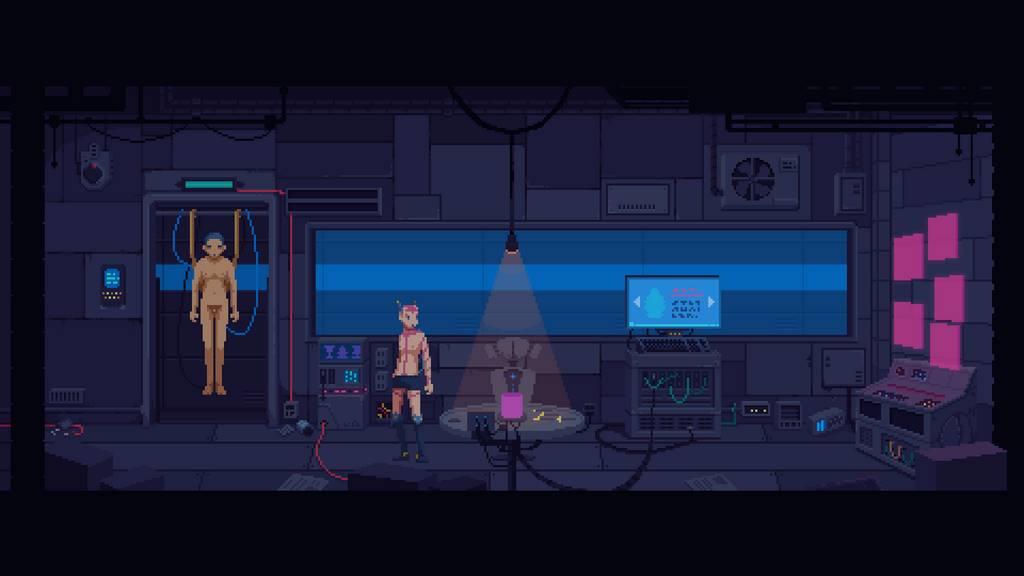 This was definitely my favorite part of the game, as I love conversational puzzles and the metaphor for how alcohol influences mood and information was pretty brilliant. There’s a ton of subtlety here and you’re bound to miss a few threads on your first and even second playthrough. That said, some of the political themes and messages were a touch heavy-handed for my tastes. Call me sensitive, but I feel cyberpunk is best when the morals and motivations are consistently gray and shadowy. It’s an important tie to the genre’s strong film noir and detective story roots: no matter how innocent or vulnerable someone looks when they first walk into your bar, nobody is lily white, everyone has an angle they’re working and no one ever tells the whole truth. I appreciate that Deconstructeam is dealing with some heavy and difficult subjects here and they wanted to put those across, but I personally would have preferred a touch more ambiguity here and there.

The third gameplay section happens at the end, where you’re playing as Brandeis making phone calls and impersonating people. Basically the more you learned earlier will allow you to better tackle the conversations in this section, choosing the right strings of information to finally piece together the whole picture and influence the major players of Supercontinent. My main issue with this finale, so to speak, is that the game really only has one ending. Again, Deconstructeam has a narrative they’re building and I understand that, but with so many plot threads early on I was hoping for multiple playthroughs to be a little more meaningful. 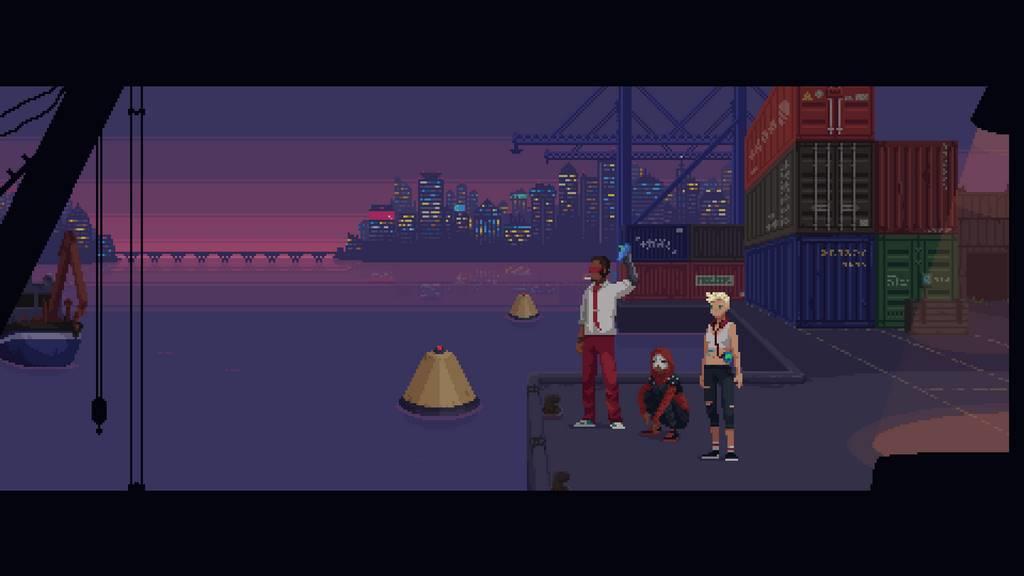 Regardless of my qualms with the plot and its resolution, Red Strings Club is a beautiful game to look at and listen to. The pixel art is really quite subtle and well done; each character is elegantly constructed and animated and I like the actual look of the game a lot better than the promotional art for it. The noir influence drips from the screen, whether it’s the intermittent flashes of lightning outside Brandeis’s apartment window or the dingy, yet somehow comforting atmosphere of the club itself. Deconstructeam has some very talented artists on staff and I’d love to see them continue in this genre and art style.

I’d say my main takeaway with Red Strings Club is that I wish there were more to it. Like a lot of narrative and message-heavy games the story itself is disappointingly short and there isn’t a whole lot of “game” in there, and what exists is a mixed bag. The bartending minigame was addictive and oddly satisfying, but sculpting the bio-implants went on for too long and was floaty and fiddly, and Brandeis’s social engineering calls lacked interactivity.

Red Strings Club is a worthwhile three-to-four hours for $15. The story is told pretty well and it’s fun to tease out of the various conversations and vignettes it presents. The writers leaned a bit too heavy on a few of the points they were making to suit this old gumshoe’s gray noir tastes and I really wish there were multiple endings, but overall it’s an enjoyable visual novel with an impeccable sense of style.

Red Strings Club is more of a visual novel than a true adventure game, but its roughly four-hour story will give you some topics for your brain to chew on. The conversational gameplay, not to mention the drink mixing minigame, are a lot of fun.