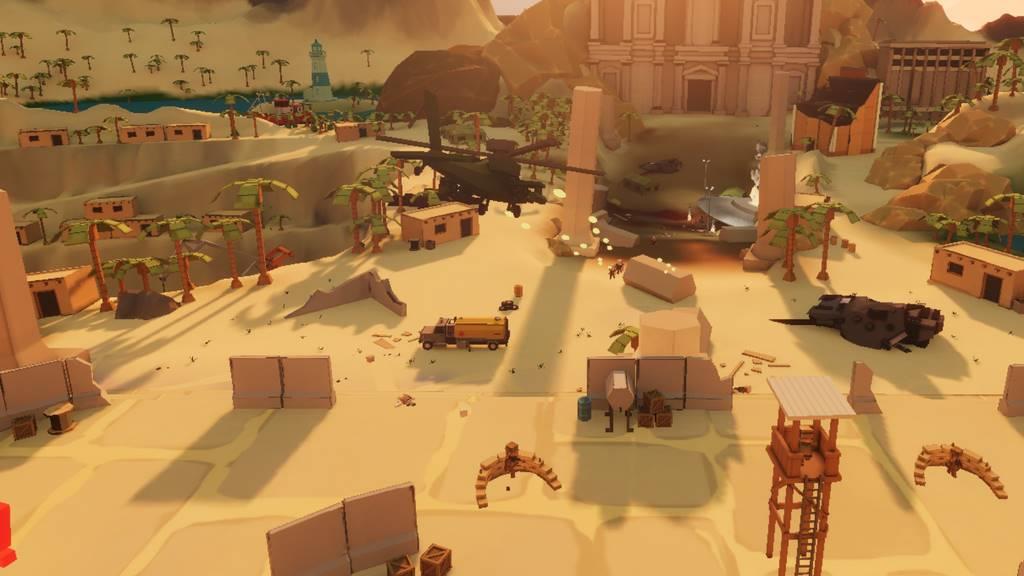 Out of Ammo, out this week on PS VR, was originally released as a HTC Vive exclusive. An early entry in the VR gaming space, Out of Ammo was released in Early Access on Steam before the finished product was launched in 2016. Developed by RocketWerkz, the game was picked up for distribution on PS VR by Zen Studios as part of their “PC to console publishing” initiative.

The structure of Out of Ammo is interesting. Players begin each of the eight offered levels hovering like a god above a miniature army base that will soon come under attack. These gameboards can be selected by the player at will. There is no order or progression, and no need to unlock subsequent levels. Each scenario plays out like a tower defense game, with players strategically placing provided structures and soldiers around their headquarters. Waves of enemies attack from all directions, intent on blowing the HQ to kingdom come. Soldiers remain at their designated posts and defend the headquarters to the death. A helicopter occasionally swoops down and delivers additional structures and soldiers. Players defend the base for as long as they can, until they are eventually overwhelmed by the opposing forces. Attacks slowly intensify, so every attempt inevitably ends in defeat. The challenge is to see how long they can last before being overrun. Neither structures nor soldiers can be upgraded to compensate for the stronger enemies that appear as the game goes on, so placement is key.

There are five primary soldier types; your standard gunner, snipers, rocket launcher dudes, medics and builder guys. Medics rush around keeping up the health of the combat soldiers, and the builder dudes construct the new structures dropped by the helicopter and do their best to keep everything from falling apart. The other guys man various bunkers and towers that you place around your HQ. 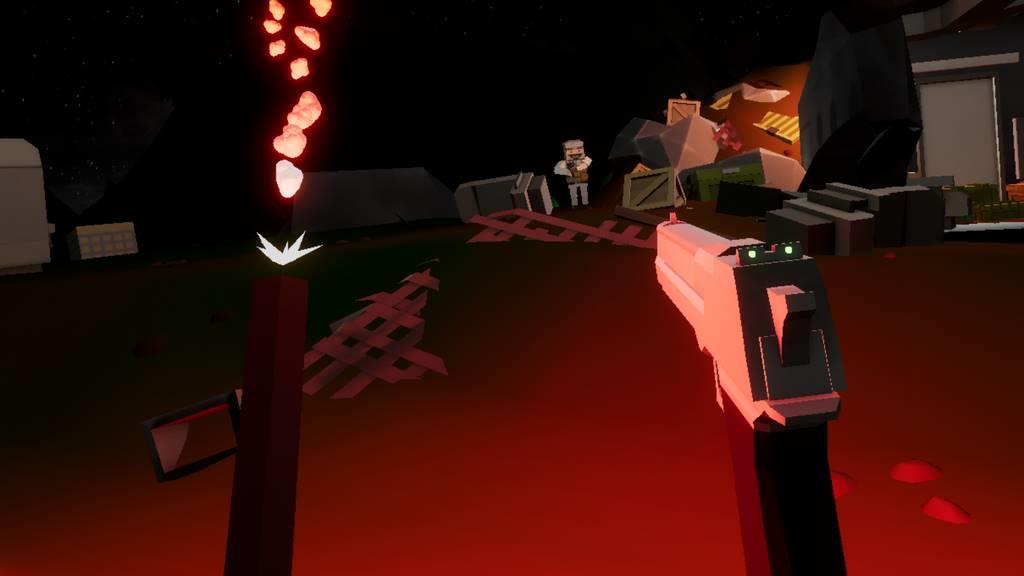 In addition to structures and dudes, players also have access to a few other limited powers that I tended to save for emergencies. Players can activate an artillery strike on an area (great for taking out tanks), strafe an incoming wave of baddies with a helicopter, or direct a very precise sniper shot from the aerial view.

From the overhead viewpoint, the play areas look incredible. While soldiers are little blocky guys (think Minecraft), the eight environments are nicely detailed and varied. From the players’ hovering perspective, the play world looks like an awesome diorama made from toys and models. The lighting and sound lend a real sense of mood, and most of the battle arenas extend off into the horizon, giving the eerie sensation that attacks can come from anywhere. Tiny tanks lurk in the woods behind tiny trees. Tiny trucks appear from the distance to bring new waves of bad guys. Tiny snipers appear on distant hills and structures to pick away at your team. When you put it all together, the overall sensation is a mix of wonder, playfulness and an odd suspense. 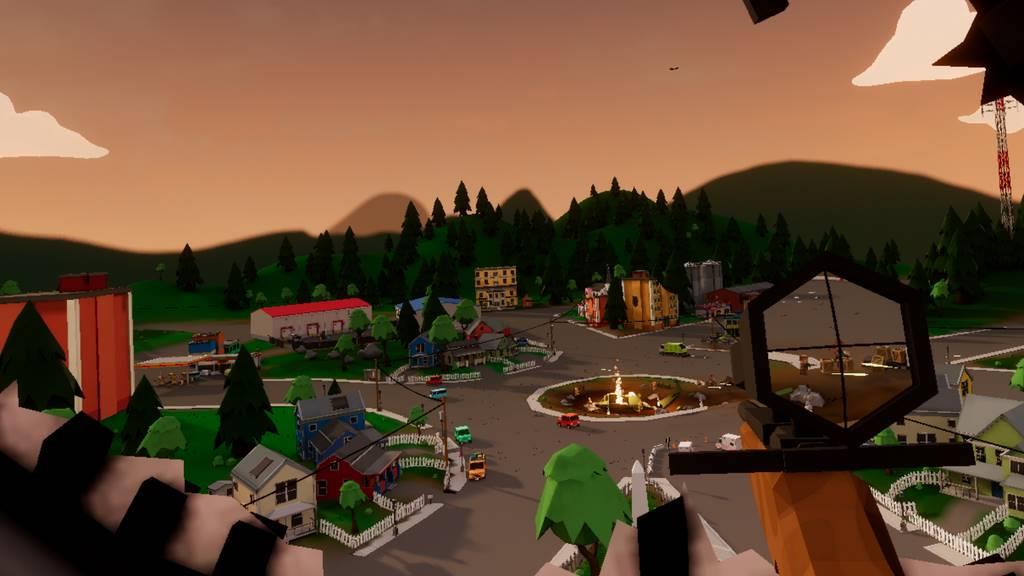 Out of Ammo has a great hook. In the midst of battle, if you sense an area is having trouble keeping up (or the AI is being stupid), you can tag a soldier down below on your little battlefield and possess him, snapping the play into first person. Suddenly, the distant battle is right in your face, and you are responsible for clearing out enemies yourself. Each weapon handles differently, and even the medic and builder guys have small arms to protect themselves and turn the tide of battle. Popping into the body of a sniper in a tower and taking out an entire wave of bad guys feels amazing.

All of this sounds great, and there is real fun to be had with this title. But unfortunately, there are some serious usability issues that hold me back from whole-heartedly recommending Out of Ammo.

Most of these problems stem from the fact that this is a Vive game, ported onto PS VR. Vive games are designed to be played in a full room, and PS VR games are not. What this means on a practical level is that many aspects of the game feel simply broken. When you are standing in the midst of an army base, and the virtual play area extends beyond the scope of your PlayStation Camera, you find that there are areas you need to reach that are in a “dead zone”. This is a game that was built for players to move around the room, examining and interacting with their surroundings in a very dynamic and active way. PS VR simply does not allow for that sort of mobility. I countered some of these issues by starting the game much further from the camera than I typically would, but even standing up to 10 feet away from the camera, I ran into usability issues. I would reach out to place a structure, only to have the controller move outside of the range of my camera. 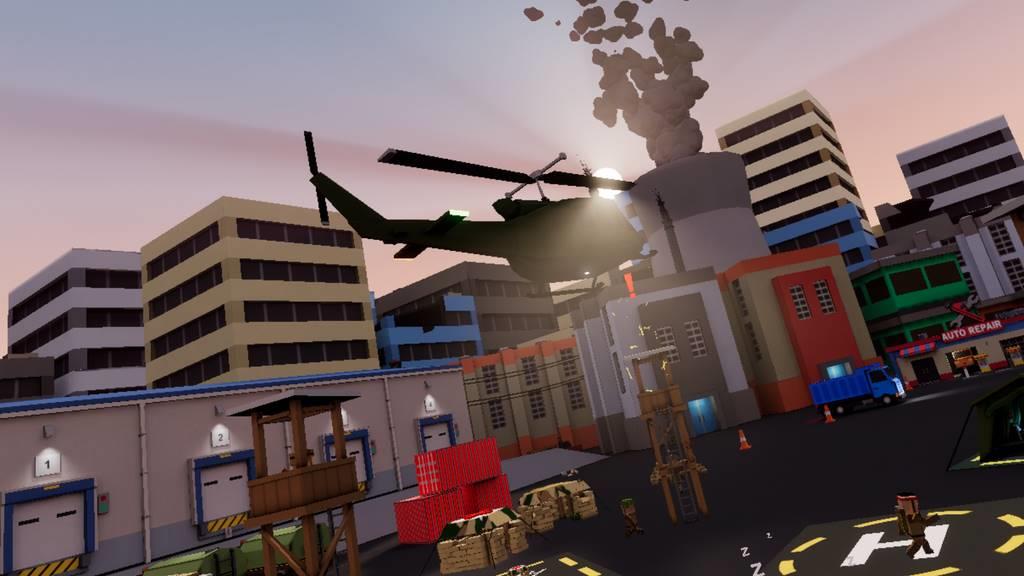 While the camera issue is the result of porting a game onto a system with different playability parameters than the original, I encountered many other frustrating bugs during play that were unrelated to this issue. When possessing a soldier, players are responsible for reloading their weapons, which might have lent a real tension to the first-person combat. But in practice, the game did not recognize my hands very well, turning reloading into an excruciating chore instead of a pressure packed action moment. My controller/hands would slip right through the bolt on the sniper rifle, for example, no matter how carefully I attempted to grip it. And reloading the heavy machine gun is a lesson in frustration. I spent at least 15 minutes in the tutorial fumbling around with it before I figured out the method that I was supposed to be using, but even after I was familiar with the games expectations, performing the task still felt as though the game was actively trying to prevent me from succeeding.

After many attempts to play the game as it was intended, I eventually gave up on the first-person perspective and played the game as an overhead tower defense game, to some success. I feel into a nice rhythm, and was able to survive for quite some time, relying on careful placement in my encampment and judicious use of my artillery, strafe and sniping powers. When absolutely necessary, I would jump into the guy with the rocket launcher, which was easy enough to reload, but restricts players to three shots before it bounces them back to the overhead view. 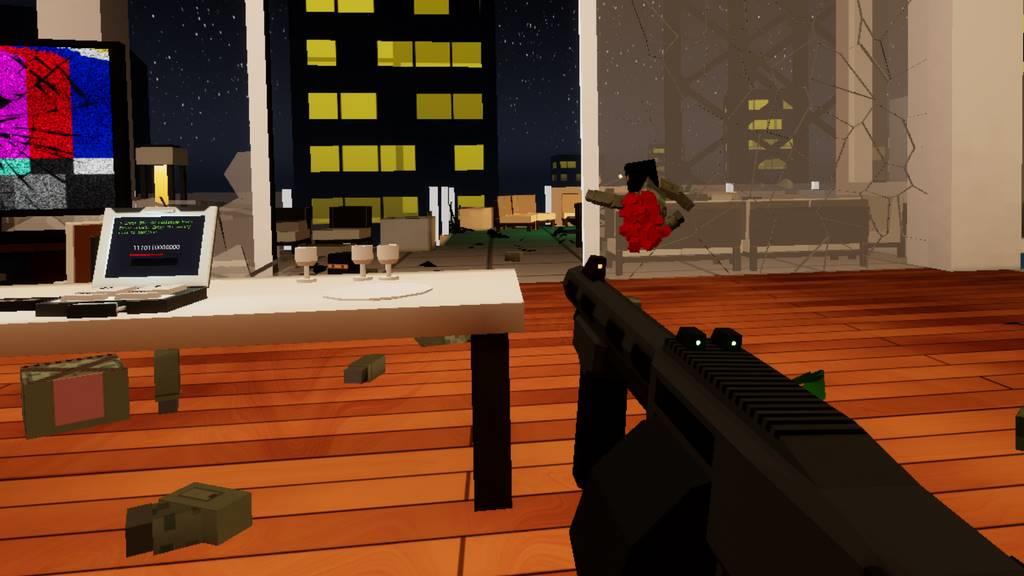 Other strange things occurrences stopped my game cold. One time, the helicopter simply stopped bringing me supplies and soldiers. It would swoop in and land, only to take off again without giving me any stuff. On another occasion, I got a game over state well before my Headquarters’ hit points were depleted. Yet another time, my game ended but the UI to leave the session and start again never appeared and I was left floating above the battleground, endlessly staring down at my burning HQ until I finally turned the game off.

In addition to the eight primary maps, there are three specialized missions that focus on different aspects of combat. However, I found each of these to be unplayable in their own ways. In the most memorable of these scenarios, players are positioned in a church steeple with a sniper rifle, watching over a team of soldiers below while they complete their mission. As your team tries to carry out their mission, other guys spawn in and try to take them down, and you defend them with the rifle. This mission has a great sense of atmosphere and tension, combining the first person shooting with the gods-eye view of the tower defense game. Unfortunately, eventually other snipers appear to start sniping your team. This would be fine, except that one particular guy spawns off to the left of the tower, well outside of your field of view, and proceeds to start sniping you through the wall of the steeple. His laser sight literally comes through the wall. The only way to take him out is to lean far outside of the tower and attempt a side shot. And as far away as I started on this mission, I actually collided with my TV trying to make this shot.

The two other missions had other problems. One of them takes place in the dark countryside, and has the player seeking an object to progress that I simply could not find. The other has the player defending a plush apartment as guys appear on stairwells and elevators to attack. This mission was so easy that after a half hour of standing behind a bar and casually blasting wave after wave of bad guys, I simply stood in the middle of the room and let the enemies kill me. I suspect that it would have never ended otherwise.

I imagine that Out of Ammo is a ton of fun on HTC Vive. The bones of a good game are in there, and despite all of the technical issues I encountered, I did have some fun with the title. I would guess that a lot of the issues I have experienced with the game might be resolved with a post-release patch or two. But as I played it, the PS VR version of Out of Ammo borders on unplayable.

Out of Ammo stands out as an example of a VR port gone wrong. While the core gameplay is fun, the room-sized parameters of a HTC Vive game simply do not work well on a PS VR. Playing this game feels like standing in the parking lot of an amusement park with no ticket. You can see the fun just inside, but you can’t quite reach it.