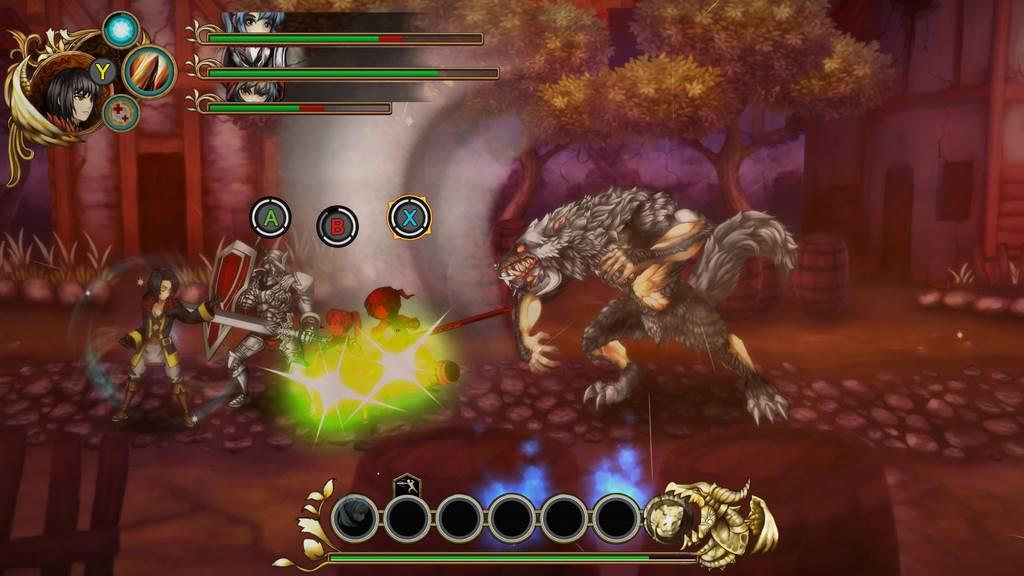 I sort of failed in my efforts to find more Indie games in 2017. Unfortunately the AAA game space released a few too many good games that ate up my time. However, there was one title through the year I tried not to ignore, Fallen Legion. This game was released back in the summer for the PS4/PS Vita, and while I bought it at launch, I never once fired it up on either console, and that’s a shame because I was hooked by this game at glance. Any game that’s going to offer me a combat system that’s similar to Valkyrie Profile is going to get my attention, and after the disappointment that was Exist Archive, I was tentatively excited for Fallen Legion.

Under the new title of Fallen Legion+, this PC package includes the base game, Fallen Legion: Sins of an Empire, which follows the story of Princess Cecille as she fights against both family and foe after the unexpected death of her father, King of Fenumia. With the grimoire he once possessed now in her hands, she must balance the politics of the kingdom, while also stopping a coup by the Legatus who betrayed her, Laendur. Her battle, and my choices would either save or destroy the Kingdom of Fenumia. In Fallen Legion: Flames of Rebellion, the roles are reversed and as Legatus Laendur, the Kingdom of Fenumia looks quite different, and ripe for a regime change from the squabbling princes and Princess Cecille. This game was originally exclusive to the Vita, and effectively doubles the playtime of an already decently sized campaign, which took me a little over eight hours through on my first playthrough before switching over to Laendur’s story arc. This game is also teeming with secrets in the form of new Examplars and has a new game plus mode.

The big hook of this game is its combat, which borrows heavily from the Enix classic, Valkyrie Profile. Fallen Legion is an excellent homage that adds a few new interesting mechanics. In between story beats it’s a non-stop fight against hordes of enemies. Armed with the souls of heroes past, Cecille is able to defend herself in combat. The twist here is that Cecille herself doesn’t do the fighting, but is able to cast spells from her talking grimoire (which has quite a mouth, and insatiable hunger for human souls). These spells can damage enemies, heal her own units, or revive fallen comrades, but if her defenses fail, she’s in for a quick death. 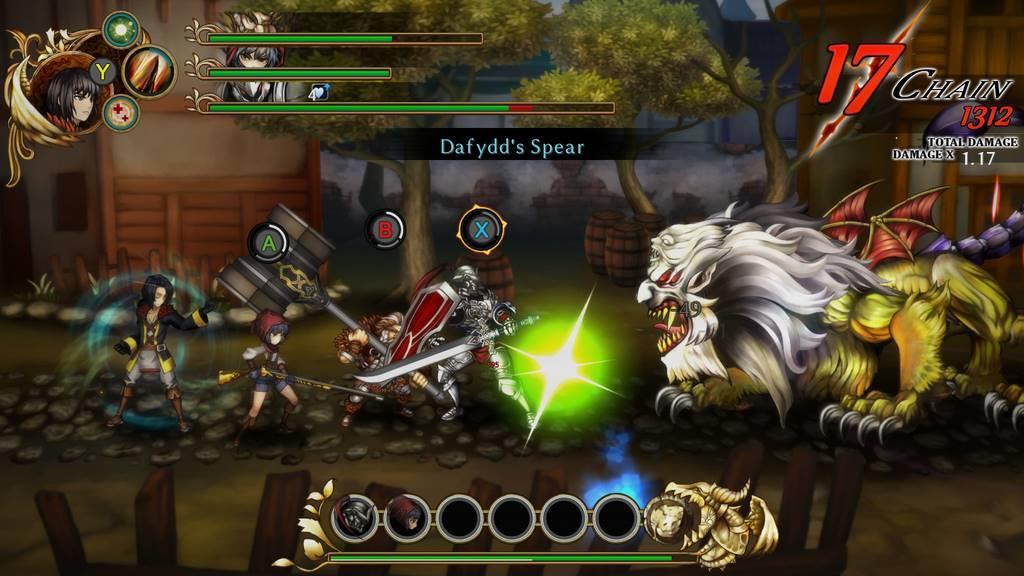 Wielding her exemplars is a delicate balance between offense and defense. By chaining attacks together with the exemplars mapped to the corresponding buttons the combo counter will increase and allow the exemplars to use their deathblows, powerful skills with additional effects. But taking any damage will reset the combo counter, and you cannot just endlessly mash buttons, as each exemplar has a cooldown between attacks. This is where playing defense comes in to play. By timing blocks perfectly, the enemy attacks are parried, leaving them open to counter attack, and restoring attack points to the exemplars. This is a game that doesn’t reward aggressive behaviour, but instead rewards pragmatism and careful analysis of the enemies. Some telegraph moves, others are a bit more erratic (I’m really not a fan of the pitchfork wielding farmers), making it harder to string together a decent combo, and if you’re playing the game’s One Life mode, you can expect an unforgiving death if you’re not careful.

In between some fights, the game presents political choices that the player can make, and these actually have consequences, some of which might not be immediately visible, but can come back around to help or hinder depending on the choices made. Each of the three choices presented will restore health and have an effect on one of your exemplars, giving them more HP, or higher strength or defense for the duration of the battle stage. These choices also have an effect on Fenumia as a whole, and will raise or lower the morale of the people in the Kingdom. 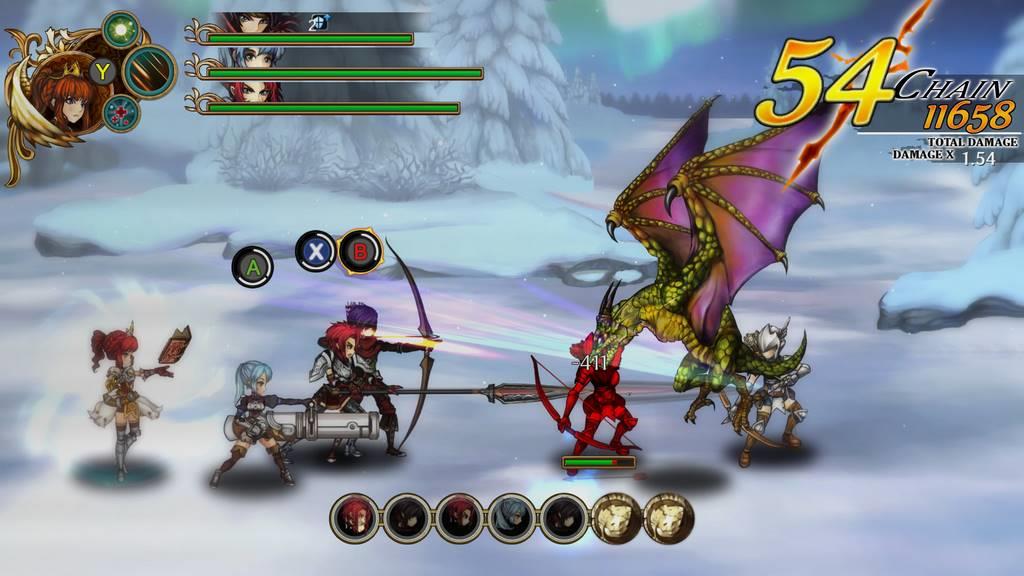 Fallen Legion+ is a game with beautiful 2D hand-drawn artwork, giving a similar vibe to games like Odin Sphere, and Dragon’s Crown, although it’s a little more spartan. This game looks quite good in motion, but it’s a little disappointing to see frame-rate drops when there are too many effects on screen, even with a reasonably powerful computer like mine. It seems like whenever there is some sort of fog or mist overlay effect, it causes slowdown. Beyond that, for an Indie title, this is rather good looking. The audio is also quite good, with some pretty good voice acting, and a rocking soundtrack that sounds like an excellent homage to Motoi Sakuraba, with a combination of rock, synth, and orchestral sound.

Fallen Legion+ is a great example of a developer focusing on one key aspect of their game and totally nailing it. I think the gameplay is solid from start to finish, but it has to be something you’re into from the start. This isn’t a typical battle system and it has much more depth than it initially shows. The morale system that’s tied to managing the kingdom also helps keep things interesting. Couple this with the fact that Fallen Legion is a great looking game with a fantastic soundtrack, and you’ve got an indie success story waiting to happen.

Fallen Legion+ is a great value for an indie game, and it also happens to be a pretty good title to boot. If you're over turn based battles and want something a little more fluid that also looks great, then this is a great investment of your time and money.