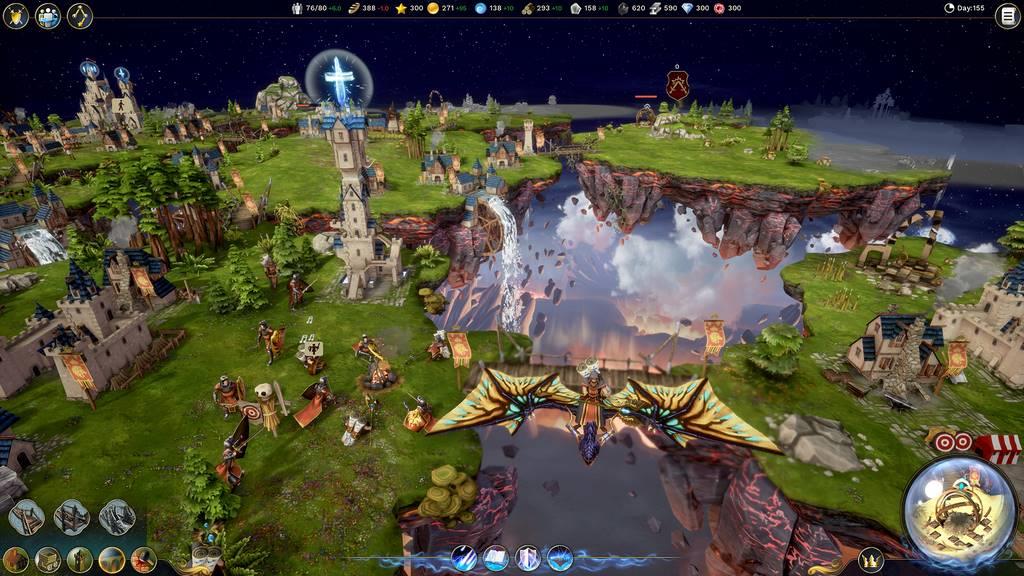 Written by Tom Bitterman on 1/19/2018 for PC
More On: Driftland: The Magic Revival

Driftland: The Magic Revival (Driftland) is not all that interested in solid land. In fact, wanting a stable empire is discouraged. So is the idea of being able to directly control your units. The whole gestalt of the game is indirect control and going with the flow.

The first thing one will notice upon starting is that you only own a tiny island, and the surrounding territory is pretty much buried in the fog of war. Sure, there is a spell that will dispell said fog, but it costs mana to cast, a resource of which you are in short supply. Reality soon dawns – the entire world is made out of these islands. They appear to be floating, although it is not clear on what, exactly, or how they continue to do so.

Luckily, you have the ability to cast a spell that will bring islands closer to where you are. At that point you can build a bridge across from your home island to the new island, thereby adding it to your kingdom. This is a good thing, as islands provide resources, and also a place for your subjects to live. See, a long time ago there was a war among mages that split the world up into these floating islands. This ended badly for those mages, but time past and a new generation of magic-wielding people showed up. Including you. It is your job to weld the islands back together (or at least build bridges between them) and fix what was broken. Admittedly, not a terribly original conceit, but it works well enough.

The importance of each of the islands lies in the resources it has. The player does not know this before connecting the island to their empire and sending a surveyor over there. Once one knows what resources are on an island (for example, iron, stone, gold, wheat, etc.) one can start building the appropriate building(s) to extract them. Different buildings have different placement restrictions, so there is some tactical planning involved to make the most of an island's potential. 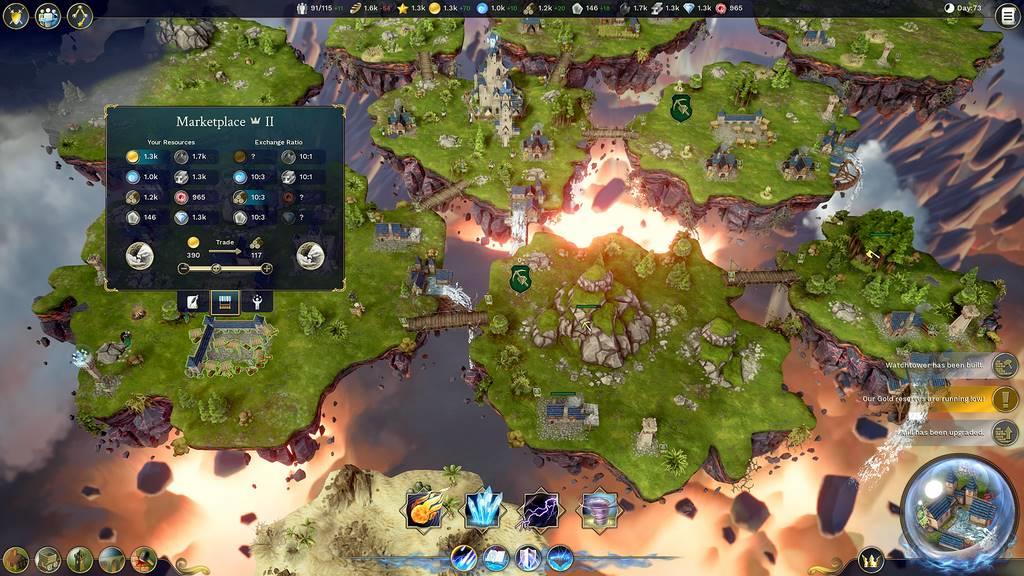 The buildings require people, also, so housing and food need to be provided for them. Farms generate food, while houses give people a place to stay. In an interesting twist, only people without jobs reproduce. This reviewer hesitates to speculate on what the game designers were getting at with this. In any case, this mechanic provides a brake to the usual “build just enough housing to staff all the buildings” strategy these types of games tend to fall into. It is important to balance the need to staff the various buildings with workers with the need to grow population.

Buildings are not only limited to resource gathering and people-storing. There are also combat buildings and miscellaneous. Combat builds allow the player to turn population into units that can inflict damage. For example, a castle allows the player to turn population into fighters, while archery guilds allow one to create archers and wizard guilds recruit, well, wizards. Miscellaneous buildings provide other functionality. Markets are particularly important in that they allow one to trade one type of resource for another (at a given exchange rate)

The buildings can generally be upgraded, where each additional level costs more resources to construct, but allows the building to do more powerful things. In general, it is better to upgrade a building rather than build another of the same type. The upgraded building tends to have additional abilities along with the same benefits as the lower-level version, without taking up any more land or resources. Having fewer, smaller buildings also helps keep a tighter perimeter. 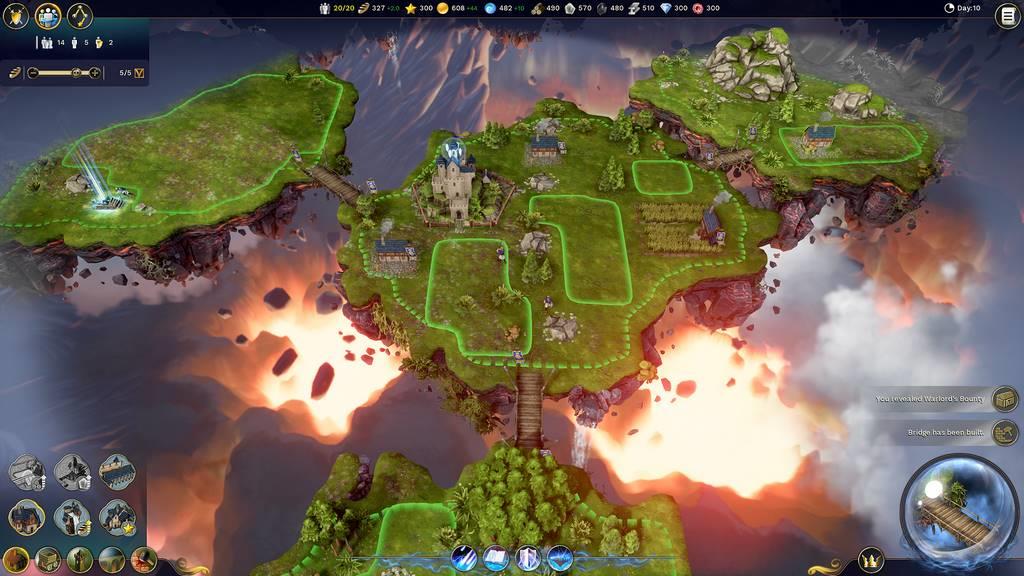 Driftland takes a page out of Majesty's playbook, in that the player does not control units directly. A castle might create fighters, but the fighters are not controlled directly. For example, a wandering monster might decide to snack down on some of your outlying buildings. It is possible that a fighter might decide to go over and fight the monster out of some sense of adventure, or just to ward off the ever-present boredom of being a bunch of pixels in a medieval fantasy kingdom simulator. Or, the fighter might just wander around aimlessly. In order to incent your combat units to attack monsters (or other enemies) you can place a bounty on the monsters (or other enemies). The higher the bounty, the more likely one of your combatants will join the fray. This can lend the whole game a sense of disconnection, as all those fighters/archers/wizards you sent to fighter/archer/wizard university on scholarship now also need to be paid to do any work for you. For people used to ordering around troops this can be unsettling.

Of course, if your troops will not do the work, you can always take the direct approach. The game provides spell that can be cast by the player. Such spells include drawing other islands near, creating new islands, wrecking islands and their buildings, and smiting enemies with damage in the form of fireballs and the like. Islands and buildings generate mana for these spells, so their use is limited, but it can be handy (and satisfying) to be able to strike down a wandering monster when your units can't be bothered, or to create a breach in enemy lines when a battle is otherwise evenly matched.

So what's not to like? Well, the game is still in its early stages – Early Access on Steam – so some growing pains are to be expected. The ability for users to cast spells is not well-balanced, at least with the AI in its current state. It is just too easy to make a beeline for an opponent's main island and crush it with a spell – the AI does not seem to know what to do with this. The ability to dynamically create and join islands sounds like it should add more flexibility to the shape of your empire than it actually does. The idea of being able to create variously-shaped kingdoms from differently-sized islands never comes into play, as the map tends to favor just grabbing all the nearby islands and glomming them together. The game makes it difficult to know what is going on in much detail. One can find out numbers on people and various resources, but the fact that resources run out makes for lots of scenarios when you run out of stone even when you thought you had a bunch of stone mines (or gold, or mana, or lumber, or etc.)

This game in its current state shows a lot of promise. It is fun to play as is, and continued development and playtesting can only improve what limitations it does have.