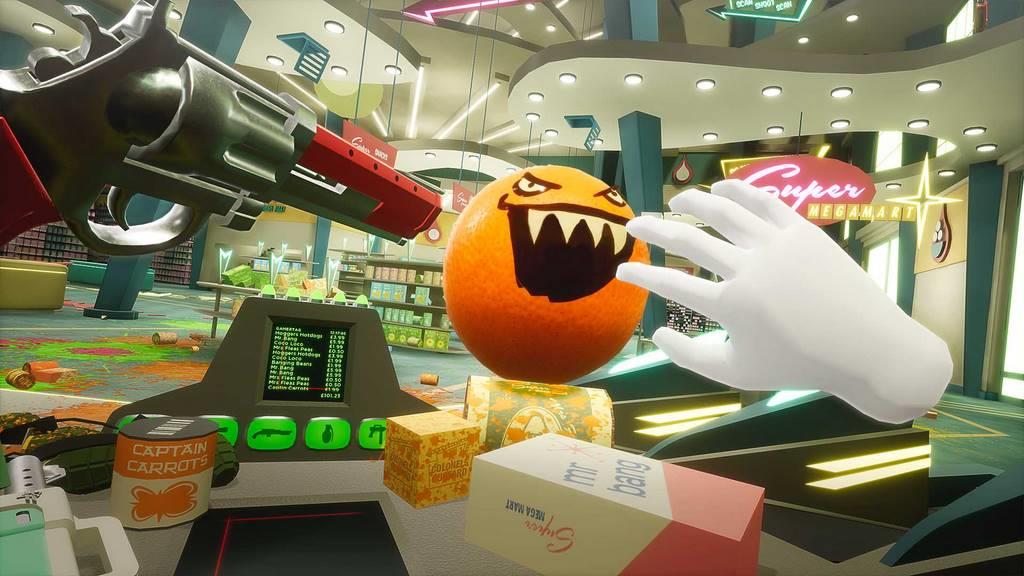 Much like the arcade games that its name invokes, nDreams’ new VR game Shooty Fruity has a deceptive learning curve. The game starts out nice, smooth, and easy, lulling the player into a false sense of security. “Sure,” you think. “I can do this. Shooting fruit is simple and fun. I could shoot these fruit all day.” Then Shooty Fruity pulls the rug out from underneath you. The difficulty ramps almost unperceptively, but before you know it you are duel wielding shotguns, sweating and screaming as you try to take down a renegade pomegranate that is upsetting your flow of groceries. If this were an arcade game, players would be pumping quarter after quarter into the game.

Shooty Fruity’s concept is inspired lunacy. Players start as check-out employees in a grocery store with two tasks. They must scan items coming down a conveyer belt, and they must shoot the fruit. In Shooty-Fruity’s deranged world, fruit are sentient beings, hell-bent on destroying the inner workings of the grocery store. Fruit will drop out of the ventilation shafts on the ceiling to attack the check-out station. Fruit will approach stealthily down the aisles of the store. Fruit will boldly launch itself from all directions in kamikaze attacks, splattering all over the scanner and creating general chaos. Players are supplied with a steady stream of weapons that are used to fend off the relentless fruit attacks, leading to a manic scenario where players are scanning groceries while simultaneously snatching guns off an overhead pully system and blasting away at attacking limes.

Does this sound insane yet? No matter how insane it sounds, I’m not doing it justice. 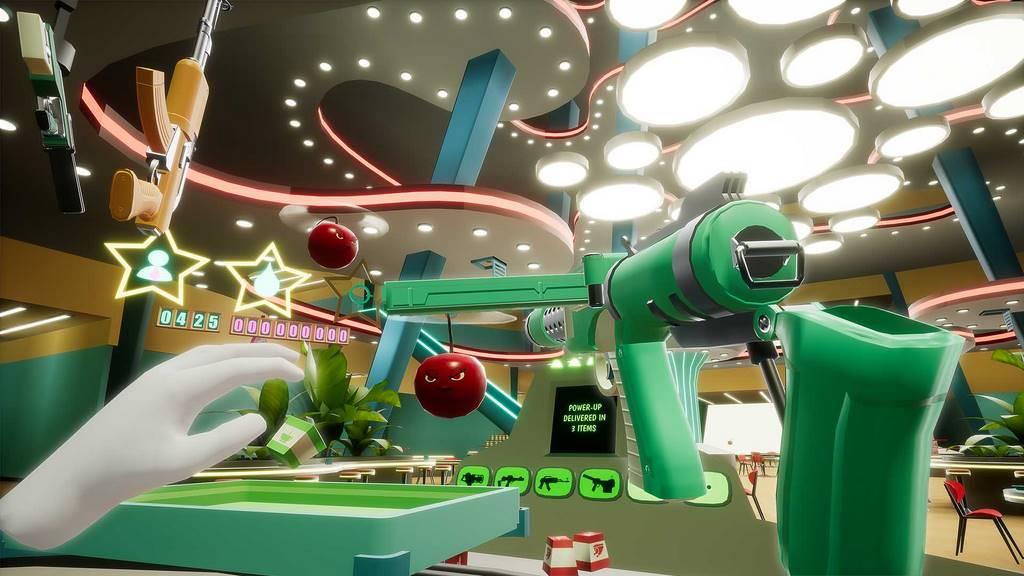 While a quick glance at the Shooty Fruity trailer might give a casual observer the idea that this game is a Job Simulator clone with a bit of shooting on the side, that assumption could not be further from the truth. Instead, Shooty Fruity is a frantic exercise in time and resource management, combined with a ton of shooting that requires real timing and skill. Attempting to play this game casually will work for a little while, but eventually Shooty Fruity tightens the screws to the point that players will either commit to improving their performance, or they will be forced to bail.  Shooty Fruity does not suffer fools.

Players enter the game through the “break room”, which is a small hub area that includes stations for leaderboards, stats, weapons purchases and mission selections. This break room has a lot of information to examine, and taking the time to explore this area often helps clarify any questions players might have about the flow of the game. 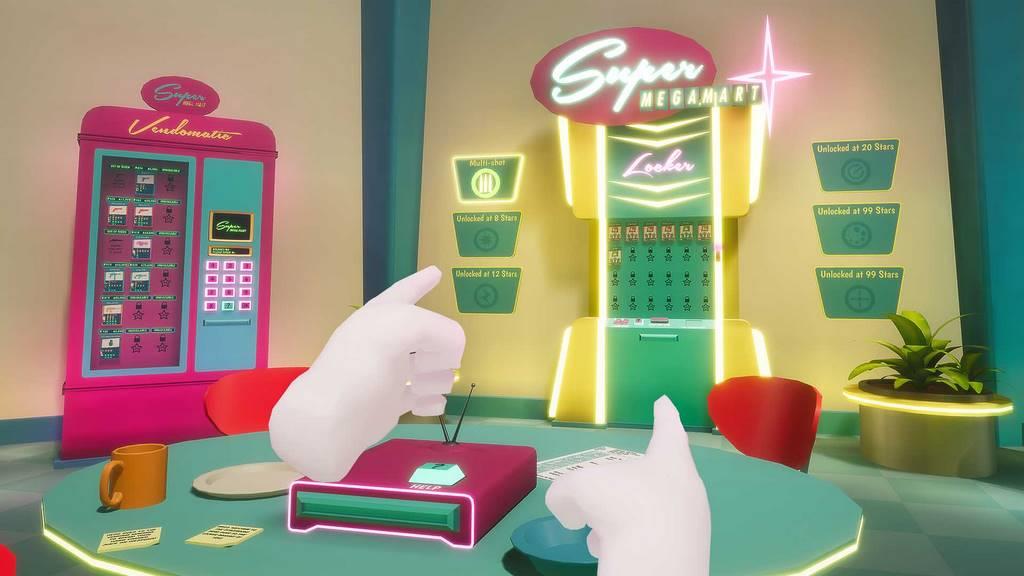 Several systems are in place to give Shooty Fruity a sense of structure. Each mission has three specific objectives that are communicated to the player (kill a certain amount of fruit, scan a certain amount of groceries, etc). Completing these objectives earns the player “stars”, which add up to unlock new missions and weapons. Shooting fruit earns players “juice”, which is the currency the game uses. Long shots and trick shots earn juice multipliers. In between rounds, juice can be used to purchase unlocked weapons. Using more powerful unlocked weapons make finishing mission objectives easier, which then earns players more stars, which then unlock more missions and weapons. As you progress through missions, the objectives become more difficult to achieve, constantly driving the player to up their game, purchase better weapons, and improve their skills. Before long, new “careers” open up, changing the core dynamics and scenery just enough to keep things feeling fresh.

While players can select and test a loadout in the Break Room, at the beginning of each battle players are only supplied with the weakest weapon in their loadout. Only scanning more groceries (or completing other tasks, in other careers) will allow the heavier weapons to appear. This dynamic is important, because it means that you can not just stand there and shoot fruit. Players absolutely must continue scanning items, or the better weapons simply don’t show up. I often found myself snagging extra weapons off of the overhead pully system and stock piling them for later, then frantically trying to scan as many groceries as possible before getting overwhelmed by attacking fruit. When the fruit start appearing in numbers, I would drop the groceries, pick up the weapons, and duel wield the fruit into oblivion, then drop the weapons and go right back to scanning groceries. This balancing act is what makes Shooty Fruity the success that it is. The multitasking aspect quickly becomes hilarious as players are overwhelmed by options, and they suddenly realize that things are going off the rails. 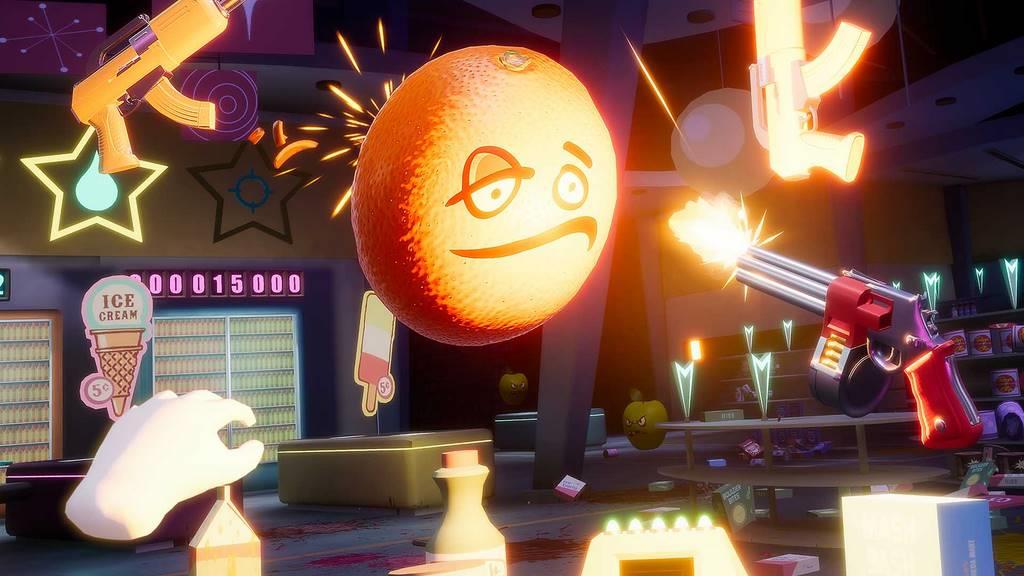 All of this sounds complicated, but Shooty Fruity smartly explains the broad strokes to the player up front, then lets you figure the rest out through experimentation and exploration. Simply looking around offers a wealth of information, much of which is worked organically into the environment. There is a timer counting down the time remaining in each round, posted on the wall right in front of your check out station. I didn’t notice it until one of my kids pointed it out, but it was right there the entire time. The game trusts players to figure things like this out, which makes certain discoveries game-changing revelations.

For as simple as the environments are in Shooty Fruity, the visuals are clean and attractive. The store is clearly rendered, and is appropriately destructible. Shooting signs and goods with a shotgun has the desired effect, which is nice. The fruit themselves are cartoony and lively, and learning the patterns of their movement (and what weapons are effectvei against them) is part of the fun of the game. The environmental sound effects are about what you would expect, with fun muzak in the background contributing to the early-60s-grocery-store vibe. I could have used a bit less of the “stereotypical grocery PA guy” constantly chattering, but there is probably an option to turn him off that I’m just not aware of.

The real stars of the show here are the guns. Shooty Fruity has a wide variety of weaponry to be unlocked, and the guns all have a sense of heft and presence to them. The sound effects department at nDreams clearly worked overtime to get the weapon effects right, with grand success.  Shooting fruit just feels good. 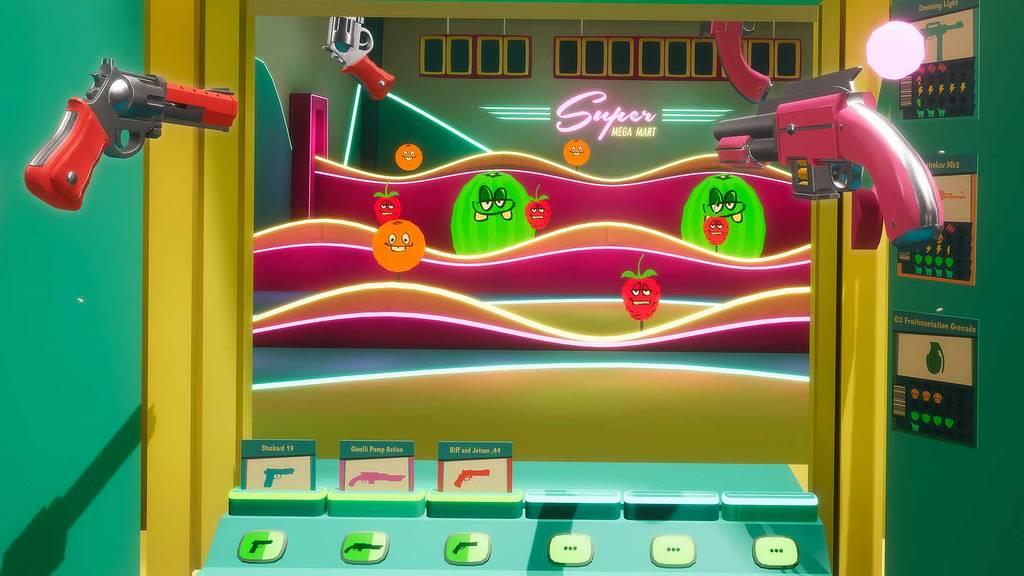 The VR implementation on Shooty Fruity is polished to a deep shine. A solidity is present in every aspect of the game, with very little of the weird glitchy-vibration that sometimes occurs in other VR shooters. It is clear that nDreams experience in developing VR titles is starting to pay off. While I did have some frustrating moments when items I was trying to keep track of fell out of reach, that situation is more indicative of the limitations of the PS VR rather than a problem with the software. Overall, interaction with the many objects and weapons in the game is smooth and trouble free.

I shared Shooty Fruity with my teenaged sons. They are very different gamers with very distinct tastes and dislikes. I often like to filter my opinions and experiences through them, as they offer insights that I might have otherwise overlooked. All of us feel that Shooty Fruity is ridiculously entertaining, taking a simple premise and elevating it through enough variety and polish that it feels new and challenging no matter how many times it takes to win a challenge. When I asked for final opinions today after a weekend of playing, my 15-year-old commented “I would say that it is as good as Pokemon”. In his eyes, NOTHING is as good as Pokemon, so that is a strong, strong endorsement.

In the crowded VR marketplace, Shooty Fruity could be dismissed, getting lost in the current glut of shooters. It would be a shame if gamers overlooked this diamond in the rough, as shooting fruit is somehow more entertaining than shooting most zombies, ghosts and robots. I hope that audiences give Shooty Fruity the chance it deserves.

Shooty Fruity’s silly name belies the truth behind the title. nDreams has provided an experience that should be in the top tier of VR games. An excellent arcade shooter with a wide variety of missions and unlocks, Shooty Fruity elevates a simple concept with quality gunplay, a fun environment, and coat after coat of polish. As many shooters as there are in the VR space, very few are as flat out frantic and entertaining as this.