In appearance, Reigns: HM seems blindingly simple. As is often the case, though, the devil is in the details. The mechanics are almost brutally bare bone: you have a deck of cards. Each card represents a demand or request from one of your subjects. Well, more accurately, they are your husband’s, the King, subjects. You are just the first of what will ultimately be a string of Queens that will easily best the record set by Henry VIII. As it turns out, the Queen’s position is always in peril, and the retirement plan for unwanted Queens is extraordinarily brutal. Let’s just say that there is a reason the 401k retirement plan didn’t come along until centuries later.

Each of these characters with requests/demands will soon become a thorn in your side,or as seen in the previous paragraph, something a lot more painful and a whole lot deadlier. While they may seem to be tiny little inconsequential decisions, such is not the case; as the de facto ruler of the kingdom as the King busies himself with other distractions, there are large segments of society that have strong interests in the decisions you make. That works out well for him - if one of the societal divisions gets too angry at your decisions, you die. And even worse, if any one of the divisions gets too happy, the spite of the other groups drives them into a blind rage that unsurprisingly also ends in your death. The key to royal decrees, it seems, is moderation. The only way to ensure a lengthy royal life is to keep each aspect of the populace equally miserable. This very closely follows my own personal definition of compromise: no one leaves the table happy.

There are four identity groups whose faith in your leadership determine whether or not you will still be drawing breath in the morning are the church, the people, the military, and the bean counters over in Finance. Not every decision you are faced with will be a hot button for every segment of the society, but just about every decision will affect at least one of them. If it was a matter of just not letting any segment get angry enough, it would be a hard job. Also making sure that none of them get too happy makes it a murderously hard job, quite literally. 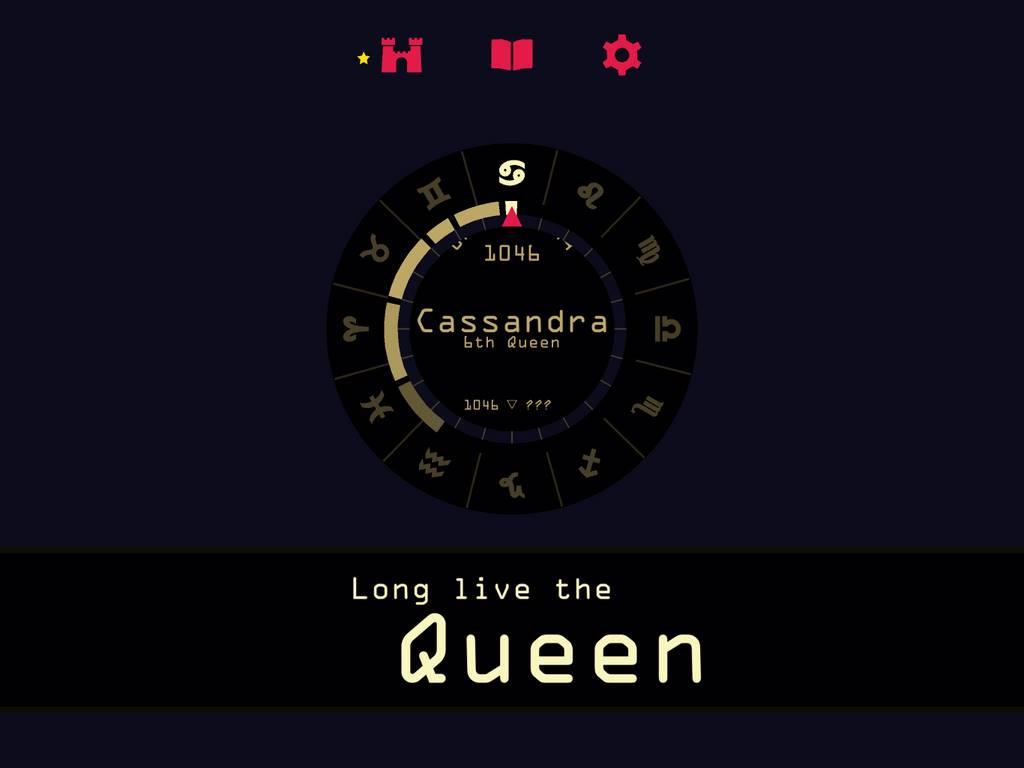 The way this works in action is via a deck of cards. Each card not only contains the name of the requester, but also what it is they want. It could be the Cardinal of the church insisting that the Queen ban drinking in the village, for example. Allowing this would enthuse the Church, but have a starkly deleterious effect on the general population and the military. The Finance guys could not care less, so they can be safely ignored in this case. You get two choices, each displayed on an opposite corner of the card. You pick the left one or the right one, then hold your breath as the changes in public sentiment are reflected on the Happy/Miserable scale for each segment. It sounds easy, but it can be very difficult to decide correctly whether any given segment will be in approval or disapproval of your decision. It helps to some degree that you are given hints as to whether a group cares or not, and whether they care to a great extent or just a little. It is often the case that you must base a decision more on what groups are going to be affected and which are totally agnostic on the issue. Through time you do get a feel for the types of issues each group views positively or negatively, but even after centuries of trying and a couple of dozen dead queens, whose reigns lasted from 4 to 29 years, I still guessed wrong more times than not. Each round with a queen generally only lasts only a few minutes.

In addition to the cards, you have five inventory slots. Mine were eventually filled with a spell book, a pistol, a mirror, a broken clock, and a little chicken bone. I discovered that the way to use an inventory item was to drag it onto the card of a character that could use the item. If I remember correctly, I learned this when I had to engage in a duel. I also learned that it can be dangerous; I got to wondering if the King could fix that clock, so I dropped it on his card. Bad move - that was construed as throwing something at the King, and you should be able to guess what the penalty for that was. ‘Twas sad - she was one of my longer lasting queens right up until I tried that. 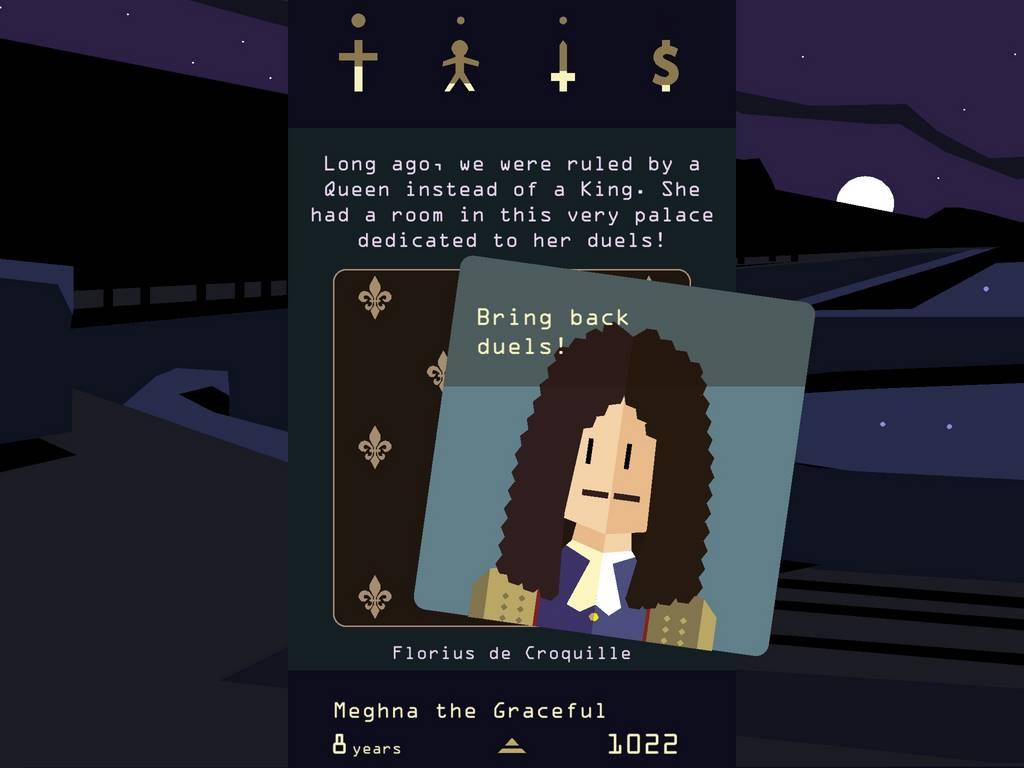 You are also given a set of objectives, although I often seemed to fulfill an objective I had not yet seen on the list. You might have an objective to build a relationship with a neighboring country, for example, but not even be aware of that until you accept an invitation from another country and BAM! - objective complete! I didn’t find that to be bothersome, though, mostly because I never did figure out what good fulfilling the objectives did for me. In  similar vein, I also never found out how to win the game, or even of the game ever ends. It just seems to go on and on with no end in sight, and eventually it became a grind. This does not necessarily indicate that its a bad game with a mortal flaw, as it could be just as easily be a lack of patience on my part for a game that I simply don’t understand. I had hoped to find myself making considered and fair decisions for my people, but what happened instead was the development of a high degree of cynicism as I made decisions with my only guiding light being what I thought would please/anger the right collection of subjects to keep myself alive for another year. For all I know, that’s exactly what happens in any governmental position. It would certainly explain the shenanigans of our Congress. Note that if that statement triggers you, you might also be susceptible to some of the social commentary that infuses the written dialog. While it wasn’t overbearing, it could be bothersome to people that have had enough of the contemporaneous national tantrums that are influencing popular culture.

Me? I just wanted to stop dying from being too popular with the peasants.

Reigns: Her Majesty was an interesting play, although I did eventually lose patience with it. There is very little introductory material so it’s kind of a lean by playing thing, but that’s not really a significant problem as the game is very easy to pick up. It saves as you go and each round can be pretty short, so it’s a very good game for quick sessions. Given its shape, form, and interface, it would make a good iOS or Android game too(editors note: it is) . It is currently priced at a very generous $2.99 on Steam, so it’s also far less risky to try than it is to be the queen.

Reign: Her Majesty is a simple game mechanically, but don't let that fool you. Your decisions are not always easy, and the consequences for bad decisions are often fatal. Tread lightly, My Queen, tread lightly indeed!