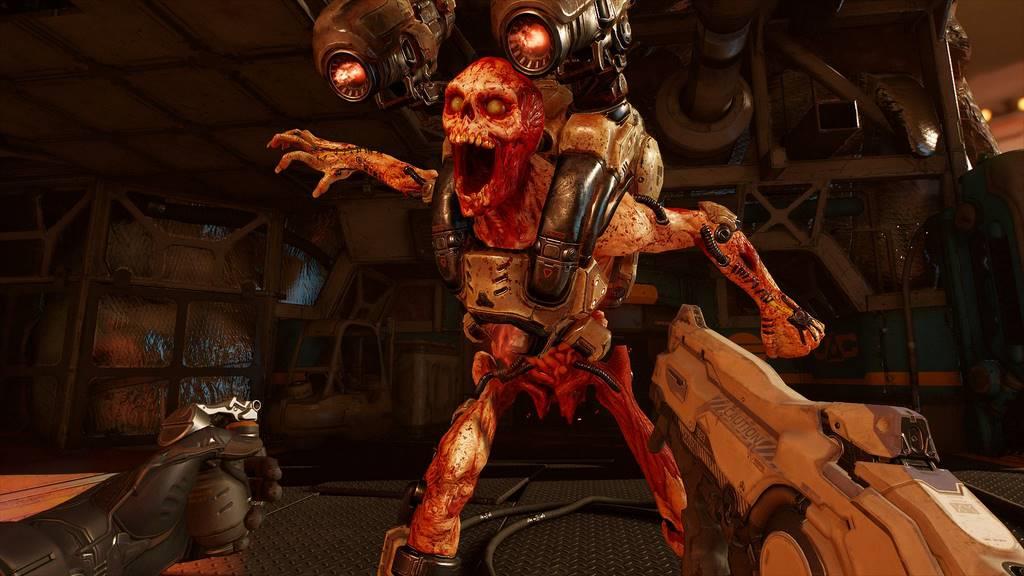 The graphics are amazing and the sense of atmosphere is pervasive. The pacing is spot on, with intense action moments that ease occasionally to give the player a chance to breathe. The battles are tough and engaging without ever seeming unfair. Doom VFR manages to be both creepy and funny at the same time, with a short campaign holding the experience together and lots of silly secrets to discover.

That all sounds great, right? So, what is holding Doom VFR back from being the best game ever on PS VR? An absolutely baffling control scheme on the Move controllers, that’s what.

Picture this scenario: You are in a hallway, and enemies are approaching from the east and west. You are facing north, so you are looking at a wall.  To shoot enemies, you have to either physically turn your body to aim towards them, or click a ‘turn’ button so you can engage them head on. Turning your body is not really a wise option, as this is VR, and getting tangled in wires is never a good plan.  So, you click the ‘turn’ button. Suddenly, you are facing south, looking at the opposite wall. The enemies are still approaching from the east and west. You click the ‘turn’ button again. You are now facing north again, looking at the original wall. The demons are closing in. In a panic, you decide to warp out of your current position. You point the Move controller down the hallway to the east and click the warp button. You smoothly warp into your selected position behind the demons, and find yourself staring at the wall. You click the turn button, and find yourself looking the opposite wall.

Then you throw your controllers down in disgust, because the rest of this game is AWESOME, and you just want someone to take the handcuffs off you, so you can play the thing. 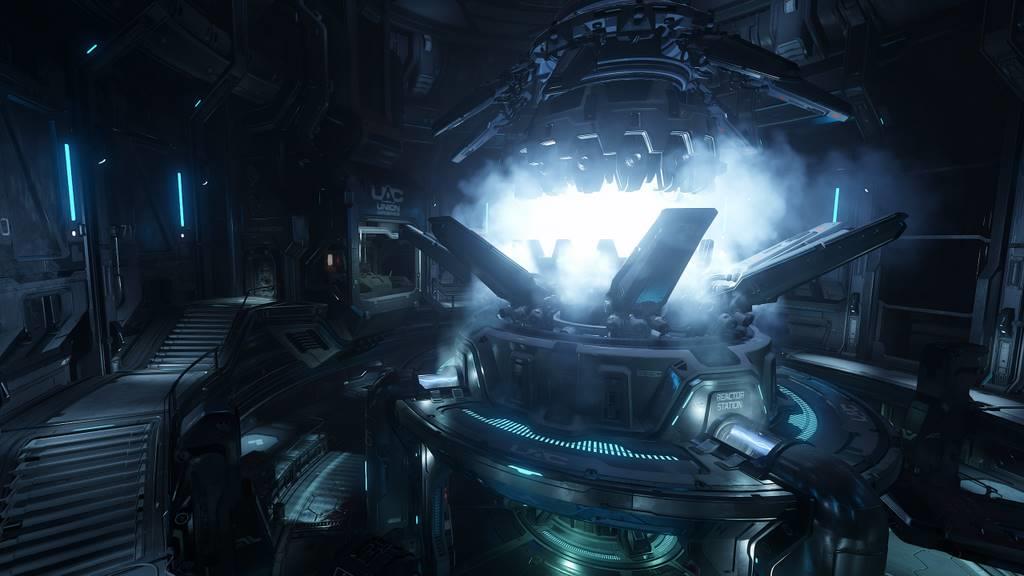 I cannot - for the life of me - understand what decision-making process led to this control scheme. The warp mechanic works fine – great, in fact – but if I can’t turn and see what I need to see, there is no point. Turning 180 degrees in unfamiliar environments is incredibly disorienting, requiring the player to do some mental gymnastics every time to determine where they were heading. When the demons are closing in in a game as fast paced as this one, this dynamic is undeniably game-breaking.

The left face buttons all control dash movements, allowing the player to quickly move out of harm’s way when they don’t want to warp to a new location. However, these dash movements are mapped in an incredibly unintuitive configuration, which again leads to too much thinking and not enough moving. The result? I never used the dash buttons at all. They might as well have not been there (which would have freed up four more buttons for turning). 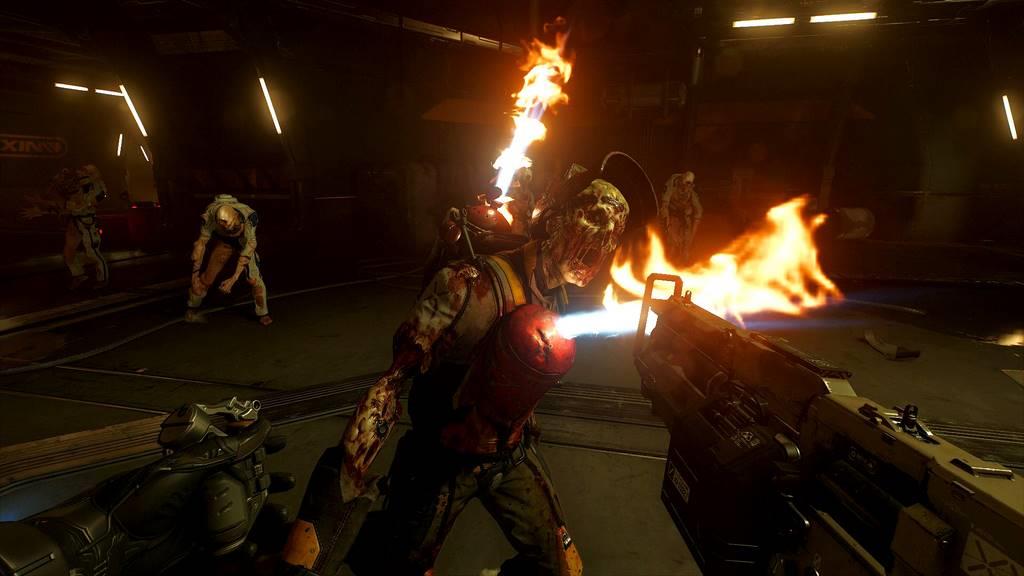 I do not own a PlayStation AIM controller, so after some time, I switched to the Duel Shock 4 in desperation. And suddenly, all my frustration fell away, and Doom VFR totally clicked. You see, the Duel Shock configuration allows the player to turn incrementally. Suddenly, I could warp away from enemies to the other side of a chamber, and then wheel around to face them without completely getting lost in the environment. I quickly figured out how to use the weapon wheel, and the dash buttons are mapped to the d-pad, which makes total sense. The warping (which I am actually a fan of) works just as well as it does with the Move controllers. After a brief period of adjustment, I was wiping the floor with enemies so easily that I backed out of my playthrough and started over on a more difficult setting. I began settling into the game and enjoying myself.

But what was lost in the transition to Duel Shock? The ability to duel wield effectively. The Duel Shock controller configuration ties your aim to your field of vision. You aim by looking at enemies, as opposed to aiming with your arms, you know, like you would in a VR title. Fairly early in the story, you get a grenade launcher, and with the Move controllers you can shoot with your right hand while effectively shooting grenades in a different direction with your left (don’t get me started on the fact that I’m left handed, which is a separate issue). With the Duel Shock, both grenades and bullets fly in the direction the player is looking. It’s fine, it works, but it isn’t optimal. You see, I want to aim at enemies by pointing at them, not by looking at them. It’s a nagging point that bothered me throughout my second playthrough. I was enjoying Doom VFR, but was mildly annoyed that I couldn’t enjoy it the way I wanted. 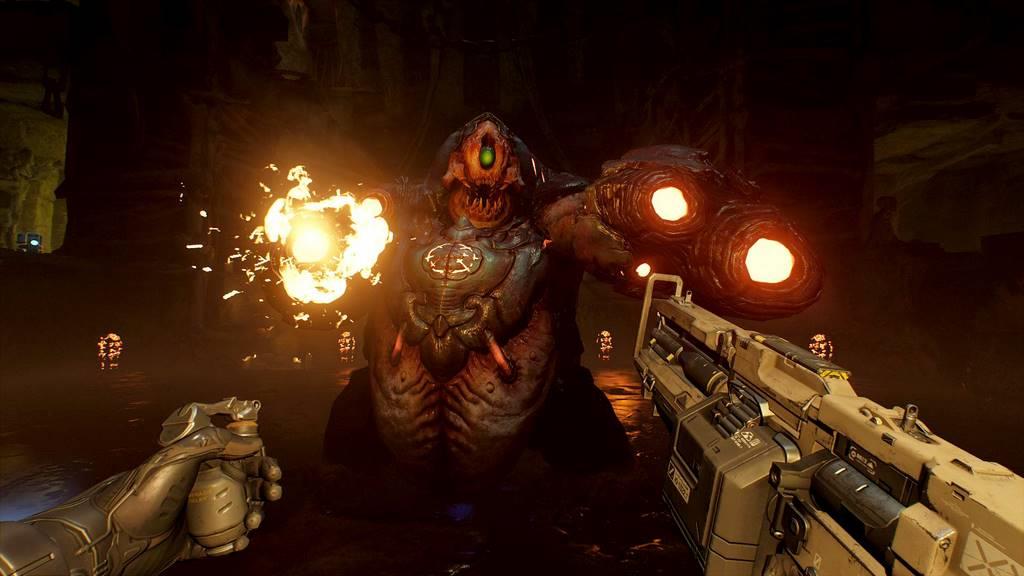 But, now that I have hammered on the control scheme sufficiently, I’m going to go ahead and recommend Doom VFR anyhow. Because outside of the crazy control decisions, Doom VFR is an incredible experience. Let’s be real, id and Bethesda might end up patching the controller configuration if other players are having as much trouble as I am, and as unhappy as the controller issues made me, the rest of Doom VFR absolutely delighted me.

I have not touched a Doom title since the original release in 1993. If I had known what I was missing, I would have reengaged with the franchise long ago. Once I figured out a suitable way to play the game, I really loved experiencing Doom VFR.

The campaign is extremely entertaining, and is split into levels that each contain a mixture of exploration, mild puzzle solving, and intense battle. Each level has its own subset of secrets to discover and challenges to overcome. While some of this secret content might be old news for players of last year’s traditional release, it was news to me as a franchise outsider, and I enjoyed scouring the levels for secrets. Moments when I thought “Oh, can I get over there?” were usually answered with a resounding “Yes!” with a secret thrown in to boot.

While the story left me a bit lost, I didn’t mind too much. My objectives were usually clear, and the few times I got turned around were easily resolved by backtracking until I could get my bearings. Weapons and upgrades are revealed to the player at a breakneck pace, and before I knew it I had the entire weapon wheel unlocked, with most of it upgraded. The gunplay is quick and satisfying, and I enjoyed trying different weapon strategies on the various enemies. 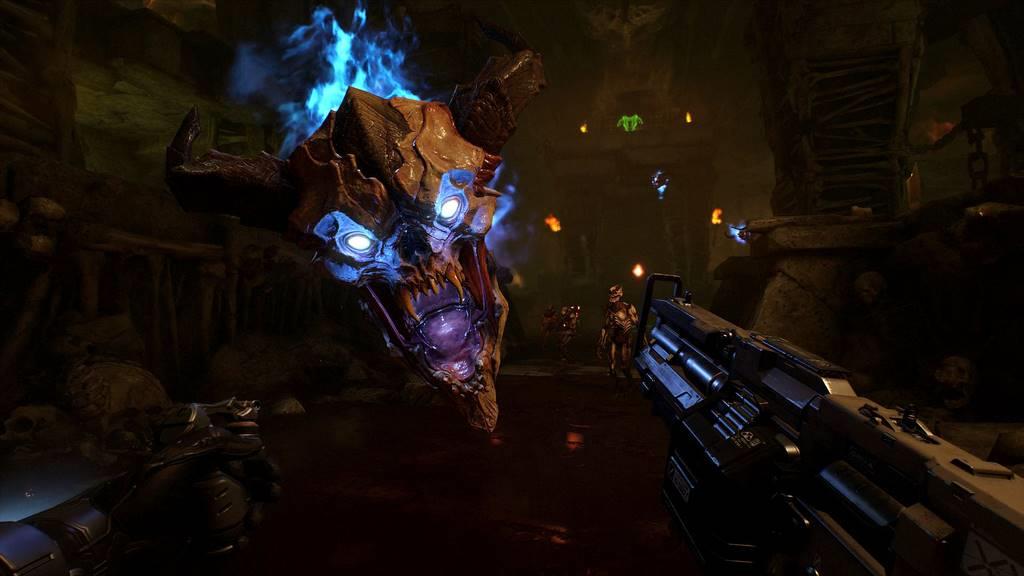 Battles are played out in a variety of settings, which lends a nice, unique feel to each set piece. I don’t want to give too much away to players that haven’t played last year’s traditional release, but some of the later levels are deeply atmospheric and pretty creepy. What is easily shrugged off on a TV screen is a lot more visceral when it is screaming in your face.

I am a strong supporter of teleporting in VR games. Properly implemented, I feel that it is a viable alternative to nauseating free movement, and with the right sound effects and special effects, teleporting can be satisfying in its own unique way. Doom VFR offers one of the best teleporting dynamics I’ve seen. When an enemy is staggered they start glowing a bit, signaling to players that they can teleport directly into that staggered enemy. Doing so causes the enemy to explode into geyser of blood, and typically drops a few bonus health points or ammo clips. Combined with the slow-motion effect that triggers when you are prepping to teleport, you can use this combo to chain from enemy to enemy, leaving a path of bloody gore in your wake. Level design contains a lot of verticality, and having multiple planes to retreat to becomes crucial when you are surrounded by enemies. The ability to suddenly warp two levels above the fray and rain hot lead down on them from above is just wonderful. I found myself cackling with delight more than once when the enemy was bearing down on me and I suddenly materialized behind them and blasted them with a shotgun to the head.

I would be remiss if I did not mention the bonus levels from the original Doom that are included with Doom VFR. Honestly, I’m not sure what I did to unlock them, but they were sitting there when I finished my playthrough of the campaign. It was an absolute blast to play through these classic levels, which combine the old school look and layout of the original title with enemies from the current release. The inclusion of the bonus levels was very welcome, and as I was not expecting them, a nice surprise.

It is almost causing me physical pain not to be giving Doom VFR a better score. It is clear that a lot of care and love went into making this game. Doom VFR does not feel like it was cobbled together from preexisting assets. Rather, it feels like it was designed for VR from the ground up. The amount of content players receive is generous for the lower price point that this game is being offered for. Once I settled down and stopped straining against what I thought the controls should feel like, I had a great time. But the fact that I strained at all shows that this project went a bit off the rails at some point. Bethesda has shown with Skyrim VR that they can make a good and intuitive control scheme for a VR game that is far more complex than Doom. I can’t imagine what led to the decision to restrict the player with a 180 degree turn when playing with the Move controllers, but that decision almost sinks an otherwise remarkable experience.

Doom VFR is a remarkable experience in almost every way. There are intense battles, terrifying enemies, and amazing settings to explore, all tied together with a combination of creepiness and wit. All of this is almost upended by one of the worst control schemes ever implemented on the (admittedly difficult) PlayStation Move controllers. Doom VFR is still well worth playing (in fact, it’s a blast), just go into the experience with the understanding that no matter which controller you decide to use, you won’t be 100% satisfied.