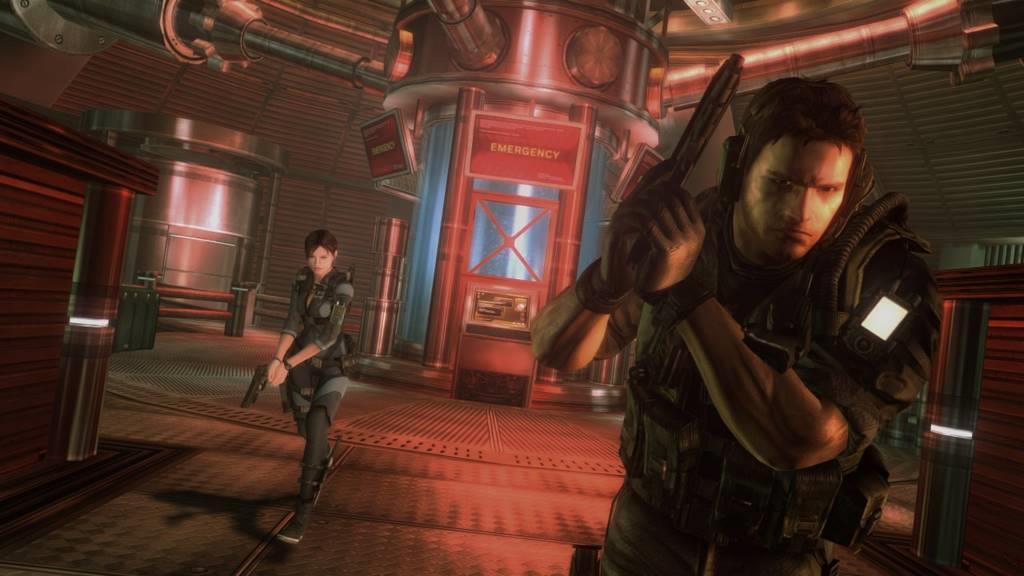 Before Resident Evil 7 returned the storied but troubled franchise to its survival horror roots, the faint beacon of hope for the series was Resident Evil Revelations. A spinoff originally released for the 3DS early in its lifecycle, Revelations was a return to the spooky, tense atmosphere and adrenaline-laced action that characterized Resident Evil 4, as opposed to the bonkers stunts and breakneck pace of Resident Evil 5 and 6. It was a breath of fresh air—restrained, focused and yet robust and especially impressive for a handheld title. Revelations eventually saw an HD re-release on PS3, Xbox 360, Wii U and PC and even a home console sequel. Five years later Revelations has come full circle and landed on Switch, another Nintendo portable, with the sequel along for the ride.

The first game in the collection, the original Resident Evil Revelations, takes place between Resident Evil 4 and 5. Series mainstay Chris Redfield and his new partner Jessica Sherawat have gone missing, so it’s up to his old partner Jill Valentine and her teammate Parker Luciani to go looking for them. Both teams were investigating the aftermath of a catastrophic bioterror attack on a floating solar city, and the hunt for clues eventually leads both teams to a derelict, bioweapon-infested ocean liner called the Queen Zenobia. You play as Jill for the majority of the game but will occasionally switch to Chris and Jessica, and even flashback to the events of the disaster and play as Parker a couple times. The game is broken up into brief chapters with a quick, “last time on” recap between levels.

I reviewed the Wii U port of Revelations a few years back and for the most part, my opinion on the game stands. It’s a solid, well-constructed experience with some fantastic atmosphere, an inspired setting for a survival horror game, and gameplay that worked great on the 3DS but hasn’t aged particularly well. Revelations was originally constrained by the 3DS’s single analog circle pad, so while it retains Resident Evil 4’s superb over-the-shoulder viewpoint, the lack of fine aiming control really hobbles the overall experience. Without the ability to quickly pinpoint enemy body parts and weak spots (unless you used the 3DS’s gyro aiming), you’re essentially reduced to pumping bullets into the game’s twitchy ooze monsters until they dissolve. This makes conserving ammo even more of a chore than it usually is, since you can’t stun enemies with a well-placed shot and then finish them off with a knife the way Leon could in Resident Evil 4.

Revelations has a few other gameplay limitations that betray its age. The “genesis” bioweapon scanner, which Jill makes a big deal about in the first mission, lets you scan for items but also build up a persistent score by scanning enemies, dead or undead. Filling the scanner to 100% merely gifts you an extra health herb, instead of revealing useful weaknesses or strategies for the enemies you are scanning, and it’s annoying that you have to scan an entire room for items before you can pick them up. Why aren’t health and ammo just lying in plain sight like in previous Resident Evil games? I have a feeling that “hiding” powerups until you scanned them was a way to save precious memory on the 3DS, but on Switch it feels painfully redundant. 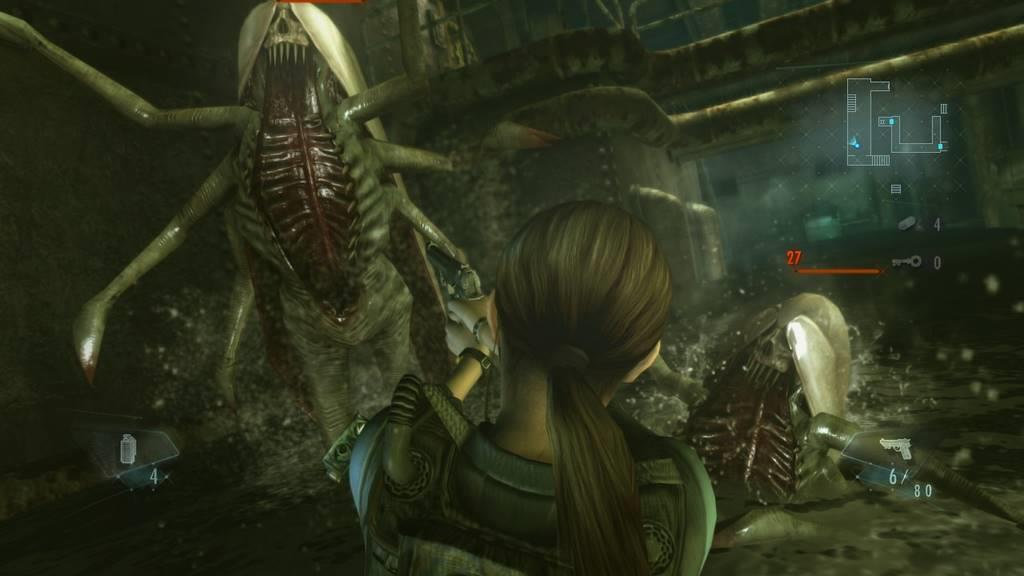 The game’s partner AI is also pretty hit-and-miss. In one level Chris falls down a chasm, sprains his ankle and is surrounded by zombie wolves, so Jessica provides sniper support; this was a cool sequence, but clearly scripted. In the subsequent level, Jill and Parker escape imprisonment and must find their equipment. So basically you’re running around as a completely weaponless Jill while Parker tags along being useless. At one point a monster was chewing poor Jill’s face off while burly Parker, who looks like he could rip a tree trunk in half, just stood by dumbly. Revelations was damn impressive on 3DS but its gameplay conventions—not to mention its graphics—are really starting to show their age. It’s worth revisiting on Switch, but the real star of this collection is the sequel.

Resident Evil Revelations 2 has the advantage of a more direct, traditional plot structure and the tighter gameplay afforded by home console development. Originally released episodically in 2015, you wouldn’t know it playing the complete game on Switch. The story is a lot more straightforward than the original Revelations, with only two plotlines separated by about six months. Raccoon City veteran Claire Redfield and her new coworker Moira Burton are abducted during a company function, and awake in an abandoned prison. They battle their way through a myriad of infected asylum inmates to reach a radio tower and send a distress call, all the while tormented by a mysterious woman known as “the overseer.”

Moira’s dad (and original Resident Evil hero) Barry Burton receives the distress call six months later, and arrives on the island where his daughter was taken. He meets an enigmatic little girl named Natalia who claims Moira is dead. Undeterred, Barry takes Natalia with him to learn what happened to Claire and Moira, and discover just who this overseer is. The prison island might not be as evocative a setting as the Queen Zenobia, but I think it’s ultimately more effective. It gets the plot moving quickly without the backstory baggage that slowed the original game down, and a creepy asylum, though cliché, just lends itself better to being a haunted zombie house. 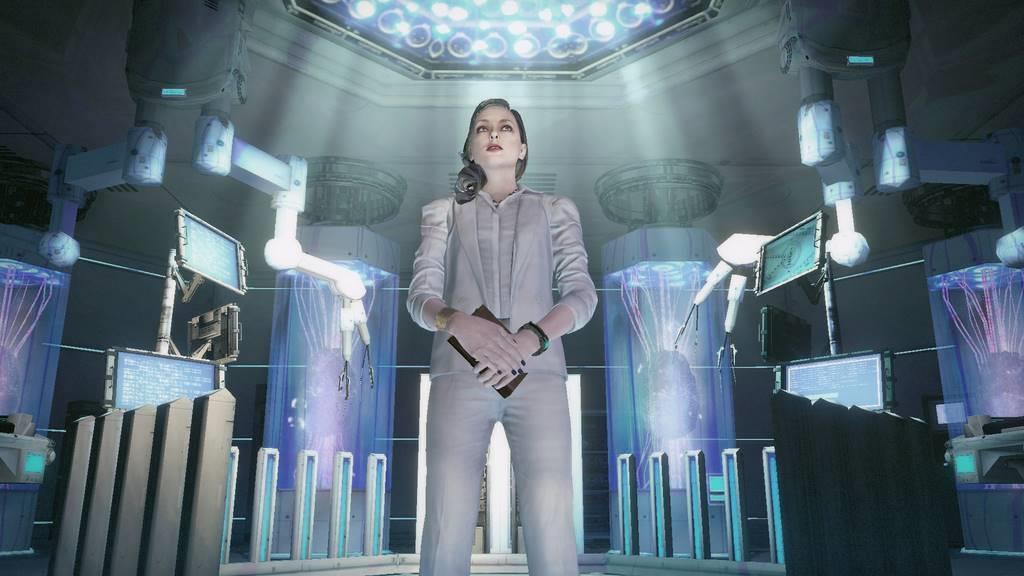 Revelations 2 also has much tighter gameplay than its predecessor. A dedicated dodge button combo makes it much easier to avoid enemy attacks, which is a lifesaver when you don’t have enough time to line up a shot. Precision aiming is back too; blasting pustules on an inmate’s head not only instantly dispatches him, but affects Barry’s campaign in a way that is reminiscent of the crimson heads in the remake of the first Resident Evil game. The two-character system works a lot better in Revelations 2, allowing you to swap at will to solve puzzles. Moira is surprisingly fun to play—she has a gun phobia, but has no compunctions about bludgeoning a zombie to death with her crowbar. This sets her gameplay style apart from Claire, who is a firearms expert, and Moira’s flashlight is much quicker at revealing hidden items than the clunky genesis scanner ever was.

Revelations 2 is still a touch cludgy at times. Its difficulty progression varies wildly—some parts are an insulting breeze, while other sequences had me running out of ammo and dying repeatedly. On that note, its checkpoint system could use an overhaul. I had to replay a section several times over because the game only saves at predetermined points. I know their inclusion strains credibility, but I really miss those old typewriters; I don’t mind backtracking a bit if it lets me save at will. That said, Revelations 2 is a much better game than the original and definitely worth a replay on Switch. It doesn’t have the variety, length or peerless pacing and difficulty balance of Resident Evil 4, but it comes reasonably close. 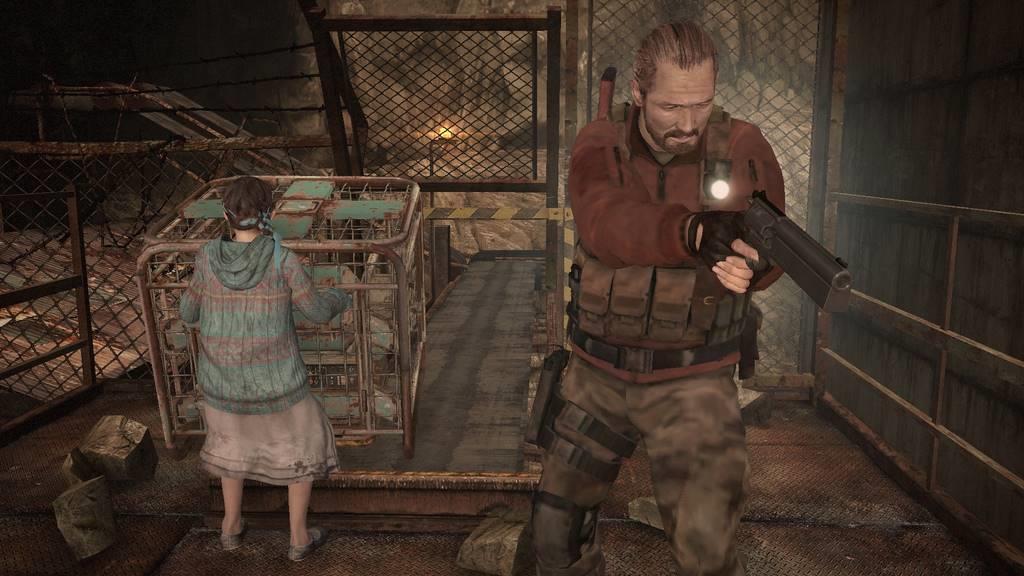 An added bonus for both games on Switch is HD rumble and motion controls. The HD rumble isn’t as pronounced as Mario Kart or Mario Odyssey, but it’s definitely there and I’m glad that even third parties are taking advantage of this cool little feature on Switch. The motion controls are an excellent addition. Gyro aiming with the Joy-Cons (or even the Pro Controller) make precision shots a breeze and recall the pitch-perfect aiming in Resident Evil 4 for Wii. Motion aiming takes the clunkiness out of Resident Evil and makes the experience all the more enjoyable.

At $40 for the collection, or $20 individually, Revelations 1 and 2 are certainly worth a revisit on Switch, and if you’ve never played either then they are a worthwhile addition to your Switch library by virtue of being pretty good survival horror games from yesteryear. Just make sure you have an SD card for your Switch; Revelations 2 isn’t included on the cartridge and is download only, and a whopping 23GB at that.

I must admit though, playing through these titles, especially with the motion aiming, just made me yearn for a Switch port of Resident Evil 4. It’s been ported to pretty much everything else so I wouldn’t be surprised if it showed up eventually. Until that hypothetical day, the Resident Evil Revelations Collection is more than enough survival horror to satisfy Switch owners looking for a tense scare.

Resident Evil Revelations Collection bundles two of the better entries in the long-running survival horror series. The first game is hit-or-miss but the sequel is legitimately great, and the added portability and motion controls make the Switch port the definitive versions of these two games.