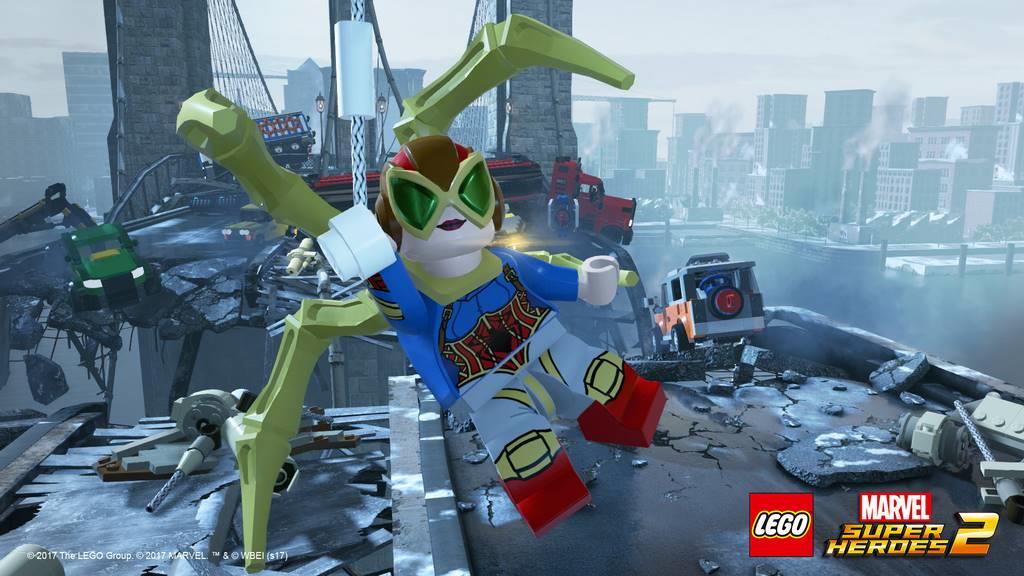 I’ve played most of the LEGO hits over the years and I can tell you two things. One, there are easy puzzles galore, and two, there are horrible one-liners that keep things lighthearted throughout. But it isn’t just that they do these things, it is the way that it is executed that matters.

Puzzles and puzzles galore. There is no need to fret, the tried-and-true way that LEGO Marvel Superheroes 2 (LMS2 from here on) makes the game go is by using the “smash stuff, build stuff” techniques that we’ve all come to enjoy. See a metal box—smash it. See a table—smash it. Ooooh, now we have a wheel mechanism. There is nothing new to see here, but that’s also a good thing.

The problem with this fun little game is in the execution of the puzzles. I had a lot of little scenarios where the answer was not obvious and I ended up stranded until I had to look on the internet for help. Now, myself being confused in puzzle games notwithstanding, my problem isn’t with the idea that I was stumped—it would be the five- or six-year-old in the same scenario. Don’t get me wrong, there are helpers when you step here and there to tell you what to do, but not all the time and some of them are very vague.

An example of the worst one I had was a battle with Kraven. [WARNING: SPOILERS.] He disappears and you are to fight a lion who runs back and forth on the screen. I didn’t notice I had the correct superhero to cut the vines in the rear, so I spent some 25 minutes trying various ways to kill the lion. Use tag-team; attack from the rear; use the spikes that shoot up; use powered-up attacks. In the end, all it took was a cutting of the vines blocking a button that exposes a beef leg for the lion. This is probably very obvious to some gamers, but not necessarily for everyone, and surely not for a five-year-old. I found a few of these problems to be more annoying that the usual LEGO game and I think it doesn’t help keep a child happy if they have to ask every 10 minutes what to do. To me, there should be a time limit to not giving help—then a message with bigger help.

LMS2 is still a very enjoyable game with a lot to offer. There is a fun, if confusing at times, story where Kang is trying to take over the world and it works right into the hero-fest at your command. This is easily the most “Marvel” LEGO game (and potentially any game) produced to date. There are all the typical movie-goer favorites: Iron Man, Thor, Star Lord, Groot, and Captain America. And then there is a whole bunch from the comic book side of Marvel: Carnage, Crimson Dynamo, Red Hulk, Ghost Rider, She Hulk, and dozens more. 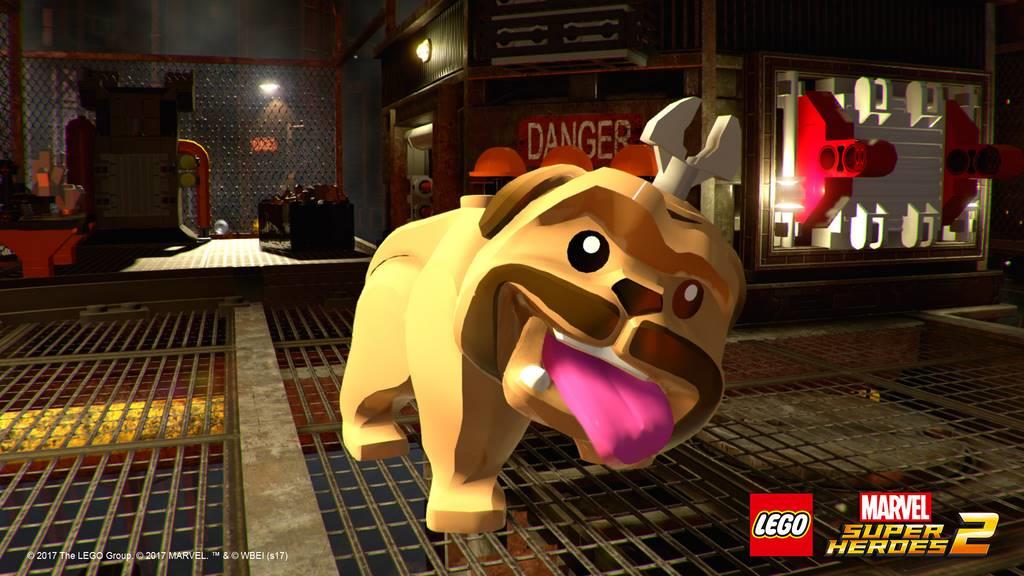 There is also the ability to create your own superhero. This new feature is very deep and your customized hero could be very unique indeed. Everything from face, color, style, clothes, mouth, etc., is up to you. There are quite a few options that need unlocked, but even the basic list returns you a cool-looking fighter.

Like other LEGO games, LMS2 lets you collect characters and then go back and get collectible stuff from areas where you didn’t have that hero yet. It is a horrible amount of back-track and remembering to be entertaining to me, but the same players that shoot every pigeon in Grand Theft Auto 5 will most likely get every secret nugget from this game (though hopefully played at different ages).

LMS2 also makes for a pretty good get-together for friends. Adding a companion makes for a fun romp through the campaign and gives some perspective on different puzzles that one player would have trouble with. The co-op thing falls flat as the multiplayer mode is lousy and uninspired. These local-only games are lackluster and they don’t have bigger oomph than the single-player version. The collect-the-infinity-stones game I played was not only boring as heck, but the map we were on allowed players to get stuck in low parts of the map. There was a time I couldn’t move for the entire time the stone was in someone else’s possession—making me lose the lead badly. The same thing happened to all three enemies and I was allowed to take a huge lead. In the end, this part of the game is very underdeveloped, but LEGO games have never been known for their multiplayer prowess. 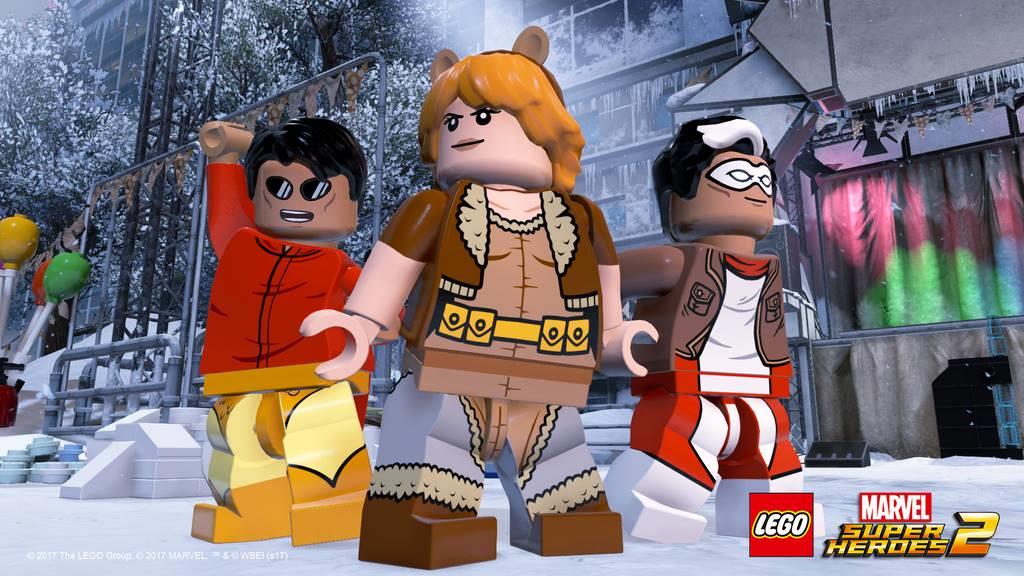 Other problems with the game are the standard LEGO game problems of old. The fighting is very lackluster for the most part, especially for a collection of superheroes, and the cookie-cutter thugs in every level get dull after an hour of gameplay. The way the game has players use the thrown, whipped, and targeted attacks are a bit hokey as well. It made it very difficult to do a multiple attack on enemies since a lot of them had guns of one type or another. The attacks from the heroes with “punches” as their attack are also lackluster. I found myself using the “cooler” attack much more often that using who I wanted to use. The standard die-respawn-collect-coins aspect is back as well, making the game hopelessly easy, but providing no challenge to anyone over four.

In the end, however, this game utilizes the LEGO schematic very well and provides hours of campaign entertainment. There are a slew of characters and secrets to get and the one-liners are decent. Returning LEGO players will definitely not be surprised with anything in this game and, for the most part, new players won’t be shocked and awed to any degree. I think there is a bit too much in the way of puzzle challenges considering the age this game caters to, but there is just enough there to keep the game moving.

LEGO Marvel Super Heroes 2 is a tried-and-true game for young kids everywhere who like the Marvel universe. There is a bit too much frustration with some parts of the game and the fighting can be very ho-hum for anyone out of diapers. That said, the humor, collection of heroes, length of the game, and overall quality makes this a no-brainer for kids everywhere. Just be ready to help 'em out.