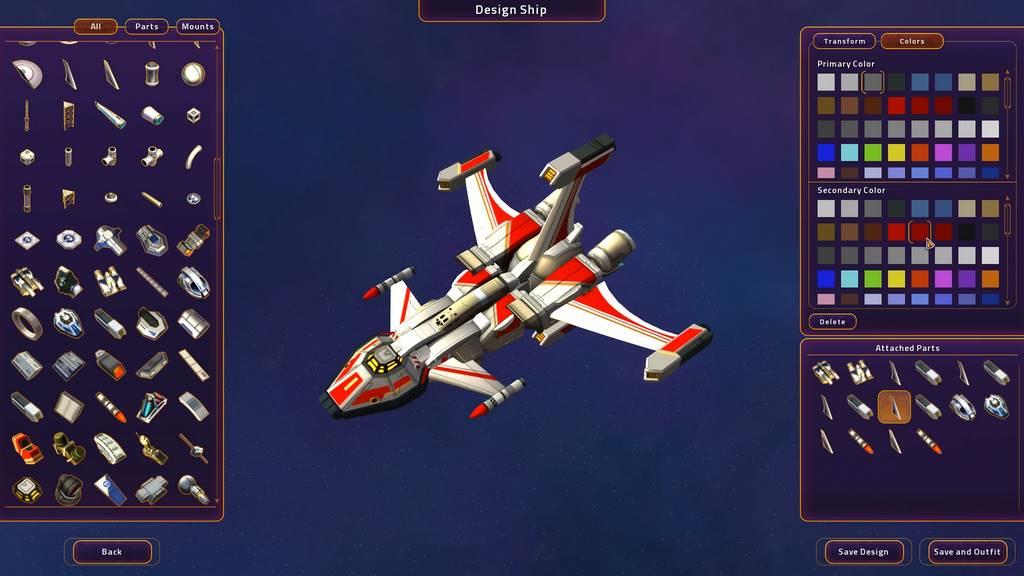 The Star Control series has a long and storied history. The original Star Control was published back in the early days of the 1990s, an era when the PC was just starting to attract game developers and the venerable Commodore 64 was fading into gaming history. There wasn’t much to it by the standards of today—no in-depth story to be told, no planetary systems to be explored, no economics or commerce to support trade routes, nothing but ship-to-ship combat. Well, more accurately, it was fleet-to-fleet combat, albeit one ship at a time. Fleets were comprised of seven ships, each with unique weaponry and other capabilities. Battles tended to be close-up affairs with the two players orbiting around each other like reluctant boxers in a ring, firing weapons at each other until the opponent’s ship was depleted of crew.

There were at least two sequels to Star Control, imaginatively named Star Control 2 and Star Control 3. Version 2 was also published by Accolade, and it went far beyond the battle scenarios provided in the original. With the addition of a story-driven exploration/adventure game that included diplomacy and resource gathering, players had a great deal more to concentrate on than just the melee battles of the first version. It also had a two-player mode that concentrated solely on the combat aspects. With Star Control 3, Accolade outsourced the development of the game and distanced themselves from the original dev team. This resulted in a game that had to tiptoe around the canonical lore of the first two iterations. Even so, it was popular. After the 1996 release of Star Control 3, there was an abortive effort to bring out Star Control 4, but it never seemed to get off the ground. So to speak.

That brings us to today. Stardock Entertainment bought the IP and publishing rights for the original Star Control trilogy from Atari a few years ago and has begun a complete reimagining of the Star Control franchise. I say “reimagining” because Stardock has distinctly stated that they do not intend to just rebuild the existing Star Control world. There is a reason for this reticence on the subject of using the existing lore: while they were able to purchase a license to use the aliens and lore of the initial versions, they do not own the rights to those properties. Any changes they make would potentially cause rifts in any future timelines. There is another reason, too: the story is 25 years old, and new players are not typically going to be well versed in it. The upshot of all of this is that Origins will tell a story of a new race inhabiting the same multiverse as the original Star Control games.

The ultimate goal with Origins is to “bring back the open universe space adventure/exploration genre.” That’s a tall order, and it is not exactly a unique goal. Elite Dangerous comes to mind, as does Star Citizen, as games attempting the same feat. The strength of Origins, however, is that it already has a healthy and vibrant world based on the lore from the previous games, and there are plans to provide in-game crafting features to allow players to create and share new universes having their own unique ships, aliens, and histories.

All of that is in the future, though. Seemingly adopting the “one piece at a time” development model of Star Citizen, up to and including what to build and release first, Stardock has entered open beta with Star Control Origins: Fleet Battles, which is basically Star Citizen’s Hangar Module (design and build your fleet) and Arena Commander (ship-to-ship combat) combined into a single release. 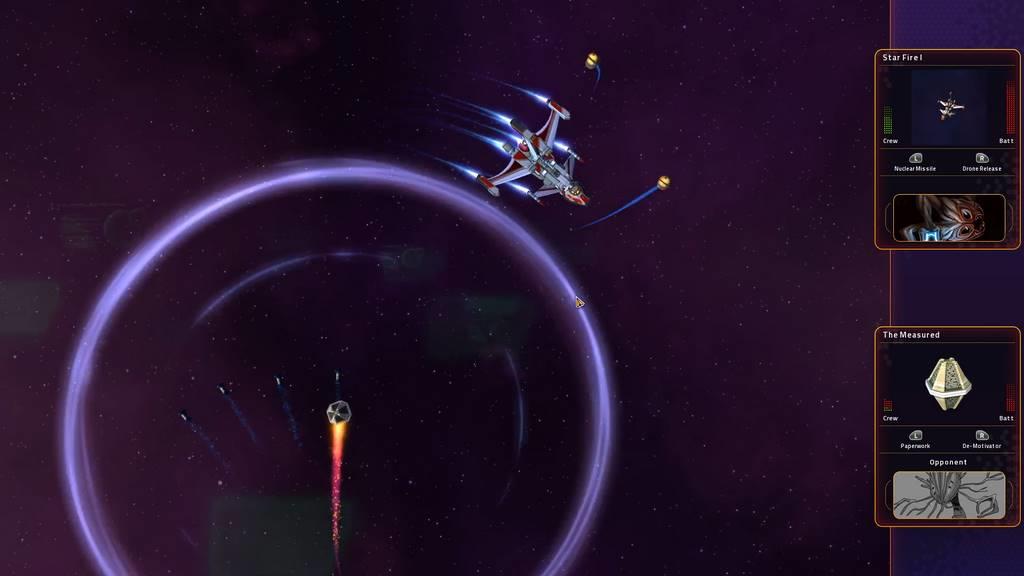 While the marketing methodologies may appear to be similar, there are a great number of differences between what they do. The Star Citizen Hangar Module allows players to modify existing ships (as I understand it) while Fleet Battles is more like a LEGO set: you select bits and pieces from an inventory of parts and use them to design custom ships similar to what’s done in Kerbal Space Program. The unfortunate part about building (or as they call it, “crafting”) ships in this early version is that the parts available to build up a ship are plentiful enough, but there is no way to determine what function a given part performs. There are default ships included that can be copied and edited in the designer, which allows you to decompose the elements of a ship, but you still end up with a set of cannons being described as “Scryve Small 02,” and a fairing on the side of the ship as “Scryve Large 03.” Hopefully this is merely an indication of this being beta-level software and not foreshadowing of a great idea being implemented poorly. The primary purpose of the crafting component is to allow the player to create weapon and ship capabilities to support their chosen fighting style, which should in theory add a nice additional layer of sophistication to the fighting aspects that historically have been the central focus of the entire series, so I hope more attention will be paid to making it more user friendly.

Star Control is currently available at a discounted price over what it will cost when completed. It is important to note that you are buying into the privilege of being an early beta tester at a good time—you will automatically get all subsequent betas, as well as the final game. They are loosely planning to release the whole enchilada sometime in 2018, but I would take that with a large grain of Andorian salt. This is an ambitious project and those have a long history of disappointment when it comes to release dates. As with any early access, you're betting on them succeeding. In exchange, you get to be involved as they are building the game and still open to suggestions. Not a bad deal, really, despite the minor risk.

With that in mind, the question becomes: Is Fleet Battle worth $30 as a standalone game? (UPDATE  $30 will get you the entire game, not just Fleet Battles. Fleet Battles is just the first feature to be in beta.)

Questions of value are personal in nature, so the best one can do is describe the experience of playing the game and allow the reader to make his or her own decision. Having already decided that the Crafting component is not yet ready for prime time, there remains only the Fleet Battles part to look at. In its current form, players can choose single player, local match, unranked play, and ranked play. The latter two are online play and at this early stage I was unable to find an opponent. The single-player mode does, however, give us a pretty good idea of what the battles will be like. 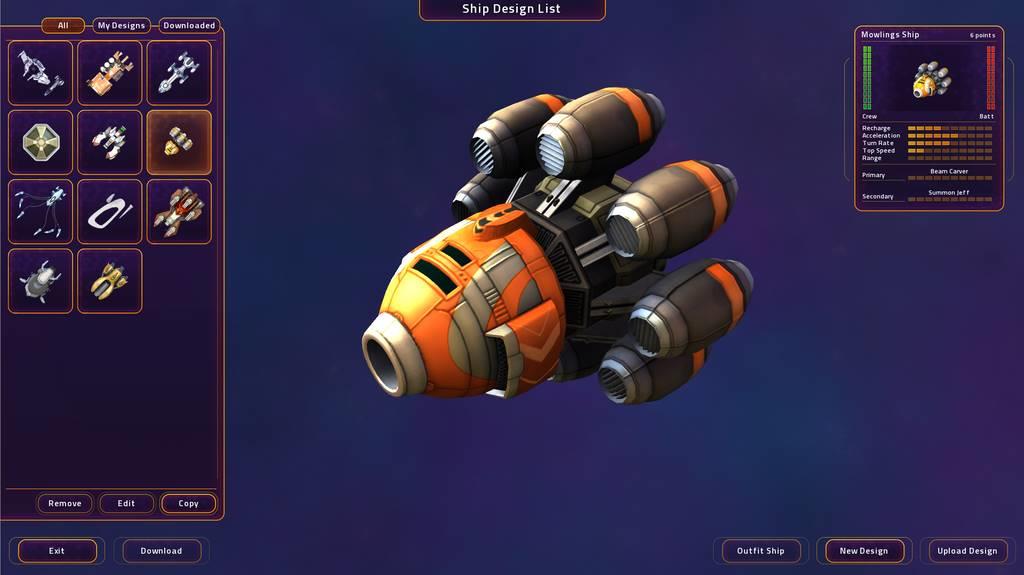 Battles start with each player selecting the ships to be included in the melee. Fleets are limited to no more than 14 ships each, but each disparate ship has a point value assigned to it. Fleets could be assembled with up to 14 relatively weak ships, or just one or two mega ships. Each ship fights until it is destroyed, so a single mega ship would have to survive 14 battles with something akin to a rowboat to win the overall flight. Note that it is not actually ships that get destroyed; true to the original Star Control, a ship is defeated when all of its crew are dead. Crew deaths come from enemy hits, of course, but they can also occur from accidental collisions with celestial bodies. Those collisions are surprisingly common as gravity plays a big role in the way battles are fought. Sure, there are planets and asteroids to run into, but there are also diabolically clever gravity weapons that can be used by opponents, too. There’s nothing like getting smacked with a black hole to ruin your day!

Battles can be controlled with either the keyboard or a game controller, but I found the game controller to be the better choice, especially in local multiplayer. Early battles had a notable tendency to devolve into circling battles similar to WWI dogfights with the additional hazard of a single moon in the middle. Although I did find that when using a larger, less nimble ship against a fast, quick-turning ship, a better strategy was to stretch the fight out with a number of passing attacks. In either case, there was a lot of frantic maneuvering followed by frantic button mashing as we got within weapons range. It definitely mattered which type of ship was selected at the time, and it only became more important when you defeated your opponent and had no idea what kind of ship he would select to come back into the arena with. This works as a manner of leveling in that the defeated player knows two things about the next battle: he knows what ship the victorious player will be using, and he knows whether or not it will still have its full complement of crew members. As you can see, this aspect of the gameplay is where the decisions made in crafting your ships and selecting the fittest of them for each battle becomes important. Ultimately, the strategic aspects of Fleet Battles are centered around resource management and an understanding of your opponent’s fighting style. This is as it should be.

While it remains impossible to say where Star Control: Origins will eventually end up with regards to the ambitious goals the developers have, it is safe to say that one of the fundamental components of the overall game, namely fleet battles, is coming along nicely. While the crafting itself may be in need of further refinement, the actual Fleet Battles part is showing a great deal of promise. Whether you choose to buy into the one piece at a time marketing plan or decide to wait to see what comes next, Star Control: Origins is one to keep your eye on.