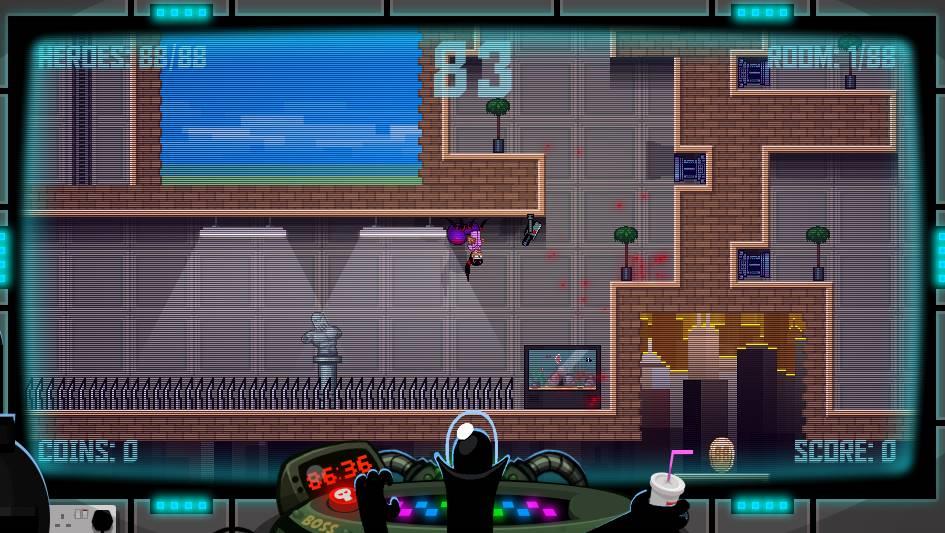 Most games have a protagonist, a hero if you will. Their main job is to take out some evil villain who’s kidnapped a princess, or an organization bent on world domination. They get the job done, save the day, and everyone is happy. Sometimes, though, just one hero isn’t enough, so someone has to join the fray and lend a hand. But what about those times where just one more hero isn’t enough either? In that case you’ll need a few more, say…97 more? Sounds insane, like it’s the plot to some sort of action movie, but it’s actually the basis for the game 88 Heroes: 98 Heroes Edition for the Nintendo Switch.

The plot is simple: Dr. H8 (yes, it’s actually spelled that way) wants to take over the world and it’s up to 88 different heroes to try and take him down. Except this is the Nintendo Switch version so we have 98 different heroes. The game has a few different game modes, including one exclusive to the Switch, but they work roughly the same. The main mode is 88 Mode where you have 88 lives to clear 88 rooms. In each room you have 88 seconds and the mode has an overall timer of 88 minutes. Clearly the number 88 is kind of a thing here. I should point out, though, that there are 98 heroes in the Switch version but you still have 88 lives. As far as I can tell the game randomly chooses 88 of those 98 heroes to use in each run through of the game. I’ll explain that reasoning in a moment.

The 98 heroes you’ll play throughout the game are all different and each have their own unique traits and personalities, but one thing is common among all of them: one hit will kill them. As for those unique traits, a lot of them let you attack enemies, some let you break the walls and floors that surround you, some do nothing at all, and some are completely useless and/or stupid. Don’t get me wrong, watching a lot of these can be kind of funny. For instance, one hero is a dog that attacks with a Frisbee and another is a basketball player who attacks with his basketball. In both instances however, you then have to retrieve your weapon to use it again; otherwise you’re just another hero who can’t attack. The completely stupid heroes are the few who I tried to use their attack and it basically blew up in my face…sometimes literally, killing my hero outright before I even got to use him. 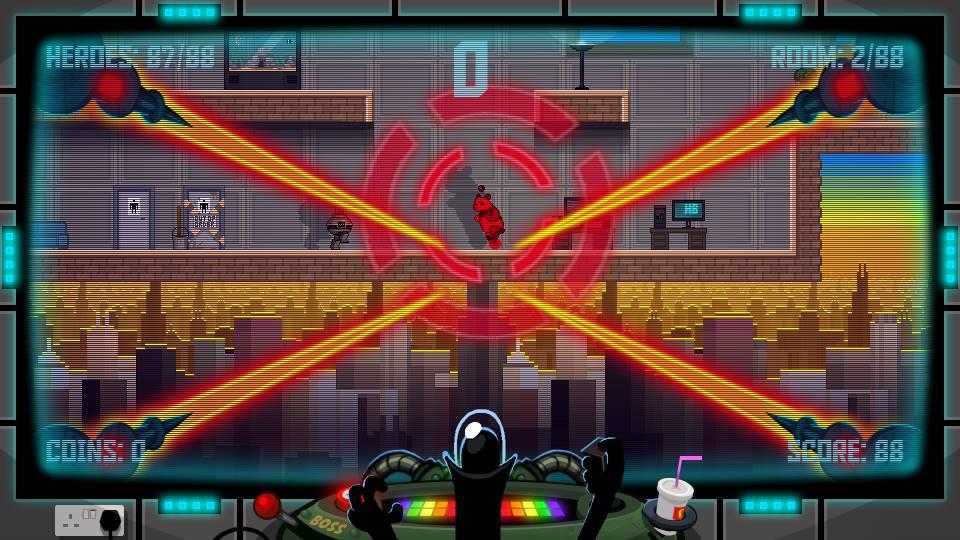 I’m not saying that’s a bad thing though; I can certainly use the laughs from the heroes as there are other things that can frustrate me. Whenever you start or restart a stage you’ll get a couple of hint boxes that describe your current hero and how they work. The problem is that these boxes remain on the screen until you move a certain distance away from the starting point and will reappear when you move back towards it. The problems here are twofold. First, the timer will actually be counting down as soon as the stage starts, so you’re using up time while learning how your hero works. This is only a problem your first time using that hero if they ever come up again (you change heroes even after completing a stage, meaning they will cycle back around eventually). The second problem is that there were a few times where I had to basically take a leap of faith because the hint boxes were obscuring my vision so much I couldn’t see what was in front of me.

Another issue is one that’s a fun idea in concept, but a bit flawed in execution. The game is actually being played via a monitor within H8 Inc. with Dr. H8 watching you. It’s a unique concept, I’ll give it that, but occasionally there will be some other things going on behind Dr. H8 (i.e. his minions walking across the room) that will briefly obscure your vision a bit. The whole “viewing through the monitor” thing is a good idea and one that I’ve rarely, if ever seen in another game, but I really don’t like having something else obscure your vision. It’s not like it’s a dangerous issue or anything, just really annoying. 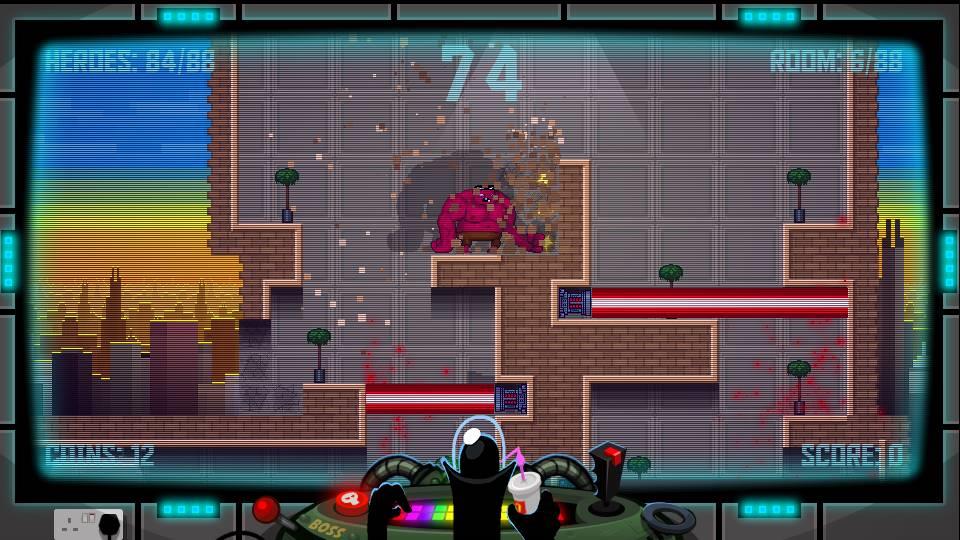 The game itself I really don’t have much of an issue with, but I wouldn’t say it’s perfect by any means. You essentially have 88 lives and can regain a hero by collecting the silver and gold coins along the ground. Silver coins are worth one coin while the gold coins are worth eight, because of course they are. Once you hit 88 the game will give you three random heroes to choose from to revive—you can only revive one per opportunity. However, even if you run out of heroes it’s not quite game over as you essentially have unlimited continues with that last hero. Also when you die the main timer, the one that begins the game at 88 minutes, resets back to whatever it was when you first reached that level. In other words, as long as the main timer is nowhere near running out you basically have unlimited tries to clear the game. Just keep in mind that you have to clear each room within an average of 60 seconds to be able to finish the game in 88 minutes.

If you’ve finished the story mode or just need a break from it, there are a couple of other modes you can try. The Magnificent 8 allows you to pick any eight heroes you wish, then try and complete the 88 rooms from 88 Mode. Think of this as kind of like a harder version of 88 Mode in a way as you really have to know each room front and back and choose the right heroes to take through. Solo is even more difficult as you have to clear all 88 rooms without dying once, making the hero you choose even more vital. Finally is H8 Mode which is exclusive to the Switch version of the game. You get 88 heroes and only have to clear eight rooms, but the rooms themselves are much more difficult than anything else you’ve faced before. Needless to say I lost about a quarter of my heroes just trying to survive the first room. 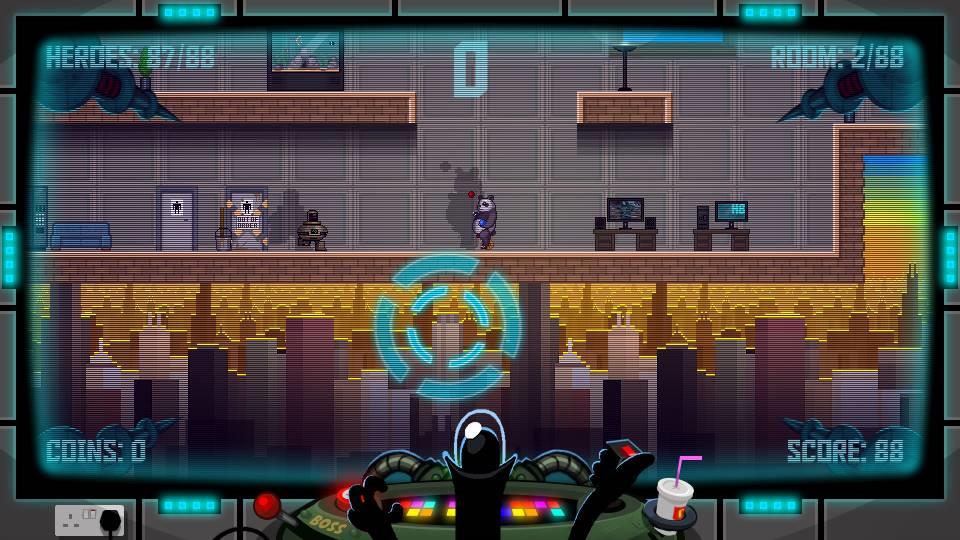 88 Heroes: 98 Heroes Edition is a fun game, but it does have its head-scratching moments. The game itself is fine, but the selection of heroes makes me wonder. While a lot of them are fun to play with (my favorite is a bat that can move in any direction and nothing else in the stage moves unless the bat is also moving), a lot basically do nothing but jump, albeit somewhat differently, and others have attacks that are either one time uses, meaning they revert to just jumpers afterwards, or their attacks seriously backfire when used such as shooting a gun that actually recoils you backwards, often into death. That being said though the game is pretty fun and I do recommend picking it up. With 98 heroes total in the game, you’re bound to find some that you really like and, if worse comes to worse, you’ll definitely get a laugh at seeing how many ways you can die.

88 Heroes: 98 Heroes Edition is an enjoyable game with an interesting and unique premise, plus the multiple game modes do make for a lot of replayability.  However, some of the heroes basically do nothing but jump and some of the ones that can attack have attacks that can easily backfire if you don’t know what you’re doing, making a lot of the game trial and error.  Also if you get down to just one hero, get very used to him/her/it as you do have unlimited continues, but unless you get enough coins to revive someone, that’s all you have for the rest of the game.