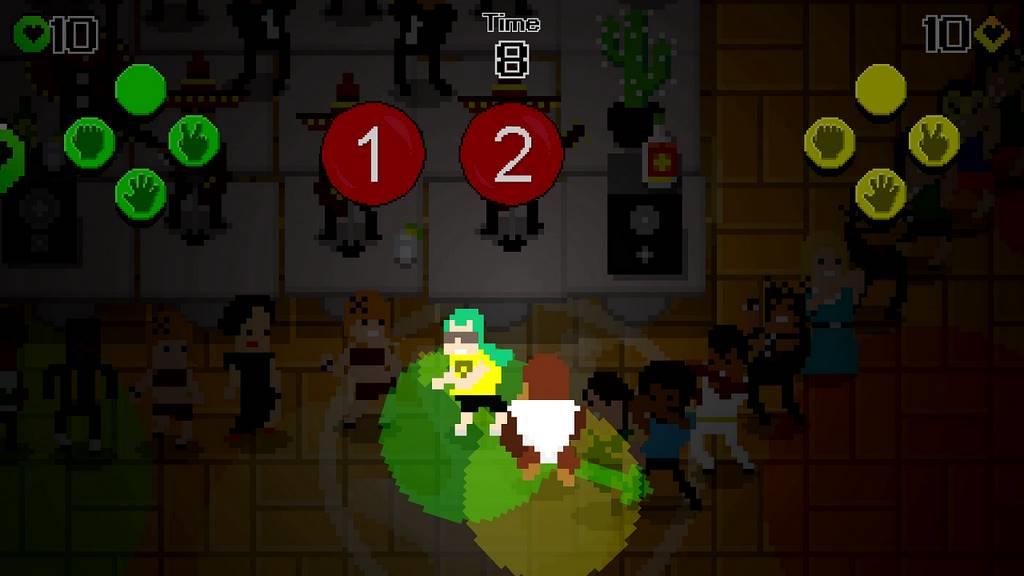 I’ll just get this out of the way now: I can’t dance.  Unless I’m standing on a big metal block with four colored arrows I’m not one to hit the dance floor.  Then again I don’t think Dance Dance Revolution technically counts as dancing, but put a controller in my hand or under my feet and I’ll try anything.  Thankfully it’s rather simple to do the conga in a video game as proven by Conga Master Party.  The question is if simple translates into entertaining.  Let’s find out with Conga Master Party for the Nintendo Switch.

Conga Master actually came out on other systems last year, but with the Switch version there are a few additions such as exclusive multiplayer modes and amiibo support to unlock new characters, but first let’s talk about how to play.  Conga Master Party is rather simple: you use the L and R buttons to turn your dancer as they automatically move around each level.  That’s right, you don’t directly control the movement of your dancer; you can only rotate them left or right as they move across the dance floor.  The game’s main mode is Story Mode where your goal for each level is to attract a certain number of people to join your conga line before you can head out the door and end the level.  Each dancer on the floor will have an icon over their heads when you get close enough to them to show what kind of person they are.  There are four different icons and you need to attract enough of all four before you can leave the stage.  Attracting dancers is simple enough: just dance near them for a bit and you’ll see their meters start to fill up.  Once it’s full they’ll join your conga line.

However, it’s not as simple as just dancing around for a bit and collecting new friends to join the fun.  Each level actually has hazards to try and ruin your fun.  Muscled-up guys will shove you away from them, banana peels might litter the ground, even a janitor mopping the floor will trip you up.  The worst part about that is the water trail can be hard to see and you could end up slipping on it and not even realize what you slipped on.  On top of that if you accidentally bump into another dancer, you’ll lose your connection with them and have to start all over.  There is also the occasional pig on the dance floor that can join the conga line the same way the dancers can, but having a pig join you will actually decrease your motivation.  Contrast to that are occasionally animals such as cats that will easily join you and boost your motivation a bit.  You’ll also see an occasional green orb that you can pick up (sometimes you have to run into something to knock it down first) to give you a bonus such as more motivation or a wider area to attract dancers.  The venues will also have VIP areas that you can unlock once you have a certain number of dancers with you, and these areas will have more dancers and possibly power-ups to collect. 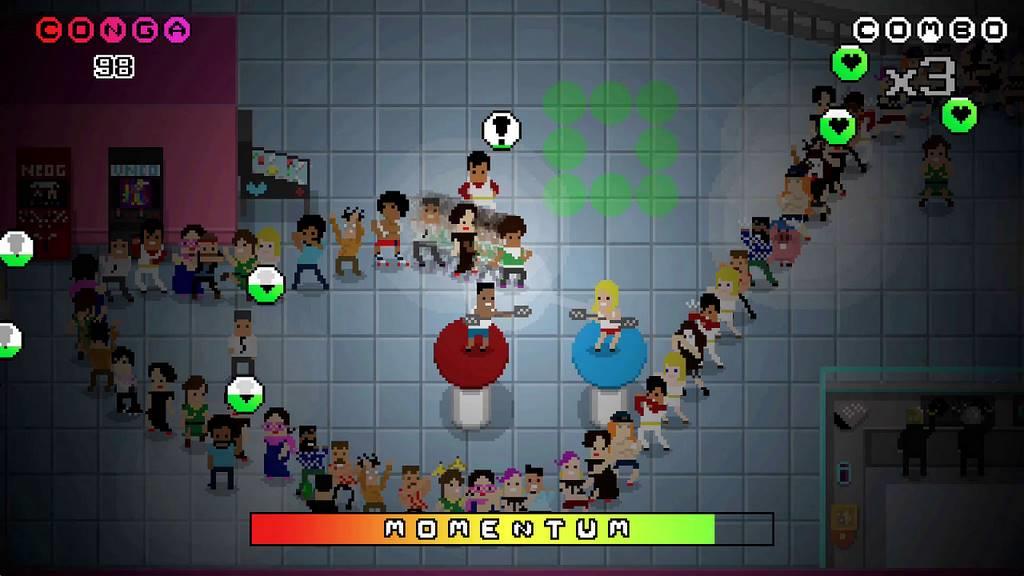 Between stages you play a bit of a mini-game where a spaceship comes down and starts to capture your conga line.  You have to mash the A button as fast as possible to run away from it while also jumping over the occasional pig.  Each pig you jump over will get you a ticket used in a bonus game that proceeds this segment and any survivors in your conga line will join you when you start the next stage, though unless I’m just terrible at this part you’ll only have a maximum of about five or so finish due to how close the spaceship is to start with.  The bonus game at the end of this is basically a roulette wheel that you can spin once for each ticket you earned and can gain power-ups for the next stage or even new dancers you can play as.  The dancers you choose from have a nice range of stats and some of them even reference various bits of pop culture.  Two of the first ones that I unlocked were Toxin and Steve.  Toxin looks very similar to Roxy and Poison from Final Fight, while Steve is definitely Steve Urkel from Family Matters.

While the story mode is kind of short in length, there are a couple of other things you can do.  The other single-player mode is Endless where you choose your dancer from those you have unlocked, choose a venue from what you’ve unlocked in Story Mode, and then just see how long you can last until your motivation runs dry.  This can be challenging…until it becomes really easy…and then becomes challenging again.  Early on there are a lot of dancers in the room, but it might be a tad difficult to attract some until your line becomes longer.  Once it does you can then attract more dancers easier since as long as someone in your conga line is near a dancer, you’ll start to attract them.  However, you might soon get to a point where potential dancers are spread really thin.  During my first run I ended up with eighty-two dancers in my line.  It was basically long enough that I just had to pass someone once and the rest of my line did the rest of the attracting, but there were so few dancers on the floor at that point that it was hard to get to someone in time.  I like the idea, but I was a little frustrated that what did me in was a lack of dancers as opposed to a lack of skill. 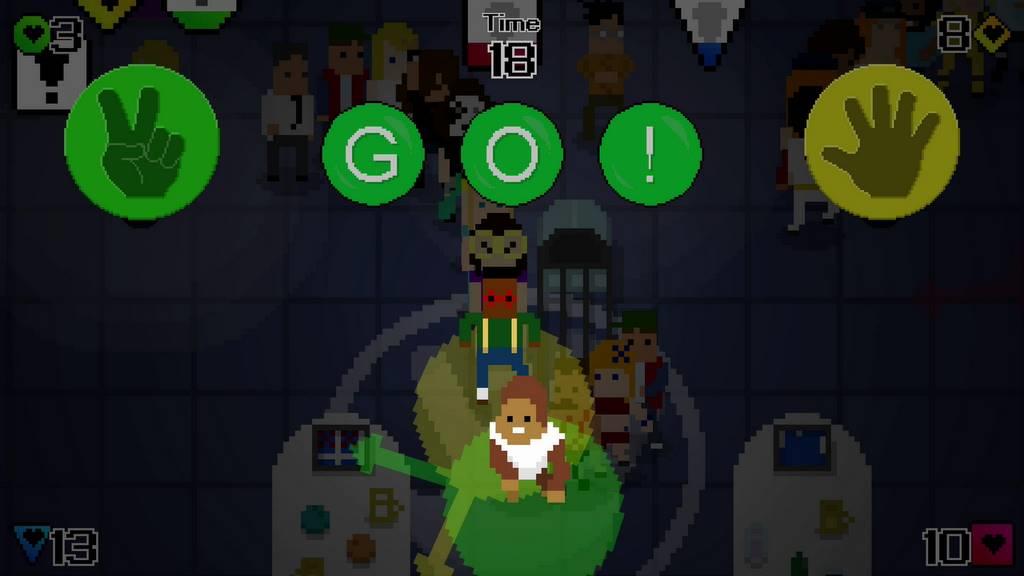 Where Conga Master Party shines pretty well is the multiple multi-player modes.  Two to four players can take part in several modes with names inspired by other various video games.  For instance, in Cut the Rope players can pick up a pair of scissors and essentially cut another player’s conga line to shorten it and make them lose dancers.  1-2-Conga lets you pick up an item that makes the other players have to position their Joy-Cons in a certain way as shown on screen or else they’ll lose dancers.  Then there’s Mortal Konga where the goal is to basically see who can create the longest conga line while sabotaging their opponents.  Come to think of it, that’s kind of the goal in a few of the multi-player modes.  Sadly Conga Master Party only supports local multiplayer as there’s no online play or even AI bots to play with.  That’s kind of disappointing as the Story Mode doesn’t take all that long to complete once you know what you’re doing, and the Endless Mode can only do so much.

Overall though, Conga Master Party is enjoyable whether it’s solo or with friends, but it’s the “Party” part that really shines as getting friends together for multiplayer can make for some fun times.  That’s not to say that the single-player modes are bad, but even adding the ability to play the multi-player modes online or with AI opponents would have been great.  For ten dollars this is still a good game solo, but definitely worth looking at if you’re looking to do some multiplayer with friends.

Conga Master Party is enjoyable, but kind of short if you’re playing solo as the Story Mode doesn’t take too long to complete once you know what you’re doing, and Endless Mode can only go so far.  The multi-player modes on the other hand can make for some fun times among friends.  Sadly it’s local multi-player only with no online play or AI opponents to compete against.  It’s still fun either way, but more so with friends.