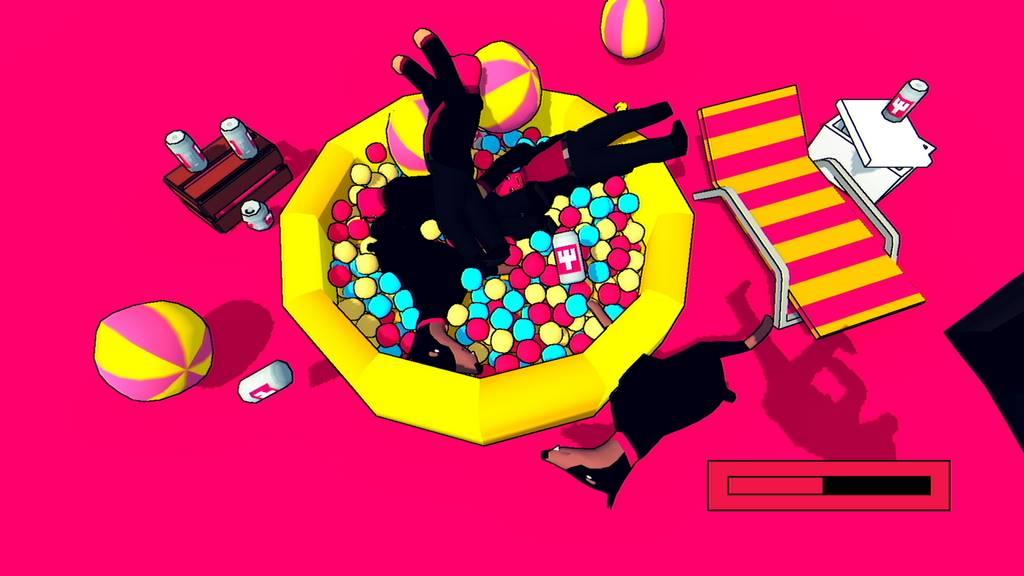 Every now and then it pays to take a look at where the herd is running and just pick a different direction for yourself. If the pack is focusing on DLC and micro-payments, market your game as “buy once, play forever.” When the pendulum swings so far in the direction of multiplayer everything, throw the shy and/or the introverts a bone with a deep and rewarding single player campaign. When the new norm is 4K graphics and photo realistic scenery, go minimalist. Maybe not Minecraft chunky, because that’s really kind of silly, but certainly feel free to take a more minimalist approach. And when the asking price for an FPS hits an incredible $60 just for the most basic version, charge $10 for yours.

This is exactly what Devolver Digital has done with their new FPS called High Hell. These guys have taken a minimalist approach, then pared it down even further. How many weapons can you unlock? None. How many special powers can you imbue your character with. Again, none. How long will it take for you to decorate your avatar? Ha ha ha, that's funny, tell me another one!

This is a bare bones game, and it is proud of it.

It has every right to be proud. At first glance, you can be forgiven for thinking that such a short, nearly feature-free game is going to be boring, buggy, or just plain old bad. Or, possibly, all three. In this case, you owe it to yourself to take another look. You can trust me on this, because I went through the same progression. It was on maybe the second or third level that I realized that I was smiling while playing. After a moment of reflection as to why I was grinning like a fool (well, a reason beyond that fact that I am, in fact, quite foolish at times) and realized that it was because I was having nearly 100% hassle-free fun. I wasn’t scrounging around or looting bodies for ammo. I wasn’t searching for health packs (although I would be later), I wasn’t deathly afraid of…. death, because I knew I would get not tossed back to a 20 minute old checkpoint, and I never turned a corner to find three opponents ready and waiting to riddle me with rounds while I realized that I needed to reload my gun. I mean, they were there, but my gun never runs out of ammo. This is a game that can be well played using nothing but a "run, gun, and have fun" strategy, if you so choose.

Now don’t get me wrong; the game isn’t stripped down to the point that you have no goals - there is at least one objective for each level, in addition to a “mention” if you also clear the level of opponents. I never actually tested to see what would happen if I tried to leave a level with the assigned objective(s) complete but surviving opponents left unkilled. I seem to have missed out on that because it was so much fun to kill them all. There are also some randomly placed stacks of paper money on just about every level, but those aren’t there to be collected. Rather, you use a lighter and burn them. I have yet to discern the reason for this. Just LOLZ, I guess. 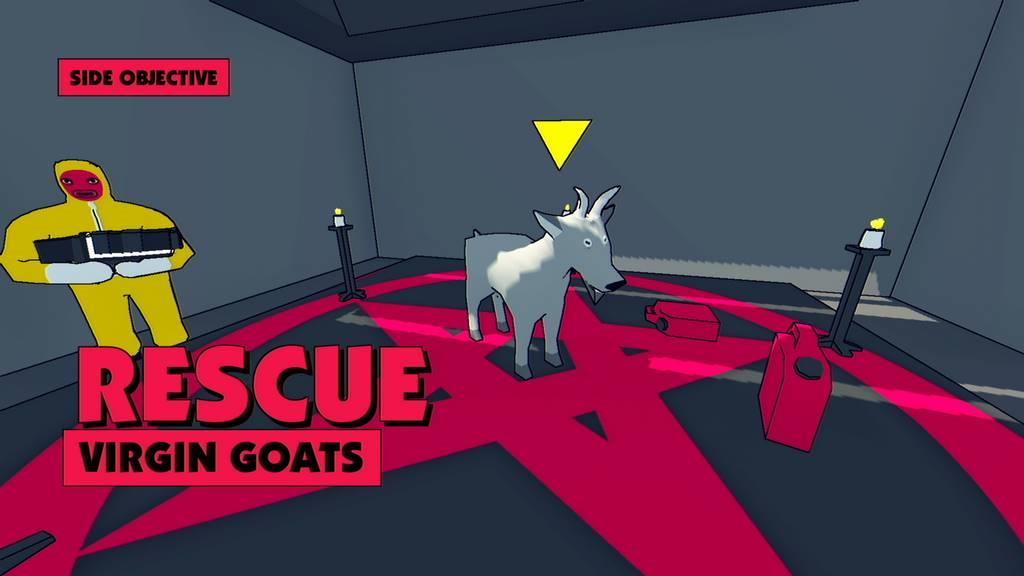 I also need to point out that “minimalism” does not necessarily equate to “too easy.” Yes, there are a few very easy levels wherein it’s just a matter of killing them before they kill you. Straight shooting, so to speak. Then there are levels that are a little more puzzle-like. You can shoot and shoot until the wife hollers “Come eat dinner now or go hungry” and still not kill the guy you’re plastering with rounds. In cases like this, you have to try new tactics. The tricks to killing one of the more difficult targets aren’t all that hard to figure out if you pay close attention to what’s going on, but they can be very tricky to accomplish.

This is probably a good time to fess up: I am currently stuck on Level 10. I know what needs to be done, but I simply don’t have the dexterity and quick reactions to get it done. Sadly, there is no way to skip a level. The good news here, though, is that I cannot possibly accidentally let slip any spoilers for levels 11-plus. I’m not ruling out the possibility that Level 10 is poorly designed or just next to impossible, but I strongly suspect that I am the problem here. Not to worry - I’ve been married long enough to be used to doing everything wrong, or at least being routinely accused of such. In any event, this is the reason that I don’t know why I’m burning money on each level; the purpose for that side task may become apparent later in the game. 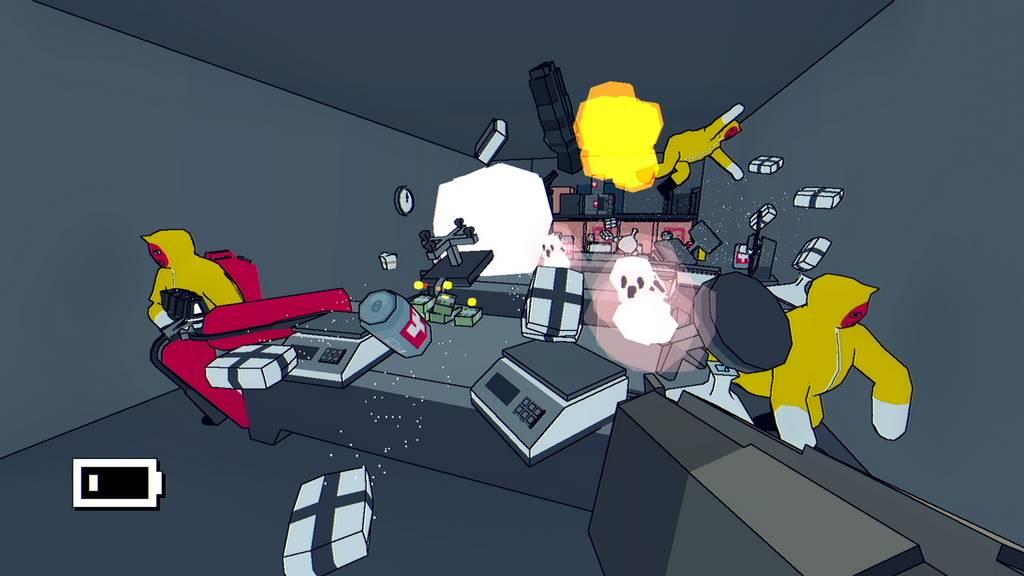 A simple, low cost game can’t all be good, though, right? There has to be a cost of some sort for the stark minimalism on display here, so what is it? Well, it’s exactly what I just said: it’s in the display. There are probably only six or seven colors used in the entire game world, and three of those are various depths of black/grey. Add in some white and two shades of red and you have the entire rainbow, except for the yellow money-burning flames. High Hell is an example of a game that looks like it was designed for the lower resolution of VR headsets, but wasn’t. Again, this does not distract from the game play at all, but if someone were to remake it with slightly more than a glancing nod towards realism, I wouldn’t be mad. That said, I would still be mired in a sticky pile of Level 10 no matter what it looked like, so there is that.

I mentioned that you only have one weapon to use for the entirety of the game (or at least the first ten levels - I may never know what comes after that) and some players might find that to be deficient. I would certainly confess to wishing for a grenade now and then, but for the most part I found the single gun to be all I really needed. It kills most of the enemies with a single shot, there isn’t even a glimmer of bullet physics to compensate for, and you never pull the trigger only to hear the gut-wrenching ‘click’ of an empty chamber. Simplicity has it’s own merits, and they shine clearly in High Hell. 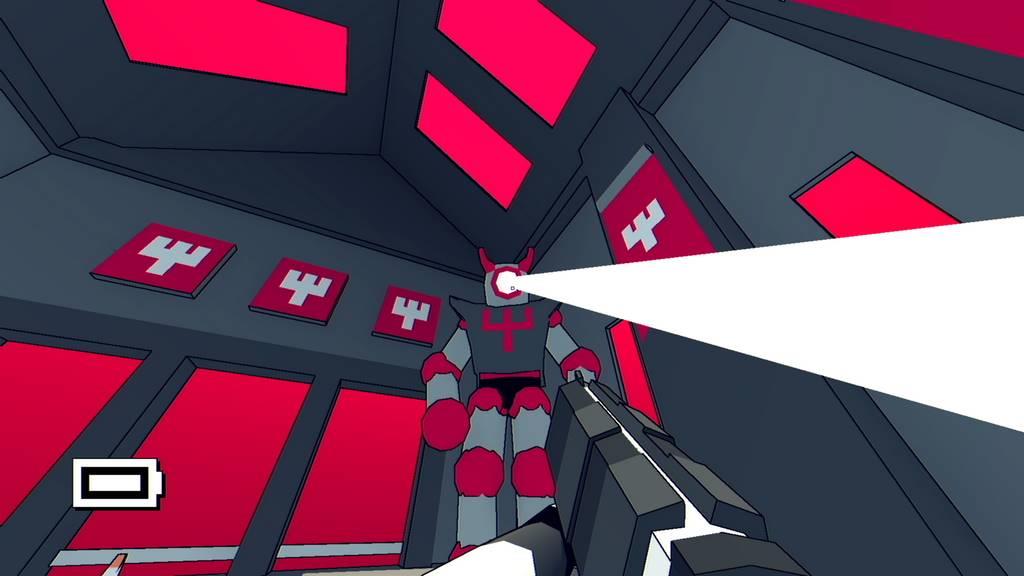 With a full playthrough reportedly lasting only 1 - 2 hours, there doesn’t seem to be enough bang for the buck to justify the purchase price, no matter how low it is. The thing is, though, the game at its very core is so simple that it is up to you to find the form of fun that most appeals to you. There are no lengthy dialogs and/or narratives to sit through, and the level design is such that you can play it in various ways. I started with the cautious “kick down the door, drop into a crouch, slllooowwwllllyyy peek around the corner, kill whatever I see” methodology. My intent was to learn my way through the game, then circle back and try to do it faster. As we all know by now, I have been stymied in Plan A, and Plan B is off the table because I can’t just run past the problem in Level 10. I either figure out a way to kill that guy or I've gotten all I'm going to get out of High Hell. Your mileage will (hopefully) vary, of course. In fact, it probably will.

High Hell is an example of the kind of interesting and fun game that can be built and sold without a multimillion dollar development and marketing budget. While there certainly is a place for blockbusters like Call of Duty and the like, there remains plenty of room for a decent little $10 shooter. There may or may not be a problem with some of the difficulty levels, but at least one of the developers is active on the Steam discussion pages to address issues and questions. If you’re wondering, I did get a reply regarding my personal problem with Level 10 - he suggested a possible settings change that would possibly speed up my ability to dodge the bad guy, but it was of no help. At some point, you just have to realize that there are just games out there that you’re too old for. High Hell just might be telling me that’s it’s time to move on to something more sedate.

High Hell is ample demonstration that good and simple game play still has a place in world of multi-gigabyte monsters with eight-figure (or higher) development and marketing budgets. It's perfect for those situations when you just want to sit down and shoot things for a few minutes without having to deal with even an iota of realism. After all, they're called "games" for a reason.