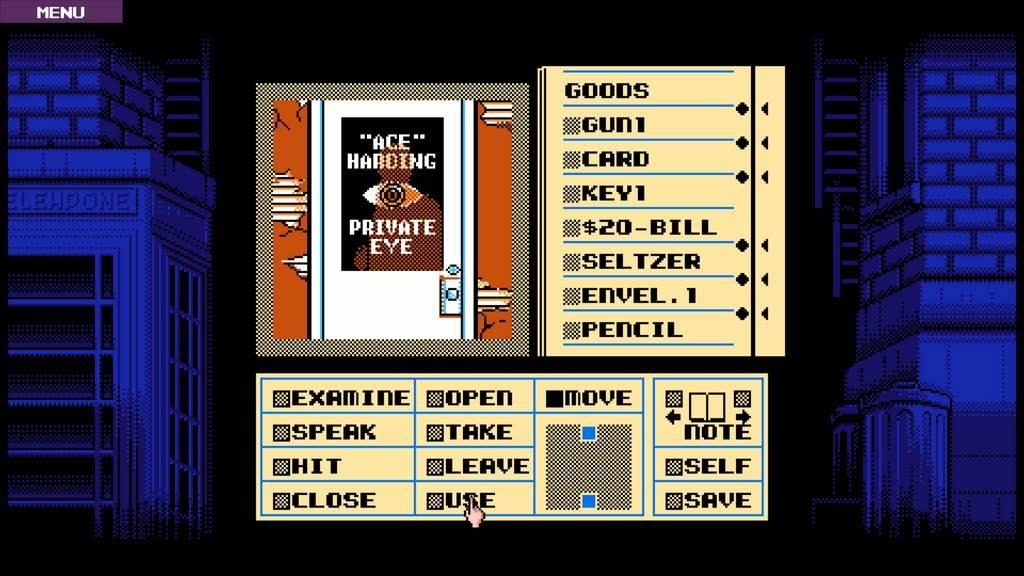 I sit my two teenage sons down in front of the TV with Abstraction Games’ 8-Bit Adventure Anthology loaded up on the PS4. The simple title screen shows splash images for the three included games.

“Okay,” I say. “Here’s the scenario: Imagine that it’s the 1980s. You have been mowing lawns for a couple of weeks and saved up all your money. You’ve ridden your bike down to K-Mart, and you can only afford to buy one game for your NES. Which one do you pick?”

The 17-year-old scrolls through the three games available in this collection. He flips past Déjà Vu, pauses briefly on Uninvited, and finally settles on Shadowgate. He waits patiently while the title screen boots up in 4:3 with a spooky fantasy horror border around it, and snickers a little bit at the 8-bit graphics and chiptune music.

“Go ahead and give it a shot. Remember, in this scenario, this is the only game you can afford to buy all summer, so you are committed.”

He gamely presses the start button and is taken to the first screen. He is looking at a pixelized image of a castle’s front door, set into a stone wall with a decorative skull at its peak. There are several action buttons in a menu to the right: Look, Hit, Take, Open, etc. There is a crude mini map showing the door to the north, and nothing else. There is a box for text, and a box for his inventory, presently empty. 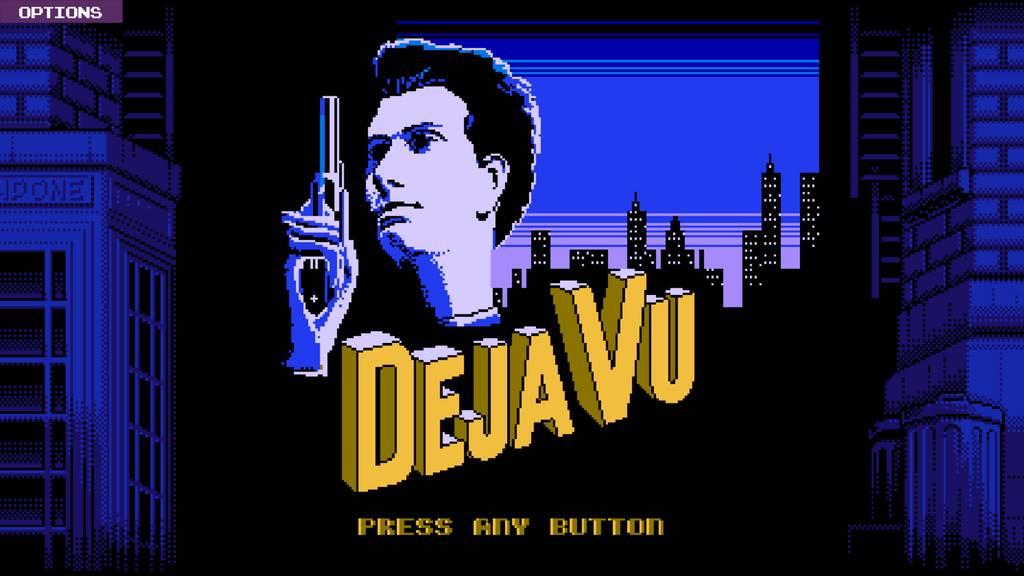 My son carefully reads all the story text that he is presented with, which is surprising, as he usually skips cutscenes whenever possible. He is told that he is the last in a line of kings, and he must enter the castle to defeat the evil warlock, who will in turn raise the dreaded behemoth to defeat him. After fumbling about with the controls for a bit, he manages to click the right combination of buttons to get the door open. He goes through the door to the entryway of the castle. He is greeted there by two more doors.

“What do you do?” his brother asks.

They emphatically agree that they want a hint. 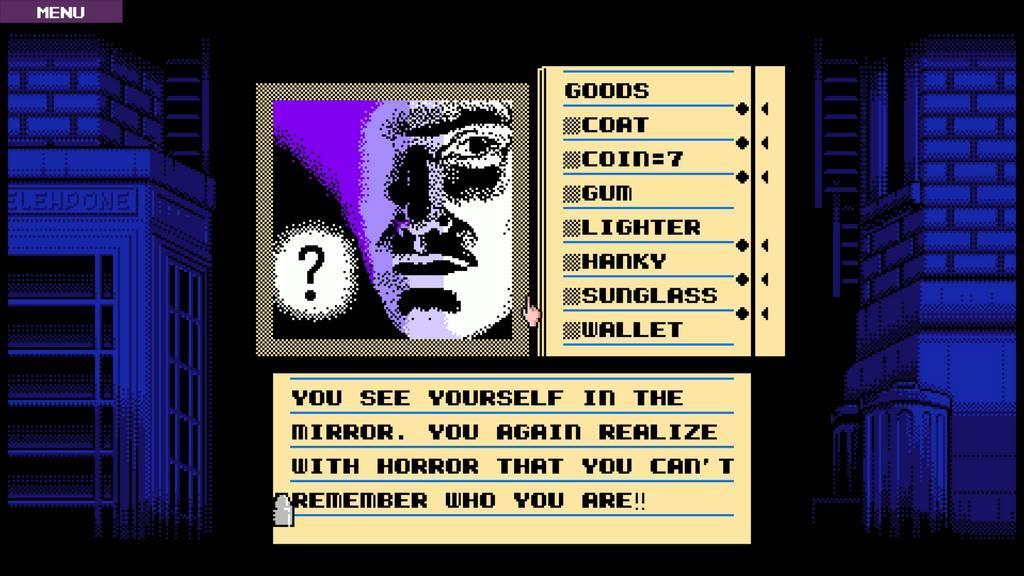 “Look at the skull,” I say. My son moves the cursor to the “Look” button, then clicks on the skull. The skull slides open to reveal a key, resting inside.

“How could anyone ever figure that out?” the 15-year-old asks.

“This is impossible,” his brother agrees. Nonetheless, he grabs the key and moves inside, unlocking the heavy door in the entryway. Within a minute, his character is dead, killed for the sin of picking up a book. No warning, just pick up a book and boom, he’s dead. Frustrated, he hands the controller back to me.

“So much for a summer of mowing lawns.”

And that is 8-Bit Adventure Anthology: Volume I in a nutshell, folks. 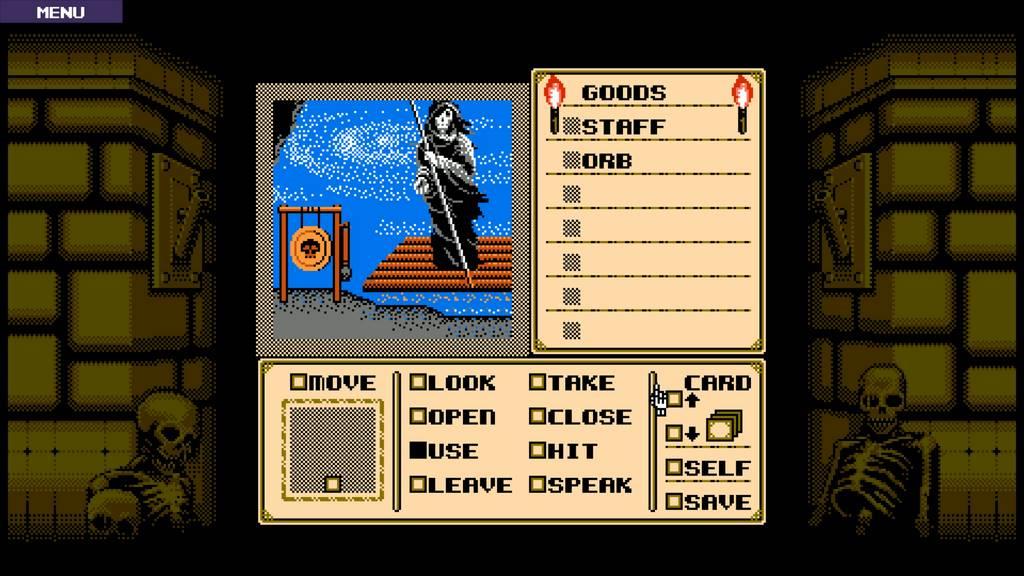 Released on PS4, Xbox One and Steam, the 8-Bit Adventure Anthology offers a collection of three of ICOM Simulations’ point-and-click adventures, first released on Mac and NES in the mid-80s. The games are presented in their original format, with very little in the way of updates or explanation. The presentation is rather bare bones, allowing the user to select between the games, and that’s about it. All three games conform to a similar layout, with the picture/inventory/actions/text windows recognizable from one title to the next. And all three titles are brutally, blisteringly difficult.

To elaborate on the example with my sons: Shadowgate is a game where you are wandering through a castle, solving obtuse puzzles as you go. Almost every room you enter offers some sort of barrier to progression, and it is up to the player to figure out the right combination of actions and items to move forward. It is entirely possible to progress quite far in the game, only to have progress grind to a halt because you missed a previous hidden area and did not pick up an item needed to solve a puzzle. Therefore, it is of vital importance that the player picks up every item they encounter, right? The funny thing is, the game reinforces the opposite behavior, because literally the very first object encountered in the castle kills you instantly when you pick it up, with no warning or explanation.

And that’s how these games are conforming to the old conventions of the adventure genre. Players try to interact with objects on the screen with objects they have picked up, using a variety of obtuse commands. Only trial and error can move the bar, and as the player gains more objects as they move through the games, trial and error becomes an exponentially more difficult proposition. Getting killed doesn’t send the player back to the beginning, but only moves them back a room or two. But often, the player is left with the feeling that entire runs must be abandoned so they can go back to the beginning of the game to try to determine what was missed. The games don’t give any indication, so the feeling that you passed something early on is pervasive. 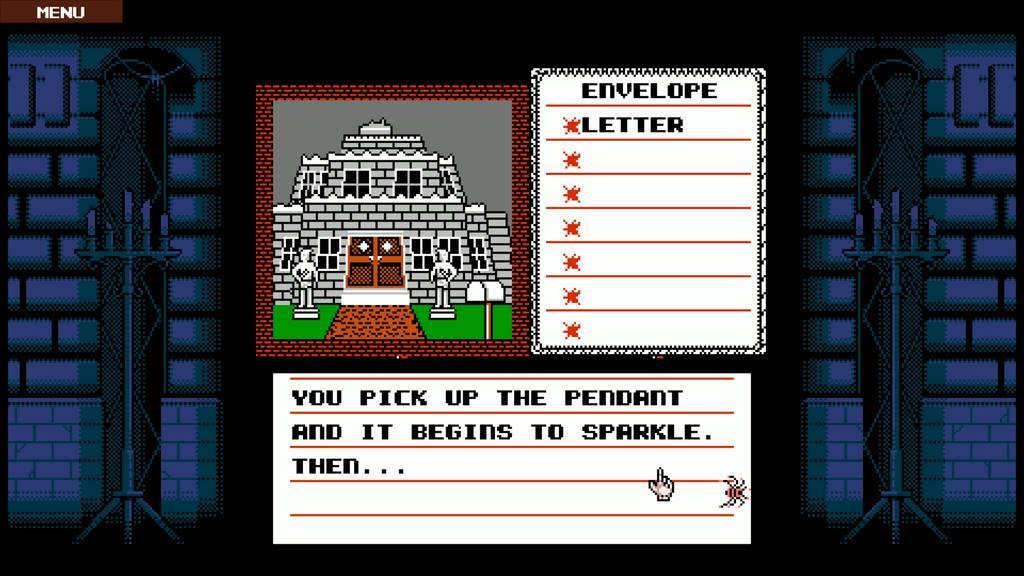 There are three games included, and while the subject matter varies wildly, actual gameplay is very similar between titles.

Déjà Vu is a 1940’s noir story, featuring an amnesiac detective who wakes up in a bathroom and must determine who he is, and how he got there. Before long, he is embroiled in a murder case, and must fight his deteriorating memory while he explores the city, trying to piece together what is happening.

Uninvited is a haunted house story, where the protagonist wakes up from a car crash to discover that his sister is missing. The player moves to a nearby house, where they can explore and die a lot while uncovering the mystery behind the disappearance. There are a lot of monsters lurking about, and a decent number of locations to uncover.

Shadowgate is a fantasy-horror title, with the player exploring an old castle, in search of the warlock lord, because…warlock lords cannot be tolerated. Players explore room by room, hunting for secrets, learning spells, and building the ultimate weapon to overcome the warlock and his behemoth minion. 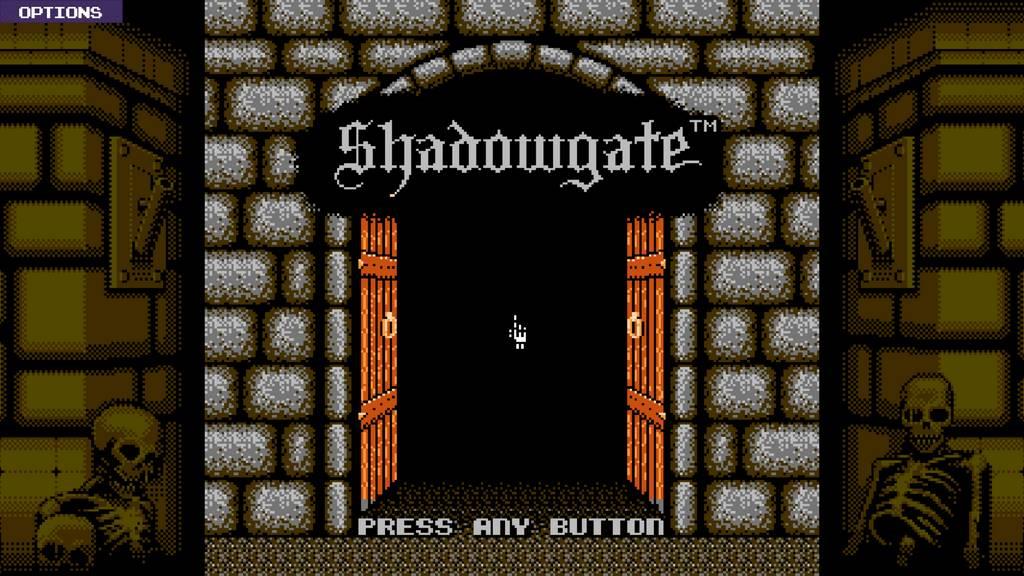 And now I am forced to wonder. How does one score a compilation of three very influential but archaic games? What is a fair score for an older game that is difficult to parse using modern gaming sensibilities? The port itself is perfect, with the D-Pad and the analog sticks allowing for easy control. The 8-bit era graphics look crisp and clean, and the sound is minimal but effective. The games play as intended, but is that intended gameplay relevant to today’s gamers?

In the end, I must concede that these games are an important part of gaming history. I did enjoy sharing them with my kids, who had no concept of such a thing ever having existed. I also got a kick out of taking a trip down the NES memory lane. But with no personal history with these titles, I found playing these games to be insufferable. Folks that did play these games in their heyday might feel very differently about seeing their old favorites preserved for a new era, and there are many games that will never be included on an NES Classic that I would like to see get this treatment.

This collection is an admirable undertaking for Abstraction Games, and I credit them for their work in game preservation. Adventure fans who want to take a walk through the early days of the genre and folks with strong memories of enjoying these titles will love this collection. Beyond that, I can’t see modern audiences finding much here, beyond morbid curiosity and a thousand cruel deaths.

Abstraction Games’ 8-Bit Adventure Anthology: Volume I is a collection of three Mac and NES point-and-click adventure titles developed in the mid-80s by ICOM Simulations. The collection delivers a window back to the time when games refused to explain themselves. These games don’t care if you like them, don’t respect your feelings, and cannot be bothered with your tears of frustration. Only the toughest of the tough need apply.