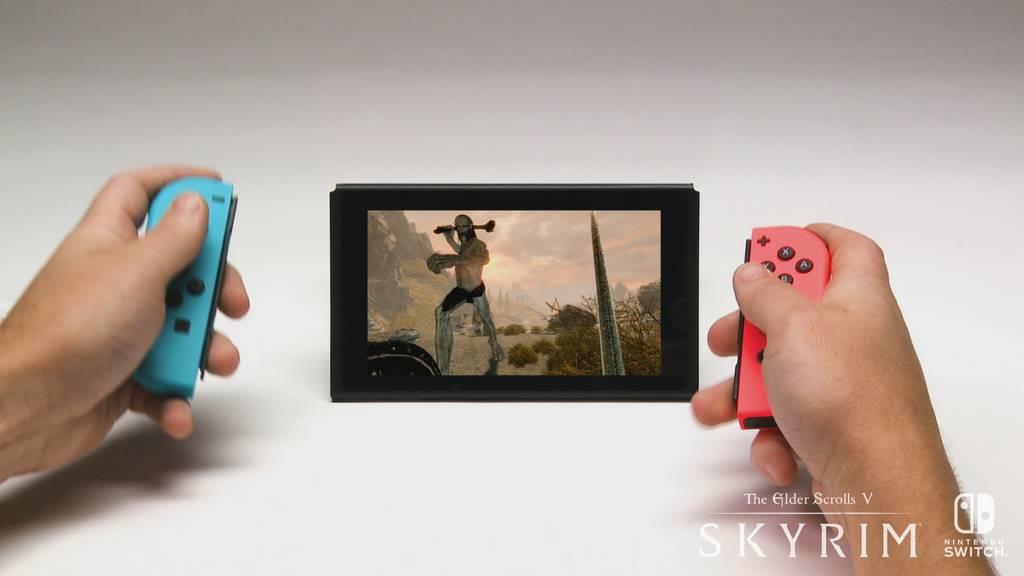 What more can be said about The Elder Scrolls V: Skyrim that hasn’t already been said. Six years on, the game is ubiquitous and Bethesda keeps re-releasing it. It’s gotten so bad that it’s a running joke that executive director Todd Howard won’t announce or release any other game anymore besides Skyrim. One of my favorite jokes of 2017 was a fake Kickstarter campaign, where Howard was supposedly demanding an $8000 crowdfunded ransom just so that he wouldn’t re-announce Skyrim at E3 2018.

In all fairness Skyrim deserves its ubiquity; it’s a modern classic and one of the best RPGs ever made. That said, I still wasn’t sure I wanted to buy it again. I played Skyrim to death back around 2012, and I skipped last year’s remastered edition—why pay another $50 for fancier graphics that I can get from mods for free? So when it came to reviewing the Nintendo Switch version, I had two simple questions: how does it look, and how does it run? I knew what Skyrim was already; a reasonably thorough stress-test would suffice. Oh, but I underestimated Skyrim again. This game pulls you in; before you know it, you’ve sunk an embarrassing number of hours into its labyrinthine web of side quests and skill trees.

Let’s get this out of the way first: as far as I can tell, Skyrim on Switch is the remastered edition that released on PS4, Xbox One and PC last year, but running at low-medium spec. This means it’s missing a few of the more intensive effects like ambient occlusion, but it does support the improved shaders, water effects and textures. It’s also locked at 30fps—I didn’t encounter any stutters during the hours I logged—and as far as I can tell, in docked mode Skyrim runs between 900p and 1080p, whereas in handheld mode it uses the Switch screen’s native 720p. Of course this is just me eyeballing it; we won’t have definitive stats on graphics and performance until Digital Foundry does their exhaustive analysis. But to my partially untrained eye, you aren’t losing a lot of graphical fidelity with Skyrim on Switch, at least not nearly to the extent that Doom was scaled back.

Now that the nitty-gritty is out of the way, what can you expect out of this port? You get the entire original campaign and all three DLC expansions—Dawnguard, Hearthfire and Dragonborn. In addition the Switch version has some Nintendo-esque exclusive features. For starters Skyrim supports motion controls if you play with detached Joy-Cons. You can raise your shield by flipping the left Joy-Con vertical, and use quick flicks to bash with it. Swinging the right Joy-Con will swing your melee weapon; fast swipes for quick attacks, strong swings for stamina-eating power attacks. Both the Joy-Cons and Pro Controller support motion aiming for firing arrows, and this functions exactly the same as aiming in Zelda Breath of the Wild or Splatoon 2. You can even use the Joy-Con’s HD rumble to feel the correct tumbler positions when picking locks. 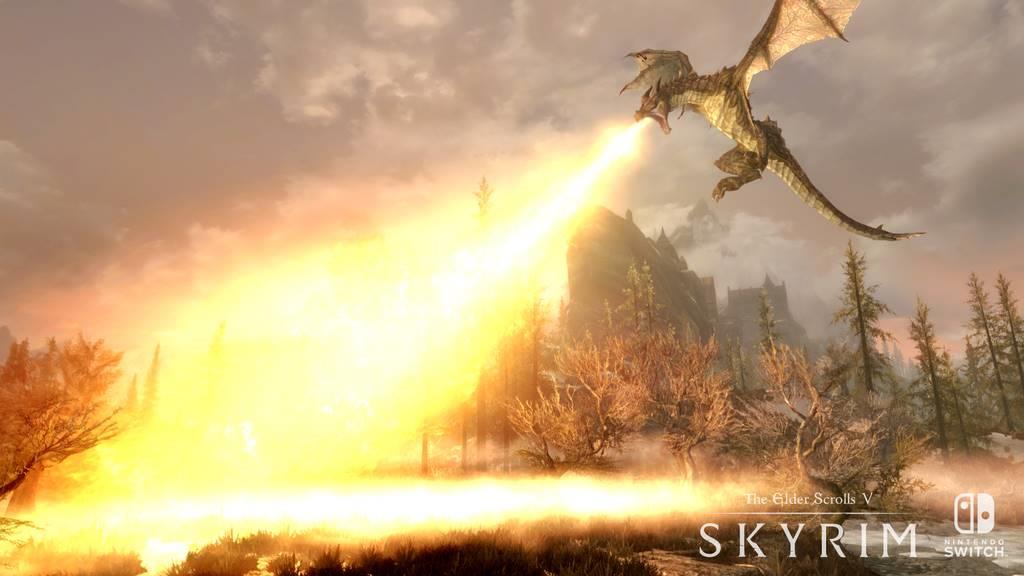 These motion controls are a fun addition and they were surprisingly responsive. That said, like most motion controls they felt kind of gimmicky, and I turned them off fairly quickly. The other Switch-exclusive feature is Amiibo. Supposedly you can scan one of the toys-to-life figures once a day for helpful loot drops, and scanning a Zelda series Amiibo will even grant you Link’s blue Breath of the Wild tunic, the Master Sword and the Hylian shield.

I tried testing this out but for the life of me, I couldn’t get it to work. I followed the in-game tutorial: I mapped the Amiibo spell to my Power/Shout button, but every time I tried to cast it, it produced the “not enough mana” fizzling sound that longtime players are all-too familiar with, and didn’t do anything else when I tapped an Amiibo to my controller. I was full up on magic so that wasn’t the issue. Maybe I’m just an idiot and I’m missing something obvious, but unfortunately I wasn’t able to test Amiibo functionality for this review. Thankfully, you don’t have to scan Amiibo to get the Zelda gear. Climb to the summit of the Throat of the World and Link’s duds and equipment will be waiting there for you. 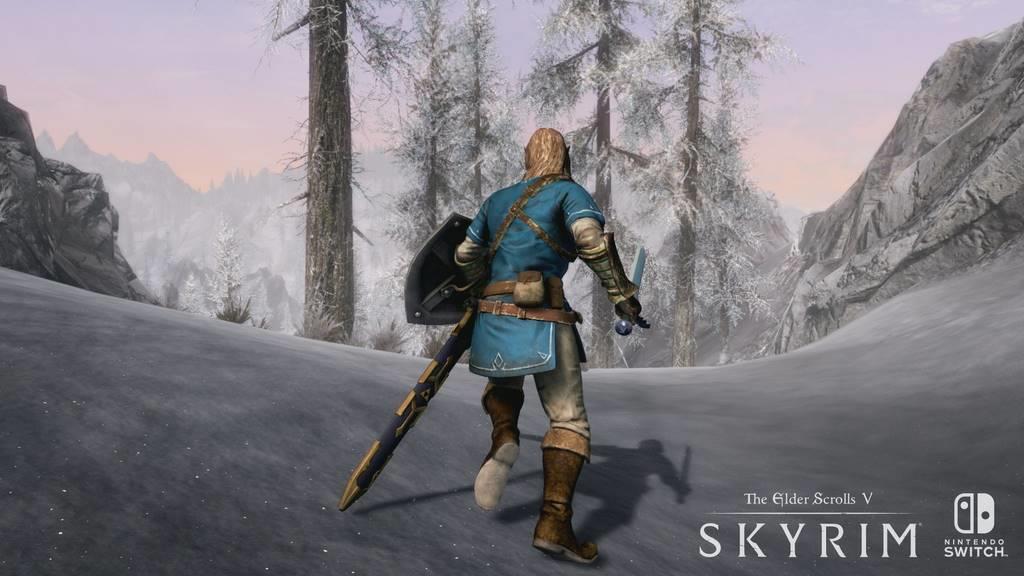 Outside of these Switch-exclusive goodies, Skyrim is the same old Skyrim you know and love. Its atmospheric world and setting still hold up pretty well six years on, Bethesda quirks and charming bugs notwithstanding. The branching quest system is extensive enough to distract you literally for years, and that’s not even touching on the hefty character customization and skill trees. If you want to put in the time and effort you can become a master warrior, mage, blacksmith, alchemist, thief, assassin and conversationalist all rolled into a single character.

And that’s not scratching the surface of the obsessive castle-building you can get up to in the Hearthfire DLC. While the base game allows you to buy a house in several of Skyrim’s major cities, Hearthfire lets you buy land and construct your own stronghold, as menacing or cozy as you like. The depth of customization and character-building is still frankly bonkers when you think about it. If I would describe this game to a Nintendo fan who had never played Skyrim, the best I could do is compare it to Zelda Breath of the Wild. However where Zelda focuses more on its world’s systems and the emergent gameplay that can arise, Skyrim leans heavily on its RPG elements. Now that they are both on Switch, both games complement each other beautifully and make a Switch library feel a lot more complete. 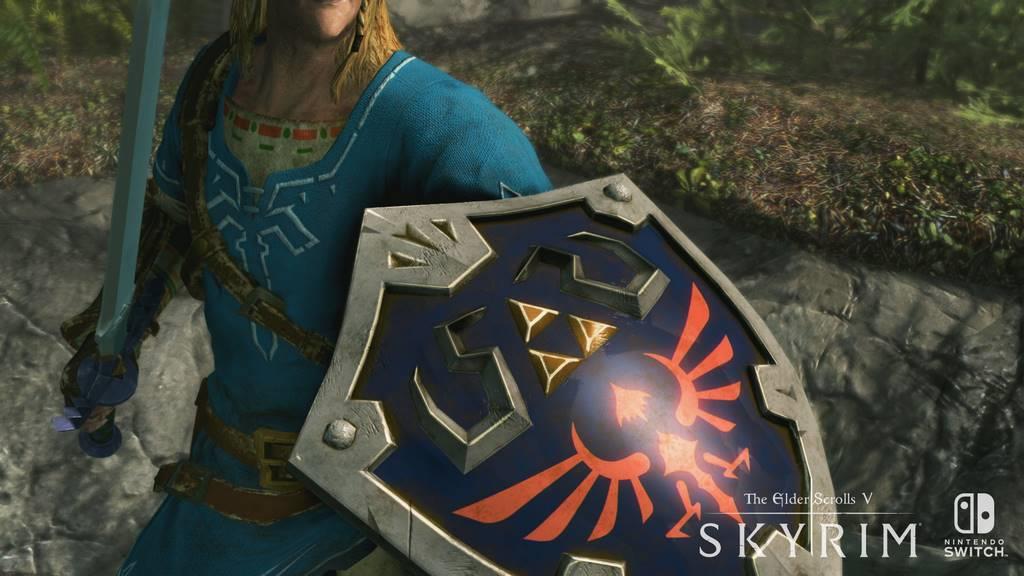 Naturally there is one big caveat to all this: Skyrim on Switch does not support mods at launch and it’s doubtful that it ever will. For some gamers, I know vanilla Skyrim is anathema. For some people, mods just make the game and I readily concede that Skyrim has some of the coolest and craziest mods ever developed. Some mods completely alter the nature of the game and it can be hard to go back after playing Skyrim Survival, or using one of the vastly improved and streamlined inventory mods. With all of that said, I still think Skyrim is worth a purchase on Switch.

I didn’t really get the whole point of this port until I was hanging out in a doctor’s waiting room playing it. This is one of the biggest, deepest games ever made and now I can take it wherever I go. I know Zelda and Mario Odyssey are huge too, but there’s just something different about playing portable Skyrim. It really drives the Nintendo Switch and its potential home. Skyrim has always been able to make hours disappear like magic. But now when you’re on a boring public transit commute, waiting for the dryer to finish at the laundromat, or just killing time until your habitually late friends show up to the bar, you don’t have to twiddle your thumbs or scroll through the same old social media on your phone.

Nintendo Switch and Skyrim can fill those moments of irritating adult responsibility tedium, where for whatever reason you have to cool your heels just long enough to get bored. It may seem trite and nerdy, but I think that’s pretty cool. And for me at least, it’s definitely worth another run through Skyrim.

Skyrim on Switch is the same excellent game it’s always been. It doesn’t support mods but the fact that such a massive, engrossing game is now portable is justification alone for another purchase.