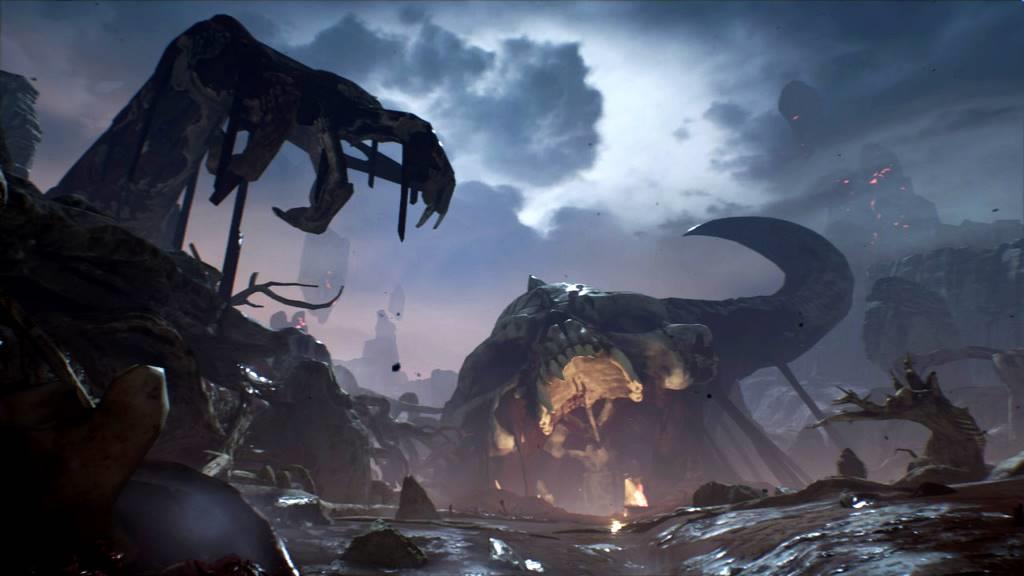 One of my fondest high school memories is walking out of Funcoland with a battered, secondhand copy of Doom for the Game Boy Advance. The 240x160 resolution made it look like the game was painted on bathroom tiles. The framerate could charitably be called “sub-optimal.” The level design was based on the aging Atari Jaguar port of Doom, which means the maps were drastically cut down and papered with muddy brown textures. The boss monsters were conspicuously absent. And to top it all off, due to Nintendo’s then-tedious censorship, all the demons bled a pea-soup green instead of a bloody crimson.

I didn’t care. I could play one of my favorite games of all time—a game that defined my childhood—anywhere I wanted to. A year later Doom 2 was ported to the GBA as well, and this time it was much more faithful to the level design and gameplay of the PC original (although the blood was still sadly green). I distinctly remember staggering out of the dental surgeon’s office after having my wisdom teeth pulled, tumbling into my dad’s car, and groggily pulling out my GPA SP so that Doom 2 could distract me from my bleeding gums.

Despite being cut down and fairly clunky, portable Doom was damn impressive back in 2001. It felt like a portent of things to come; staring at that grainy port of Doom running on a handheld made me feel like anything was indeed possible. That brings us full circle to today, when something equally impossible has come to pass: 2016’s Doom reboot, one of the most hardware-demanding games in recent memory, is running on the Nintendo Switch. And running quite well, I might add.

As a game about fighting the literal armies of Hell, Doom traditionally involves a lot of Satanic sacrifices. In all of the games, from the 1993 original up through Doom 2 and 3 and 64 and 2016, you’ll come across all sorts of pentagrams burned into the ground and exsanguinated corpses offered up to the forces of evil. This is appropriate, because I’m pretty sure developer Panic Button had to slaughter a goat over a copper basin and pledge some dark magic pact to Old Scratch in order to get Doom 2016 to function on Nintendo’s modest console/portable hybrid. In all seriousness, sacrifices have been made to Doom—it runs at 720p natively both docked and undocked and it’s capped at 30fps instead of the PC-standard 60—but I’ll go out on a limb and say Doom on Switch is far more playable and faithful to the PC version than the old GBA ports were to their respective originals.

Let’s be brutally honest: the Nintendo Switch is, by brass tacks, the worst console you could play Doom on. Doom’s visuals on Switch are inferior even to the lowest pre-sets you’d get on a PC. The variable resolution periodically dips below 720p, and heavy use of temporal antialiasing is used to compensate when the action gets too intense for the Switch’s modest Tegra X1 hardware. The resulting image can get rather muddy. Even then, you run into framerate chug that dips below 20fps on rare occasions. Hopefully Doom gets more optimization on Switch through patches, but if you’re buying Doom on Switch just for the home console experience, I’d advise you to consider PS4, Xbox One or better yet, join us in the sun on PC. 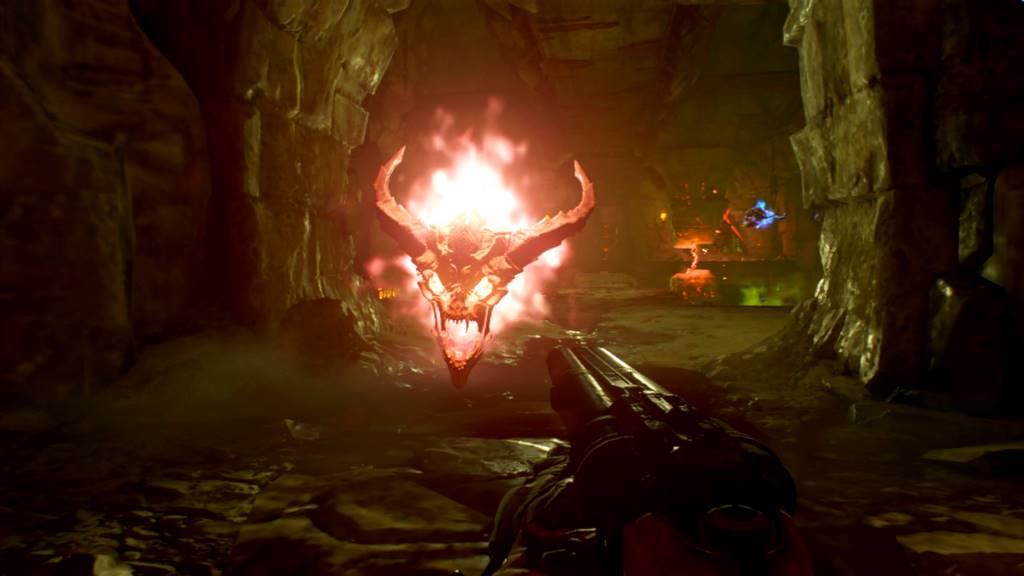 But Switch’s selling point isn’t that it’s only a home console. The kicker here is that you can take 2016’s Doom anywhere you want, and even with the concessions I’ve mentioned above, it still plays reasonably well and looks pretty damn good, especially on a portable screen. You get the same fantastic campaign with all the same monsters, boss battles and sequences from last year. Of particular note is that no cuts have been made to level design. Console ports of PC shooters usually have chopped up levels littered with unwelcome new load screens to compensate for a console’s much smaller RAM allotment, or worse, chunks of maps are drastically simplified or excised altogether. Not Doom on Switch; you’re playing the exact same campaign as the PC, PS4 and XBO versions. While texture resolution is significantly lower on Switch and some effects like HDR and depth of field are significantly blurrier, when the game is firing on all cylinders you don’t really notice, at least when playing in portable mode. This isn’t like the original Xbox port of Doom 3—another so-called “impossible” port—where the game was conspicuously missing bits of levels and certain scripted events. This is the full Doom experience, and you can toss it into your backpack or messenger bag.

Once I grew accustomed to the concessions that Panic Button made to get Doom running on Switch, I found my groove again. This is the exact same game I fell in love with last year. The peerless, rhythm-based, never-stop-moving combat that Id polished to near-perfection is intact and just as eminently playable as it was in 2016. The selection of demons and weapons is still keenly balanced between blasting away and moving in for that juicy glory kill, so that you’re always encouraged to forge ahead and take the fight to the enemy, as the embodiment of Hell’s reckoning that you are.

In between the combat, you can still focus on the game’s deep but intuitive upgrade trees to build out your armor, weapons and runes. Whether it’s an arcade-style rune trial, hunting out secrets to snag those last few gun upgrades, or finding that godlike tri-barreled attachment for the chaingun, everything in Doom pushes you inexorably to becoming a more efficient, terrifying demon-slaying force of nature. The level design dovetails with this beautifully; each map is packed with secrets that encourage curiosity and exploration. 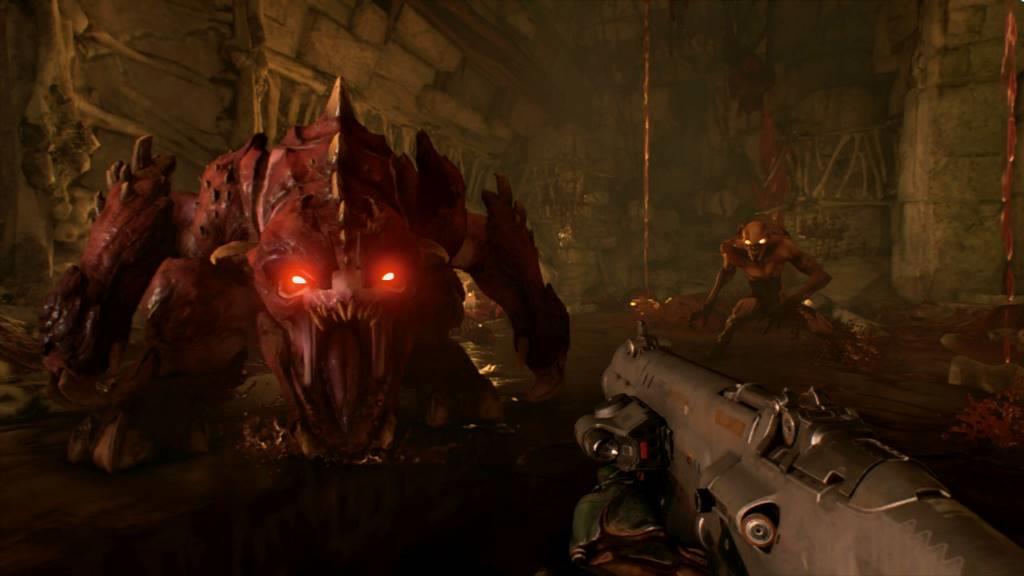 Once you’ve conquered the campaign—or before you’ve even started it, for that matter—you can also dive into the game’s arcade mode. This basically lets you pick any campaign level at will and play it as a score-attack run, where you juggle your arsenal against a much bigger horde of demons while keeping a combo meter filled. If you already played through the campaign on another platform and want to revisit it but with extra challenge and a new twist, arcade mode is a great way to come back to Doom if you’ve set it down for a while.

Doom on Switch also includes the original game’s multiplayer, with all the accompanying DLC content packs that were released over the course of about a year. I jumped into a few matches and naturally got my butt handed to me more than I’d like to admit, but I haven’t played Doom’s multiplayer much since the game’s PC release last May so I’m pretty rusty. I guess the most I can say about Doom multiplayer is that it feels a lot more…complete than it did at launch. The DLC packs really fleshed out what felt like a fairly bare-bones experience last May, by adding a much healthier selection of maps, weapons and demon runes. That said, Doom’s multiplayer still feels conflicted. It’s ostensibly an arena shooter like classic Id multiplayer FPS, but it ends up feeling a little bit like a slower Quake 3 littered with unnecessary modern garbage from Halo and Call of Duty. XP leveling and inane two-weapon loadouts just get in the way of what could be a much simpler, purer and more enjoyable arena shooter. This is Doom; add all the extra guns and maps you want, but for the love of God keep the mechanics simple and retro. 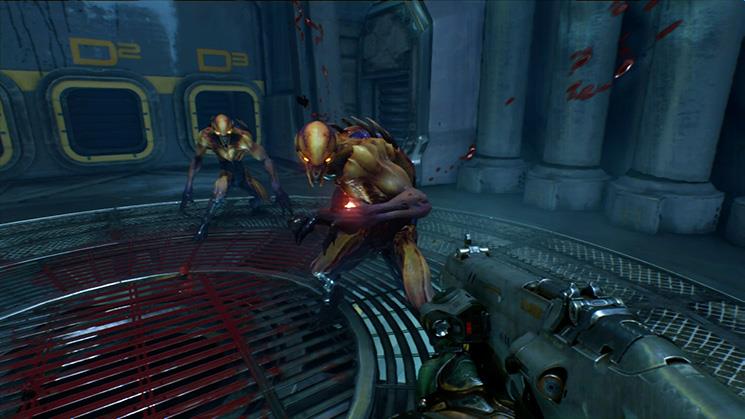 Unfortunately if you aren’t fond of the standard multiplayer, you won’t be able to make your own maps with all the weapons unlocked, and so on. The only feature Switch Doom is missing is Snapmap, the bespoke map editor Id included with the other versions. I don’t see it as a deal-breaker because Snapmap was a dynamic tool held back by its own limitations. Like the multiplayer, Snapmap has seen some huge content and feature updates since launch bit it’s still a tad cludgy and never met its full potential, in my personal opinion. It’s sad that Nintendo fans won’t be able to build or share their own custom levels—I have fond memories of swapping GameCube memory cards with friends to trade the Timesplitters 3 levels I lovingly constructed—but I understand why Panic Button omitted this feature. Getting Doom to run on Switch must have been a monumental ordeal in the first place; letting gamers craft their own levels beyond normal memory and complexity limits probably would have stressed the Switch hardware to the breaking point.

Snapmap notwithstanding, Doom is just as fantastic a package as it was over a year ago, and it’s pretty amazing that Panic Button was able to convert it to Switch more or less intact and eminently playable. As a home console game it’s so-so when compared to the previous versions, but as a portable experience, there’s really nothing out there like it. No phone, tablet or other dedicated portable can touch the performance and visuals of Doom on Switch. Even having played Zelda Breath of the Wild, Mario Odyssey and several other top-tier titles, the concept of the Nintendo Switch didn’t really “click” for me until last week. You don’t fully appreciate Switch until you’re sitting in a Target café, sipping coffee while playing Doom or Skyrim…but more on that later this week. Suffice to say playing portable Doom was an “aha!” moment for me that made me realize what a valuable piece of hardware Nintendo has with Switch. It’s fantastic to see Doom on the platform, and hopefully we can look forward to continued strong Switch support from Bethesda and Id going forward.

Doom on Nintendo Switch is visually pared back compared to other versions, but it’s still fast, addictive and gorgeous. Seeing it run on a portable is truly a sight to behold. Nintendo fans should not pass this one up.