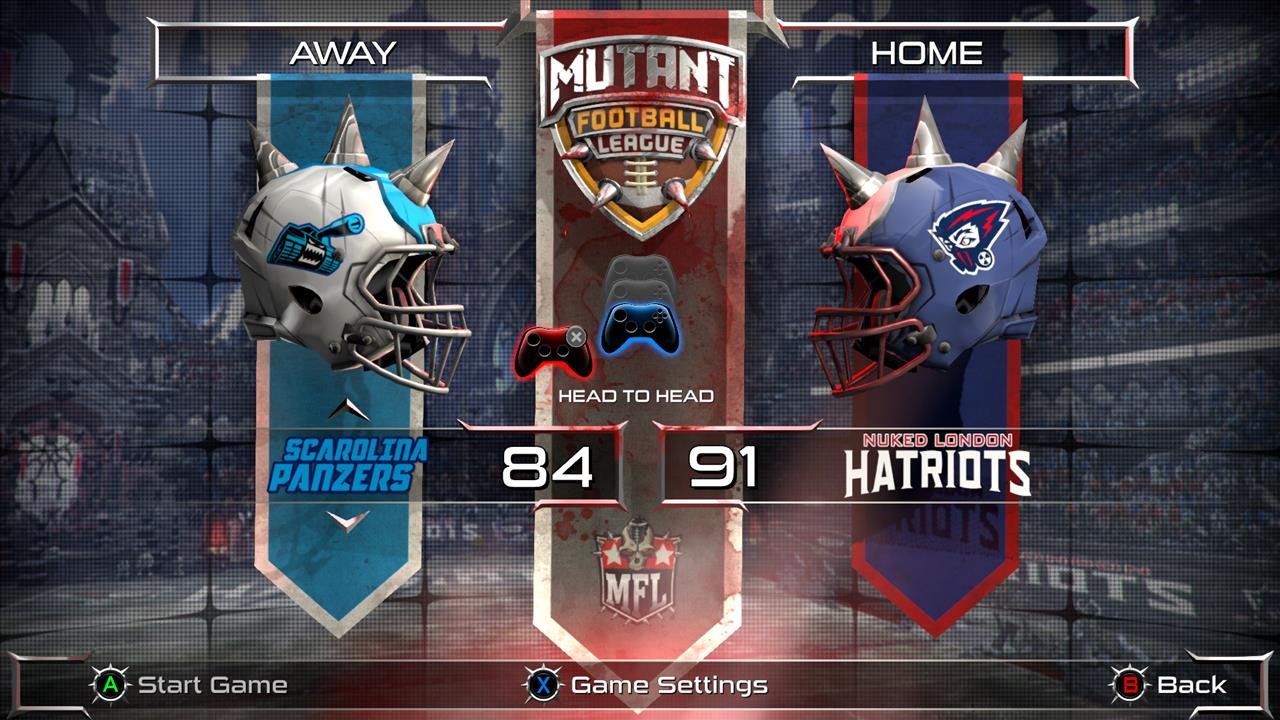 Written by Dave Gamble on 11/8/2017 for PC
More On: Mutant Football League

To be honest, it’s not the easiest time to talk about football. As with far too many things these days, it has become something that everyone has to take a position on, and not necessarily solely because of the sudden onset of polarizing political stances. As the risks of long-term health and injury become better known, more and more parents are deciding that their kids would be safer and better off playing a far less dangerous sport like soccer. As soccer is also far less interesting than football, this bodes poorly for folks such as myself that actually enjoy the sport of football, albeit with far fewer political ramifications.

Fortunately, there is a distinct difference between that type of football and what we will be talking about today. While the professionals in the National Football League induce friction between players and fans by taking a knee, the players in the Mutant Football League cause cringe-worthy physical mayhem by taking lives. “The what???” you ask? You read it correctly: we’re taking a look at the MFL, a football league comprised of all manner of mutants, freaks, skeletons, robots, and other disgusting creatures. Developed by Digital Dreams Entertainment, MFL is highly reminiscent of earlier arcade-style football games like NFL Blitz and the more obvious Sega Genesis Mutant League Football. Given the notable lack of decent PC-based football games available today, MFL has large shoes to fill but very few competitors on the PC platform. Madden hasn’t been around for ages and licensing restrictions may be keeping others from jumping in. That, and the far larger numbers of potential buyers for console versions, have combined to seemingly dissuad any other developers from jumping in.

At its essence, MFL is a 7-on-7 two- or four-player multiplayer game, with the two-player game being online and the four-player game restricted to local players. Naturally, there is also a single-player game if you would rather play against the AI. Personally, the latter is my preference for the combined reasons of 1) me personally being an extremely poor player, and 2) me simultaneously being easily offended by trash talk. I’m bad at it. I get it. No need to rub my nose in it. I get enough of that every time I load the dishwasher "incorrectly" at home. Which is every single time, if you’re keeping score.

Beyond the fundamentals of playing football by the rules, there are a lot of other things going on in the mutant league. Mutants aren’t known for their steadfast devotion to the tenets of good sportsmanship, any more than they are diligent followers of the rules of the game. As such, you should be prepared to deal with various types of dirty tricks, and when those fail, lots and lots and lots of extreme violence. It’s telling that the majority of the deliberate maiming occurs after the play has been blown…. dead. Often literally dead, when it comes to the players themselves. Players will be pummeled with brass knuckles, thrown to the ground with earth-shattering body slams, and once down, hammered with a series of rib-crushing kicks. Body parts go flying, pools of blood follow along in a fine mist, and more often than not, players expire right there on the field. It’s best to have a deep bench in the Mutant Football League. 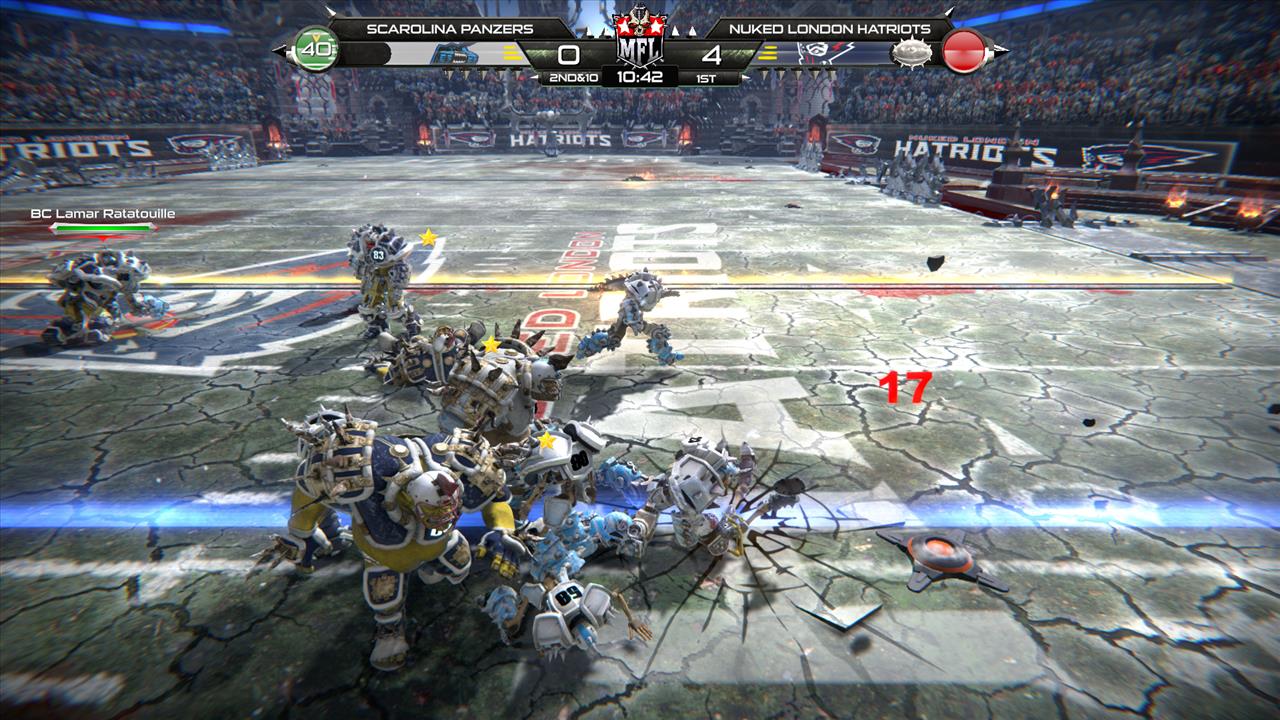 When it isn’t the opposing players disrupting your plays, it’s the actual playing fields that do it. I starkly remember what would have been my most successful screen pass ever: I hit my guy over on the left sideline and he had no one between him and the end zone. Note that ‘no one’ is not the same as ‘nothing.’ Just as I was getting ready to celebrate the TD, my guy ran into a land mine. No stiff arm or exquisitely timed spin move is going to get your player past a land mine. Kaboom. There went my score. Had it not been a land mine, it could just as easily been a toxic moat, a fire pit, a field of spikes, or a buzz saw that runs from right to left and back again across the field. It has a tendency to slice right through your blockers and your runner as well. 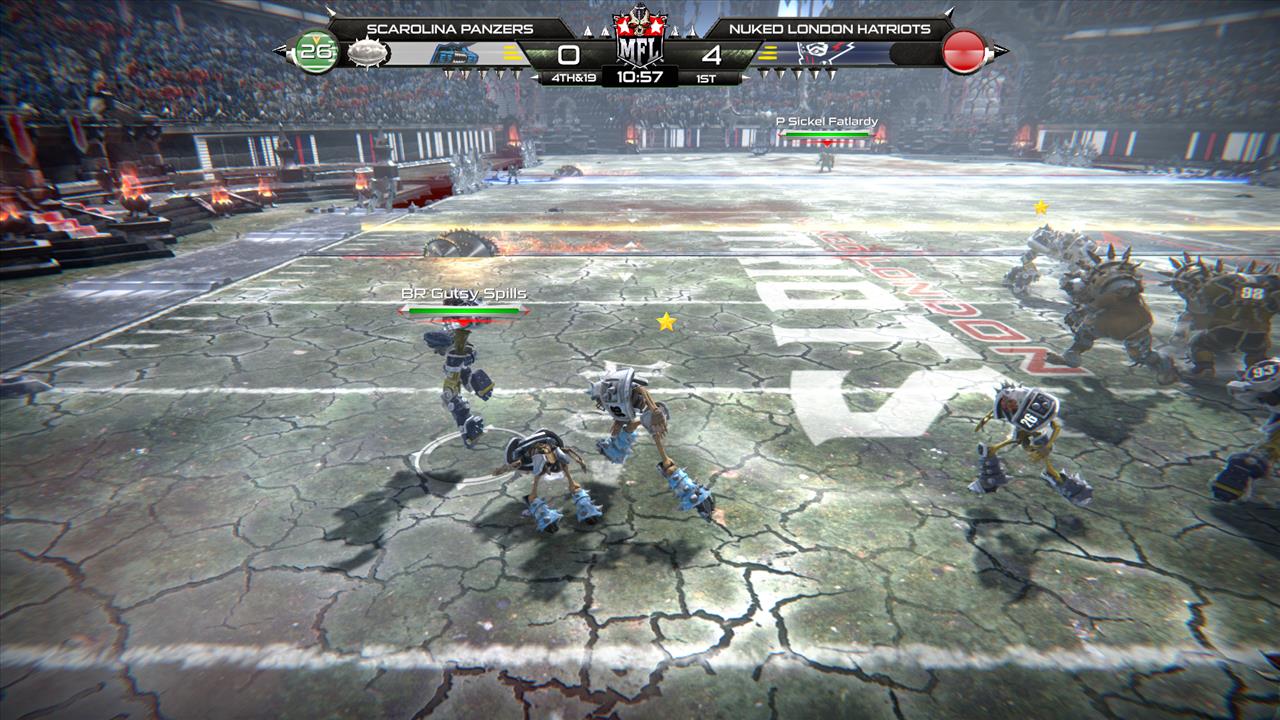 To be honest, I was not amused by the untimely end of that play. In fact, to be even more honest, it didn’t take me long after that incident to dive into the game settings and disable dirty tricks, tone down the violence to ‘moderate injury’ level, and generally tame down the game. I have enough trouble beating the worst team in the league without all of that stuff; no reason to make it harder.

I did not turn off the commentary, though. While it does start to repeat eventually, every now and then a funny/clever comment would come out even after I had resigned myself to having heard them all. These comments can be very profane, and there is a setting to clean it up a bit, but I’m a lot more receptive to puns and jokes in the commentary than I am to things that just make the game harder for me to play. It's a personal preference, and I truly appreciate a game that lets me decide what I want to put up with and what I would rather do without.

So, about that. If you were to strip away all of the mutant malarkey, you would be left with what a pretty good football game. As I mentioned, I do enjoy the game of football, but being slight of build (understatement there - I’m scrawny) I never had the opportunity to actually play. I get the basics, and I’m fairly good at broad categories of play calling (run defense vs. pass coverage, shotgun formation vs. every other formation that is guaranteed to lose yards, and special teams plays) but the distinction between more granular formations escapes me. It is for that reason that I prefer a slightly simplified playbook over, say, the Madden collection of dozens and dozens of plays. MFL has maybe five different offensive formations, each having 5 or 6 different plays to call in each. Each play is helpfully labelled as a ‘run’ play or a ‘pass’ play. 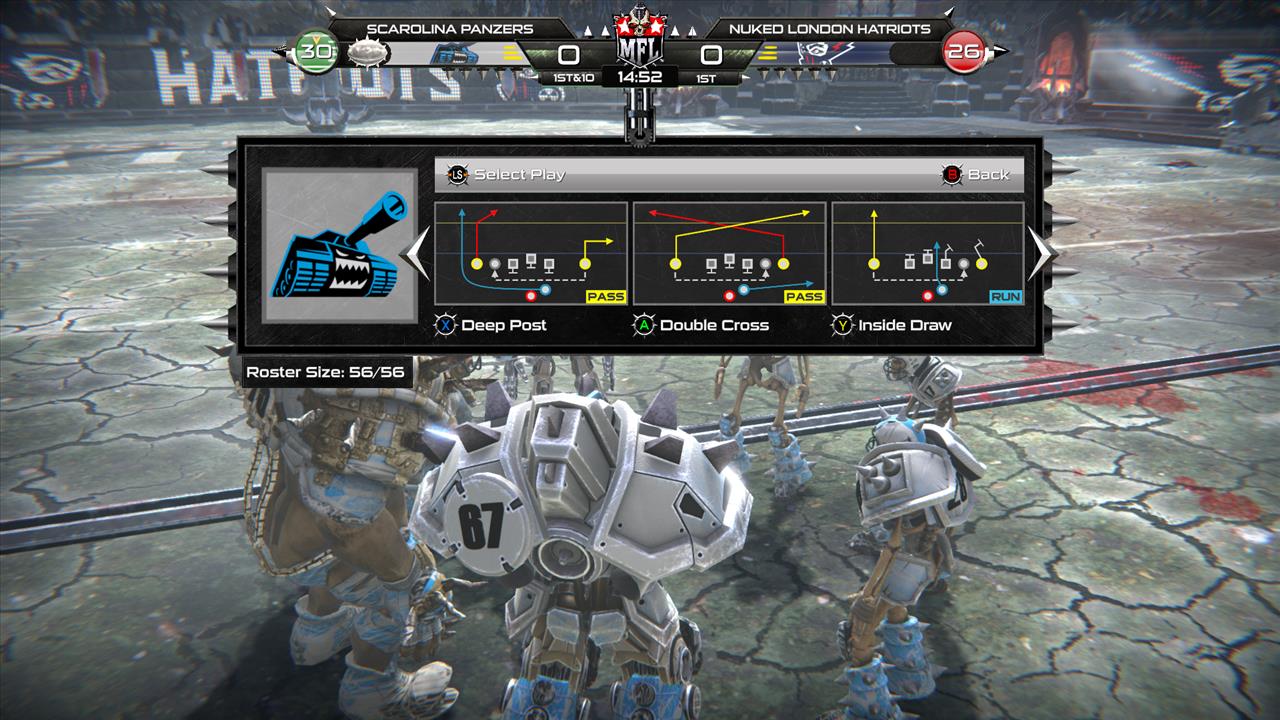 I’m even worse at defense, so I simply choose between a blitz/run defense and a pass coverage defence. I don’t even bother to control the defensive player; things work out better if I just sit back and let my own AI make all of the defensive moves. 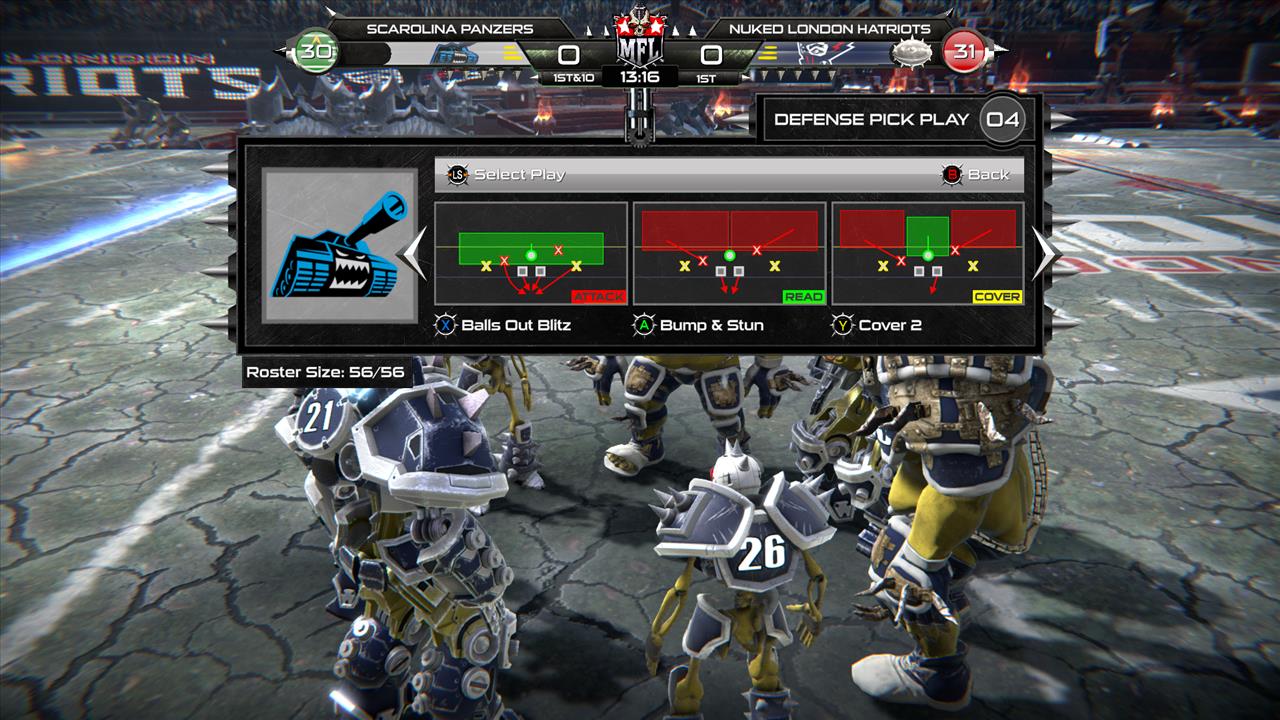 What helps to really make the game approachable to less sophisticated players is a difficulty range that runs from "Newbie" to "All Start Masochist" and a game speed setting that runs from slower to normal to fast to fastest. I played Rookie at the ‘slower’ game speed for the first few games just to get a handle on things before bumping up the difficulty. That worked out well. 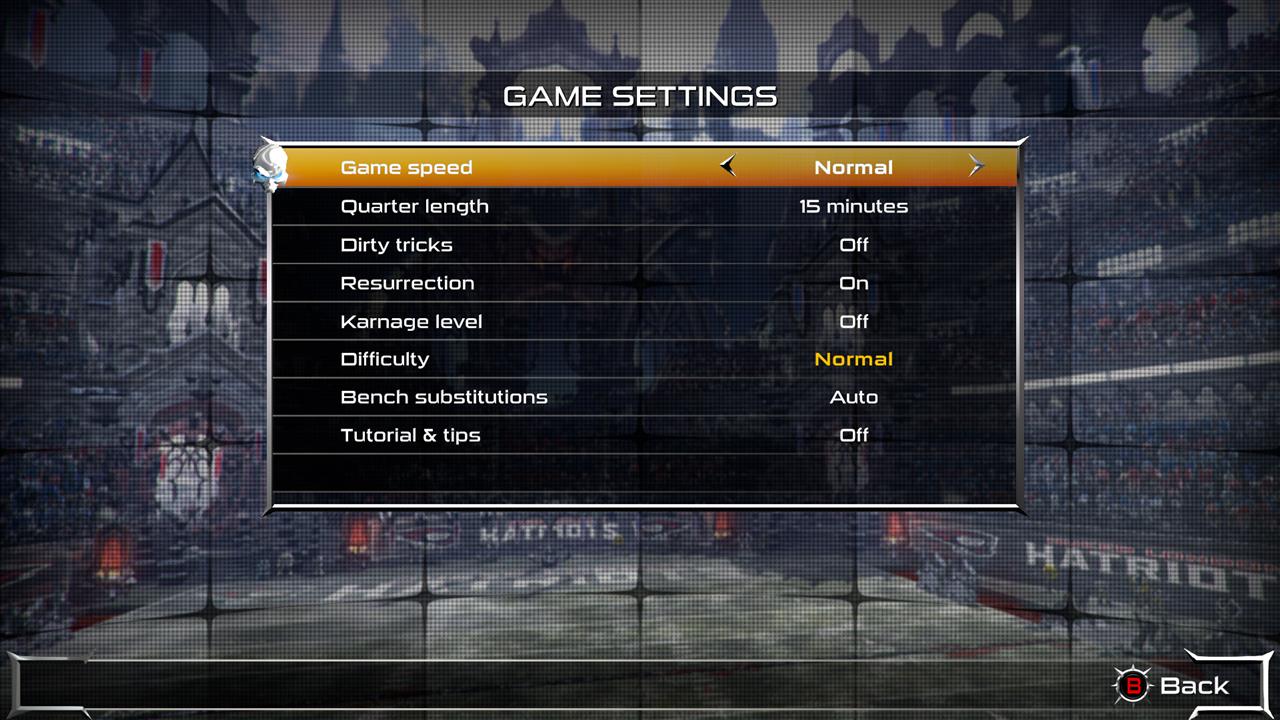 The controls at this stage of development are currently limited to a game controller, and for all I know may stay that way. I used an Xbox controller and found it to be quite adequate. In fact, it seemed quite familiar. I was able to use a stiff arm, make a spin move, dive for the end zone, and slide just as comfortably as if I was playing a Madden game. On defense, of course, I just spectated.

Also on the plus side, there is pretty good variety in the capabilities of the individual teams. Some have excellent quarterbacks and receivers, while others are best suited to a predominantly running game. Some are more or less good at both, but exceptional in neither. There is currently a fairly broad collection of 18 teams, although it’s not out of the bounds of reality to assume that others may be added at some point. While there is likely to be a category of player that would prefer to have actual, licensed names for the players and the venues, I was fine with team names like the Deadlanta Vultures, Grim Bay Attackers, and the New Yuck Tyrants. You will be playing as Bomb Shady if you select the Nuked London Hatriots, or Wham Neuton if you choose Scarolina Panzers.

If you can look past that, though, this is likely to be the best football game available on the PC today. It is surprisingly well polished and has enough depth to be approachable to newer players and presumably challenging enough to keep more experienced players entertained. Should the game prove too easy for top-tier players, the difficulty level can easily be raised simply by turning up the macabre settings. Either way, there’s something for everyone in this game and any personal differences/appendages can and will be left on the field, where they belong.

Yes, it's vulgar, it's crude, and it's often profane. Be that as it may, Mutant Football League is probably the best football game available on the PC today.