Finally. Egypt. Ancient Egypt. Well, not Ancient Egypt. It’s the Egypt of Classical Antiquity. The one where Cleopatra was doing her thing. The one just before Rome came up in the place with its Pax Romana and its library burnings. That’s the Egypt of Assassin’s Creed Origins. This is where the Brotherhood of Assassins begins. This, too, is where a prototype of the Templars begins.

But I came here to slide down some pyramids. To take a chip out of the ol’ Sphinx’s nose. To raise my voice above a whisper in the Library at Alexandria. Real rebel stuff. And I’m going to do all of this with main dude, Bayek, and his eagle, Senu.

The Assassin’s Creed conceit is that it is: a modern day sci-fi game where snarky techno-archaeologists “time travel” through the DNA-encoded memories of their Assassin ancestors. It’s a uniquely conceived idea that’s taken the series everywhere. From Moscow to Manhattan. From Jerusalem to Jamaica. From the Vatican City to the Forbidden City. And with Origins, it goes to the Ptolemaic Kingdom on a timeline now extending back to 40 or 50 BC.

I like Assassin’s Creed Origins more and more, the more I play it. But it just keeps growing. It just keeps opening its sandy mouth bigger and bigger. After a dozen hours, there’s no foreseeable end. I mean, there’s gotta be one, right? But the sandbox gameplay of Assassin’s Creed has blown past the series’ critical mass. There’s no shaking Origins’ confidence in its status as a AAA open world experience. There are even hints of The Witcher 3-level world building here. Where you can see arguably the most monumental man-made architecture ever built in the Pyramids of Giza. Yet the nuts and bolts of everyday life can be found in the dusty streets of urban and rural life. Cats sunning themselves in the markets. Floral chains draped around roadside statues. The looms with their clothing lines, the armorers with their hammers clanking, the stables with their line of horses and camels. Endless pedestrians, too, of course. Just with barely enough sense to get out of the way when you’re barreling down the middle of a wide Alexandrian avenue or a narrow village pocket.

This is a time when every home is susceptible to burning by Roman invaders, and when every temple rises up to meet heaven. From ashes or from burned animal offerings, the smoke goes up everywhere in Egypt.

This is where you come in, Bayek. You are the last Medjay, the last of an elite police force that looked after the Pharaoh’s interests. Five proto-Templars — those are the bad guys — are the force behind the throne. Cleopatra doesn’t have the throne right now. It’s her little brother, Ptolemy XIII, the Boy-King. The bad guys are pulling his strings. You need to get rid of them.

You do this as loudly or as quietly as you want. Way back in the original Assassin’s Creed, “crowd stealth” was the thing. Blend in with this group of citizens, or that group of monks. Blend in by taking a seat on this bench, or chilling in a haystack. Combat was wonky. And challenging (because it was wonky). Because Assassin’s Creed always wanted you to be something like a Middle Eastern ninja.

Across a dozen or so games over a decade, that priority has shifted. In Origins, for all its size, it’s thinned out a lot of what cluttered previous Assassin’s Creeds. You can crouch in some bushes and manage your enemies’ line of sight, but all that crowd stealthing is long gone. There’s no button to sit on a bench between two bystanders. Silent assassinations pack some wallop, and it’s just as easy to set the place on fire than it is to gently throw sleep darts at the guards. Unless I’m knowingly outleveled by enemies, I’ve polished off a dozen guards (on accident) and went on my merry way. 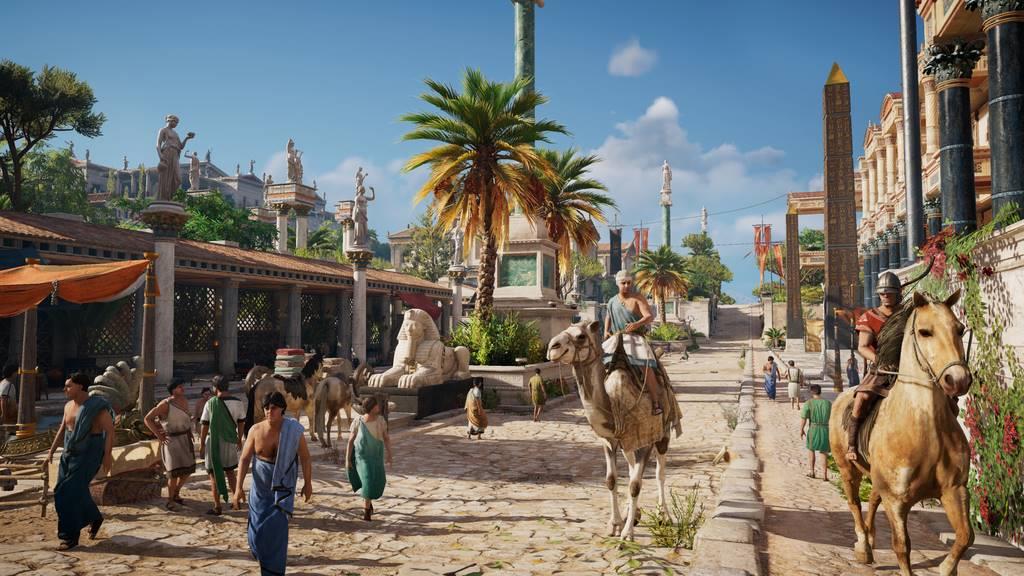 Ubisoft overhauled combat. There’s talk of hitboxes and weapon weights. There’s the awkward button rearrangement that seems to happen with every other Assassin’s Creed anyway. So, Origins carries on the series’ mild identity crisis. Is it a stealth-action game? Is it action-stealth? Is it a brawler, a beat ‘em up, a platformer? It’s all those things, just with the sliders adjusted a little to the left or a little to the right. It’s an open world, sure, but there’s only one way to deal with the bad guys: dead ‘em.

Bandits are a never-ending problem in Origins. Honest folks make something with their hands, while dishonest folks come along and take it. Me being an equalizer, of sorts, I put the goods back into the original owners’ hands. I get my instructions. The bandits are southwest of town, yadda yadda. I whistle for my camel. It comes toppling over a nearby wall. Such a trusty steed. Hopping on, it grunts, I click my tongue, and we’re off at a healthy trot past the palm-lined roads and into the moonlit sand dunes. I press one button that runs my camel toward the main road. I press a second button that heads specifically for my waypoint, the bandit camp southwest of town, yadda yadda. It’s a clear night. Lots of stars out.

A pack of hyenas decide to take a bite out of my camel. Drawing my nasty curved blade from camelback, I trot my camel in a circle and take swings at the hyenas. They yelp a lot and die, blood flashing from their necks. Without even dismounting, I skin the hyenas for furs and proceed. One button to autopilot me back onto a main road, another button to autopilot me to my waypoint. Why isn’t all animal travel this convenient in video games with animal travel? This is how easy it should’ve always been.

Nearing the bandit camp, I switch to Senu, my eagle, who’s always circling right above me wherever I go. I’m now the eagle. Wings spread, I soar ahead to the bandit camp. Catching a thermal, I hover way above a bandit campfire. I start tagging enemies, outlining them for Bayek back on the camel. A couple bandits sleep around a campfire. A third stands guard at a cave entrance. This should be easy. With the bandits marked, my vision swoops back to Bayek.

Dismounting, I take a high approach to the bandit camp. I crouch and shuffle from bush to bush, cover to cover. The bandits are clueless.I’m perched above the bandit camp now. Closer to the edge, I leap down on the one guard that’s awake. I put that guard out of commission. The other two still sleep soundly around the campfire. It’s dark, but there’s enough moonlight for me to navigate closer. I stomp on one of the sleeping bandits. He’s not dead, but he’s not shouting for help, and he’s effectively taken out of the fight. I get creative on the last one. I head back up to an elevated position. They’re both on a circle of hay around the campfire. I shoot an arrow that shatters a vase full of oil nearby. Oil spills out over the hay. I grab a fire bomb. I toss it into the oil. The oil lights on fire. The circle of hay further lights on fire. The bandit that was taken out of the fight is now on fire. The bandit that was still sleeping is now awake, but also on fire. He’s running around screaming. In a few seconds, both are blackened and dead. 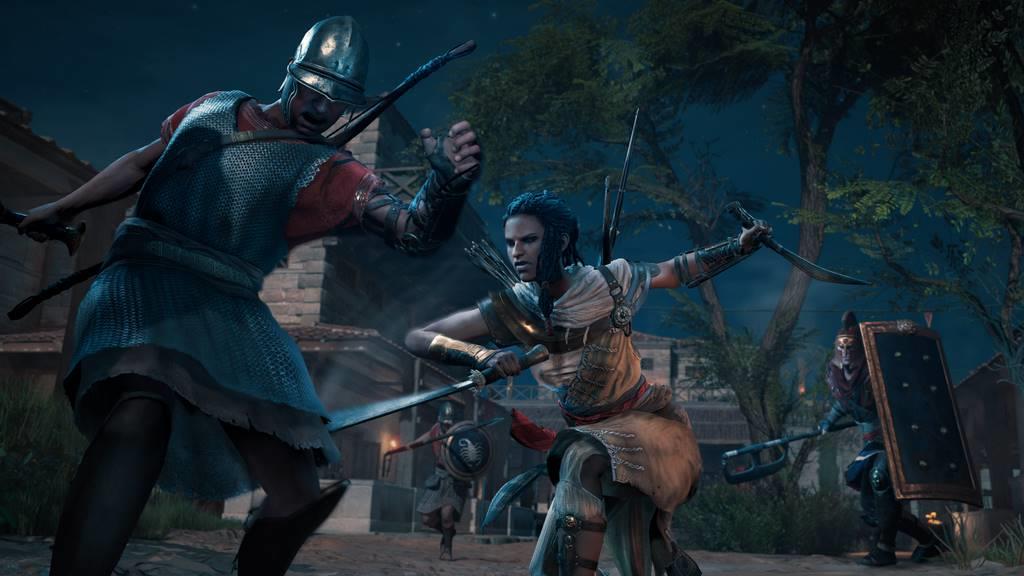 I hop back down and regain the goods that the bandits stole. I also loot a few coins here and there for my troubles. I whistle for my camel. It comes bounding over the cliffside. I hop on and put my arms up to shield my face. A sandstorm is coming in, just as the sun is coming up. In a few seconds, the air is thick and impenetrable. Sand blows around me in every direction. All I can see is a golden fog of sand and dust. Bayek says, “I must not lose my bearings.” I try to switch to my eagle, Senu, but Senu “isn’t available” during storms. Makes sense. But I simply open the map, and set up a waypoint back in town. I press one button that autopilots my camel toward the main road. I press a second button that autopilots my camel toward my waypoint. Mission just about accomplished. Again, why has it taken until 2017 to make animal travel this effective?

Then, after the opening chapter in the land of Siwa, it drops me into present day. The present-day aspects of Assassin’s Creed are always exciting at first. But only at first. The entire premise behind Assassin’s Creed is that there’s a contemporary sci-fi element to the whole thing. It makes the historical end of things that much more exciting. That is, until I get to the modern-day scenes. And then I’m bored. I’m instantly inundated with hundreds of words written across various pamphlets and handouts, all typed up in varying degrees of corporate speak and legalese. It’s an unnecessary slowdown and has me dying to just get back into the Animus. Employee handbooks tend to do that to me. There are at least Easter egg tie-ins with other Ubisoft games. And there’s some much needed info on an old series character that’s needed some follow-up. We’re heading into spoiler territory here, so I’ll ease up.

But Origins, for all its expanse, it best at the little details. Like the way Bayek glues himself to each step up to a temple. Or how he holds his hand out to brush at some waist-high flowers. Or how Senu, my eagle, climbs and declines at the exact angle of the Pyramids at Giza. It’s in the extreme side-eyed looks the populace gives me when I’m doing my parkour thing around the streets. Or in the Mad Maxian thickness of the storms that blow across the tsunami-height sand dunes.

Origins doesn't feel like the sweeping epic it should be. But it's good enough. Good enough to have the series back. Good enough to get lost in an Ancient Egyptian Wikipedia rabbit hole during my off time. And good enough just to slide down some pyramids, stab some bad guys, then ride off into the desert on my trusty camel with eagle in tow. Welcome back, Assassin's Creed. You didn't give us enough time to miss you that much. But it's always nice to see new places with you.

Origins was worth taking the year off. Egypt will be hard to top as a location. The series' dry, ironic, corporate sense of humor is still dull. But nobody can beat Assassin’s Creed’s architectural history lessons, even if you’re still just stabbing folks and jumping out the window while you’re sightseeing the entire timeline.