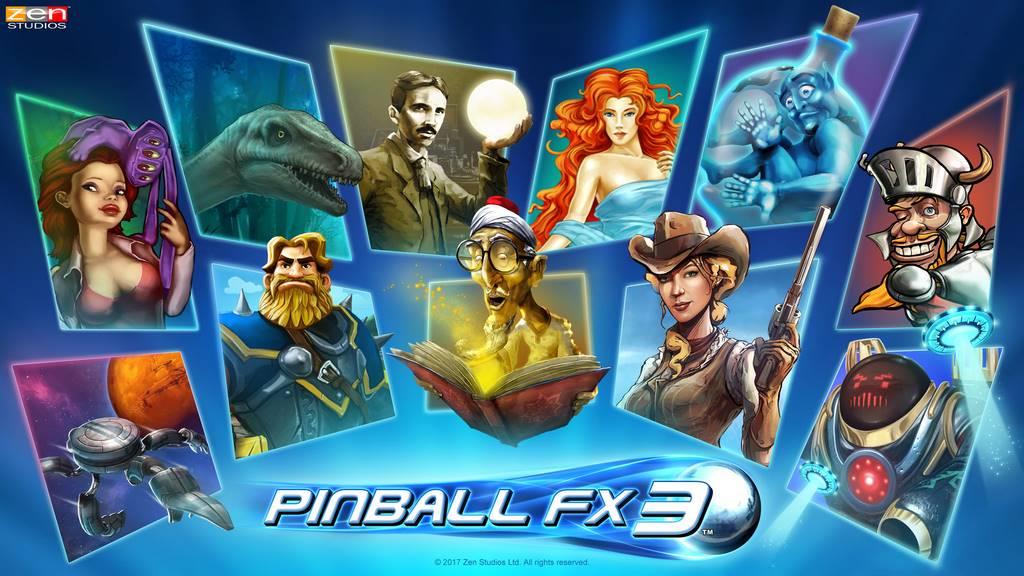 As someone who plays video games as an adult, I am someone who has actually played a LOT of pinball games. I have been an arcade freak for the better part of my childhood and pinball is a solid part of that. Now from the get-go, I’ve probably amassed 15 minutes of electronic pinball in my life and cannot remember the last time I actually played. It is not on my list of games to watch for, nor is it something I need to get the minute it comes out. That said, I also like a new challenge or at least a new experience.

When you enter the game, you notice that the title/menu screen has been simplified, brightened and is easier to maneuver than FX2. There is a cutout woman that pops on the screen and gives you the option to continue your previous round, or any new info you need. I can’t say that a no-named, super-hero dressed, non-moving woman is overly creative, but it does get your attention to whatever she has to say. From there it is a choice on what type of game you wish to play.

The single player is straight forward and works well. You enter the table-top list and pick which one you want to work with. Before you go further, you can opt to play challenges. These are special games for the board you picked that challenge players to finish the game under certain terms like 1-ball, 5-minute, and survival. If you by-pass the challenges, you then have a choice of Regular, Classic (without powers/upgrades), Hotseat (4-player local), or Practice. The regular is the best for me since I like the upgrades and powers. These range from a plus percent to bumper points, to a distance bonus for ball travel. There are also wizard powers like slow-motion, and rewind. There are a total of 6 upgrade slots and 3 wizard powers that all have to be unlocked by achieving game status of some kind (level, score, challenge).

Matchup is a place to invite other players and advance in leagues. The more tables you play on, the higher diversity score you’ll get. Seasons last a number of days and the highest score wins. There are a lot of reasons why I didn’t partake, but more on that later.

Tournaments are a place where groups of players go to compete on the same board. It is like winning your own fantasy league for football as your score means nothing to another tournament’s top score. Still, it is a good place where you and your buddies can meet to throw down.

There are also Quick Play and News tiles that give you the option to get right into a game – with tutorial, and news about upcoming tournaments or new things for the game. It is a very nice, colorful, easy to read setup and it makes it easy to get to it. 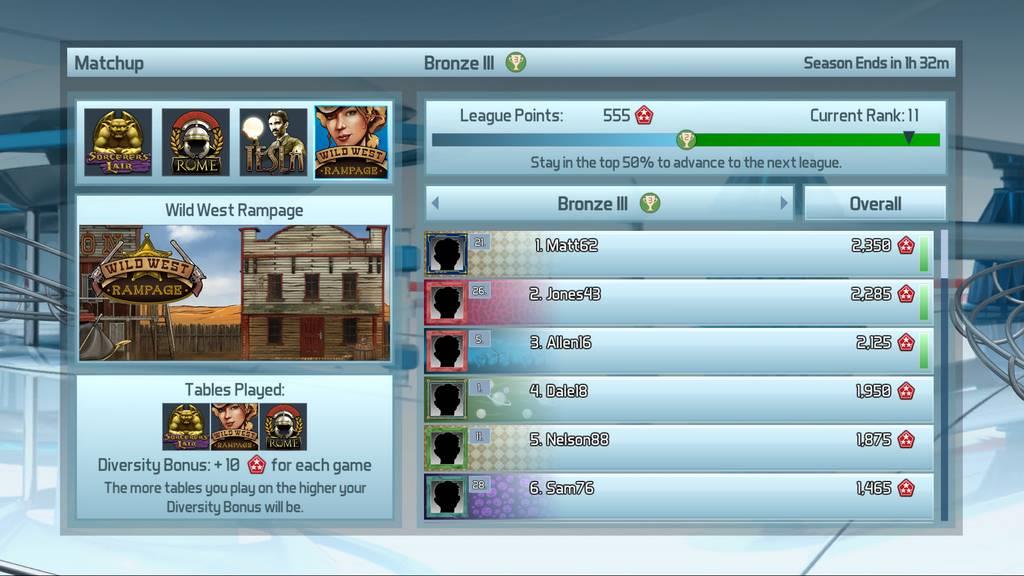 Now to the actual gameplay. The game tables are very inventive, with spins loops and mini-happenings all over the place. There are the typical pinball fares – flippers, bumpers, captive holes, jackpots, and multi-ball. These are all very well done and make for an enjoyable time. It’s in the other graphic add-ons that Pinball FX3 shines.  I will use Back to the Future as the example for this as it is a fun table. There is a giant flux-capacitor in the center and that is surrounded by Doc, Marty, wiring, tires, the Delorean, and other Hill Valley paraphernalia. There are Hill Valley signs to knock over; the flux-capacitor is a ball hold with sparks a-plenty; there is a time destination with dates from the three movies, and finally – attached to the plunger – is the time destination device from inside the Delorean. After ogling at the BTTF candy, you hear the icing on the cake when Doc and Marty spout lines from the movie that coincides with the date you chose. “Woah, this is heavy”, and “What the hell is a jigawatt?” make you smile as you ricochet the ball all over the place.

Like the movie plot, however, this game has some holes in it as well. For starters, even though the core game is free, there are a bunch of cost in this undertaking. There are only 4 starting tables – Back to the Future, E.T., Jaws, and Sorcerer’s Lair (generic). Not only is 4 out of 68 a lousy starting number, but a bunch of tables are needed to get into some areas of the game (tournament, etc). The extra tables are expensive as well. Lets say you are a die-hard Star Wars fan (like myself), you would have to shell out $41.95 to get all the Star Wars tables – and that is only 14 out of the 68 tables. As a day one game, you’d spend more than $125.00 for all of the content. I realize this is a game where you can wait for sales, but as a day one game, it is a bit expensive to buy all of the content for the game. 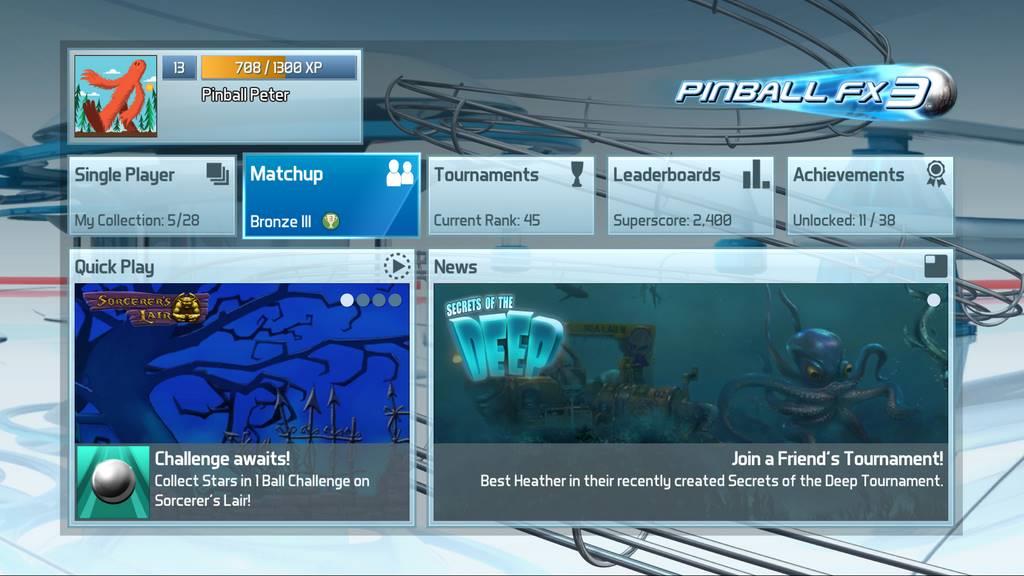 Another problem with the game is that is so simplistic, it actually is a bit dull. The voice-over woman is very ho-hum with the exact same cadence for every menu. The noises for the menu and selections sound like an app, and the music in the background is a horrible, repetitive wave file that is nothing but annoying. There is also a lack of excitement for the actual pinball rounds as well. I understand this is Pinball and not Battlefield, but there is little shock and awe as you play. On top of that, the shock and awe that is there, wears off relatively fast so that the table becomes repetitive quickly (how many times can you hear "What the hell is a jigawatt?" before it gets annoying. That isn’t to say playing on is a chore, but you must go in with the idea that score is the focus, not the table’s entertainment value.

When you get to the point of spending some $20 for a few tables and have beat your friends into submission, you realize the game does have some charm to it.  And, after all, you weren’t saving the world in this game, anyways. I guess my experience with the crashing and banging of a real machine is stymied against the non-shock visual from the video game, but it is a well oiled... game nonetheless.

Pinball FX3 is a game that makes no excuses for being a tried-and-true game with the standard jackpot fix that arcade junkies need. The “free-ness” wears off quickly and there will be trepidation for spending “X” amounts of money on multiple boards, but the challenges and rivalries will earn a bunch of those coins back. My take on Pinball FX3 is to wait for the prices to plummet on the extra boards. That infusion of 30 boards or more will make the game shine… like the quarters you once put into the machines.