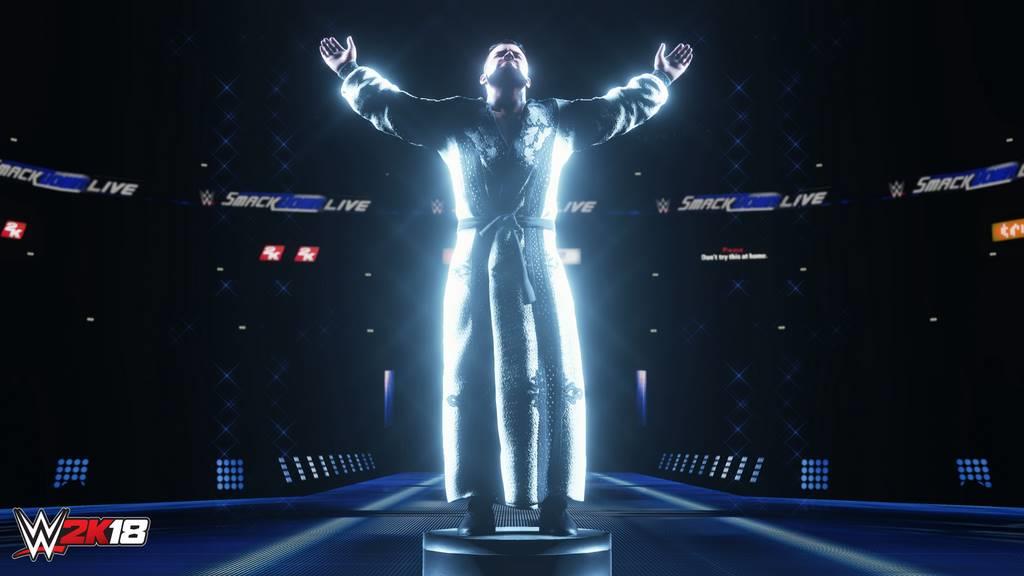 For the past couple of years I’ve had the opportunity to fly out to San Francisco, CA courtesy of 2K Games to check out the newest addition to the WWE 2K series.  This year I was given the chance to once again fly out courtesy of 2K Games (flight and hotel paid for by 2K) to check out WWE 2K18, but this time things were different.  Instead of heading west to San Francisco, we headed North-East a bit to WWE’s backyard…sort of.  This year’s event took place in a place where I’m sure most fans would love to check out if the opportunity arose: the WWE Archives in Norwalk, CT.  Before I get too into things, this preview will be split into two parts.  This first part will cover most of the things that we experienced during the trip while the second part will go a bit in depth with the creation suite.  Another quick note is that this was played on a PS4 Pro so anything control-related will use the PS4’s buttons.

Before I get too deep into some of the more major changes and additions to WWE 2K18, there were a few minor things to note with the gameplay.  From what I experienced most of the mechanics from 2K17 were left mostly unchanged.  Sadly I didn’t get much of a chance to work with cage and Hell in a Cell matches to see how those were this year, but I watched a bit of a ladder match another person was playing and that match-type seems mostly unchanged, at least in regards to grabbing the belt/briefcase.  There are still the two types of submission systems, using the wheel or rapidly pressing the correct button, and the wheel feels it might be a bit more responsive than last years which was already quite the improvement over 2K16.  The kickout meter though I felt like there might have been a bit of a delay with it.  There were times where I know I pressed the button in time and yet the meter stopped just past the point of kicking out.  The major mechanic change this year though is that you can now pickup and carry an opponent using a combination of L1, R1, and the right stick.  This lets you also potentially slam your opponent into a corner, the ring post, or with the right skills just throw him out of the ring entirely.  If you’re the one being carried you can rapidly press the circle button to possibly escape the hold. 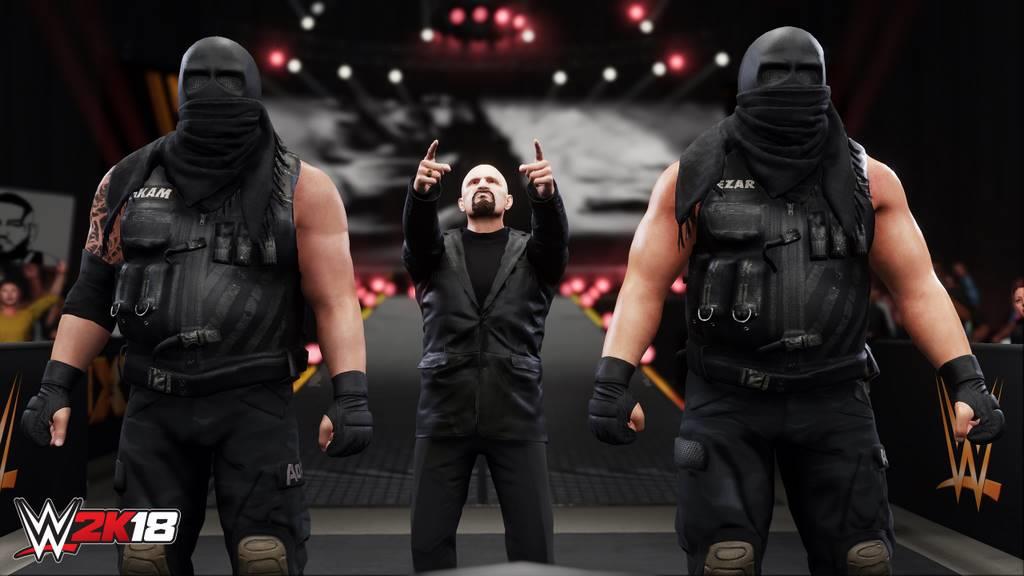 That’s about all I saw in terms of mechanics, so let’s dive into some gameplay changes and one of the ones I like is the ability to walk around backstage.  Now I don’t just mean during matches, though that has been expanded on a bit.  I tended to enjoy diving off of a semi-truck and completely missing my target.  You can now walk around in kind of a third person mode during the career mode.  After you start the current show you can walk around and interact with various people before actually starting your match.  I didn’t experiment a lot with this as I had a lot I wanted to check out, but this could have some interesting implications.  After creating a character and getting through the first bit of my training at the Performance Center, coach Bloom recommended I walk around and chat with a few people.  During these chats you may have the opportunity to pick your responses to what the other superstars say and I’d almost bet that this could have future implications.  For instance, I struck up conversations with Rezar of The Authors of Pain and Eric Young of SAnitY and both times I chose positive answers or reinforced them that they’ll do pretty good in their matches.  If I had kept going through NXT I wouldn’t be surprised if I became the next member of SAnitY or ended up with Paul Ellering as my manager.

Beyond that, I didn’t notice too many other differences with Career Mode from last year.  I’m not sure if you can advance to the main roster right away as you get put in a match with Baron Corbin and…well, needless to say the match ended very quickly with my defeat, so I’m not sure what would have happened if I had won.  Training is still the same and the promo system returns.  However, there is still one thing that I really can’t figure out why it hasn’t been included other than maybe there was not enough room in the game to put it, and that’s a women’s career mode.  A couple of games ago when the extent of the NXT Women’s Division was the Four Horsewomen and maybe Asuka, I could understand.  However, this year we have basically most of the NXT Women’s Division including Asuka, Ember Moon, Peyton Royce, Billie Kay, and a couple of others.  Plus you have plenty of women on the main roster.  Maybe there’s just not that many people interested in chasing after the NXT, Raw, or Smackdown Women’s Championship, but having the option would have been nice. 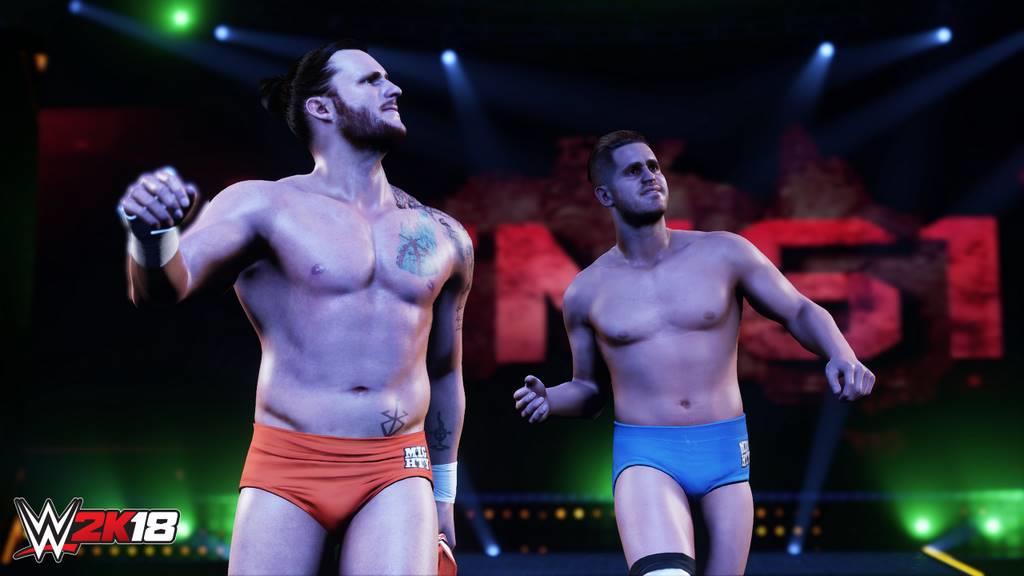 On the flip side of the career mode is the return of Universe Mode.  This works roughly the same as it has in recent years where you have your various shows setup and you can either simulate a match or show, or play the matches and control whichever superstar you want.  I will say though that the choice of matches can be a bit strange when the game generates the universe.  Either person to the side of me had matches that made sense such as Seth Rollins and Dean Ambrose vs. Sheamus and Cesaro (by the way, Sheamus and Cesaro’s entrance looks fantastic this year).  Meanwhile I had an awesome triple threat match with Neville vs. Akira Tozawa vs….Triple H, because clearly Triple H is a member of the Cruiserweight Division and competes regularly on 205 Live.  Beyond that though I don’t have too much else to complain about with Universe Mode and while I didn’t do much with it in previous games, I wouldn’t be surprised if that’s where a lot of my time with the game will go to once it’s released.

Outside of that I spent quite a bit of time just playing normal matches and experimenting with a new match type: 8-Man matches.  For the first time you can have eight participants in a match, though the ones I did were mainly Battle Royals.  I will say that it can be difficult trying to figure out where you are in all of the mayhem that’s going on in the ring, plus the game had the habit of mixing cruiserweights and heavyweights in these matches, though having Jack Gallagher try to take out Mark Henry is quality entertainment.  However, I did have a couple of issues that I noticed while playing other than the aforementioned ones with the kickout meter and the lack of a women’s career mode.  There is still the occasional clipping glitch, such as having someone drop an elbow on an opponent backstage with a box between them and the attacker just clips right through the box.  Then there are times where the physics remember that they exist in the game, such as when someone was trying to drag me around the ring and they dragged me right overtop of Finn Balor, and the physics acted like they should when two bodies collide like that.  Then again, these are only minor nitpicks. 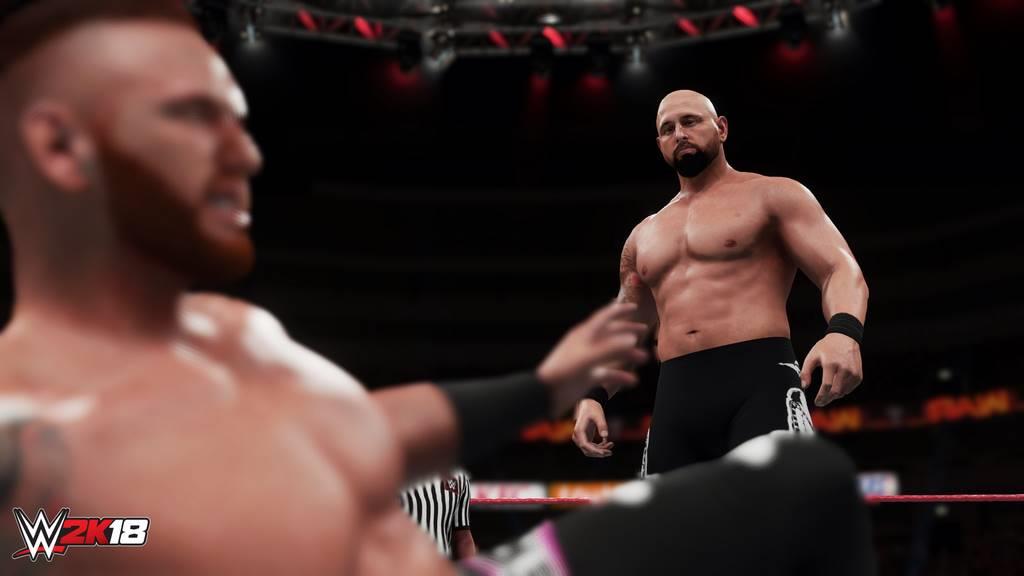 The one thing though that bothered me above everything else were the load times.  From what I understand this was being played on a PS4 Pro.  That being said, the average load time was around ten to fifteen seconds for the most part, though this was close to double during the matchup screens (after everything is chosen and the match is actually loading).  I know that past games have had decent loading times but I don’t recall them ever being that bad.  Minor things such as loading between entrances is just fine (by which I mean after one person makes their entrance and the camera points to the crowd for a few seconds before the next person comes out).  I know that with bigger games, longer load times are a thing, but it just seemed like these were going on a bit longer than they have in previous games on current-gen systems.  Hopefully this is something that will be corrected before the game ships.

Above all though, I thoroughly enjoyed my time with WWE 2K18 and the trip as a whole.  While the highlights of the trip for me were touring the WWE Archives and getting to meet Bobby Roode, Tyler Breeze, and Fandango, I enjoyed what I played of the game itself.  The WWE 2K games seem to keep getting better over the past couple of years and 2K18 seems to be keeping with the status quo.  However, this isn’t everything that the game has to offer as next week I’ll be going over some stuff with the creation suite.  However, with everything I’ve experienced, the improvements made over previous years including the crowd chanting and singing during entrances (Bobby Roode’s entrance is literally GLORIOUS!!!), and the expansive roster including the Cruiserweight Division and a large amount of the NXT roster, WWE 2K18 is shaping up to be another great edition of the WWE 2K series.