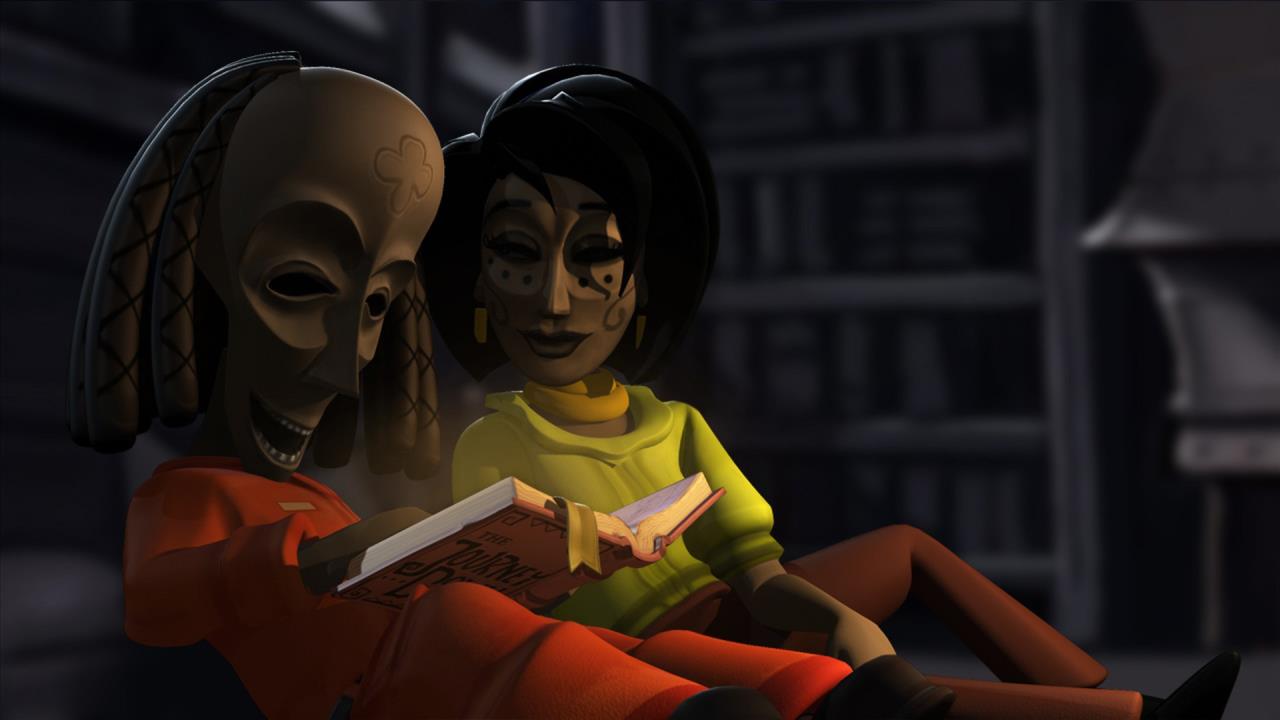 "Bwana Air - you'll never find a safer way to fly!" proclaims Bwana throughout the three chapters of The Journey Down, as his distinct lack of ability to fly propels the entire game.

Well, to be fair, he can fly - so long as he's covering his eyes. It's just everything else this lovable, yet nonsensically lucky oaf has a bit of trouble with. And when I say lucky, I mean it; the puzzles on which this point-and-click game is based have some pretty unconventional solutions, and just like Bwana you'll have to think outside the box to solve them. But man, is it worth it to solve them. The hijinks Bwana and his brother Kito, along with the ever-sensible Lina, get themselves into during the first two chapters continue well into the third, and I'm glad they do. The stylistic choices of this game - especially the unique Afro-Caribbean vibe, original soundtrack, and slapstick humor - make it a pleasure to play, and a pleasure that doesn't take itself too seriously at that. It's not your everyday whitewashed point-and-click; there's some real heart behind it.

The first two chapters of the game have been live for a while, so I'm going to focus on the third one which on September 21. Make no mistake, though; I'd be remiss to not talk about all three, given their episodic nature - one of the most prominent features of the game. Episodic structures are pretty hit-or-miss in the grand scheme of things, and I admit that I didn't get the full episodic experience since I played all three chapters in a row, but from my limited point of view I posit that it works. Each episode has its own subplot in its own area, with new characters introduced in each, and though they are irrevocably connected by the grand plot they also have the relative ability to stand alone. If they had been mushed together into one game, it would have seemed more cluttered, with climaxes and new characters around every corner. I've never been a huge fan of episodic games, but this? This works.

The first chapter opens on the backwater portion of St. Armando, a city literally at the top of the world. Bwana and Kito are going through some tough times with their gas business, since their adoptive father Kaonandodo has been missing for years and the two brothers know exactly nothing about running a business. Here, at the outset, is where the game first starts to subvert your expectations; this isn't a sad game. Bwana and Kito are full of humor and optimism around every corner, even after their power gets shut off and Lina comes into their life with a pair of gun-toting baddies on her tail. It's all about exposing corruption, discovering family history, and good old-fashioned subterfuge, but it retains its goofy and lighthearted air throughout. (The cast is fully voiced, and it's definitely interesting to listen to Bwana comment on the things he's putting into his pocket, such as a wet paintbrush or a dead fish.) 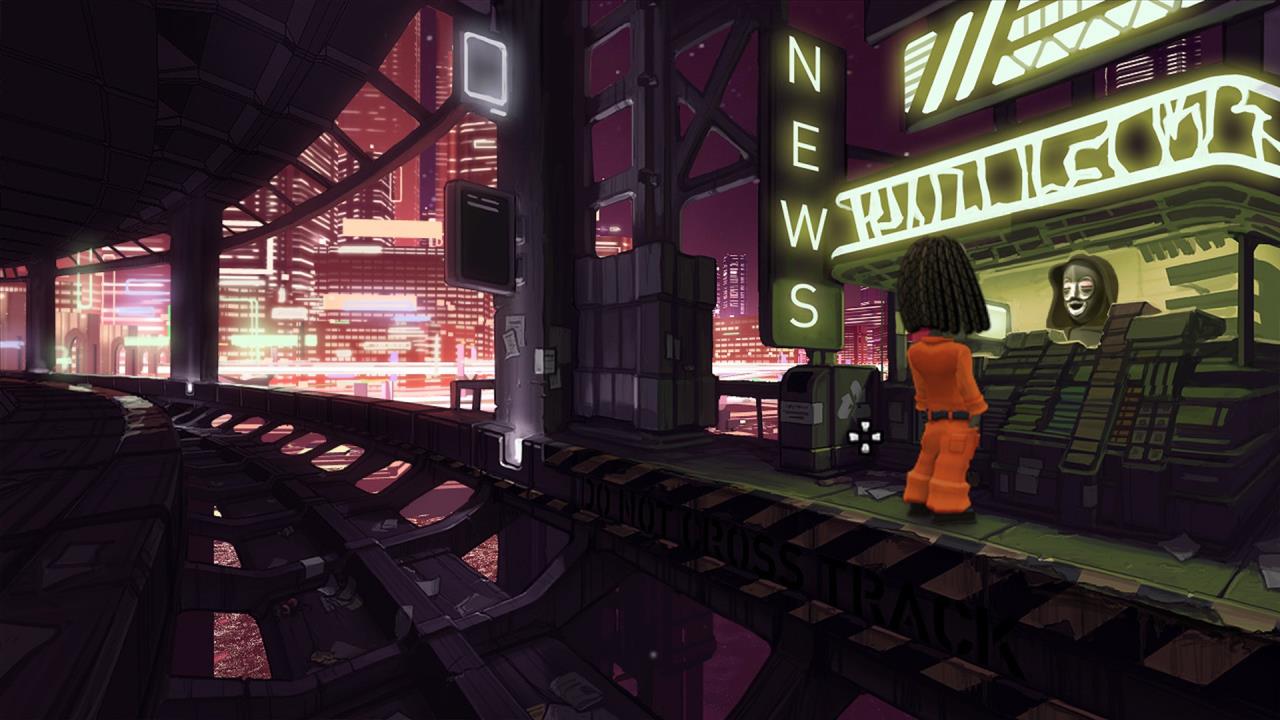 On the topic of voice lines, allow me to pause, making time for the heavens to part and for singing angels to descend on sunbeams, because you can click through dialogue. If you're a fast reader like me, you don't have to sit around and twiddle your thumbs while you wait for the subtitles to disappear and the actor to begin saying the next line on their own. Just click anywhere, and poof - the character begins the next line.

As beautiful as click-through dialogue is, it's nothing if the rest of the game looks terrible. Good thing The Journey Down has a bunch of original, diverse backgrounds that portray anything from ruins to shipyards, and while the movement is a little clunky (the characters are 3D, and the background is 2D) they create a wonderful sense of environment.

One of my absolute favorite places, somewhat unsurprisingly, is the Underland. As you might be able to tell from the title, the game is about the journey down to the forbidden Underland, for reasons I won't spoil. When you get there, hoo boy. It's without a doubt one of my favorite settings, both to look at and to listen to, and yet it seems like as soon as you get there, you're gone. The first two chapters spend their time building up to the end of this great journey down, to the mysteries that lay below St. Armando and Port Artue (because these cities literally float in oceans of mist, while the Underland rests in an ocean at the bottom of it all). You get there, and it's all the game built it up to be, and then you just...go. Bwana and Kito head back up to the city to stop various and sundry types of bad things there, while Lina stays in the Underland to stop various and sundry types of bad things there. You do go back to the Underland once, during a point of view shift from Bwana to Lina, but other than that the vast majority of your time is spent outside of the place for which the game is named. This was, frankly, disappointing, since I wanted to see much more of the part of the game that surpassed everyday settings. 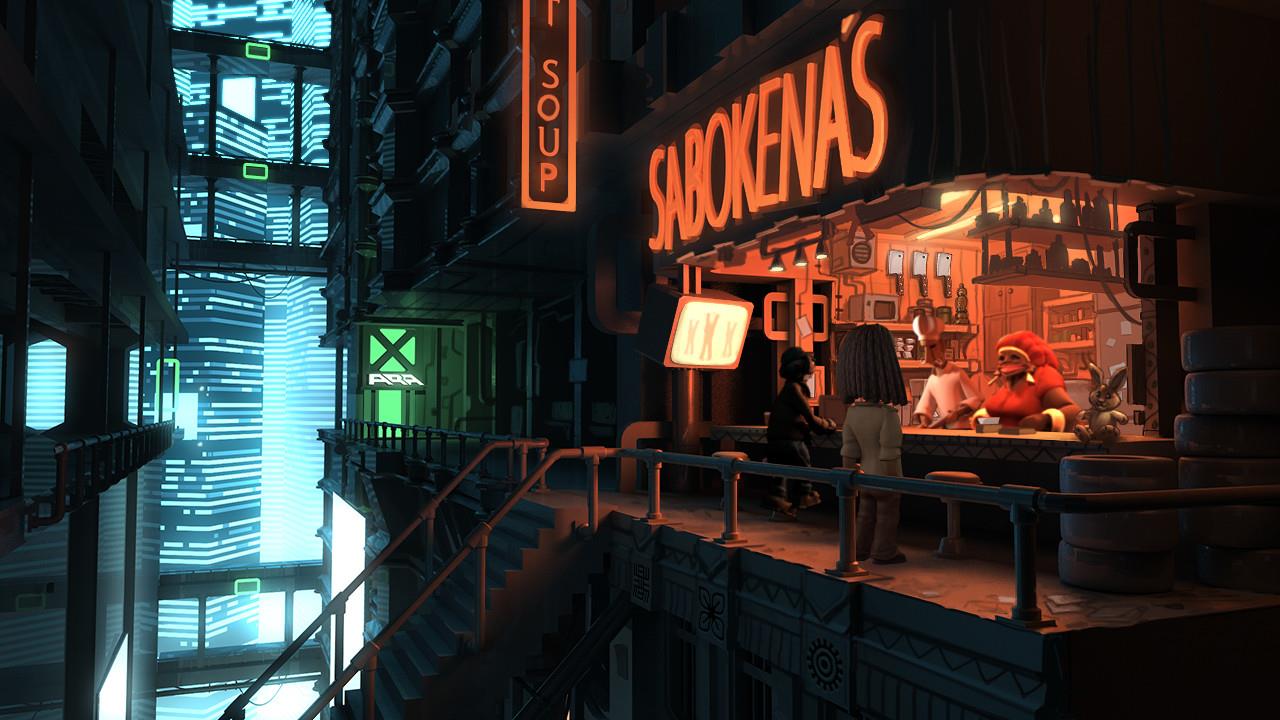 For that matter, the third chapter introduces a ton of elements that I would have loved to see earlier, or just to see more of. The Underland itself is one for sure, but the cast of new characters introduced in the third chapter felt just as real and wonderful to me as Mama Makena did in Chapter 1, and I immediately felt let down that I hadn't seen more of them. If anything, that shows how the character writing improved across the chapters, but I still felt a bit cheated that I only got to see one chapter of faces like Gabi and Bombshell, and three chapters of Lina (who I like, but who felt a bit one-dimensional in comparison to the rest).

Now here's my difficulty. I have some comments I want to make about the ending, but it's, you know, the ending. So here are my vague approximations of the comments I would have made, int he hope that they'll make sense once you experience the ending for yourself. The plot points have a ton of potential, but seem to get mixed up especially regarding the function of a certain horn. The music in the ending goes hard, but is a bit abrupt re: the product of a certain horn. And for the love of god, I understand that Bwana's whole thing is the easygoing goofy schtick, but can he be serious for two seconds when someone else is in mortal danger?

And finally, the puzzles. I don't think I've ever had so much fun and frustration with solving the puzzles, and both are for the same reason. Consistent with Bwana's character, the solutions are unconventional at best and confusing at worst; for example, he uses stale breadsticks to replace the rungs of a ladder, and smears a fish with peppers in order to dispatch a pelican. Sometimes I found myself so baffled I couldn't make forward progress for a whole day, but I always shook my head and laughed at the solution once I figured it out.

At the end of the day, the game is great - especially the third chapter - and it's clear that people with some real passion worked their hearts out on it. Despite its flaws, it's gorgeous to look at, gorgeous to listen to, and gorgeous to experience. I've never played a point-and-click quite like it, and doubt I will ever again, though I would relish the chance.

The Journey Down's story is captivating, confounding, and lovable all at once, with its roots in real-life culture making it all the more unique. Chapter 3 especially feels engaging and exciting, though the tone of the game never strays from its intention. There are plot details that could do with some patching up, but ultimately it was a pleasure to play, and I would definitely recommend it for somebody looking for a point-and-click puzzle game that carries with it a breath of fresh air.