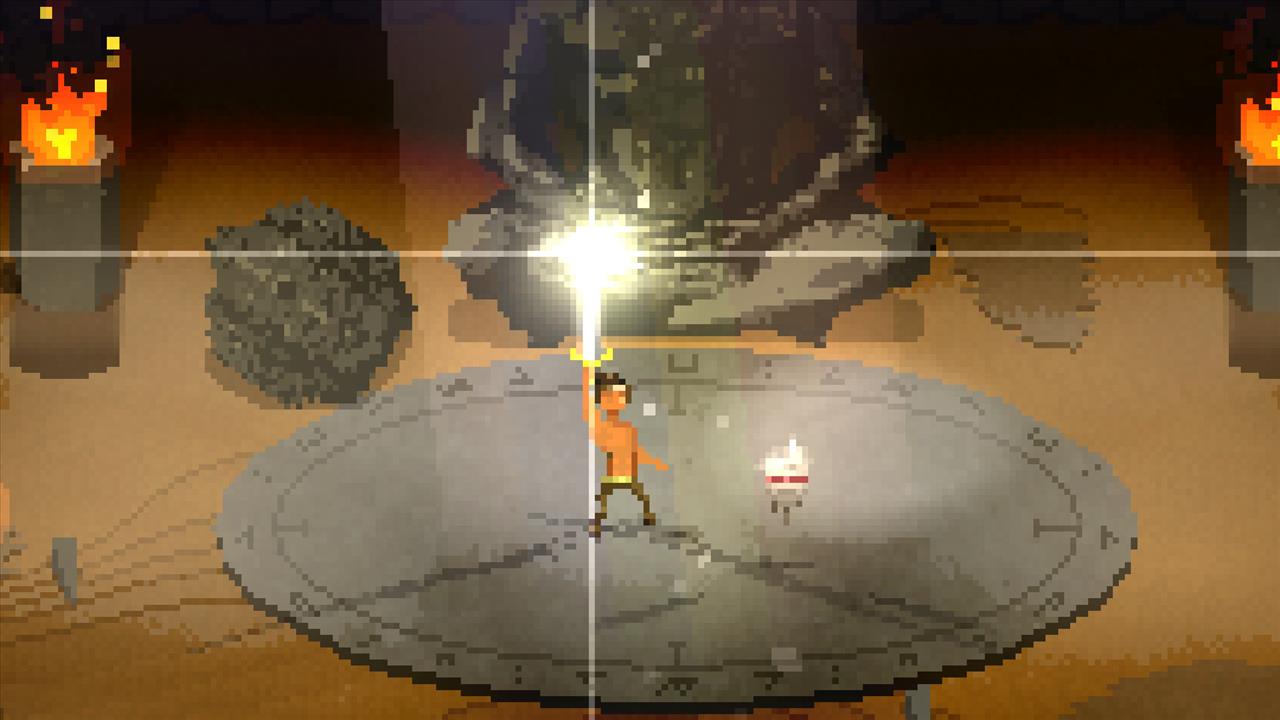 So, you’re basically Slash from Guns N’ Roses, shirtless with a top hat, and, instead of rocking a Les Paul guitar you’re swinging a customizable nanosword. After a bolt of lightning knocks you right off your sky bike, you wake up in a roguelike rearranged world of puzzles, goat-headed demons, and various hack n’ slashery allusions.

If it already sounds like Songbringer tries a little too hard, maybe you’re right. At least it’s carving a niche, though. The glam metal science-fantasy album covers of the 1970s and ‘80s don’t exactly lead the way when it comes to video game world building. But here we find a healthy compromise. Songbringer resembles Hyper Light Drifter more than Brutal Legend, and anything taking its cue from Hyper Light Drifter is heading in the right direction, in my book.

You are Roq. Pronounced “rock,” I’m almost certain. You come from the Just-a-Dude School of Video Game Character Acting. You say, “Whoa,” and, “Like,” with equal conviction. Which is okay, because the more self-serious lore balances out that nonchalance. Like when a pyramid tells you—inside of your meditative state—that “Lassauriam, keeper of the night. Her, found at the center of an asteroid. She, harbinger of ice ages. Archangel of the deep, cold.”

I mean, who knows? Unless Laussauriam was that red-and-blue dragon boss fight. It might’ve been. It’s hard to put two and two together when fighting for your life. The lore feels disconnected from the hack n’ slash narrative you’re writing out with your nanosword.

You traverse the land, one rectangular grid at a time. At the beginning, I seeded the random map generator with the letters Z-E-L-D-A. That creates one arrangement of the world. Were any other player to type in those same letters to seed their world, the exact same world would come up for them. If I want a fresh arrangement, I can type in a fresh set of letters every time. If I decide to become a speedrunner, then I can type in the same letters every time and really get to know the lay of the land. When I went on a permadeath run, I seeded my world with the letters D-E-A-T-H. Either way, the sliding puzzle pieces that make up the world don’t appear to be self-aware enough to know what I typed.

So this is the planet Ekzera. Always Ekzera, and with always-familiar pieces, but always rearranged when you want it rearranged. Sandy steppes rise above dusty plains. Pontoon bridges span lakes fed by waterfalls, joined by lily pads and flanked by water grasses. Forests rich with evergreen and deciduous woods stand tall over fruit-bearing bushes. Bugs dash and hop over the ground while murders of crows watch you patiently before taking flight. The day cycles into night and cycles back into day. And wait till you see it rain. 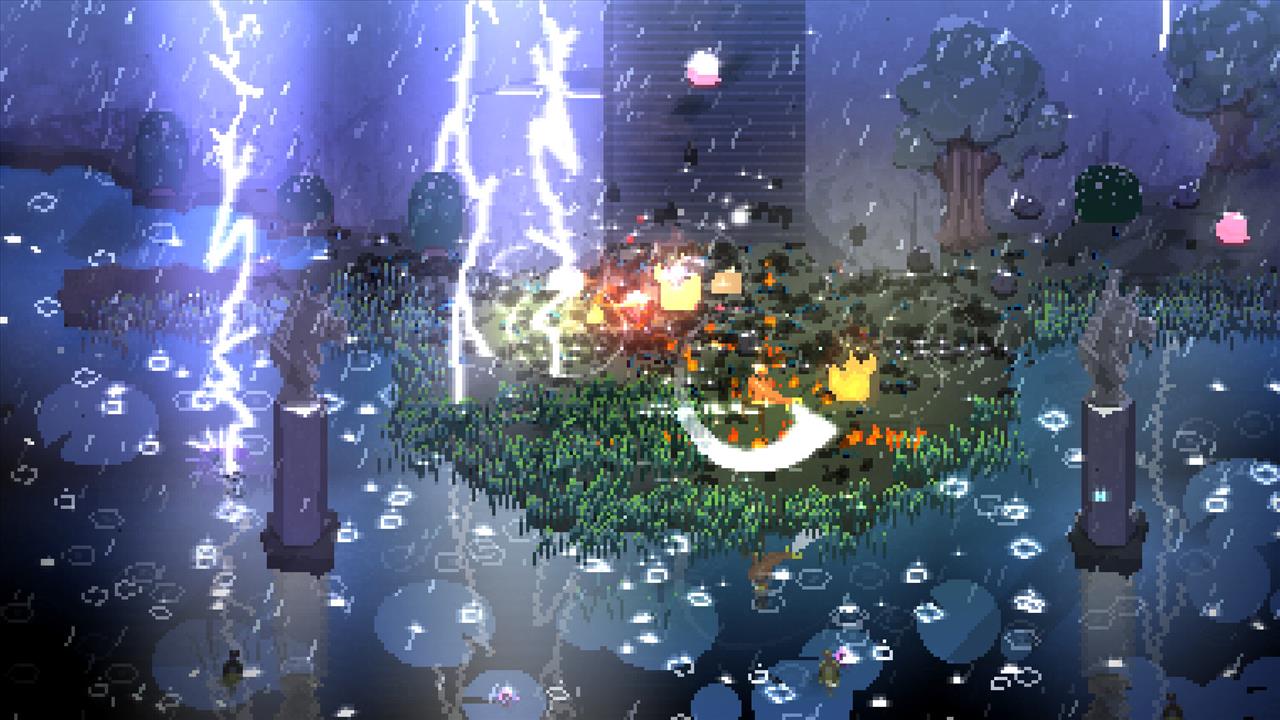 You’re not alone here. Your trusty skybot, Jib, is here to scan everything you’re chopping up into little bits, extracting diamonds and bombs and demon’s teeth from the dead.

That may require a little explaining.

While some inventory items make enough sense—diamonds are money, bombs are bombs—some items aren’t as obvious. Instead of hearts, for instance, Roq’s health is measured in demon’s teeth. And Roq’s health isn’t health, per se, but courage. As he takes hits, he loses heart. I mean teeth. Not his teeth, but the demon teeth. And he regains courage by picking up more teeth as a loot drop, meditating (a learned skill), hovering for a few moments in a triangular stonehenge, eating a hallucinogenic cactus, or drinking from a flask he got from a pig-headed nomad in need of an alcohol fix. There are lots of ways to regain life, but just as many ways to lose them.

Across the gorgeous 8-bit landscape are enemies various and sundry. Squat two-legged elephant-trunked creatures love to patrol the screen’s perimeter. Green tentacles rise up out of the ground and scatter erratically when you hit them. All manner of colorful blobs hover or hop around, taking a lot of damage and loving it when they get to Divide in two. Not to mention the water dragons that lift their ugly heads out of the water just so they can spitball at you, then sink back down below the surface.

Then there are bosses and minibosses. Often thriving in dungeons, these monstrously large creatures trap you in a room with them and make you duke it out. You could be sliding across icy bricks, dodging icy serpents doing pull-ups on the sides, while an enormous alligator-looking boss blows an icy breeze. You could be stuck on a date with a skull-faced minotaur wearing Roman legionary armor, swinging an enormous sledgehammer in a room crammed with destructible columns. Or dodging acidic spittle flying out of the mouth of a giant sand worm with more teeth than you’ve got lives.

I wasn’t ready for the boss fights. Not really. Not until I found ways to level up my nanosword so that it shot fear at my enemies. Not until I turned my boomerang top hat into a lightning boomerang top hat, so that bolts of white shot down from the sky with every hit. And not until I upgraded my skybot, Jib, to set things on fire whenever it had the chance. That’s when I really felt like Songbringer opened itself up to me. 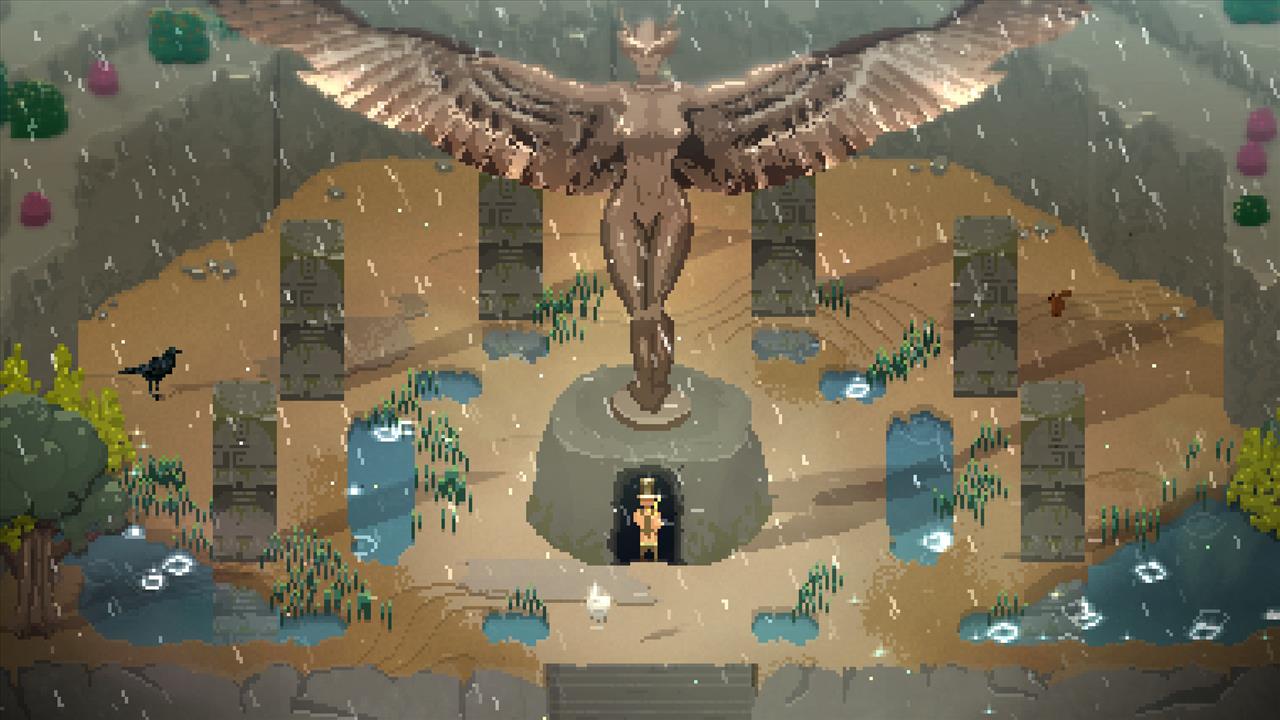 In the early stages, your swings feel slow, your running feels slow, your boomerang top hat feels slow. But you deal with it. You time your button presses. You stop button mashing. You measure the arc of your swing forward, above, and behind. You’re just getting the hang of how deliberately hard and monotonous your attacks can be. Then you get those upgrades. Those boots that take you up to an Usain Bolt sprint. Those top hat upgrades that pumps 1.21 gigawatts of screen slowdown into a room swarming with bad guys. And when I say “slowdown,” I mean it with complete affection. It’s the most wonderful frame rate slowdown I’ve ever seen in a game when dozens of goat-headed demons are eating a bowlful of electric bolts crashing down from the sky. Could I even find my character in the crowd anymore? Not at all! Did it matter? Well, sort of! But it’s still such a blast when the screen is exploding in so many directions at once that you joyfully give up your measured attacks, you give up your timing, you give up everything that helped you “get good” up to this point, and just, once more, start button mashing for your life.

That’s when Songbringer sings. The early game is easy to walk away from. The combat is so droll at first. The sword doesn’t feel great, and the hitboxes don’t feel right. Your hat moves like a tugboat pushing an aircraft carrier into port. Your little dash is too little and not very dash-like. Every new way to combat your enemies feels like a new button to learn, but not a new way to own the scene. Roq has got attitude, but he’s weak once you get past his admittedly very positive open-mindedness.

But then those upgrades show up, and boy, I’ll tell you what. That’s when Roq begins to rock. Due to how seemingly un-fun your low-level powers are introduced, the later game is an adrenaline injection to the chest. 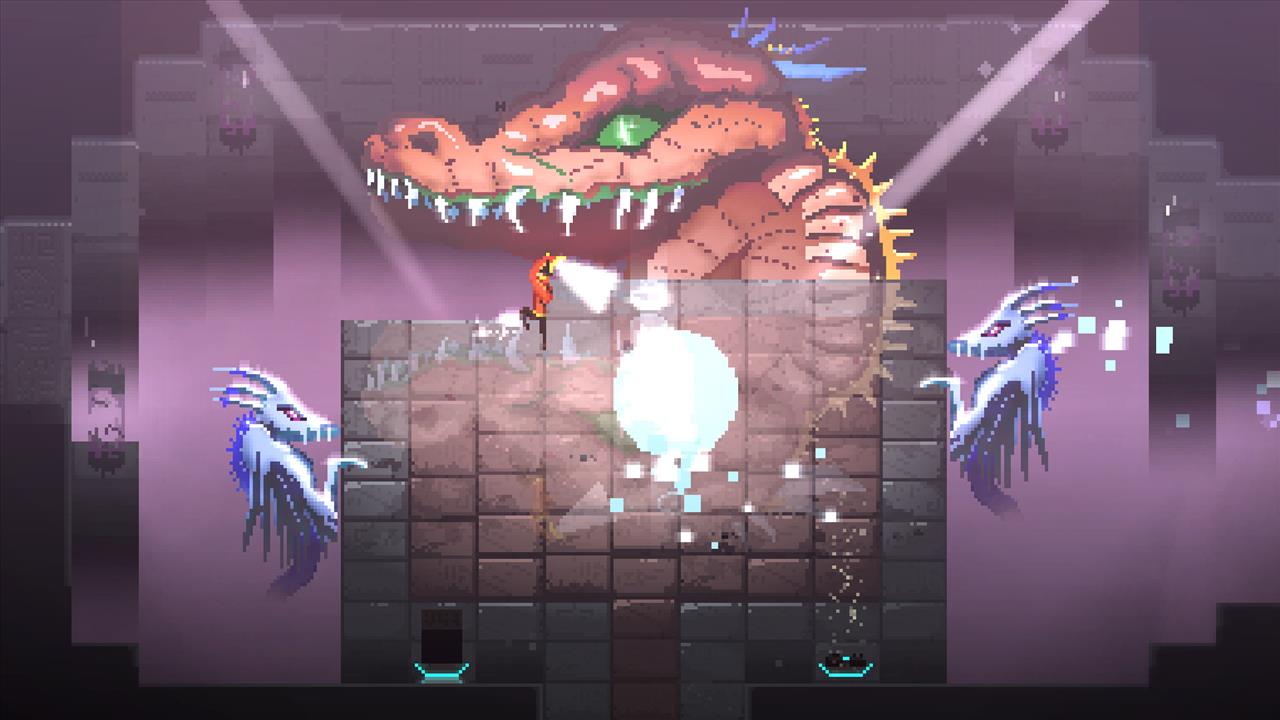 Songbringer doesn’t readily reveal its hand. After eight hours, I’d only just figured out that meditating heals. I knew it could open doors. I knew it could make me, as a player, take a little breather from time to time. But it was a revelation when I sat down in a lotus position, resting my wrists on my knees, and after a few deliberately long seconds, watching my health slowly tick back up. Mind blown. You don’t gain experience points in Songbringer, but you, as a player, gain experience. That knowledge makes you that much more powerful on subsequent playthroughs.

Multiple playthroughs are something I’m virtually never interested in, but I have been in Songbringer. Sure, the names of some trophies tipped me off to different approaches I’m trying. Like a speedrun in less than two-and-a-half hours. Or a run through where I skip picking up the nanosword and beat the game with only the top hat as a primary weapon. And definitely a run through where I uncover 100 percent of the map, picking up 100 percent of items along the way. Maybe I’ll do them all on my Z-E-L-D-A map so that I can beat it on a permadeath run. 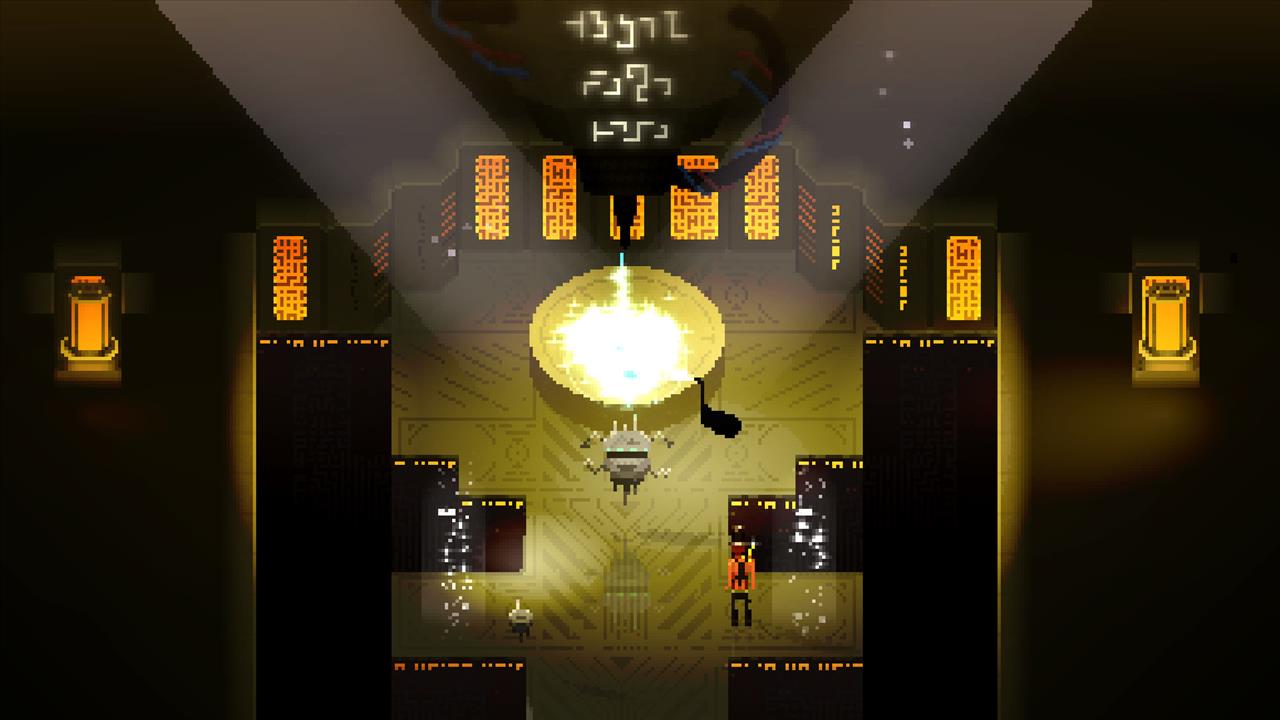 What I mean is, where Hyper Light is wounded and sickly, Songbringer is chest-pounding and chin-lifting. Where Hyper Light is dark and driven, Songbringer is, sometimes, eye-rolling and whimsical. Hyper Light is a literal manifestation of the designer’s heart problems. Songbringer is...sometimes troubled by blaxploitation imagery? Like, Roq’s captain looks like a space pimp that wears a cape and has a long feather quill sticking out of his wide-brimmed hat. Oh, and this space-pimp captain’s first officers are thick black women, all hips and thighs.

Do you know what to make of that? I don’t. Still couldn’t by the end of the game. But that just speaks to how heavily influenced Songbringer is—as an equal and opposite reaction—to Hyper Light Drifter. Where Hyper Light goes high, Songbringer goes low.

That’s ultimately what holds Songbringer back. In its search to make its own mark, it paints itself into a corner. On paper, it sounds ludicrous in all the right ways. For the most part it is. I certainly had fun. But I don’t anticipate it’ll burn into my memory like Hyper Light Drifter has.

But there is some good artistry to explore here. Some dull swordsmanship, too, until you reach your sword’s higher-shelf powers. The music is shapeless, though I can’t help but smile at the Zelda nods in its library of sound effects. But I won’t deny for one second that Songbringer didn’t bring me to try multiple playthroughs; something I didn’t think I’d want to do until I finally beat it the first time. Then I wanted to dive right back into a second verse with Songbringer.

With a particle-heavy 8-bit paintbrush, Songbringer is a glam metal Zelda. Songbringer doesn't try to finish what Hyper Light Drifter started; Songbringer has heart of its own. It's easy to like but hard to love.