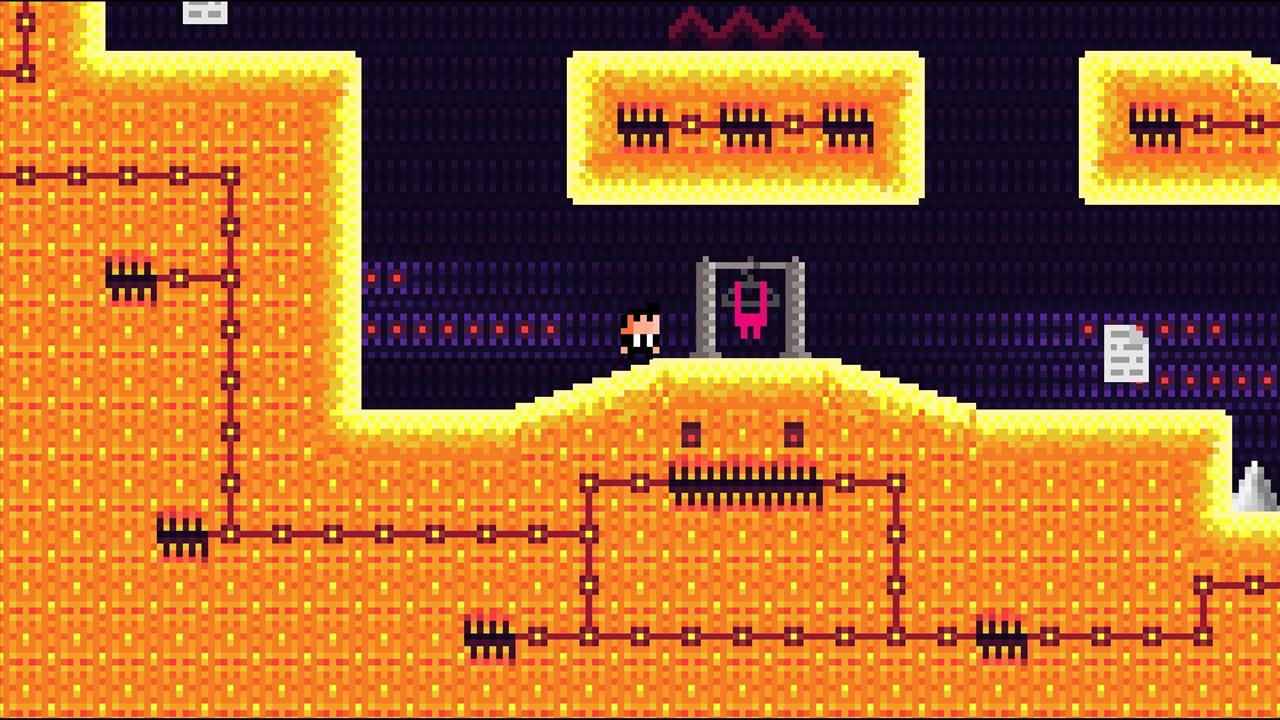 Sometimes it doesn’t take much to make a game enjoyable. I grew up on the Atari 2600 and the NES, two systems that only had a couple of buttons at most to use in a game, but that was enough. It’s interesting how you can make a complex game just using a basic control scheme (well, for the NES anyway). That’s not to say that today’s games and systems aren’t enjoyable with their multiple buttons and functions. While retro-inspired games have been pretty big in recent years, Necrosphere shows that you can make an enjoyable game by only using two buttons and no D-pad.

You play as an agent named Terry who was shot during an ambush and is, well, dead, as you gather from little notes scattered around. You end up in a place called the Necrosphere. Hey, we now have a game that at least explains how you infinitely respawn at various checkpoints; you’re already dead so you can’t really die again. The Necrosphere contains notes lying around somehow placed there by the living. Also, you can’t jump. You can’t attack. You can’t really do anything but move left and right, at first. This is the main mechanic behind Necrosphere—solving puzzles with incredibly limited options. In fact, even once you’ve begun picking up power-ups, the game still only uses two buttons: left and right (or the triggers or shoulder buttons on an Xbox 360 controller).

Necrosphere is essentially a Metroidvania-style game where you start out with only one real path you can take before coming across a new ability that lets you access another area, and so on. These upgrades let you dash/hop over small gaps, break rocks while dashing, or even acquire a jetpack. What’s interesting is how Necrosphere makes all of this work while only using two buttons. The dashing is rather simple; just tap a direction twice.The jetpack, though, takes a bit more skill. You have to hold both buttons to fly straight up and you have a limited amount of fuel you can use before you fall out of the sky (landing refills the jetpack instantly). The skill comes into play when you have to move left to right in the air. As soon as you let go of one of the buttons you’ll start to fall in the direction of the button you’re still holding. You have to rapidly tap the buttons to fly in the direction you want while being careful not to use up all of your fuel.

Most of the rooms in each area have some sort of puzzle to work out. Whether it’s jumping on bubbles to get around, getting past enemies and making them fall into fire so they stop pursuing you, or just trying to navigate around obstacles while traveling at a fairly rapid rate, whether it's due to vertical shafts that automatically lift you up or you’re using the jetpack. The puzzles do get more difficult over time but are never obscenely difficult. Nor can you get into an area you really shouldn’t be in at the current moment. The puzzles start out simple enough. Again, you don’t have the dash ability right away, so you might have to bounce around on bubbles to reach buttons to press or to cross pits of spikes. The later puzzles can get pretty tricky, though never downright brutal. By the time you reach the later areas you’ll have had plenty of time to master the controls and your abilities. A word of advice though: find a safe place to practice using the jetpack. The later puzzles can be a nightmare until you do. More on that in a moment.

As to my other point, while you can go into an area or two that you shouldn’t be in at that moment, you can’t really progress. One area, for example, starts out with a strong wind pushing you back, and there’s a large pit of spikes in front of you. When I first got there I realized I shouldn’t be there yet. But once I got the jetpack I knew that’s where I had to return to. In other words, unless you’re a dedicated speedrunner looking for ways to break the game, you can’t really sequence-break in Necrosphere like you can in other games. As you continue, you’ll come across some DVDs which you can pick up for an in-game achievement, as well as some torches to light for another achievement. The DVDs are usually in difficult-to-reach places. I wasn’t able to collect them all at the time of this review. However, they're something else that adds to the game’s replayability. 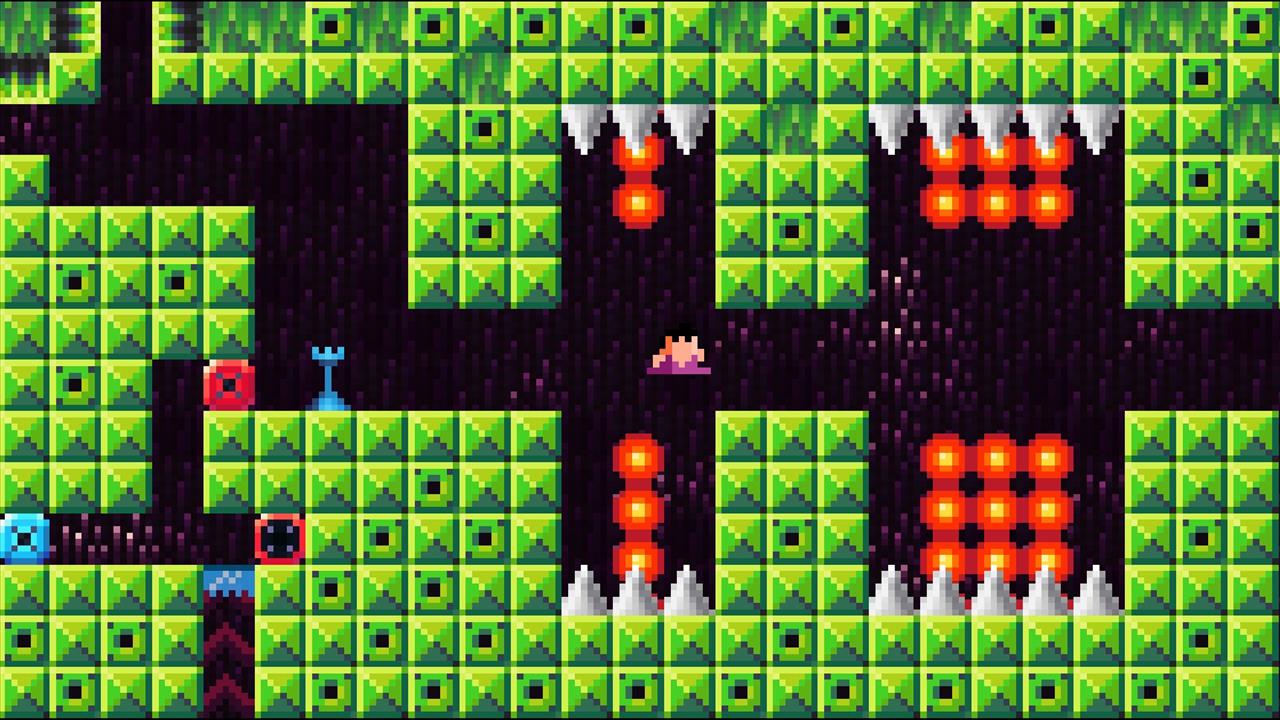 The game has DLC in the form of Terry’s Dream. In this side quest you play as Terry—but without any clothes. I’m not joking. The reasoning is that you’ve lost your powerups and have to recollect them in a different order. In the main game Terry at least had a suit and tie. Anyway, if you haven’t mastered the game’s controls and mechanics yet, you’ll be in for a world of hurt, because this journey takes everything you’ve learned in the main game and amplifies it. It’s pretty difficult. It's best if you’ve cleared the main game first, as Terry’s Dream requires a lot of careful maneuvering, dodging, and jetpack usage to clear.

So where do I stand on Necrosphere? Overall the game is very enjoyable, though the difficulty spikes in later areas. That is to say that the first half hour to an hour I didn’t have too many issues. Granted I did die quite a bit, and thankfully there are checkpoints basically after every puzzle. But the early going was pretty simple. Once you get the jetpack and the ability to dash, things start to ramp up. One of my favorite puzzles was where you had to jetpack back and forth across a room that had a three-by-three grid of lights that you had to light up in the correct order. Granted it’s mostly a guessing game, unless I missed something that told me the correct order. And if you either die or hit a light out of order, you have to restart the sequence. But this is what helped me hone my jetpack skills as there’s a lot of careful maneuvering involved to hit the right switch at the right time.

My only real complaint is that towards the end, and especially in the DLC, there’s quite a bit of jetpack maneuvering that can get real difficult real quickly. I’m going to be honest, I couldn’t complete the Terry’s Dream DLC as I got stuck part way through. I’m thinking I missed something somewhere, such as an alternate path, but if not, then where I got stuck requires pixel-perfect timing that I can’t seem to pull off. Other than that though, Necrosphere is a simple yet complex game that is enjoyable without getting too frustrating for the most part. For five dollars I’d say it’s worth a shot.

Necrosphere shows that a simple game can be complex when it needs to be without being overly difficult, for the most part.  The later areas of the game do require a near mastery of the controls. But overall, Necrosphere is enjoyable, and for a budget-minded Metroidvania, it’s definitely worth a look.