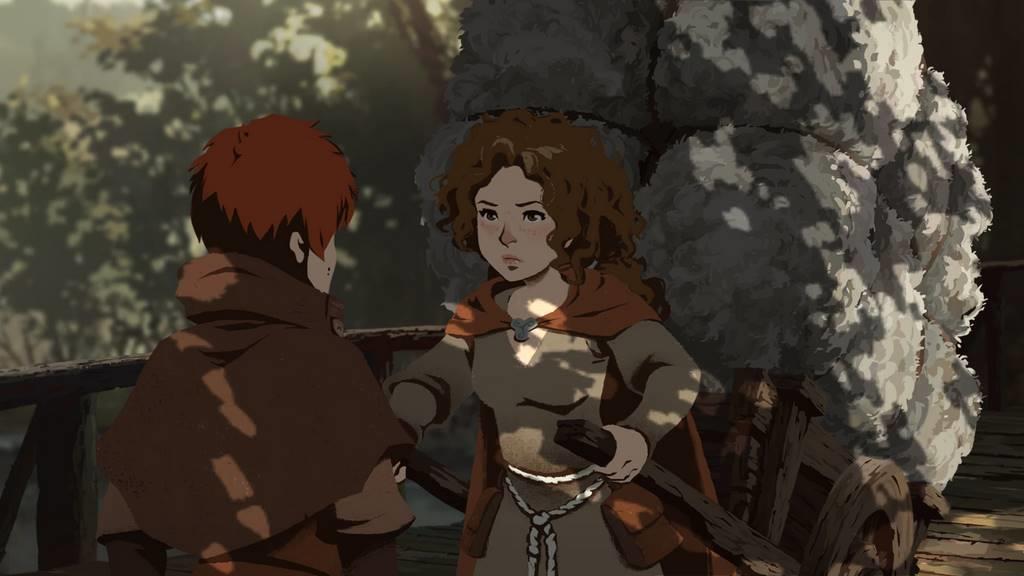 Pillars of the Earth

To get to the point, I—as I say in a lot of my reviews, funnily enough, but this time I mean it more than usual—had absolutely no idea what to expect when it fell to me to review Ken Follett's The Pillars of the Earth. Like, the novel is about the church versus the state, except this time in the 12th century. I wasn’t really sure how exactly someone could make a video game about that, not to mention one that follows the exact plot of its novel while still providing the illusion of choice (which I’ll get into later). It definitely has its flaws, many of them mechanical, but I will say up front that this unique medium provided me with a whole new facet of the story and made it a mostly beautiful experience.

As an aside, this review isn’t as long or as thorough as I would like; after all, this is only the first installment out of three. It’s a massive novel, so it’s natural they would want to split it up as part of the transition to video game form.

And with that talk of video games, let’s jump right in, because like I said earlier this isn’t really a video game at all. It’s an interactive novel. You’re given dialogue choices, but it doesn’t often feel like it matters either way. You know it’s based off a book, and you know that you can’t very well drastically change what’s happening in the book, so it often feels like the developers just slapped in dialogue choices so they could call it a game instead of an animated movie.

For example, one of the first things to happen in the game is the birth of a child. You play as the mason Tom, who is trying to help his wife give birth in the middle of the snowy woods and must select options from a dialogue wheel to aid her. The scene has a lot of gravity, sure, but in the book it’s a really important moment that drives the plot, so the devs can’t very well change it in their adaptation. So, basically, you know that whatever you do, the outcome will be the same. It’s an illusion of choice, like I said. Of course, this doesn’t apply to the whole game; there are some fairly major choices over which the player does indeed have control. It’s just a bit conflicting to know that my control is limited, especially in this medium. 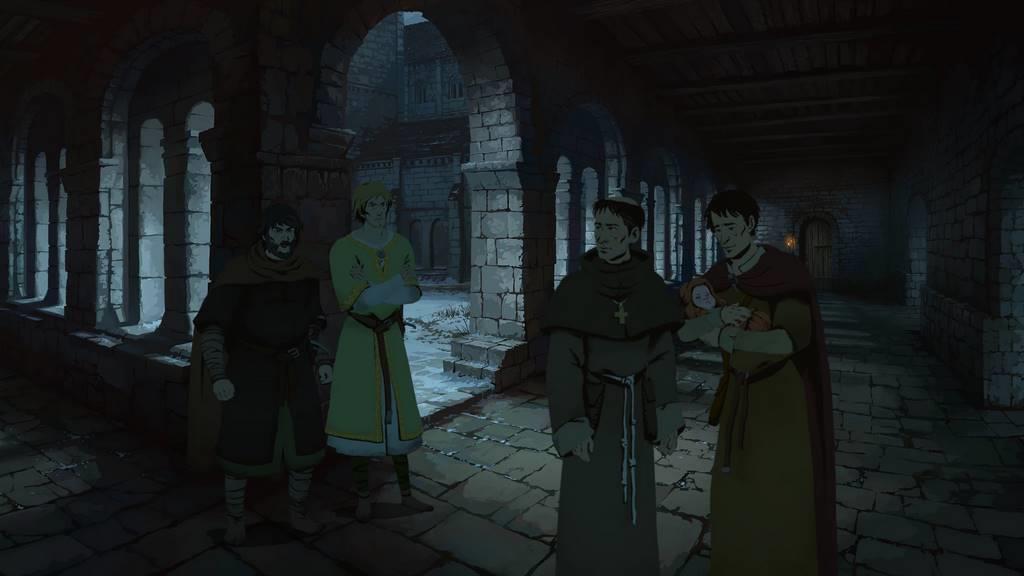 If you go into this recognizing it as an interactive novel and not a video game, it becomes less of an annoyance. The key is letting yourself get carried along by the story, recognizing that you are only a guiding force and not at all a decision-maker, at which point you can finally stop griping about it like I did and sit back in my chair to play.

I’ll postpone the rest of my griping so I can say this: the game is visually beautiful. The hand-drawn backgrounds of each scene are breathtaking, and they provide a whole new element to storytelling that not even the best book can fully accomplish. They’re also entirely unique, and it provides a unique facet to the storytelling by your ability to move through it. I was particularly blown away by one scene in the beginning where Tom quite literally makes a cathedral come to life while he tells his daughter about it; bit by bit, it springs to life from the dreary forest around them. Nothing like that is even hinted at in the novel.

Something else that blew me away? The voice acting. I’ll admit that I’ve never been fascinated with 12th century churches, but the voice actors were so genuine and convincing that I forgot they were, well, actors. It’s rare that such a thing happens to me, because these days for some reason I’m always hyperaware of the very second something stops sounding real. Not only that, but every single line is also acted; the devs took no shortcuts in that regard. Even conversations that don’t trigger a cutscene are voice-acted, and it’s an absolute pleasure to listen to. 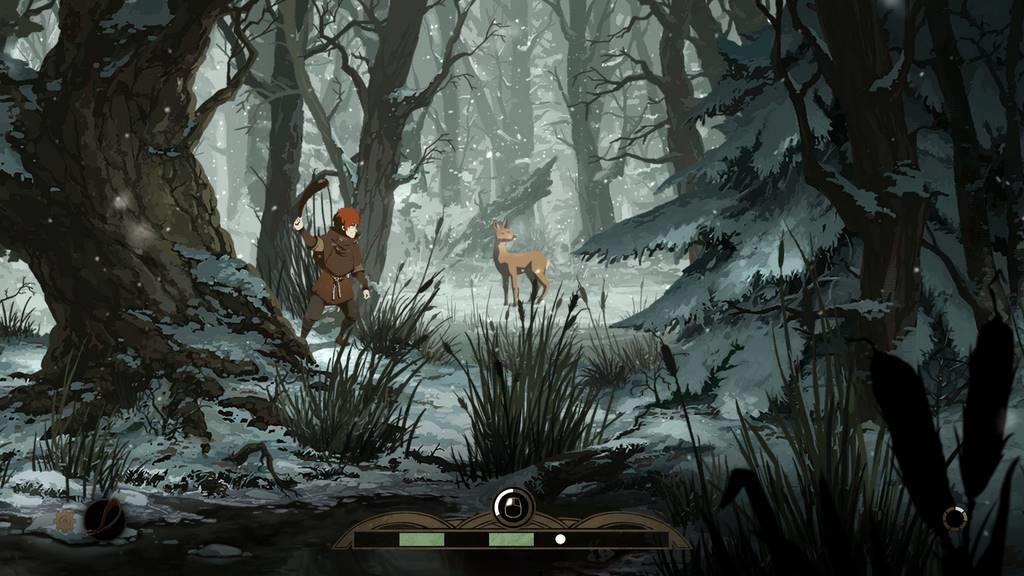 (While I’m on the subject, I want to express my absolute excitement that when you select a dialogue option, the character actually says exactly what the dialogue option says. This may not seem like a monumental thing, but for someone like me who lives and breathes Dragon Age and Mass Effect games, it matters. In those games, you can say “I’m fine” but your character will launch into a ten-minute passive aggressive tirade about how they are not, in fact, fine. There are no such conflicts in The Pillars of the Earth.)

Honestly, most of the negative notes I made about this game are either minor or circumstantial. For instance, I played it on Xbox One, so the controls were a little bit off for me, and even counterintuitive at times. It took me a little while to remember what they were, but I imagine you wouldn’t have as much of a problem with this as on PC. For another thing, I have a pretty small TV, so it was pretty difficult for me to see parts of the game (especially during cutscenes without subtitles, when the tiny head and mouth movements were my only indicator of who was talking). That was also kind of awful whenever the camera drastically zoomed out to show a huge area, like in Kingsbridge whenever you’re outside the priory.

Again, probably just me. But in case you’re in the same situation re: technology and platforms, it’s worth bearing in mind. 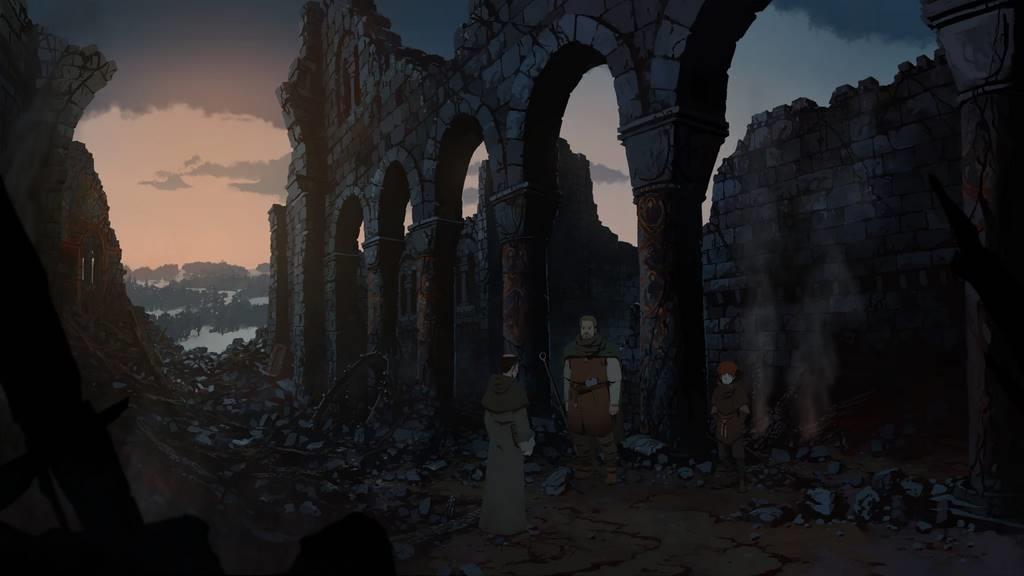 Some of the animations and the like are also a little awkward, which normally wouldn’t be an issue—because let’s be honest, every single game under the sun has an awkward animation here and there—were it not for the story-based state of the game. The Pillars of the Earth doesn’t try to paint itself as a purely story-based experience and then pepper in complicated aspects of gameplay; it knows it’s a story, and it’s good at what it does. The fact that it doesn’t focus so much on gameplay, however, means that strange animations do more than normal to jar the player out of their experience. It’s a little hard to pay attention to the story when you can’t get your character to go straight through an exit for once, or when silence falls for a good five seconds right in the middle of a conversation.

If you’re to take anything away from this jumbled review, it would be this; my experience playing The Pillars of the Earth was tainted by factors outside my financial control. Your experience will not necessarily be the same. The book was acclaimed, and Daedalic Entertainment took a chance on translating it into a video game—a chance that paid off, in my opinion. I’m able to recognize that even though it may not have been my cup of tea, the love and hard work that went into this game are undeniable, and I look forward to the next installment.

The Pillars of the Earth has its mechanical flaws, and it doesn’t translate seamlessly from medium to medium due to technological constraints, but that aside it’s a truly gorgeous experience. The art, music, and voice acting all come together as one to blend this story into one that transcends the pages upon which it was originally written, making it a very unique and interesting experience.