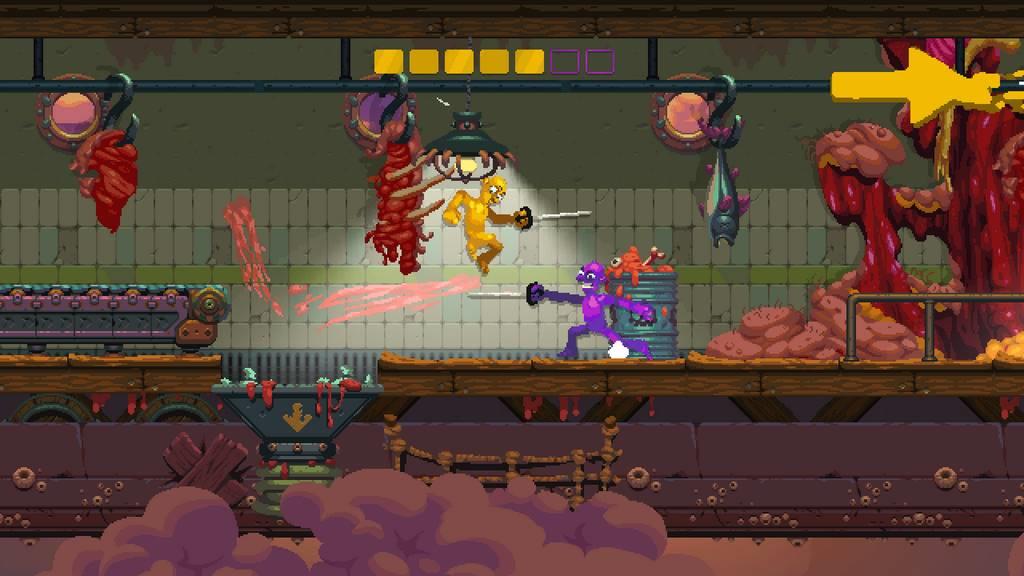 I never played the original Nidhogg.  That’s kind of puzzling considering the characters look like they came straight from a Colecovision game and I’m usually into games that look like the classics.  Nidhogg is a fencing game where you go through each stage while defeating or getting by each opponent as you go.  While I never played Nidhogg, I recently got the opportunity to check out its sequel: Nidhogg 2.  Time to see if I’ve been missing out on a fun series or if it’s a good thing I never picked up the original.

Nidhogg 2 has three game modes: Arcade, Local, and Online.  For each mode you can customize your character to give them a unique look and color.  Arcade is the single player mode of the game and works pretty much like the original game.  Each stage has several areas and both you and the opponent start out in the center with your weapons.  Here you basically fight for control of the stage as once one of you dies, the other person will gain control of the stage and can start moving towards their goal (going right for player one and left for the CPU or player two in multiplayer games).  Once one of you reach your goal the stage ends.  When you die however, you’re not completely out of the game; you’ll soon respawn and can once again attempt to kill your opponent to temporarily remove him from your path.  Believe it or not, that’s the gist of the game no matter which mode you play.  The Arcade Mode has thirteen stages to complete which can be completed in a rather short period of time.

You actually have several different ways of attacking with and without your weapon.  When you have a weapon you can use Up and Down to aim your weapon at two or three different heights (we’ll get into weapon types in a moment), then attack to hopefully hit your opponent somewhere that he’s not aiming his weapon.  You can also hold Up and hit B to just throw your weapon and hope it connects.  It’s basically risk vs. reward as throwing your weapon can take out your opponent from a distance, but it also leaves you defenseless.  You can also kick your opponent either by crouching and attacking or while jumping.  If you’re able to hit your opponent he’ll drop his weapon if he has one and be temporarily stunned.  The drawback is that more often than not you’ll just impale yourself on their weapon.  If you’re disarmed you can just kick the crud out of your opponent if you can get close enough.  If your opponent’s knocked down you can stomp him to death.  For a fencing game this is pretty violent…and I’m okay with that. 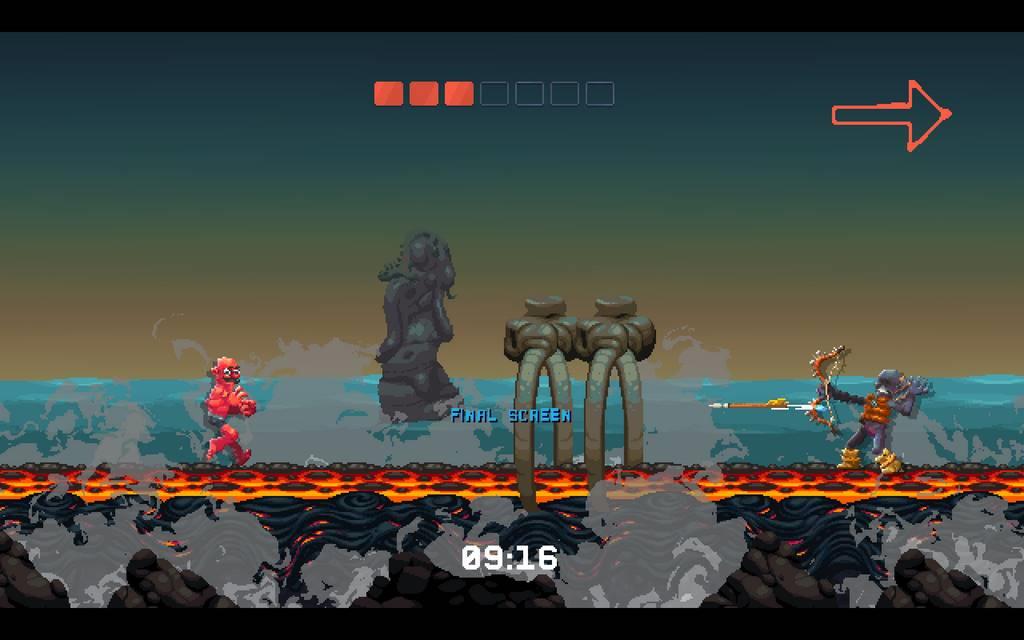 While this is a fencing game, you actually have more than just a fencing sabre.  Early on that’s all you have but after several stages you’ll start to gain access to other weapons: a bow and arrow, a broadsword, and a dagger.  The dagger is probably the worst weapon as it has limited range, though its main strength is that it’s the quickest weapon to attack with though not by much.  The broadsword is the slowest weapon but can also be difficult to avoid.  It’s also the only weapon that only has two attack heights: high and low.  Attacking low has the advantage of being able to disarm your opponent entirely.  That may seem broken but as stated it’s the slowest weapon to use and in later stages your opponent might throw their weapon the instant you lower the broadsword.  Then there’s the bow and arrow.  In the right hands this is pretty lethal.  It takes a second to draw back the arrow but you can aim it at three heights, there’s no limit to how many arrows you have, and you can still throw the bow itself.  The drawback here though is if you fire an arrow at the same height as your opponent’s weapon, the arrow will ricochet back at you and can kill you.  Needless to say I’ve had this happen quite a few times because I kept forgetting it could happen.

That’s really all there is too it; Nidhogg isn’t that long of a game, though I won’t say it’s easy.  While I’ve never played the original game, I ended up finishing a run through Arcade Mode on basically my third attempt and had a final time of around twenty seven minutes.  A lot of that was a few of the stages I had scenarios where I just could not get off of a certain screen as the CPU and I kept trading control back and forth…usually because I kept getting the bow and arrow and I hate that weapon, or the CPU kept getting the bow and arrow.  The “map screen” resembles something out of Super Mario World 2: Yoshi’s Island on the Super NES, but it’s not really a stage select, at least not for Arcade Mode.  You can’t choose which stage to start on and the game doesn’t save upon a loss or backing out for whatever reason; you have to do every stage in one run through. 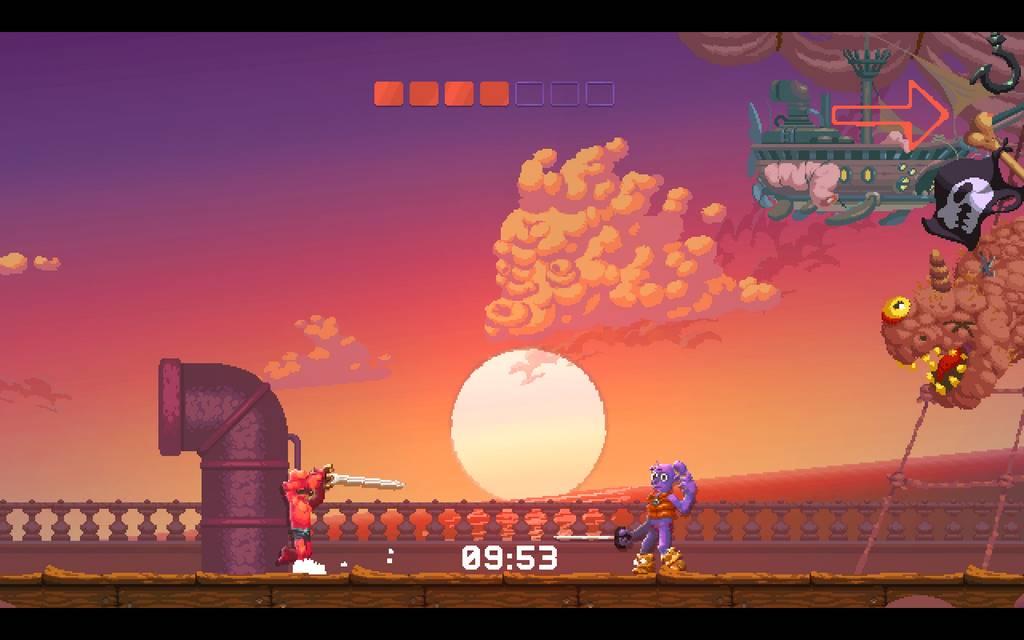 The difficulty does go up a bit as the game progresses, but even in the later stages I was able to utilize a few strategies that I used in the early stages.  There’s no time limit so you can basically just wait out your opponent and see what they’re going to do and react accordingly.  Keep in mind though that the CPU does get more intelligent in later stages as mentioned earlier, so after you adjust to your opponent, you have to make your move before they adjust to you.  You also can’t just go in weapons or feet flailing.  Well I mean you can, but you might regret it.  A lot of my deaths were impatiently jump kicking my opponent only to impale myself or drop myself down a pit.  Definitely take your time and don’t rush it.  The local multiplayer option lets you and a friend go one-on-one with a friend where you can set a time limit, which weapons to allow (you can even start a “life” with no weapon at all), and a few different cheats such as “Baby” which makes both players crawl around, or even prohibit throwing a weapon.

Overall, for someone who never played the original game, Nidhogg 2 is surprisingly short, but surprisingly fun.  The major downside is if you’re playing by yourself you only have Arcade Mode and Online to keep you entertained, the former of which can be completed in as little as twelve minutes if you’re good enough, though online does have a ranking system (and I really don’t want to see my rank after a few matches).  On the plus side though, the game is pretty entertaining regardless of which mode you play.  If you enjoyed the original game you’ll probably like the sequel as it’s essentially more of the same but with some new additions such as the new weapons and the updated graphics which, honestly, I really liked.  While pretty short unless you do some multiplayer, Nidhogg 2 is still an enjoyable game that I’ll likely go back to now and then because let’s face it, there’s nothing like trying to jump kick your opponent and accidentally impaling yourself on their broadsword.

Nidhogg 2 is a surprisingly short game, but that doesn’t mean it’s not a lot of fun.  While the Arcade Mode is rather short at eleven stages, the local and online multiplayer options will keep fans coming back.  If you were a fan of the original game you’ll likely enjoy this game as it’s pretty much more of the same but with some new and enjoyable additions.