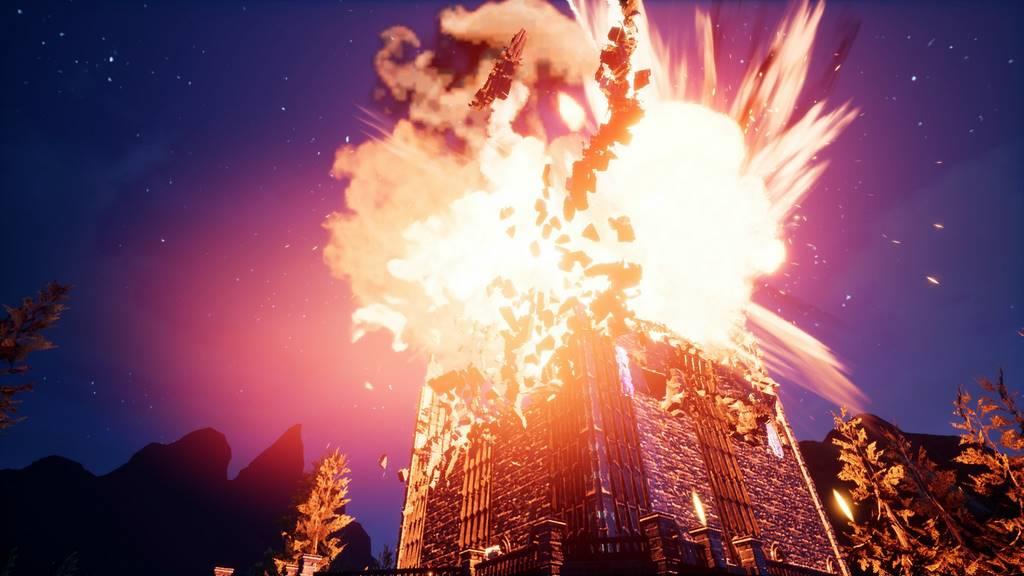 Citadel: Forged With Fire is a sandbox role-playing game for the Hogwarts generation. You’ve got your Harry Potter wands, your pointy Sorting Hats, and your Quidditch World Cup broomsticks. It’s even got architectural pieces to die for, if you’re indeed into magical academies with cathedral-like sensibilities and stairways that curve for days. It’s got everything a millennial boy wizard could wish for.

But to root the land into some kind of reality, Citadel also has a spattering of elk, wolves, bears, and warthogs. (Hogwarts, warthogs, get it?) And a pick-any-random-page assortment of fantastical creatures for a monstrous compendium. There are orcs wandering the land and standing around campfires. Giants—at least two types—walk around in eerie silence, sneaking up on you like enormous ninjas. There are skeletons so clean they belong in a high school biology lab. Bobble-headed fairies resemble Funko Pops out of a Loot Crate and twinkle like Tinkerbell. And Skyrim-looking dragons stalk the forests on their knuckles and silently take to the skies.

If any of that sounds weird, like ninja-quiet giants and silent dragons, that’s because Citadel: Forged With Fire is in beta. Well, it’s in Steam Early Access, which means it’s in an unfinished state. But that’s where you come in, intrepid Early Accessor: you’re getting in on the ground floor of a new game and a new gaming community. Everybody is still feeling their way around Citadel, kicking the tires, poking at it with a stick, figuring things out. It’s either the best time to play a game, or the worst time, depending on your tolerance for flaky servers, long load times, disappearing inventory items, and inexplicable error messages. If you can maintain your sense of humor, then Citadel has the bones of a good game. 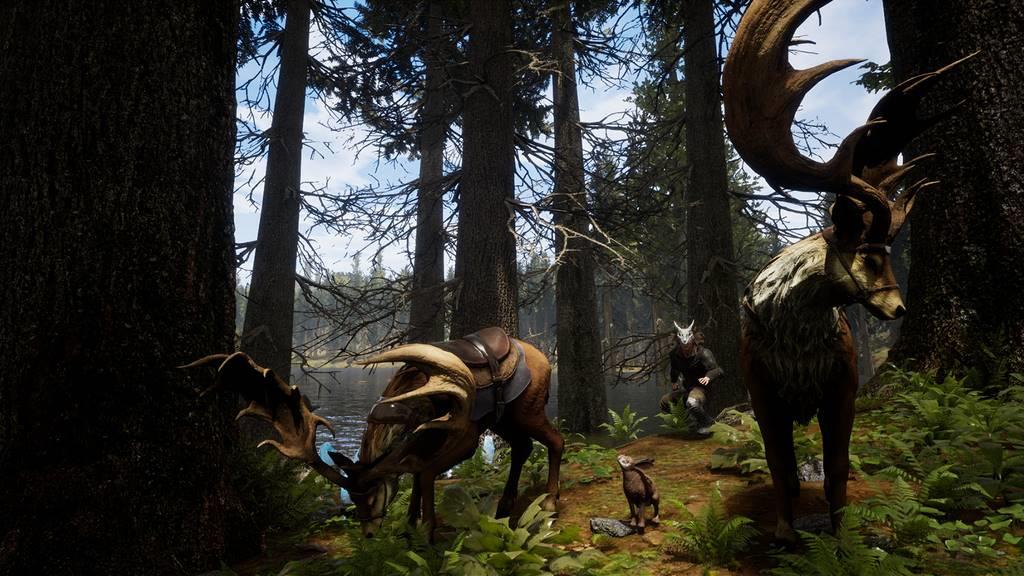 In this wizardry RPG, you mine and you craft. If you think it’s about survival-crafting, you’re coming at it from the wrong angle. This is more like Skyrim with some Minecraft elements sprinkled in. Whereas a game like Rust or 7 Days to Die is more like Minecraft with Dwarf Fortress elements sprinkled in. Which is to say, Citadel is more about building expansive castles and casting enormous fireballs rather than fighting off hunger and cringing in an unlit basement as zombies tear at the walls of your base.

Citadel has its quirks, but yeah, describing it as “sandbox Skyrim” is the gist. (That’s overly high praise, let’s not be crazy. I’m only using Skyrim as a common touchpoint, not as a game of the year recommendation.) Citadel wants you to sew together a set of robes and a hat—Gandalf the Grey robes and Harry Potter hats, mind you—picking berries and flowers to concoct a couple potions for health and mana, and picking up sticks and stones so you can build the floors, walls, and roof of your very own humble abode.

I spent the majority of my time on a player vs. environment server. There are also player vs. player servers, if you like the wackadoodle gameplay that comes out of fighting other people in a video game. You can get a purely single-player game going if you like, but you’ll be lonely. 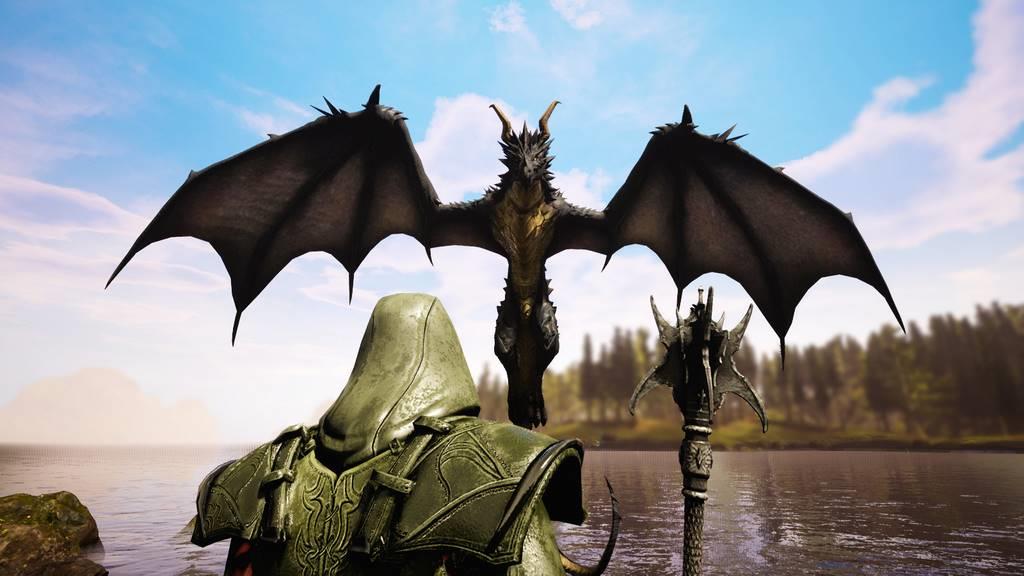 As of yet, there are no storyline missions. There are no quests, let alone side quests. No one’s going to ask you to kill 10 rats or save the world. All you know is, you wake up in a room where the floor is lava, you do indeed appear to be forged with fire (as the game’s subtitle implies), and there’s a big unexplored map waiting out there for you.

It’s a cool map, too, with reasonably named features. It’s not a bunch of weird Gaelic pronunciations and hyperactive apostrophes. It’s Wildwood and Raveneye. It’s Crystal Bay and the Sleepless Mountains. The craziest the naming conventions get are the Battle Plains of Talus and The Shivering Expanse, but I still won’t roll my eyes at that. It’s a relief to be able to pronounce everything sketched onto a fantasy map for once.

But the map is little more than a playground. There’s no lore to be found here. There’s not much of a pre-existing world. There are shallow caverns to explore, insanely tall pine forests, especially for a video game, and deep lakes. It’s got evenly spaced fast-travel towers and a few naturally occurring health pools and mana pools of magical water. Orc encampments are randomly scattered here and there. But none of these things has a reason for being, other than for you to exploit its resources, or just to make you juke left and right a little bit when you’re headed out to gather more sticks and rocks. You can easily fend off the lone fairy or grizzly bear. But you’ve got to run for a while if a giant catches your scent, fee fi fo fum. Or if it’s a dragon that happens to smell the blood of an Englishman. 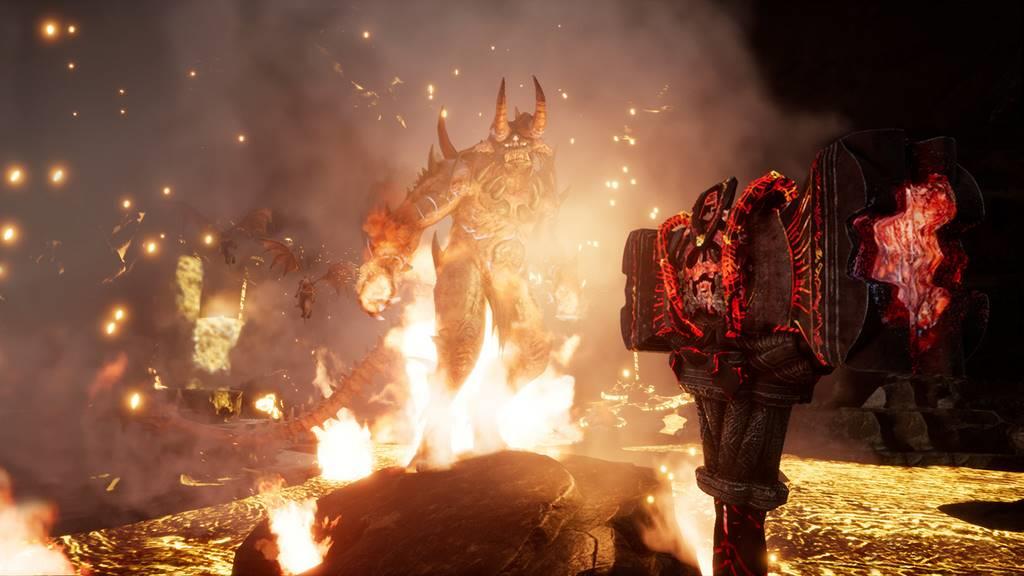 There’s no arch-enemy coming after you and yours. There’s no horde of bad guys sweeping through your server every seven days to wreck your stuff. There’s no impetus to continue building anything in Citadel aside from the simple pleasure of building things.

But I’ll tell you what: sometimes it’s nice being able to log into a game and just build something. I’ve been doing it for weeks now and, sometimes, it’s enough to keep me logging in, day after day. Eventually, though, it gets lonely, even on PvE servers. On a 50-person server, I’ve logged in some days when the server is almost full, yet never saw another soul. Now, 50 people isn’t a lot, and the map is a fair size, so I understand. Instead of seeing people, I’ve just become familiar with the other player-built structures rising up around my own home on the shores of Raveneye. “Oh look,” I say, logging in on a late West Coast evening, “looks like my neighbor on the hill got another tower going.” And then I’ll look the other direction and notice, “Hey, my other neighbor must’ve abandoned that place, because the building is incomplete and hasn’t been touched in weeks.”

Then I head into the forest, those wonderfully thick forests, and magically siphon wood and stone from the land (my spells have taken me beyond my baby days of picking up individual sticks and stones), and I add, perhaps, a string of watchtowers to my own citadel. I pick on a giant to get him to chase me and hopefully attack my citadel, just to test its strength, but they never do attack my structures. They hurl stones at me, but they’re oddly respectful of the stuff I build. So I exploit their fairness and dip behind my fortifications, filling the giant with a hundred fireballs until it finally goes down. That’s a fight I never would’ve won out in the open. 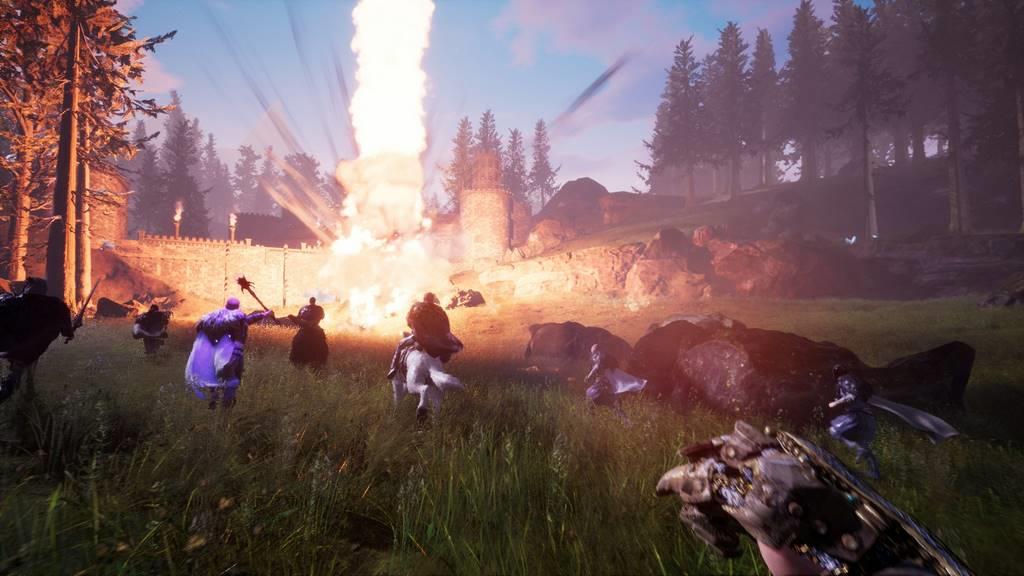 Those are all part of the Early Access experience. The AI is clueless, but the building mechanics are snappy and mostly glitch-free. My handcrafted health and mana pools worked perfectly the first day, then never worked again. I built one home over the water, but the floors wouldn’t load in until last, so whenever I logged in, I always came out of the loading screen half drowned in the middle of the lake, my lake home still not fully materialized.

And so on. There’s stuff like that every day. Every single day. But it’s getting better. The developers appear to be chugging away, and every change they’ve made so far makes sense, at least to me. So I’m not going to fault an Early Access game for being Early Access. I’m just letting you know, in case you have a zero-tolerance policy when it comes to that kind of stuff.

But it’s enjoyable. Shallow but enjoyable. Trust me, I’m not somebody that needs two million inventory items and three million recipes to keep me happy. I’m the exact opposite. But Citadel has a ways to go before it fills in all its holes, especially when it comes to the tech trees and crafting recipes. There are sizeable gaps from one thing to the next that can only be solved by running out, picking up sticks and rocks, and slapping them together in an endless Winchester House building project. 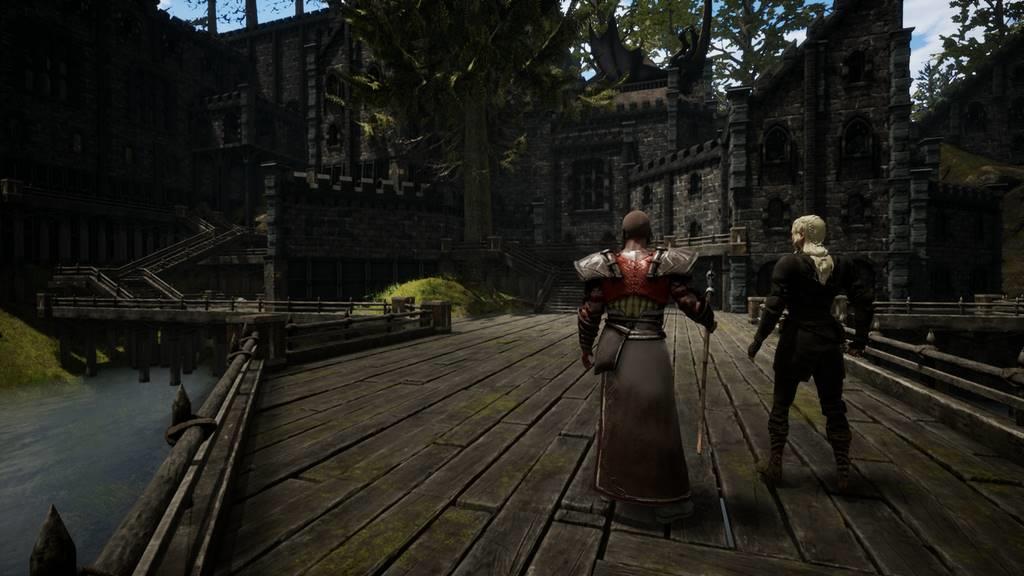 Sure, I was skeptical of the Harry Potter-ness of it all. At least at first. I’m increasingly from the get-off-my-lawn generation. By the time Barnes & Noble started hauling in J.K. Rowling books by the truckload, I was already past the “young” in Young Adult Fiction. Nobody wears a pointy wizard hat unless your God-given name is Gandalf the Grey. The only thing waving around a wand is Mickey Mouse, and he sure as heck better be starring in Fantasia when he does it. Also, unless you’re a Halloween decoration, you aren’t going anywhere with that witch’s broomstick between your legs.

That being said, Citadel has an undeniable charm to it. It won over my Old Man Yells at Cloud ways. Yes, it looks odd having six inches of wood extending out of your left hand when you fly on a broomstick. No, I’m not exactly cosplaying with a wide-brimmed dunce cap to the next San Diego Comic-Con. But within the very wizardy confines of Citadel, it’s neat. The bare bones of a good game are here, even if the fiction and the aesthetic is all over the place, once you skip past the boy wizard stuff. I’m looking forward to how Citadel: Forged With Fire fills out. Once there’s a reason for all these creatures to be here. And once there’s a reason for me to keep building all of these bigger and bigger citadels.