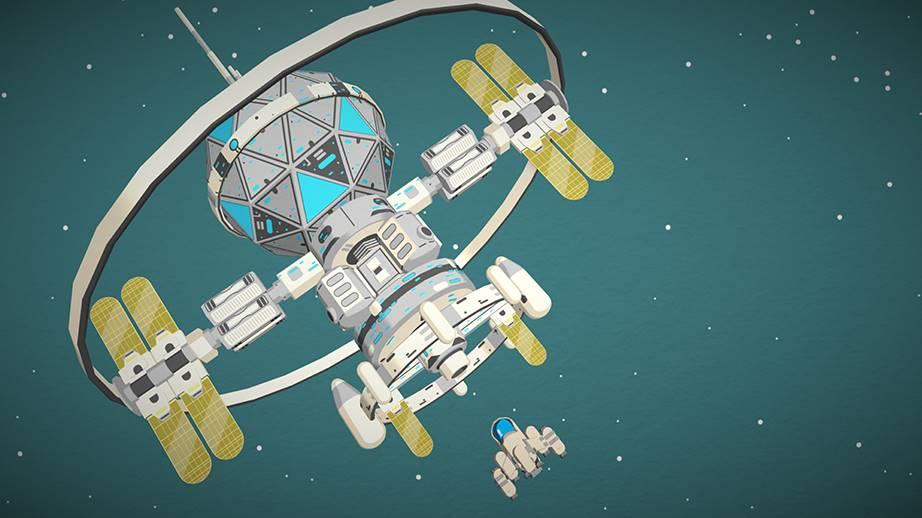 When Vostok Inc. first landed in my lap to review, I didn’t know what I was in for. I’ve never much been one for money-making games, particularly because I enjoy story-driven games with a set end, so imagine my thought process as I wrote down my first note which was, verbatim, “Very capitalist. Umm.”

However, I’m surprised (and a bit confused) to report that this game has eaten far more hours of my life than were actually needed for me to complete this review. While the genre of the game is a bit of a tired one, Vostok Inc. puts a neat twist on the premise that makes it not only playable, but enjoyable—even for someone like me.

You start as a little baby CEO of Vostok Inc., working your way up from relative rags to absolute riches with little regard for those who stand in your way. This callous disregard for the lives of others runs rampant throughout the game, and is in fact a core element of the game’s slight plotline. (I use slight here not as a criticism but simply as a comment, because if the developers tried to inject too much story then it would become too unbalanced for the genre and result in a game that doesn’t really know what it is.) What are the many different ways that you can casually throw someone’s life away in the name of Moolah, you might ask? Good question! In your enterprises, guided by the annoying Jimmy Goldman (who I’ll get to later), you’ll be building extractors, blasting asteroids, polluting planets, invading galaxies, and even killing natives. How fun!

I naturally shied away from the whole thing at first. On a personal level, invading someone else’s home and murdering them in the name of personal gain just skeeved me out. Besides, stuffing their planet chock full of polluting extractors (which consist of buildings ranging from mines to farms to plants to government buildings, and can be purchased for increasing amounts of Moolah that correlate with how much Moolah they will generate for you) really seemed like a kick in the teeth above all else. But being the core aspect of the game, I had to give it a try, and what I found surprised me. Moral quandaries about the whole matter aside, I think the whole reason that something like this works is because it knows it’s not a good real-life practice to be so blatant about invasion. The entire game felt like a commentary on the nature of capitalism, but I surprisingly didn’t feel like I was being lectured, which was lovely. 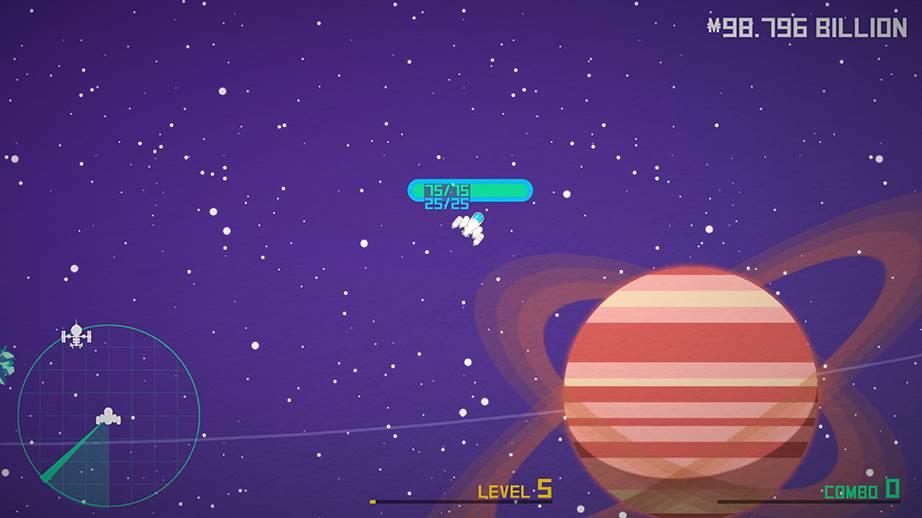 Allow me to explain. When you land on a planet, you can place any number and combination of the aforementioned extractors that you want, and the only limit is your budget. For the purposes of this example, let’s pick the Power Station. Once you purchase one for whatever planet you happen to currently be on, five upgrades unlock that each raise the amount of Moolah generated. Each extractor has its own set of five upgrades, each one raising in price, and they stack. The Power Station in particular has upgrades like Nuclear Generation, which has a description as follows; “Excellent! Nuclear Power Plants are compact and generate a huge amount of power (with only a slight risk of a catastrophic meltdown). These plants will have you rolling in Moolah for thousands of years (which, coincidentally, is how long the waste will last…!)” Or, for more money, you can purchase the Smart Meters upgrade; “Install ‘smart’ meters in your customers’ homes to calculate exactly how much energy they use. Then charge them double for the privilege!”

(On that note, I would like to put forth a comment that has no real bearing on my review other than the devs’ creativity. The Fast Food Restaurant extractor has an upgrade called Soylent Special. The description reads, “Green is good! And there’s nothing greener than our new Soylent burgers! Contains 100% of the nutrients the human body needs! Remember kids; recycle!”) 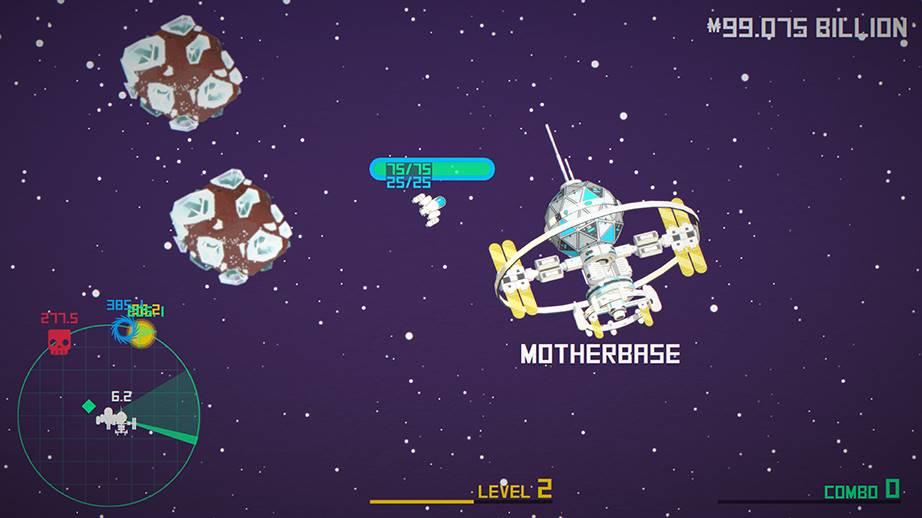 Want to know what else is unnerving? Jimmy Goldman. A representative of Vostok Inc (and in fact, the artistic rendering of the very same man you encounter in the game’s trailer) calls you in your spaceship every three seconds, presumably from his cushy office back on Earth. He just…smiles. Sure, his mouth moves, but all that comes out is gibberish with subtitles, and his expression never changes. He just stares out of the bottom right corner of your screen and gives you advice that’s pretty helpful the first time, but starts grating on your nerves by utterance number 47. I know, Jimmy, I know that my shields were depleted. I know that enemies spawn with lower levels right after I’m killed. And I can only take so many repetitions of your punny stock updates.

While we’re on the topic of negatives—and, in fact, Jimmy’s words in general—let’s get into tutorials. Jimmy serves as a perpetual tutorial whether you like it or not, which is helpful. Mostly. The game is fairly simple so it doesn’t need a ton of explanation, but navigating the menus took some practice. Specifically, the weapons menu gave me a bunch of trouble. Jimmy mentions that you can buy upgrades for your ship and radar at Motherbase, but doesn’t go into specifics. I was left floundering in the Weapons menu, and I’ll admit it; I didn’t realize you could combine weapons until I actually started writing this review. I would have liked a tad bit of hand-holding in the menus.

It’s also important to mention that I was playing on Xbox One. This game, while being an aggressively capitalist moneymaking venture, is also a 2D shooter. People are going to come after you for invading their homes and messing up their planets. Fact of life. On Xbox One, you steer with the left stick and shoot with the right. If you’re an Xbox One player, you already feel my pain, but if you’re not allow me to explain to you just how hard it is to aim at the enemies surrounding you while you’re already moving to avoid them—specifically when you’re trying to aim using a 2D top-down interface, and there’s no on-screen cursor to guide you. There is a ship upgrade you can buy at Motherbase called the Targeting Computer, but it costs $1.000 trillion dollars, an amount that I only made after crossing through four galaxies, which takes a long while. It’s kind of a pain having a solution seemingly so close, but truly inaccessible for most of the game.

(Course, that could just be me sucking. Decide for yourself.) 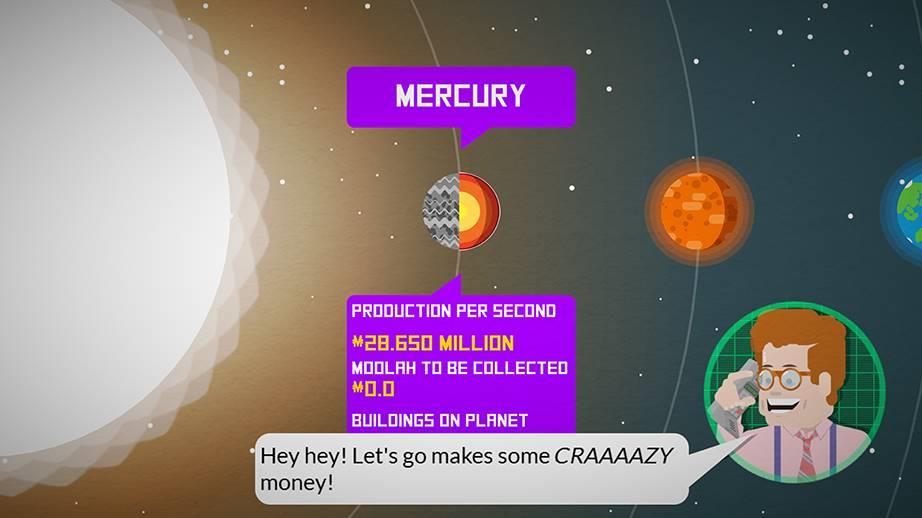 Another notable mechanic in Vostok Inc. is the rescuing. This is arguably the most necessary optional upgrade in the game; once purchased, you can see blinking yellow triangles on the radar that shows you where some sort of manager is floating in space, waiting to be rescued. If you get there before they run out of air and die, you recruit them. It’s very useful; all types of managers give you some sort of bonus. You can get an investor, who matches your current balance 100% one time and then basically vanishes into the ether. You can get an advisor, who boosts your productivity across all planets for a set amount of time and then basically vanishes into the ether. You can get a middle manager, who gives you a 3% bonus on your earnings (which stacks, because you can have multiple middle managers at once) and sticks around until your ship inevitably explodes in battle somewhere (because there’s not enough room in your escape pod) and then they basically vanish into the ether. Then there are the executives.

Executives, being executives, get a space in your escape pod, so they stick around forever. When they’re happy, they give you some pretty decent bonuses, too. However, keeping them happy is an absolute chore. It’s nearly impossible to keep all of them happy all the time, especially as you start rescuing more (though there is a set cap, and they spawn much more rarely than the common middle managers). You have the chance to pick up supply crates from destroyed enemies or asteroids, or even to get them by playing a retro minigame unique to each executive, and you can give them to the executive of your choice to keep them happy and thus get yourself higher bonuses. Thing is, their happiness plummets. They get unhappy faster than you can find jetskis or panda steaks to give them, and once you pass a certain point it’s like you spend more time trying to please them than you do actually playing the rest of the game. I basically had to resign myself to having miserable executives for the rest of my life, and only then did I feel like I was able to focus on and enjoy the rest of the game. 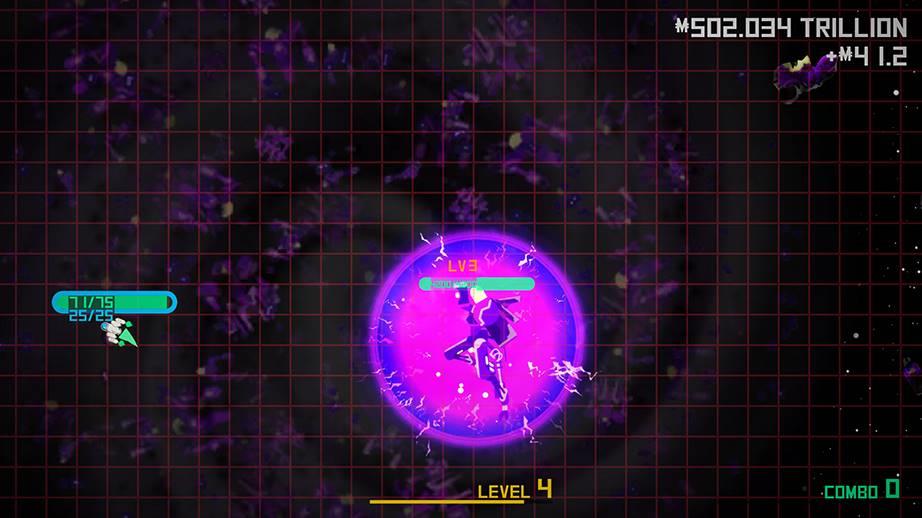 And the worst part? Time still passes when you’re in the menus. This means that, even though you continue to earn money, your executives continue to get more and more pissed off because they haven’t gotten a yacht in the past ten minutes.

In terms of other mechanics, though, I don’t have many complaints. The in-game achievement system, for one, is such that they are all hidden at first, but as you unlock them the surrounding ones get revealed so you know what to aim for. This isn’t the type of game where achievements are few and far between, either; you’ll get them, guaranteed. It even has a little icon to tell you which achievements will give you Gamerscore, or trophies, or whatever type of award you get for your respective platform.

So, Kinsey enjoyed a money-grabbing game. The world can officially end now. I will admit, though (especially as someone who definitely needs to work on her saving habits), that there is definitely something satisfying about watching that number in the upper right of the screen just skyrocket, and know it’s all because of you. (So long as you manage to overlook the fact that you’re one of the most immoral CEOs in the business.)

The unique premise of Vostok Inc. breathes new life into the tired genre, making this moneymaking game much more than something to just play on the toilet to pass the time. While it’s definitely not everyone’s cup of tea, I urge you to give it a chance if you’re on the fence; it definitely didn’t seem like my cup of tea either at first, but the embedded humor and interesting mechanics made it relatively easy to suffer through the annoyances.

Except Jimmy Goldman. That guy sucks.