“Writers writing about writing.” It’s a meta-cliche among, you guessed it, writers. It’s a meta-cliche where self-gratification and the imperative to Write What You Know meet and often give each other a clammy handshake. While Pyre is not writers writing about writing, it’s entirely a game that fetishizes a writer’s tools of the trade. Pyre mystifies the production of literature, deifies collectors of books, and makes the art of reading an answer to a person’s highest calling.

Yes, Pyre also happens to be a slick little soccer/muckle/NBA Jam Fest couched in a party-based role-playing game. There. Now that we have a few convenient labels to work with, go ahead and ignore them, because Pyre carves out a one-of-a-kind category for itself.

You, dear reader, are a Reader in the land of Pyre. That alone uniquely qualifies you to read not only books, but stars. Those that can read the stars can follow them to where the Rites take place. The Rites are games in which the characters form two teams of three and face off against one another in those purgatory-sponsored games of soccer/muckle/NBA Jam. You’re competing against other triumvirates for your freedom. You and everyone else in the Downside has been banished here, living out a life sentence handed down for your crimes back in the Commonwealth.

Your crimes and the crimes of your fellows are for you to find out. Because learning people’s stories—learning your own story as a gently-fourth-wall-breaking character within Pyre itself—is all part of the game’s dopamine drip feed.

The gameplay loop is simple enough, if we, again, want to oversimplify what makes Pyre so loving and so loved. The loop goes: compete in the games, level up skills and abilities, trade a handful of goods, read the lore.

That’s it. We could end the review right there, if Pyre didn’t continually yet politely sidestep every one of my expectations. Which it does. If you’ve ever been, say, sad about the state of story modes in fighting or sports games, then Pyre is a bold antidote to that problem. Pyre is Extra Essential Super Story Mode, that happens to have a cool sports-combat game inserted in the middle.

The games themselves, the Rites, as they're called, are a modified game of Muckle (or, the name variation I like even more is “Kill the Guy with the Ball”), where your player grabs an orb, runs to their opponent’s side, and dunk the orb into a vat of liquid fire. Your characters actually dunk so hard that they’re extra banished for several seconds before they can rejoin your team on the field.

In the thick of it, it’s possible to lose track of the ball. It happens to me every once in awhile, where I think I’ve got the orb in hand, but it’s sitting on the ground a few yards back that way, and I’m trying to do a touchdown dance but nothing is happening. Yeah, that’s because I’d taken my eye off the ball at some point and it was no longer in my possession. Slowed-down key moments give your eyes a second to keep your eye on the ball, though.

The Rites are challenging to learn, simply because the rules seem at once familiar and altogether alien. By the time I’d reached the first ending (if I may call it that), I was finally getting proactive with my tactics on the field rather than just zombie rushing the goal.

Don’t let that in-game game scare you. I had doubts, too. But the Rites are all part of that master plan to make Pyre dodge your expectations a little bit, by turning what looks like it could be typical JRPG combat into a real-time way to ball on your rivals. You line up on the left, the enemy lines up on the right, but that’s where any semblance of traditional Japanese RPG combat goes away.

So, welcome to the Nightwings, a motley crew wearing the colors of some other former motley crew. Who knows how long these capes and cloaks have been passed down. The only thing you know is that you and your teammates wear them now, and you’re going to have to win several matches to earn back everyone’s freedom.

The snippets of made-up language put you in a foreign place. You can certainly read and comprehend the written subtitles, but now you’re also paying attention to the tone of the spoken words. You’re likewise paying attention to the sometimes subtle, something un-subtle mood shifts of the people you interact with. Sometimes laughter is accompanied by the sound of someone slapping you in the face. Sometimes anger is eased when someone closes their eyes and takes a deep breath. Sometimes the perfectly cued music clues you in.

The animation is buttery smooth. From the whispery sway of unidentifiable plants in the wind, to the golden light playing off the rounded hills, or the liquid smoke still pouring out of the nostrils of some ancient, fallen titan. No hitches during the Rites, either, most importantly. Characters’ animations are intentionally primitive during dialogue scenes, but you won’t be able to count the frames-per-second during a round of Kill the Guy with the Ball.

In my first real match, subtle strategies became immediately apparent. Do I grab the ball and run or let the opponent pick it up so I can immediately smear them? Do I advance everyone slowly across the field or send my speed runner out alone? Do I blast one of their inactive players or use that time and energy to flip into the end zone?

Supergiant Games, for the amount of tender loving care they put into their game, will always ask you to take a little time to learn the skills to get through their combat. It may not sound like they’re asking much, but I was challenged. Supergiant wants to test your manual dexterity, your moment-to-moment coping skills, and your willingness to build, strike, and rebuild different strategies on the fly. After a dozen hours and a dozen matches, I haven’t lost yet. Though I imagine the loss will sting when it inevitably sets in.

The conversations you have with your team before a match can instill or diminish their hopes. It’s not like you’re giving pep talks either. The conversations are intensely personal, even when it seems like very little is revealed. But one by one, you get to know your people, you get to know your rivals (they’re not all bad guys, not at all), and you learn more about the puppet masters pulling the strings; the ones who sent you to this arcane purgatory in the first place.

It’s a brilliant Oregon Trail of a journey, if Dr. Seuss illustrated the sights along the way, and if unlocking backstory were as important as unlocking combat abilities.

You travel a surreal and unknowable land. In the background lies the sweep and swirl of painted hills and rocky terraces, the bones of beasts the size of mountains, and seeming moons brought down to crush them. Or you hear the skittery snoring of creatures sleeping in bowling-ball-shaped homes, the landscape looking like it’s stuck in a Banner Saga fever dream. (The Banner Saga is another gorgeous game that earns rightful comparisons to The Oregon Trail.) 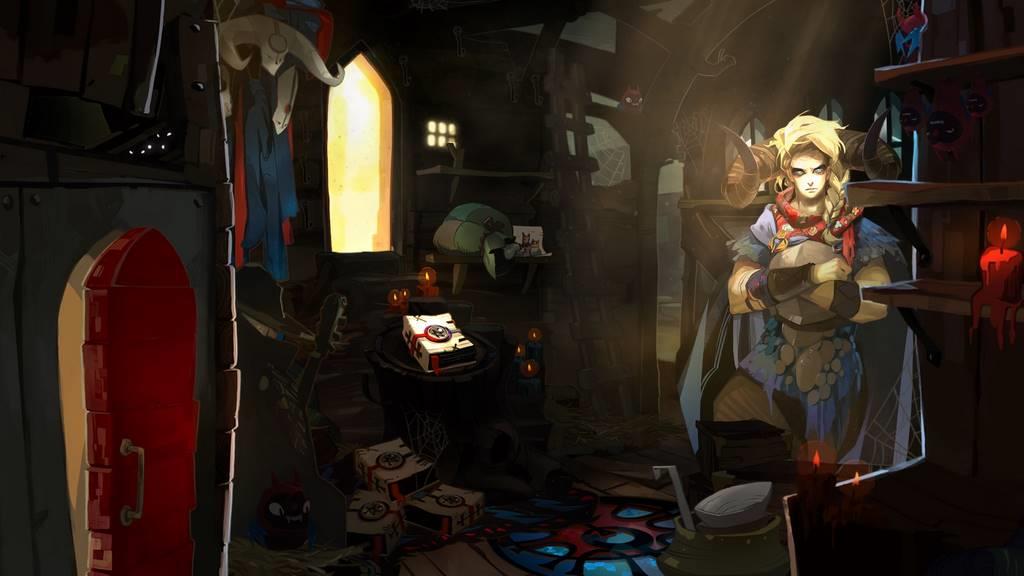 There are times when I’ve forgotten exactly why we’re all here. I mean, here in the Downside. I spend so much time looking after the well-being of my friends, honing their skills, and equipping them for success, that I forget to ask the important questions. Why are we here again? Is my banishment to the Downside rightful and just? Is it rightful and just for my companions? Oh, and by the way, what would freedom look like if I was released back into the Commonwealth anyway? Did I ever think about that, smart guy?

Pyre is what happens when you take a dozen developers and bring out the very best in all of them. The artwork: beautiful. The music: beautiful. The storytelling: beautiful. The way all three of those elements weave seamlessly into the gameplay: indescribable. The freedom you and your comrades seek in Pyre is a worthy goal. But the freedom you give each other to eventually open up your stories to one another is even better.

Pyre teaches you to fight tirelessly for your freedom, but to question the definition of that freedom as well. I like the sports-combat a little more each time I play. And Pyre fetishizes the tools of the writer's trade, but more importantly focuses on the art and dialogue of good storytelling.