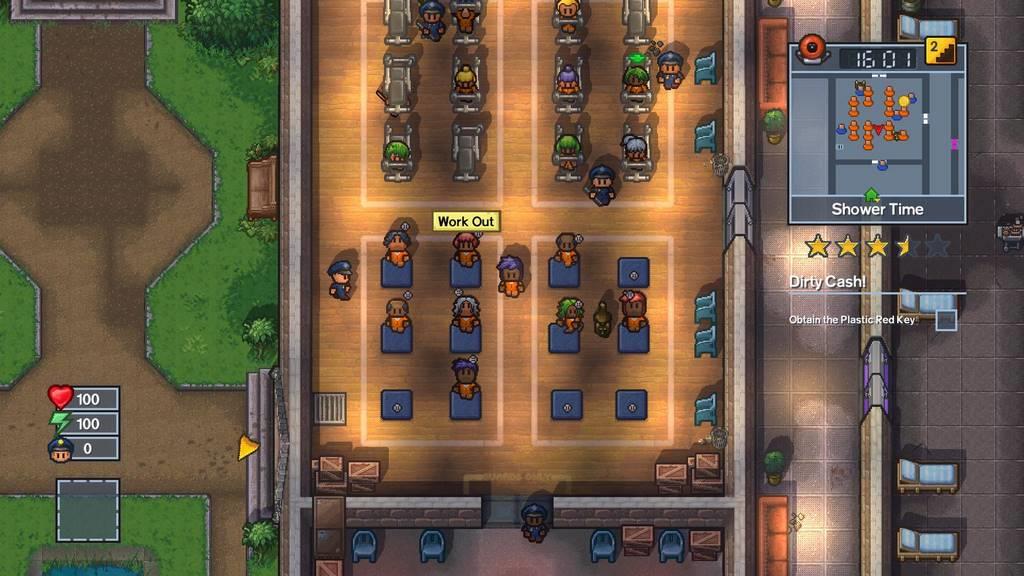 I used to read a lot of nonfiction as a teen. One of my favorite subjects was WWII POW escapes. Tunnels, disguises, single escapes, group escapes—I read them all. I’ve also seen or read my share of prison escape stories. I’ve even been to Alcatraz island. One would think that a background like that would make me a perfect candidate for a prison escape game called The Escapists 2. Yes, the "2" indicates that it’s a sequel. I missed out on the original The Escapists, but I didn’t think that would hamper my progress too much when it came to trying my hand at the newer version, what with my decades of interest in real world examples.

Sure, I started out with the tutorial, which I struggled with. “How,” I asked myself, “could I fail at the tutorial?” Clearly I had forgotten the three times I died during my introduction to Insurgency, but that’s a story for another time.

My problem with the TE2 tutorial turned out to be exactly that: my problem. I hadn’t noted (nor, to be fair, was I told) that the E key performs two functions, depending on how long you hold it down. The desk in my cell, for example, is opened with a very brief tap of the E key, but a longer press is for actually picking up and moving the desk. Even having eventually figured that out, I still failed the tutorial on the last step when I broke my shovel. Sadly, that ignominious failure shines supreme as the closest I have gotten to breaking out.

I hurry to add that my failure to escape after hours and hours of working at it does not mean that I am not enjoying the game. The depth to which I have become at least partially institutionalized is actually a minor concern of mine these days. There’s something to be said for a consistent and predictable routine—I don’t have to decide what to wear, when to eat, how long to stay up in the evening, or any of a plethora of the decisions we are faced with on a daily basis. Still, the name of the game is escape, so I have to try.

Before we get to that, though, allow me to walk you through a typical day in prison, or at least this cleansed version of it. 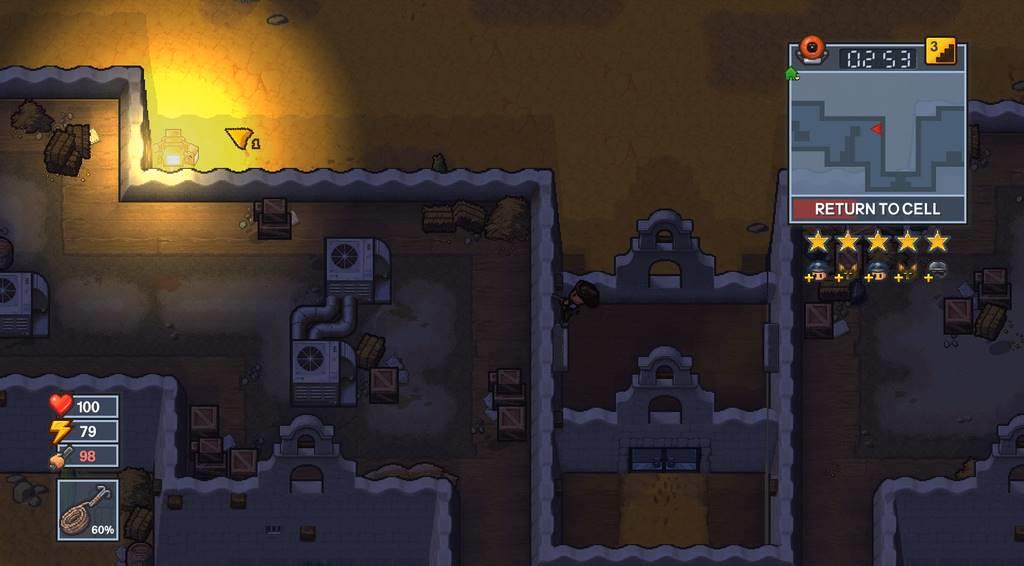 The day starts at 7:30 a.m., which after a decade of getting up at 4:15 a.m. to get to the other side of town for work before the roads get clogged, seems overly luxurious to me. Upon wake up, we are all expected to meet for morning roll call, an event made even less palatable than you would imagine due to the collection of demeaning insults thrown our way from the team of guards. The rest of the day is filled with three square meals eaten while guards beat down recalcitrant inmates between the tables, mandatory exercise time, work time for those who have secured cushy jobs as trash haulers or other mundane tasks, and generous amounts of free time. It’s a tiring day of grinding repetition, so evening roll call is almost welcome.

As an inmate, I can choose to skip the mandatory roll calls and meals, but doing so comes at a cost in the form of building a bad reputation with the guards. That can make them more suspicious of my activities, though, and for one preparing to escape, well, additional attention is most assuredly not welcome.

For the first few weeks (of in-game time, which passes as roughly one minute of game time per one second of real time), I used my free time mostly to work out in the exercise room to build my strength and fitness, both of which would help me should I get into a fight or need to run away from one, or going to the library for some reading to improve my knowledge. Gaining knowledge is important when it comes to knowing how to craft items that can be used as offensive or defensive weapons, tools for digging holes, cutting through fences and vents, or making various props used to hide those other activities. The trick with crafting, though, is not only figuring out how to craft an item but determining what to craft. There's no book of recipes, so the best I was able to do was scan the list of low-intelligence items on the craft screen to see what was available, then try to imagine how they could be best used.

One thing I learned when I looked into crafting is that I would need to gather up a lot of items that could be combined to make things that were greater than the sum of their parts. Some of these items were innocuous and could be carried openly or just left in the desk in my cell, but others were considered to be contraband and had to be hidden more carefully. There was a hidden section in my desk for the illegal stuff, but it wasn’t very large. I had to be careful what I kept. I could always dispose of things I didn’t need or didn’t want to be caught with by flushing them down the toilet in my cell. That caused the toilet to back up and flood my cell once, but I didn’t face any repercussions from that so I kept on doing it. This too is an area where my virtual prison life was a little easier than my real-world life, where clogging a toilet is distinctly frowned upon. 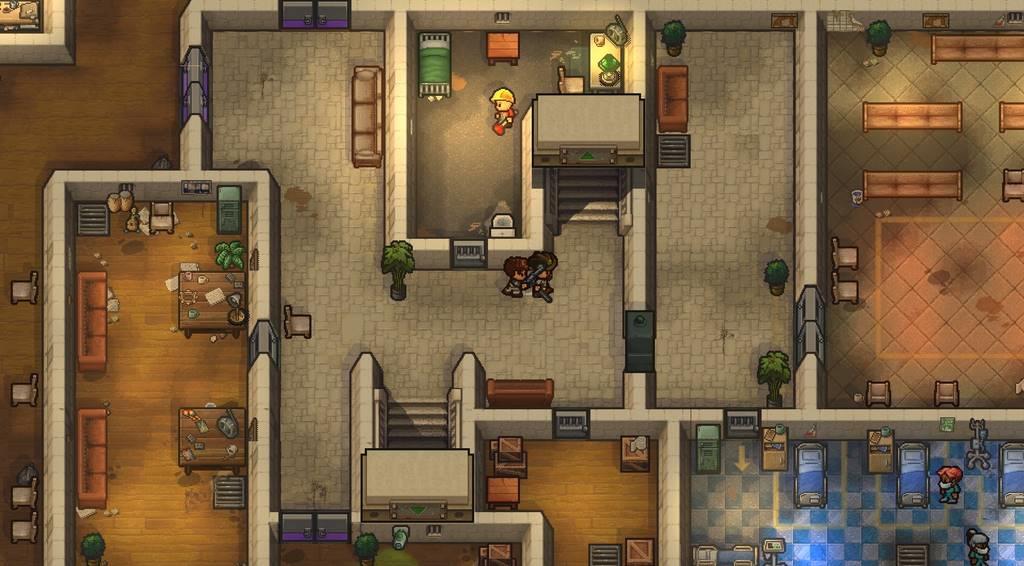 The question I then faced was very simple: Where do I find all of that stuff I would need to make things? There ended up being more than one way to do it, but my favorite tactic was also the safest and easiest: While other inmates were off doing their jobs or wandering the hallways, I went into their cells and searched their desks. I found a whole lot of stuff that way. I even managed to craft a few things, although the nun-chucks I fashioned out of purloined items eventually led to me getting a beating that put me in the infirmary for most of a day. Perhaps a philosophy of pacifism would serve me better, despite my bulging muscles. My well-educated brain was going to have to be my weapon of choice.

Despite my consistent failure to escape, I still hope to figure out a plan for getting out of the place. For now, I’m content to keep up my daily routine while looking for an opportunity. I have a job in the trash incinerator room that’s putting a little money in my pockets, but it’s pure drudgery. A lot of the other prisoners have been offering money to do various tasks for them, but I’m still pretty sore from my first beat down, and many of the requests from other prisoners sound like a great way to get another one. My current project is to fashion myself a nice pair of wire cutters—with those in hand, I will be able to get up into the ceiling vents and use those to get into off-limits areas to see what opportunities arise there.

There is another possibility, though. TE2 allows for online and local multiplayer. It has two modes: co-op and versus. Versus is exactly what it sounds like: You and your opponents share the same prison, but each of you are trying to be the first to escape. Given my utter lack of success in that endeavor, I think I would have to adopt a strategy of shadowing an opponent with the hopes of overpowering him just before he makes his break for freedom. Knock him out, steal his escape. What could go wrong? 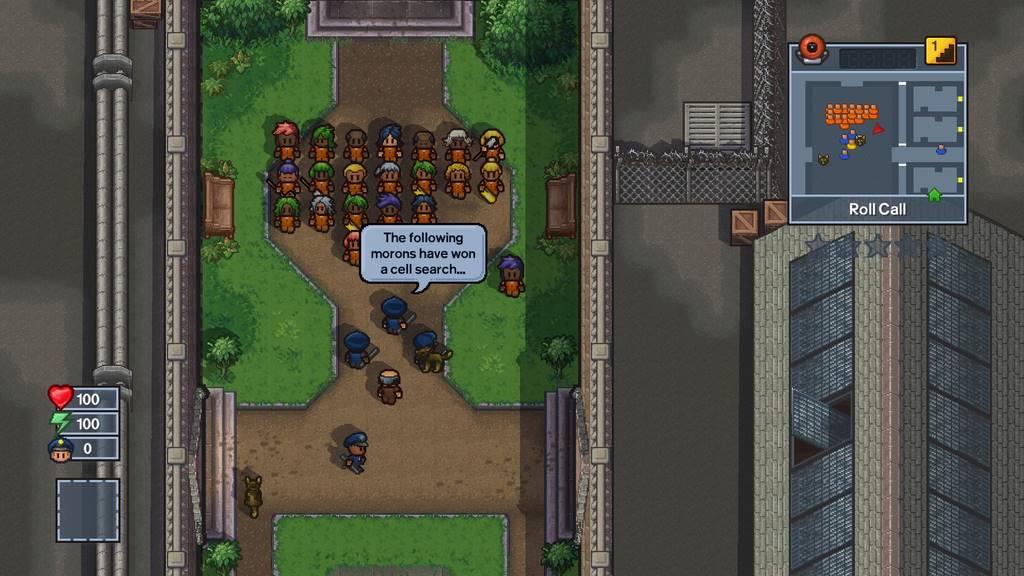 Co-op might be a better choice, but only with a player that has a better mind than mine when it comes to envisioning and enacting a plan. The way in which the co-op mode was designed is interesting: A co-op player can seamlessly drop into your prison, do this and that for as long as he wants, then drop right out again. Your prison life will plod on whether he ever comes back or not. That helps mitigate one of the larger challenges with co-op: getting schedules to coincide. With this design, you can go ahead and play whenever you want, whether your co-op buddy is available to play or not.

So, here we are. I have to do something awkward. I have to finish up a review of a game that I have utterly failed at. On the plus side, however, I can say one of the nicest things a reviewer can say about a game: I will continue to play this game long after this review is done. I think I’m on the right track with my strategy. I’m very close to having the pieces and parts I need to craft a robust pair of wire snippers (there are three grades of quality, mostly having to do with the longevity of the tool) and a batch of paper mache. The snips will serve two purposes in that they will enable me to cut open the grill over the ventilation duct that passes over my cell, and they could also come in handy if I need to cut through a fence. Getting into the ventilation ducts will enable access to off-limits areas of the prison. My hope is that I will be able to find a wall or floor I can tunnel through to eventually escape. The paper mache will allow me to create a faux vent cover to fool the guards into thinking that the vent grill hasn’t been adulterated.

Prison escape, it seems, is one of those situations when you don’t want to show your work.

Wish me luck, I’m going to need it.