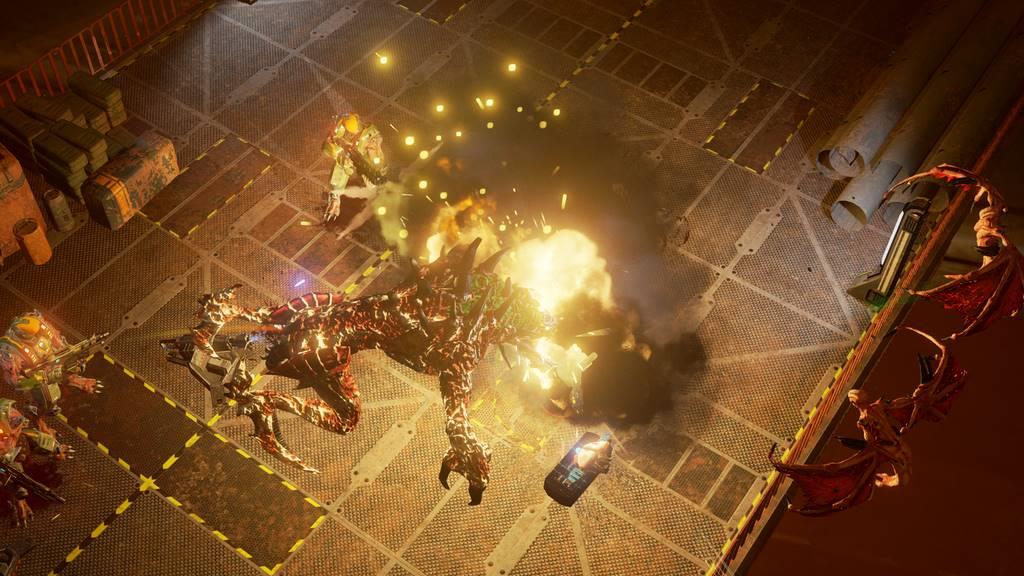 Written by Patrick Aloia on 8/1/2017 for PC
More On: Solstice Chronicles: MIA

In the middle of my second playthrough of Ironward’s new top-down shooter, Solstice Chronicles: MIA, a sort of sequel to The Red Solstice, a Warhammer mod/RTS, I stopped playing because I knew everything I wanted to say once I killed one of the game's main baddies again. My eyes glazed over as he railed against humanity, praising the disease that corrupted him but killed the rest of the human population on Mars. There was no reason to move forward and try to understand more of this game when it wasn’t trying to say anything interesting. While the story in MIA is devastatingly bland, the real issue is that everything around it is bland too. There's a difference between a game "doing exactly what it needs to do" and a game that feels like it was made with that exact thing in mind. You can feel MIA scraping the bottom of the barrel, exhausted with the idea of busting through the bottom and digging up something more interesting. We’re left with a vaguely competent top-down shooter not worth the full price of admission.

In MIA, you play as a faceless grunt simply referred to as Marine, the sole survivor of a massive plague that wiped out the humans on Mars, and incited the rise of alien-zombie-esque creatures. You also have a robot drone sidekick named Saffron who helps you on your mission to find other survivors, and eventually, stop the plague from spreading to Earth. It's a set up that resembles Doom, but trading that franchise’s pulpy fun and pop for a blah matte finish of vague sci-fi.

The Marine uses a modest arsenal of weapons and an energy sword of sorts to cut through scores of creatures that swarm you throughout the game. You have upgradable perks and secondary weapons. Your weapons level up as you use them as well. This adds a marginal amount of variety even if a lot of the perks and character building in general feel largely inconsequential. The truth is, if you have ammo, and you have a couple of abilities (the block ability by Saffron is particularly useful), you’ll be sticking with those to help clear through the horde every time. 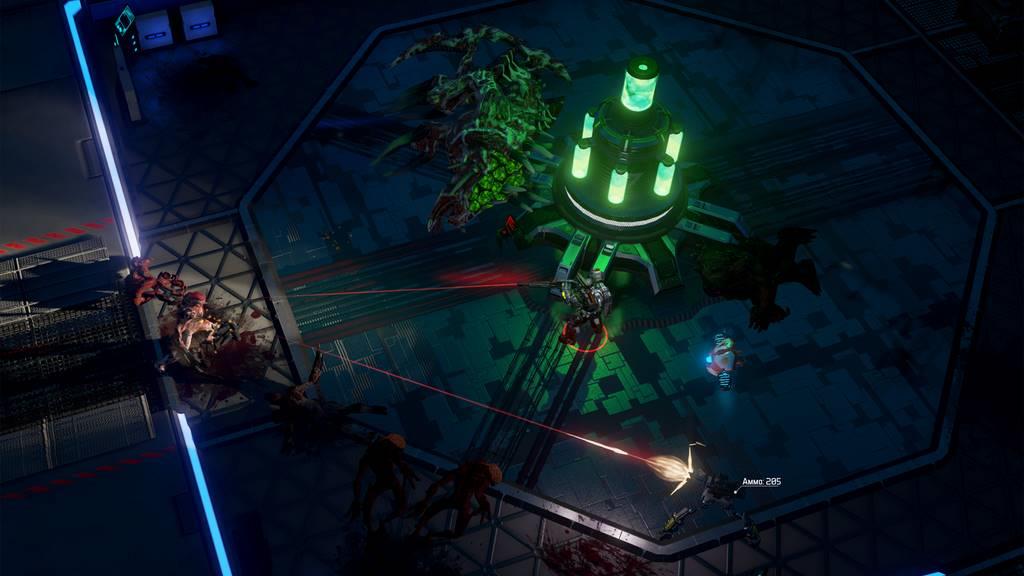 MIA tries to make managing the swarm a mechanic that the player can manipulate by using the "threat meter." The game explains the threat meter rather poorly, likely due to localization issues (there are… more than a few in the version I am playing), but it’s supposed to keep the player informed as to whether or not there is a credible threat in an area. However, since the swarms come during scripted moments in the game, and there isn’t much within the levels to inspire particular crowd control or stealth maneuvers, you’re left using the same pattern that works for each swarm. There are all these ancillary effects that your drone has to curb enemy growth, or to increase the number of enemies, but it never feels like that is happening when you input Block (that can freeze spawn points) or Scout (which is supposed to increase the threat level the more time you use it). The game itself calls for either the increase or decrease of enemies. MIA effectively took an interesting mechanic and made it into a weird, useless bar that sits atop the UI.

You will be facing hordes of enemies in MIA and it can be extremely satisfying to mow them down. The balance of these swarms are occasionally less than perfect (too many of one kind of enemy, or not enough of another to balance out the action), but overall the game is highly competent at pacing the enemies, making you feel like a badass when you pull out of a situation by the skin of your teeth. However, I manage all of these swarms, scripted or “unscripted,” anyway with one combination of weapons. Throughout the game, I used the Assault Rifle, turrets, and the drone Block command. This strategy was  usually be enough to keep the smaller guys at bay, and allow me to focus on taking out larger creatures. There wasn’t a situation that this strategy failed me, unless I had to move, but in that case, I’d just move. 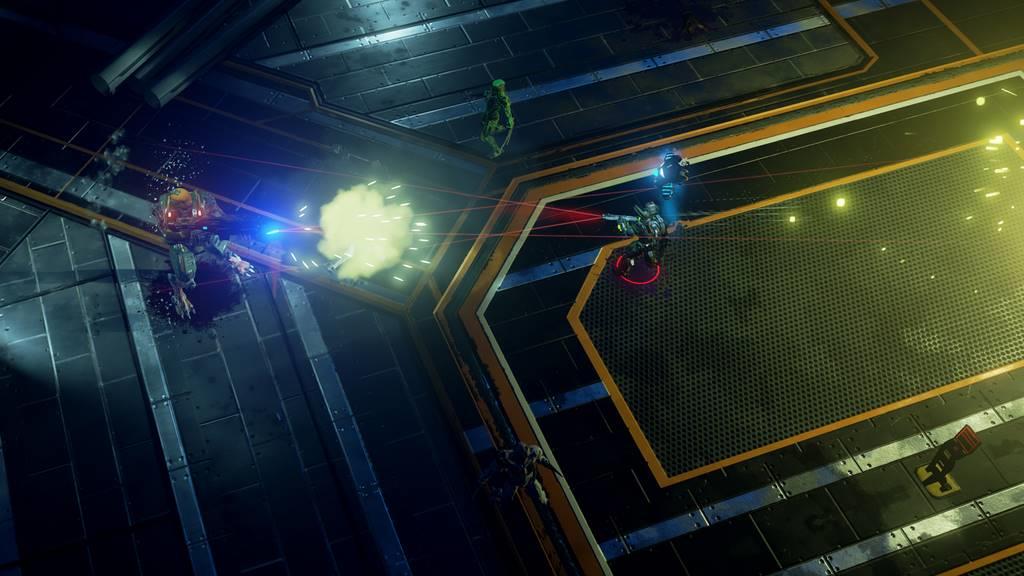 The game has an awkward storytelling rhythm and general rhythm of cutscenes, and use of music. The score is generic, which is fine, but it’s employed erratically, with stretches of silence that feel out of place, and moments of sweeping grandeur where the mood calls for something else. The game will fade in cut scenes at awkward moments, and then smash cut to the “end of level” screen. These small things take the already dull premise and make it seem not only like a lazily written story, but a lazily produced narrative, top to bottom. The sound design is weak, and the graphics are on the dull side. Graphics are something I don’t usually harp on, but when there is so little in the way of design or attitude or feeling, I’d at least like something that is slick, that feels like it nails its generic look. The weapons don’t pop, the creatures don’t screech or roar, there’s something so stripped down about all of MIA.

The game does do a solid job creating the balance for basic playability. Ammo availability is spaced out well and the swarms that come in are well paced, and encourage accurate slaughter. There are moments where you can mow down a hundred guys like a Dynasty Warrior captain, but you also need to be smart about when you unleash that kind of messiness, less you create an opening. MIA’s main virtue is its balance in this way, with nary a spike in difficulty that feels unfair. Even though its core loop is uninspired, it is playable, and easy to get into. Zone out and enjoy.

If MIA were cheaper, or had more interesting art design, or tried to say or do something different than other games like it, or at least leaned a bit more into some of the silliness it gestures at (the dialogue has the occasional quip that points to something the game could have been), then we’d have a something I could recommend buying. At its current state, it’s worth playing if you can get it for cheap. Go save Mars in another game.

If MIA were cheaper, or had more interesting art design, or tried to say or do something different than other games like it, or at least leaned a bit more into some of the silliness it gestures at (the dialogue has the occasional quip that indicates something the game could have been), then we’d have a something I could recommend buying. At its current state, it’s worth playing if you can get it for cheap. Go save Mars in another game.