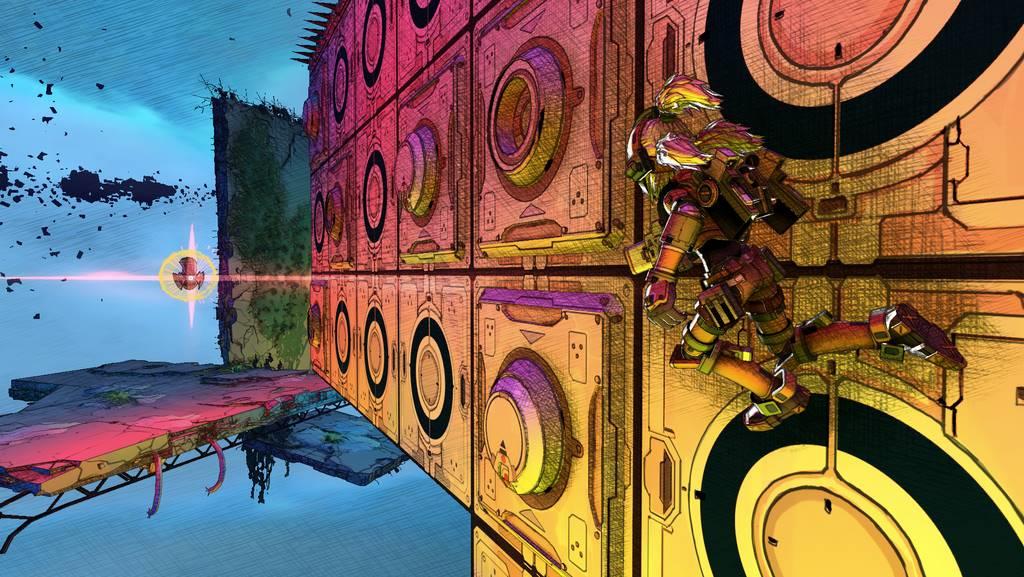 When my son mentioned the word parkour to me years ago, I thought he had heard some made up thing from another gamer and I passed it off as nonsense. I have come to find out that, not only is it real, but there are quite a few games out there that either incorporate it or use it as a core gameplay mechanic. Enter Super Cloudbuilt. The game is actually 2 games and both are good in their own right. The first game is where you enter and get a feel for the game. You gage the abilities and learn how to do certain things while listening to a little girl’s tragic depiction of something she really cannot remember. The second game is that of pure horror for those who aren’t parkour gods. A simplistic nightmare of walls, gunfire, angry sentinels, and spikes that make you kinda chuckle – realizing you cannot possibly do it.

So for staters, S.C. does lead you in with relative comfort. Learn the jump, wall-run, climb, sprint, boost, etc. The game then brings you to the hospital where you learn there has been an accident and you need to plow through memories to find yourself. Yourself, however, happens to be hidden behind many difficult parkour levels in this hospital of frustration.

The first door you come to is a “playground”.  This is where you can hone some of your powers of wall walking and boosting. This really is the “calm before the storm”, but is a good place to practice for a bit. It does NOT prepare you for the upper levels, but it is still functional for its duty.

The other doors in the building are the levels of her mind you must run through. There are pretty names for each of these hellish levels, but are named after situations that she must go through to get better. The first couple of doors appear and you have to get to the end of these before new doors to this “hospital” appear in new areas of the building.

As far as the gameplay is concerned, the controls are good but very loose. Running, boosting and sprinting starts out fairly easy to control, but once the levels go upward, there is a lot of finesse that has to happen to manage through some of the obstacles that impede progress. I can’t tell you how many times I’ve boosted the wrong direction into oblivion. There are a lot of impedes too. You’ll go from wall to wall but then straight up a giant wall that ends at an edge, then turn to get shot by a canon. There is more action with all of what happens than I can put on paper. You will definitely be on the edge of your seat for a good deal of the game and curse while doing a bunch of it. 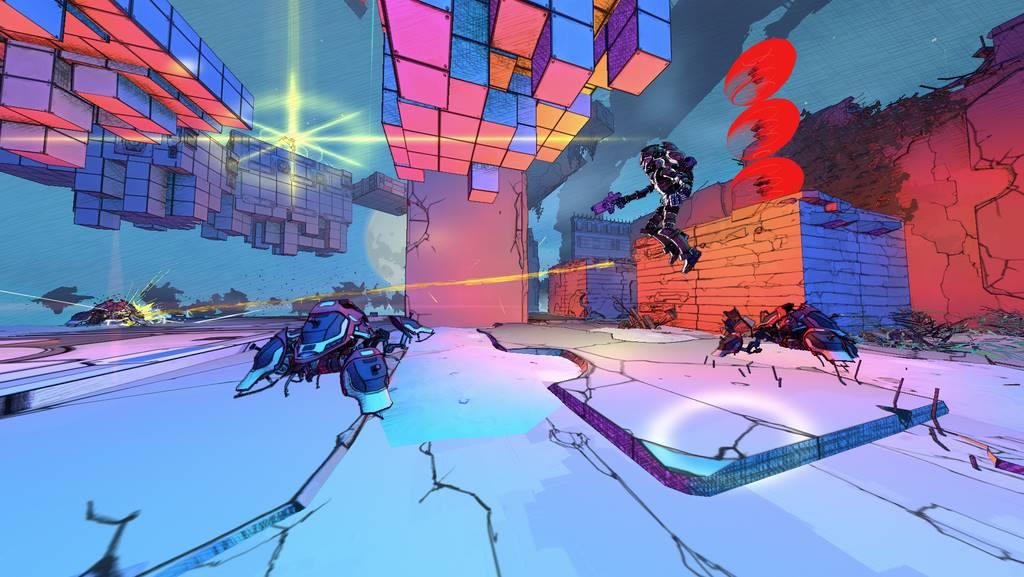 Adding to the level design frustration are a bunch of mechanical menaces. There are turrets that come in 2 forms – pistol or spray. There are red mines that usually cling to walls… they are indestructible and knock you to death when you hit. There are purple barriers that shock you when you touch them but are able to be destroyed with gunfire. Drones can also be activated when in their area and they can have shields that cannot be shot through. You dance around them until the shield temporarily fails. There are also electric canons that shock areas temporarily but will knock you off if touched. And finally, there are crawling bots that walk into you and shock you.

There are some cool things to help with this level of frustration. You get a gun that fires 3 different ways. Shotgun spray, handgun, or a grenade launcher-of sorts (the 'nades stick to a wall then explode). You also get bonus lockers at the end of every level (if you’ve collected the keys) that give you extra lives and hit points. There is also a locker in one of the lower parts of the hospital that replenishes your lives to full. This regenerates every 7 or so minutes. There are also checkpoints through the levels, about 2-3 of them AND you get to carry one with you from the start to put ANYWHERE. It also restores you to 6 lives if you are low. 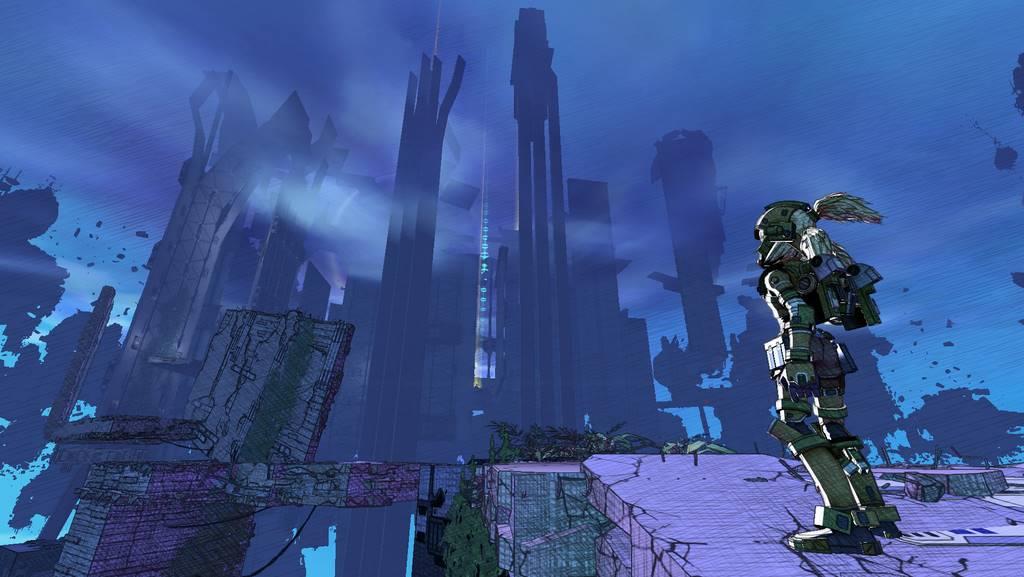 I have to say the design is excellent. The music is very pleasing and not horribly repetitive. There are a bunch of differing ones as well. The level look is very comic-inspired and pleasant – no matter how frustrated you get. The female is rather adorable – both in armor and pathetically, painfully recovering in bed. There is a lot to adore if you weren’t being so flustered with your current situations.

Like all games, there are challenges as well. These give you the chance to do levels without certain things – powers, guns, boosting, etc. These seem to unlock outfits and give bonuses here and there, but seem to be for the thrill more than anything. There are also time trials, gauntlet runs and marathons (for those who like punishment over long periods). Multiplayer fans will have to be satiated with trying to beat other players times as there are no competitive multiplayer maps. 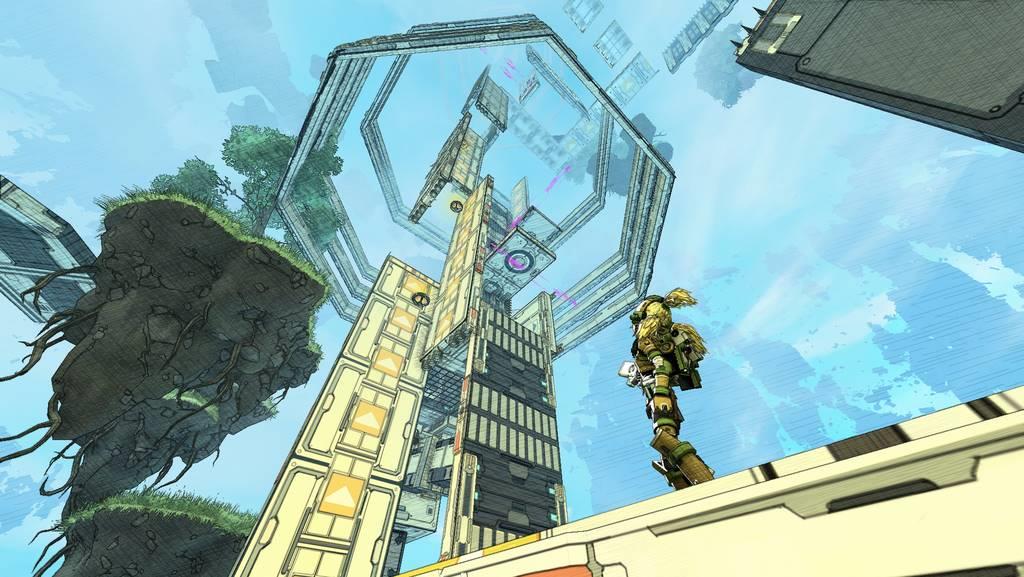 Like any game there are drawbacks, and this one has them is spades. The story is a bit problematic. The idea of a girl being crushed and then trying to find her memories is fine, but the little info that you get at the end of each level is almost as bad as a cupcake for your birthday. You may see a door that says “reflection” but the example at the end has little insight into things and is full of fluffy words that sound good but give you nothing.

The level layout is also repetitive. After 6 or so doors, you begin to get tired of seeing the same walls in different curves with the same design, spikes and plant life. Don’t get me wrong, the designers made something very pretty to behold, but it is the same thing every time. The difficulty also gets to the point of being obnoxious as well. There are levels that are really fun to do, and then there are some you want to give up completely on. My son is a hardcore parkour player and he was having fits on the harder levels. The last thing – which is fixable – are the controls. The starting controls didn’t match any that I was used to. The game wants you to hit left bumper to jump. I have never used a bumper for anything "movement". I used these for 2 levels until my son pointed out you might be able to fix them. Sure enough I put things where I was comfortable and it was 200% better.

All of the above said, this is a very challenging and entertaining game - especially for those who like the type of play. You will not come away with any brilliant insight from what the girl tells you. You won't get any special gun that destroys the end "bad guy". You won't even have a whole lot of reason to replay the game. You will rumble through a lot of ignorantly challenging levels and feel a certain pride for eventually overcoming that one place that is so ridiculously difficult, that you wouldn't ever believe you'd break through. Oh.. and you will do it for a modest cost as well.

At the end of the day, Super Cloudbuilt is a well-designed and challenging game that just needs some minor tweaking to be a major player. The story is just uninteresting and the rewards for completing the levels of the game are lousy. There is definitely enough here – 4 branches of 9 or so levels, plus a hoard of challenges – to keep a parkour person happy... just don’t look for a higher meaning.