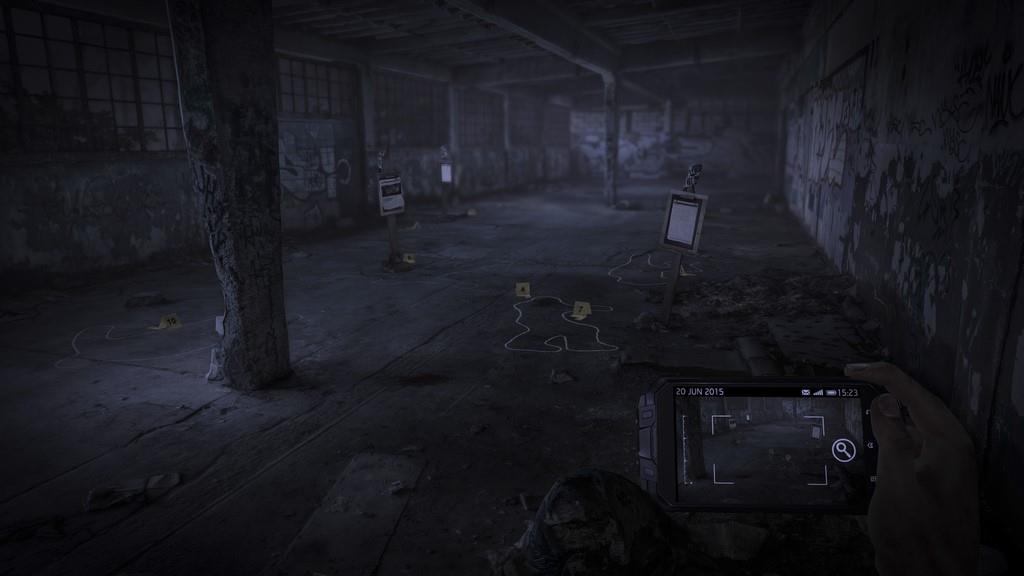 Get Even is a new game by Polish developer The Farm 51. The game works hard to tell a gripping story with themes of memory, mild horror, and psychological terror -- but there’s something missing from Get Even at almost every turn. The kind of polish the game lacks is comprehensive, affecting the game’s narrative, playability, level design, sound design, AI, and more, while still providing an enjoyable gaming experience. This is because Get Even is an intriguing psychological-thriller on clunky FPS rails -- a rich, detailed story muddied by its own interest in being something else.

In Get Even you play as Cole Black, a gruff Brit not unlike a chain-smoking Jason Statham. Black wakes up in an abandoned asylum, with only one memory – trying to rescue a girl named Grace with a bomb strapped to her chest. A mysterious person named Red, strapped a VR headset to Black’s head, which is used to relive memories, and piece together Black’s lost past. One of the game’s greatest strengths is the initial pacing. The first few hours are terrific at the slow drip in storytelling, only aided by the simple, but effective, level design in the asylum. There is a really cool clue-gathering mechanic as well that allows you to piece the story together as you play, should you be curious. But the game’s narrative, by virtue of narrowing towards the end, reveals its thematic loose ends.

The issue isn’t that it takes multiple play-throughs to get the whole story, it’s that it takes multiple play-throughs to understand some larger thematic ideas and why certain story elements even happen. You get the whole narrative, but many of the threads introduced, and one major (and I mean major) conceit feel needless, and, frankly I have a sneaking suspicion that they are. There are a couple of conclusions I could draw, and if you want to DM me (@PatchesAloha on Twitter) I’ll give you the spoiler version of my concerns, but let’s just say the story strains itself in too many directions for the sake of shock, horror, and tone. This kind of stretching is fundamental to understanding the rest of the game’s problems. 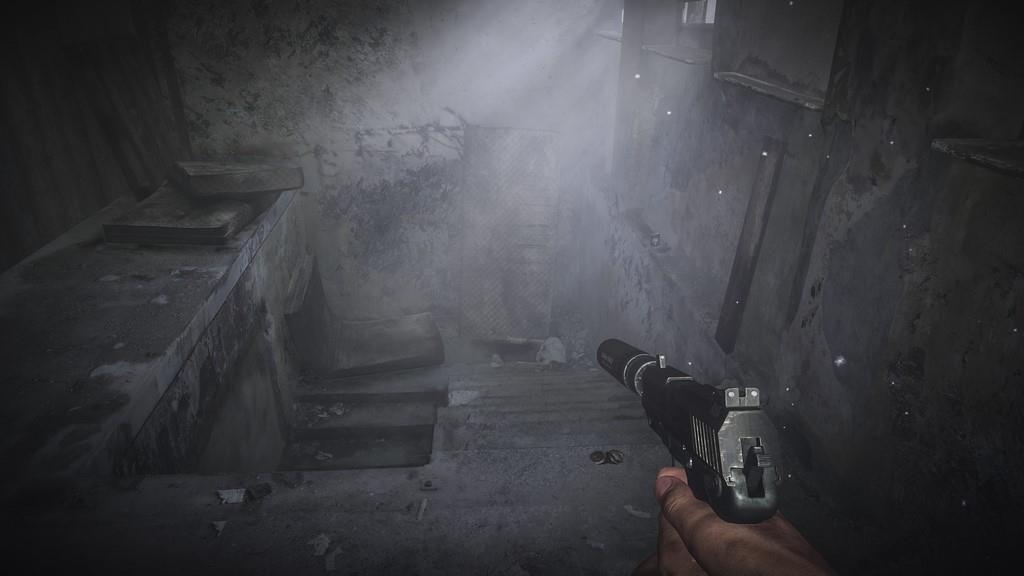 The game’s basic loop involves walking around the asylum with a silenced pistol, learning more about how the asylum works and who Red is and why they’re leading you down this bizarre path, and entering into your memories to try to access the meaning of your stay at the asylum. These memories feature mercenary enemies provided by your mind, which doesn’t want you to see certain memories in an attempt at self-preservation. You will have to defeat them, avoid them, and work to get to gaps in your memory and revive them so that you can remember your past, and Red can collect the information they need. You frequently use a smartphone as your UI, and as a nifty utility belt of sorts. It can scan inconsistencies in your memory and read details in situations to provide new information, exits, and even cover when enemies surround you. It has a UV light and Infrared light that are used for solving puzzles and, for the latter, seeing enemies. When attached to the Cornergun, it truly reveals how impressive it is.

The initial pacing in the game rewards the unique mechanics involving the Cornergun and the smartphone, teasing you with clues, trippy environments, and new mechanics each of these items can accomplish. It’s exciting to be a part of this mystery when it first begins, and that’s all to the game’s credit (and the very solid voice work). However, as the game goes on, and the story’s focus becomes more obvious, the Cornergun reveals its limits, and the smartphone loses some of its allure. This is because the game’s pacing really slows in the middle, and we have a few elements of the story, again, that feel underdeveloped and pointless. 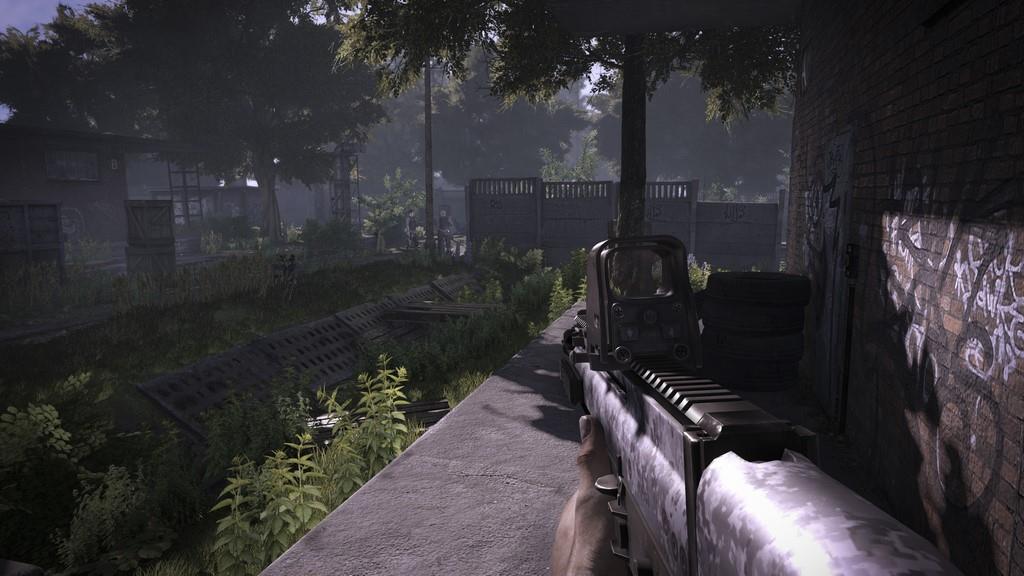 This relates to the larger “gamefeel” of Get Even, which is sub-par. Everything functions, but nothing feels terrific – even if the way we use something like the Cornergun or the smartphone is terrific, it still feels too floaty, or a bit messy on the keyboard.

When the game enters into combat sequences, that mediocre gamefeel goes from a nuisance to a pain. When you dive into your memories you use the Cornergun, one of the game’s arguably needless but very cool McGuffins. By pressing Q or E, the gun completely bends left or right (or up, over cover), and uses the smartphone embedded in it so you can see around corners and anticipate enemies. It can have a variety of weapon attachments, and allows you to use the game’s smartphone for things like scanning and reclaiming memories, and UV lighting, and infrared vision, all things that are used very frequently in the game’s excellent exploration.

The Cornergun functions great except when you’re in an actual firefight. Because of the way the gun is designed, you can’t see down the barrel of it, and this would be fine if it weren’t the most important gun to have in the game. It’s better to use an actual assault rifle in a firefight, which you have to seek out, and instead using the Cornergun for very cool but lazily designed stealth combat. These firefights are also not as intelligently designed as the exploratory portions of the game, which speaks to a lot of the game’s design issues. 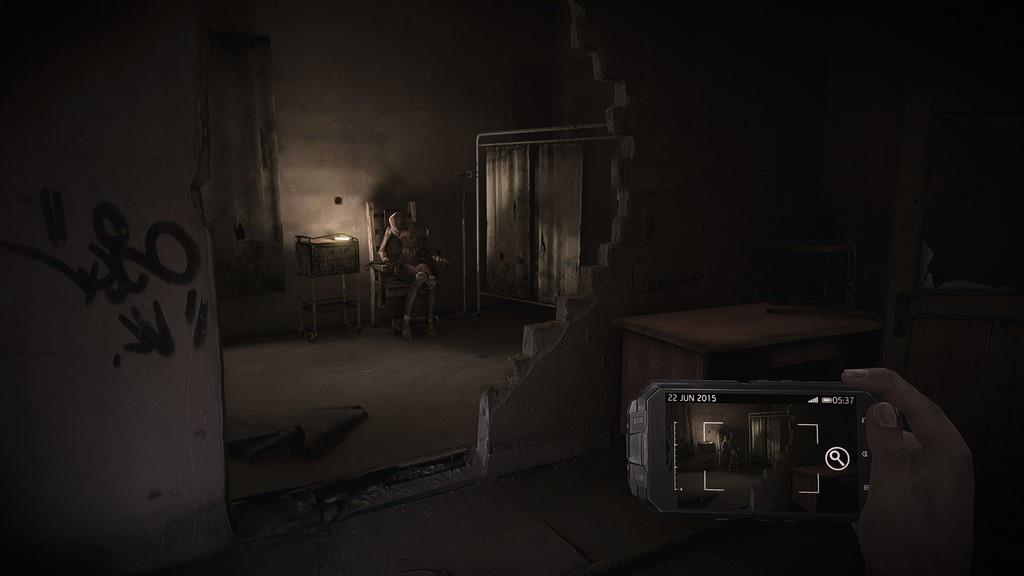 The general design of the game is really admirable, even if it stumbles in the firefights re: level design. The game is good at building tension, particularly in the asylum, and at creating visually interesting scenarios and ideas with the themes of memories. For example, portions of the game where you are traversing this black space, stopping at different moments in time in your life are begging exploration by using blunt design cues (each moment has its own space, to get to the space you have to follow a wood floor pathway between each space, which only appears if you walk in the correct direction) that add up to something more interesting in the context of exploring the game’s mystery.

There’s a careful, patient attention to detail in each of the notes and clues you find, and the few puzzles the game offers standout as satisfying brainteasers. The sound design is terrific for, again, building tension, as well as eerie motifs – the click of tock comes back multiple times, horrifying whispers and electronic tinkling signal different, but very distinct, situations. Get Even really shines in this way, and it makes me genuinely happy thinking about some of the more gripping portions of the game. The graphics are serviceable, if a bit underwhelming when it comes to human models, but it’s no great detriment. The game really excels at sucking you into this world of mystery and asking you to keep exploring and learning about the story, even if the game loses some of its great pacing halfway through, leaving us dry. This pacing doesn’t totally effect the level and sound design, it just dulls their effects since it’s the only thing that keeps us hooked since the story sort of runs its course.

Get Even completes its overall thesis, but its thesis is incredibly muddled. It seems that Get Even is forcing itself to be a shooter, and a psychological horror, and a mystery. It doesn’t do the first one well, it does the second one verywell but only really ties some of it to the main themes, and it excels at the third one but fails to properly pace it. Get Even is an example of a game that succeeds, despite being mildly embarrassed by its strengths, but it makes me want to play a game by The Farm 51 with even less combat, if any, and more careful attention to storytelling and pacing.

Get Even works hard to tell a gripping story with themes of memory, mild horror, and psychological terror -- but there’s something missing from Get Even at almost every turn. The kind of polish the game lacks is comprehensive, affecting the game’s narrative, playability, level design, sound design, AI, and more, while still providing an enjoyable gaming experience. This is because Get Even is an intriguing psychological-thriller on clunky FPS rails -- a rich, detailed story muddied by its own interest in being something else.